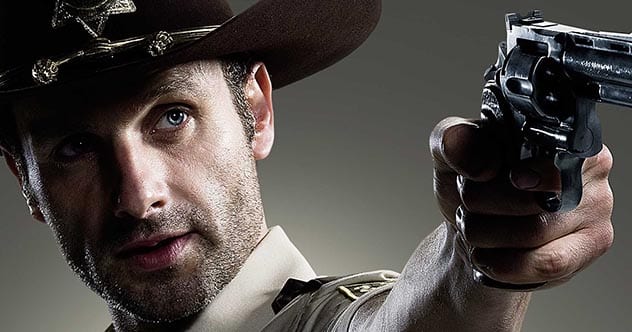 TV, they say, reflects society, but sometimes, what it really reflects is the ideas of TV execs.

Some TV execs are obsessed with diversity, equality and the future of the planet.

Which is a very good thing. Sometimes, however, TV execs are just aware that these ideas are trendy, and think they can use them to boost ratings. That’s sort of OK too, we guess.

But, instead of creating new shows to explore these important themes, they try to make their current TV shows reflect them instead, even when they’re not a comfortable fit. And the screen writers, who have to do as they’re told, don’t seem to put much effort into it, either. It’s almost as if they don’t really care.

Here are 10 ways in which popular TV shows were ruined by someone’s bright idea.

10 Hey, Transgenderism is Trendy, Let’s Do That

Transgenderism is a hot issue. Everyone seems to have an opinion on it. So why not introduce a transgender character in every show? We can show that transgender people are just the same as us, and deserve to be treated with dignity and respect.
Great.

Oh, but wait. What if we have a show where none of the characters treat anyone with dignity and respect? Like Shameless, for example. The story of an alcoholic father, and his dirt-poor family, Shameless was famous for being unwoke. Even the show’s gay characters find ‘way-out-there’ concepts like bisexuality difficult to deal with.

Never mind, press on. We can make the transgender character explain transgenderism to the gay guy, in a nightclub, while he fondles a prosthetic penis. That will get the dignity and respect message across.

And if you’re confused about gender pronouns and want to know more, check out the video above and all will be clear . . . or not.

9 Diversity is good, Here’s a Lesbian

When TV characters abruptly change their sexuality, viewers are apt to find it a little bit disconcerting. Sure Ellen Degeneres did it on her show, but then that was a sit-com based on her life and personality, and Ellen came out in real-life at the same time, which is understandable (although her show was cancelled a season later).

But Veep’s motives seem harder to fathom. Sure, its tough being the daughter of a Vice-President. Makes dating difficult. Maybe it was that.

Or then, again, there aren’t too many laughs to be got from a heterosexual relationship.

I know, let’s make her a lesbian.

Sarah Sutherland’s character swerves from being engaged to a man to dating her mother’s female security guard without any character development in-between, and barely pauses for breath before the affair is spun to benefit her mother’s political career.

It’s almost as if the writers had some really funny gay jokes and just needed a gay character to hang them on.

8 If stupid is funny, stupider must be funnier, right?

You create a character with an idiosyncrasy, and its funny. Ned Flanders is a nice but slightly holier than thou neighbor – let’s make him a rabid bible-thumper. But it isn’t just The Simpsons who have been guilty of flanderizing their characters.

Take Kramer in Seinfeld for instance. Kramer is eccentric. You can tell that by his funny hair. In fact, each year his hair gets funnier. Or at least higher. And his behavior moves from the merely eccentric to the downright bizarre.

Does that make it funnier? Maybe. Maybe not. But it’s more likely that some lazy writers mistook a personality trait for a personality and exploited it for all it was worth.

7 I know, Let’s Do Politics, We All Agree on That

Some programmes are born political, and some have politics thrust upon them. When your program is a buddy sitcom with a straight, and vapid, Jewish interior designer and her WASPy gay, and obsessive, lawyer roommate, the politics aren’t always obvious. A life-style comedy, about living in ’90s New York, Will and Grace was smart and funny and successful for 8 seasons.

And then they brought it back. For one night only, Will and Grace did politics. Up until then the show was, if anything, anti-political. The characters were too self-centered to be politically active, though they occasionally pretended to be.

The awkward 10-minute Will and Grace special made the assumption that their audience were all progressive Democrats, and the show was proudly anti-Trump. Which is a bit of a leap. While previous shows had dropped in the occasional joke about conservative attitudes and politics, this reboot was a flat-out party-political broadcast.

While the reboot was a special, and not a regular episode, no one looked comfortable. The humor, where there was any, was forced, and even the canned laughter seemed strained. Which was unfortunate, because the special was the beginning of a Will and Grace reboot which tried very hard to tone down the politics but couldn’t quite manage it for two whole seasons (with a third coming up). Not surprisingly the total audience for the politicized series’ was less than one third what it had been for the original ’90s series’.

6 Hooray, We Reached Our Goal, Now Let’s Pretend We Didn’t

Some TV shows have concepts which are open-ended. Others have a clearly defined goal. Take Prison Break for example. Series 1 is all about 2 brothers trying to break out of prison. The concept is in the title, for goodness sake. So when, at the end of season 1, they manage to break out of the prison, it’s job done.

Switch off the lights and go home.

But the series was a success, and a successful series cannot stop at season 1. So, what do the writers do then?

They have a season of Lincoln and Michael being on the run, and then for season 3 they stick them right back in prison again.

At which point, the audience switched off in droves.

Prison Break is not the only show to fall for this. The premise of The Mentalist was that Patrick Jane, as played by Simon Baker, is helping the police with their cases, whilst also using them to help him catch the man who brutally murdered his wife and child. Every few episodes, he reminds the team that that is the only reason he is there.

Half-way through season 6, they catch him.

Then Jane takes a holiday, and comes back to work for another 27 episodes.

10 Episodes That Were Banned From Television [Videos—Seizure Warning]

5 I am Woman Hear Me Roar

Feminism. It’s been around for a while, but it still seems to confuse screenwriters.

Take Supergirl, for instance. Already on dangerous ground, for calling her Supergirl rather than Superwoman (OK, that’s down to the comic book creators, so we’ll give them a pass) portraying Kara Zor-El, Superman’s cousin, as a strong independent woman, should be easy.

After all she’s superwoman (sorry, girl).

So why does everyone on the show need to keep making speeches about how strong and independent she is? Strange.

But it’s not just the superhero shows that feel the need to portray their female characters as badass. Being a feminist always seems to mean being Strong. Male characters can be strong, too, of course, but they can be other things too.

Women just get to be strong.

And talk about it. A lot.

Remember The Fresh Prince of Bel Air? That streetwise kid from Philly who goes to live with his rich relations in Bel Air? Will Smith knows the ways of the world. He has been brought up on the Mean Streets. He knows what’s what.

And then, 3 seasons in, he is tempted to take drugs. Not so that he can party, but so he can study. Of course, he doesn’t actually take them, because he is Too Smart, but his cousin accidentally swallows some, thinking that they are vitamins, and ‘almost dies’.

The episode is even called Just Say Yo, clearly referencing Nancy Reagan’s ridiculously simplistic Just Say No campaign, and the episode feels as if it has been written by the same people who wrote her slogans.

The Fresh Prince is not alone. Programs aimed at teenagers often have characters considering taking drugs but ultimately thinking better of it, while those aimed at adults have characters who let their hair down. But only once. They smoke a little weed, and they giggle a lot, before, ultimately being sick/paranoid/locked-up, whereupon they give themselves, each other and us a little lecture about the dangers of drugs.

None of which is entertaining. Although Carlton dancing on amphetamines is.

Ah, Lost. That great writing experiment, when the writers hit on the wheeze that they didn’t have to tie up loose ends, at all. Someone noticed that TV shows get cancelled, and when they’re cancelled, no-one tells you how it ends.

Why not make the most of that?

Keep throwing in weird stuff, polar bears, for example, time-travelling conundrums, or a vague and ill-defined Sickness. Don’t worry. You won’t have to explain it.

What about some random numbers? Chuck those in too. That will keep them guessing.

Lost was not the only series where the writers pulled this trick, but they were certainly the most blatant. For 5 seasons, they allowed fans to believe that all this weirdness would actually add up to something, while they counted their money. Unfortunately for them, instead of cancelling the show outright, the network announced that there would be one final season, so that the writers could tie all those loose ends into a nice neat bow and gift them to their fans.

2 I’m not racist, I know an Indian/Asian/Middle Eastern guy

Diversity in TV is good. But the Token Asian Friend, not so good.

The Token ethnic Friend is always smart – usually a computer programmer/math genius/astro-physicist. He is always shy, retiring, and ridiculously deferential to people who are in no way his superior. And, most importantly, he never gets the girl.

Take The Big Bang Theory, for instance. Raj Koothrappali, as played by Kunal Nayyar, can’t even speak to women for 6 whole seasons. He is reduced to doing a dumb mime whenever one appears in the room. He is the last character to find a mate. Even Sheldon, the human robot, gets coupled long before Koothrappali sees any action.

Or how about Community, a sitcom based in a community college. Abed Nadir (played by Danny Pudi) is a middle-eastern film student. Which means he makes film references instead of talking to people. Because, of course, he can’t speak to people. He’s too shy.

Here’s a radical idea. Why not have an Asian/Indian/Middle Eastern character who is a bit crap at math, but has great people skills, huge amounts of charisma, and always gets the girls?

Even zombie shows can’t get away from Hollywood’s insatiable need to be on message. Take The Walking Dead, for instance. The post-apocalyptic zombie horror franchise seems to tick all the boxes.

It’s got badass (sorry Strong and Independent) women.
It’s got a militant anti-capitalist agenda
It’s got a rainbow nation of characters, both alive and undead.
It’s got a gay man and a lesbian
Even if you don’t count the zombies, the show has a high number of disabled characters
It even has an Asian friend who is more than a token.

Finally, a show that manages to put the story before message, right?

Well, maybe not. A careful analysis of the deaths in TWD have shown that as the series has developed the number of white middle-aged men being killed, has risen out of all proportion to their numbers in the post-apocalyptic society.

Is this a cynical agenda-pushing narrative? Probably.

Or, maybe it’s that the communist, feminist, homosexual, ethnic minorities are finally getting their own back?