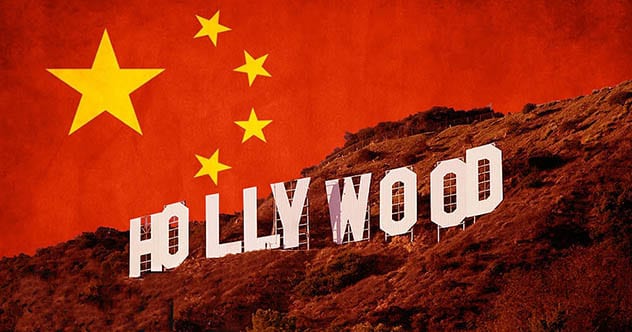 The Chinese are said to be avid movie fans, so it is not surprising that Hollywood producers would be keen to distribute their films to China, with its 1.4 billion potential cinema goers.

10 Of The Weirdest Things The Chinese Government Has Banned

And as they often do, Hollywood producers try to be aware of the different cultural sensitivities of the countries they distribute to. The communist Chinese censors are known to have particular likes and dislikes. They dislike talking animals and ghosts, for example. And they are so sensitive about their lack of tumble-dryers, that the makers of Mission Impossible III cut a scene where Tom Cruise runs through a line of washing in Shanghai. Here’s 10 of them.

The Chinese censors have a whole list of things that they don’t like, that might be surprise western cinema goers. Talking animals are out, for example, as is anything to do with ghosts.

Movie execs have started to make a different cut suitable to Chinese tastes. Take Django Unchained for instance. The Tarantino film was always going to be a difficult sell in China, because of their aversion to graphic violence and nudity. So a torture scene of a naked Django and his wife being tortured had to go, as did the flashback of a slave being mauled by dogs. Did it help? Not really. The movie did get a limited release, but was quickly pulled from theaters.

The Chinese censors also dislike any scene in which a Chinese character gets the worst of it in a fight. In Skyfall, the scene where James Bond kills a Chinese security guard is cut entirely, as is the Chinese prison scene.

Normally, Disney movies are a certainty for distribution in China, with their family friendly films. However, the censors took exception to the movie Christopher Robin, a harmless fantasy, starring Ewan McGregor as the grown-up Christopher Robin who has forgotten his childhood companions, Winnie the Pooh, Piglet, and Tigger too.

The reason for the lack of distribution may lie in the fact Winnie the Pooh is seen as a dangerous and subversive character in China. Pooh’s revolutionary tendencies came to light in 2013 when a picture of the Chinese leader Xi Jinping walking next to President Obama, was shared online, next to a picture of Pooh walking side by side with Tigger. Oh boy.

Since then, the Chinese president and Winnie the Pooh have featured in a number of memes and the bear has become a ‘symbol of dissent’.
Christopher Robin was a non-starter.

One thing that is certain to get a movie on the no play list is any mention of Tibet. Censors operate a strict See no Tibet, Speak no Tibet, Hear not Tibet policy. This can be tricky for movie producers. Obviously, Seven Years in Tibet, had no chance of getting a release. That movie, however, caused China such offence that they banned the director, Jean-Jacques Annaud, of its stars, Brad Pitt and David Thewlis, and the entire Sony Pictures distribution company were banned from ever entering China again.

Sometimes, though, compromises are reached. Take Doctor Strange, for example.

In the graphic novels, on which the Marvel movie was based, The Ancient One is a Tibetan mystic, hailing from the fictional Himalayan region of Kamar-Taj. In the movie, TAO is a Celt. Ah yes, the Celts. Famous the world over for their mysticism and Himalayan ancestry.

7 Make the Chinese Guy the Hero

Flattery will get you everywhere, it seems. The Chinese are no exception. If you can show the Chinese as heroes, you are much more likely to get a distribution certificate, than if they are the villain.

In The Martian, for instance, the Chinese space agency comes to NASA’s aid, and helps rescue the American astronaut who has been left stranded on Mars, thus demonstrating that the Chinese Space Agency is superior to their American counterparts.

The decision certainly paid off, because The Martian took $50 million in its opening weekend in China.

6 Make It a Travel Show

Lots of films are glorified travel shows. Production companies can get financial incentives to film in certain countries, and generous tax breaks and cash rebates certainly influence the decisions about location shoots.

In return for the bucketful of cash, the director provides enticing backdrops and a 2-hour long showcase of the area. Most of the time these decisions have little effect on the audience and can even slide by unnoticed. After all, one beautiful old city is much like another, right?

Sometimes movies are a little less subtle. Take Looper, for example. Joseph Gordon-Levitt is learning French. ‘Why the fuck French?’ asks Jeff Daniels. Gordon-Levitt, in a beautiful Bruce Willis impersonation says, ‘I’m going to France.’ Which seems reasonable. But, says Daniels, “I’m from the future. You should go to China.”

The message is clear. “China may not be where it’s at now, but it’s where it’s going to be. Can we please have distribution rights?”

5 Gratuitous Product Placement Even When It Makes No Sense

Product placement has long been a feature of feature films. After all, it’s a great way to offset some of those pesky production costs, right? And, if you can use your product placement to ingratiate yourself into a closed market like china, so much the better.

So, in Iron Man 3 we see Dr Wu drinking some Gu Li Duo milk before he operates on Tony Stark. Which was timely, because China was, at that time, needed to restore confidence in its milk production after reports that it had been contaminated with mercury.

The film also opens with a question on a screen card. “What does Iron Man rely on to revitalize his energy?” After a 3 second blackout, the answer appears. Gu Li Duo, obviously.

If you are wondering how you missed that bit of product placement it is because, unless you are in China, you didn’t see it. Extra scenes were added to the film, around 4 minutes in total, all of which was used to increase the presence of Chinese actors, or peddle questionable milk drinks to a wary public.

The producers must have wanted to get into China real bad, because the film also features 2 Chinese supporting actors, a shot of some cheering Chinese schoolchildren, and product placements for a Chinese electronics company and a construction company. They also changed the movie’s bad guy from The Mandarin, as stated in the graphic novel, to an English guy pretending to be a mandarin. Come on.

4 Blame It On the Russians

The trouble with films based on comic books is that the source material is not always as commercially driven as the film industry. So they can blame China for, say, a killer virus, without a second thought.

Movie makers, however, have a different set of priorities. When Paramount Pictures hired Marc Foster to direct World War Z, they probably already had distribution rights in mind. So, they changed the origin of a zombie virus from China to Russia, because a) whoever heard of a virus emanating from China and b) the Russian market is much smaller.

But they might as well of not bothered, because they didn’t get a distribution in China. Or Russia either. Obviously.

In 2012, MGM put out a remake of Red Dawn. The original 1984 film had starred
the unlikely combo of Patrick Swayze and Charlie Sheen as brothers who take a break from High School to organise a resistance against the impending Russian invasion.

OK, sure, it’s not the greatest movie ever made, and the final scenes are beyond cheesy, but, for some reason, someone thought a remake was a good idea.

This time the brothers are not high school kids, but a marine on home leave (played by Chis Hemsworth) and a football player (Josh Peck). Slightly less ridiculous.

And the army was not Russian, it was Chinese. I mean North Korean.

After principal photography was complete, the studio realized that having China as an aggressor might not play well in China, so they spent a ‘considerable’ amount of time, and money, to digitally alter the invading army’s uniforms and insignia.

Because North Korea does not distribute Hollywood movies, so who cares about them, right?

Didn’t work though. The film was never released in China.

One way to ensure that you get that all-important distribution deal is to work in partnership with the Chinese film industry, and even shoot the movie there.

The Transformers franchise was always popular in China, so when it came to making Transformers: Age of Extinction, they decided to collaborate with Chinese production companies to really make the most of their opportunities.

The movie financed in partnership with China, it was partly filmed in Hong Kong, and it included a ton of product placement, including for a soy-milk drink (in case you didn’t want to drink actual milk, for some reason), and the Chinese version of Red Bull.

Though the movie was terrible (no surprise there), it did make a lot of money. Most of it in China.

In fact, the movie made $300 million in China, $50 million more than in the US, and almost a third of its eventual $1 billion revenue.

Because doesn’t everyone want to see a movie in which autobots ask a mechanic (played by Mark Wahlberg) for help to defeat a bounty hunter who is out to catch Optimus Prime?

Sometimes when you tinker with a film it makes little difference to the finished product. After all, who cares what brand of milk the hero drinks? Most audiences barely even notice that stuff.

Occasionally, however, the changes are so great that the film is barely recognizable. Take The Karate Kid, for instance. Not the 1984 awesome Ralph Macchio, Noriyuki Morita classic, but the crapola 2010 Jayden Smith, Jackie Chan remake.

The original film was set in Los Angeles, where new kid on the block Macchio falls foul of a black-belted karate chopping bully who happens to be the boyfriend of the girl Macchio likes. He recruits his caretaker-cum-karate-master to help him prepare to fight him.

The film should have been easy for the censors. It was filmed on location in Hong Kong. It had a load of Chinese actors, and as much product placement as you could eat. It was heavy on Chinese scenery, even showing Jayden and Chan doing their Rocky style training on the Great Wall itself.

But the censors didn’t like it. The Hong Kong setting meant that the movie’s bully was Chinese. An older Chinese kid beating up a scrawny American kid did not play well.

So, after all that effort, it looked as though The Karate Kid might not make the cut.

In order to get it through, the film underwent some rather brutal cuts, which changed the story entirely. The gladiatorial element of the film was cut, and instead it became a nice coming of age, getting in touch with your feelings, type movie.

Oh, and it was given a new name too. The karate kid was now a Kung Fu Dream.