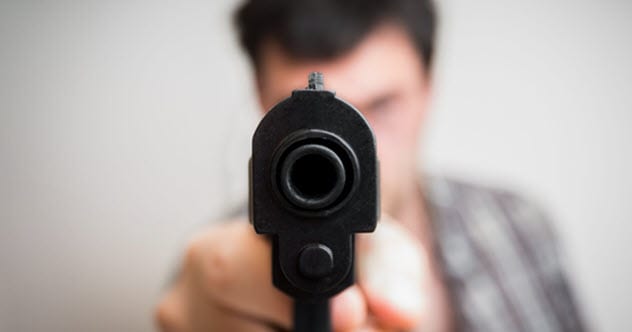 We have all been on the receiving end of bad customer service. Whether the reason is valid or not, it sucks when a store has just run out of the very thing you raced over there to get.

It’s also annoying when the line is moving at a snail’s pace or when the clerk has no idea what he’s doing. We may get a little huffy and shoot the clerk an angry look or two. But generally, we don’t actually, you know, shoot.

The same cannot be said for the following list of fast-food customers. They lost their cool . . . and their minds.

8 Man Melts Down Over No Ice Cream 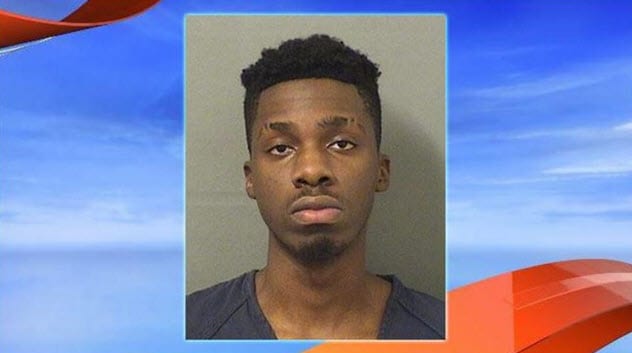 Some of us, most especially Jerry Henry, love ice cream a little too much. Back in August 2017, Henry pulled up to the drive-through window of a local McDonald’s and ordered some ice cream. When the person working there informed Henry that there was no ice cream because the ice cream machine was broken, Henry reacted in a unique way—he pulled out a gun.[1]

The terrified drive-through worker called 911 and ran to the bathroom to hide.

When police arrived, they discovered that the gun was an AR-15 airsoft gun that resembled the real thing. They slapped the cuffs on Henry and charged him with improper exhibition of a dangerous weapon or firearm.

Of course, some deranged people are more creative when they get mad around food. Trust us when we say you don’t want to deliver bad news to a crazy person with a slice of pizza. You can read more at 10 Crazy Times People Used Food As A Weapon. 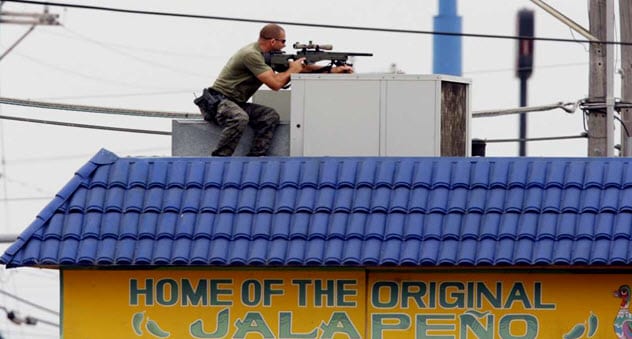 In December 2013, a man pulled into the Rigsby Road Taco Bell drive-through in San Antonio, Texas. He ordered seven Beefy Crunch Burritos. The employee informed the man that the price of each burrito had just gone up to $1.49 from $.99. That’s when things went from okay to full-blown crazy.

Angry about the price increase, the man shot an air gun at the manager while showing off an assault rifle and a pistol. But the crazed consumer didn’t stop there. When the police arrived, he pointed a weapon at them, which caused the officers to open fire. The man raced away with police in close pursuit.[2]

Manager Brian Tillerson explained, “He pointed a gun at me, and he fired it. I leaned to the side and there was a pop, but nothing happened.”

Police followed the burrito bandit to a hotel. There, the Terror of Taco Bell barricaded himself in his room. SWAT negotiators were called to what turned into a three-hour standoff—all because of a 50-cent price hike on a man’s beloved Beefy Crunch Burrito.

In the end, Ricardo Jones was charged with two felony accounts of aggravated assault against a public servant. We’re not sure why criminals love their burritos so much, but some even call the police on themselves after eating. Read more at 10 Foolish Criminals Who Called The Police On Themselves.

6 No Fried Mushrooms Leads To Shooting

Picture this: You go to a fast-food place eager to chow down on your favorite menu item only to be told that they are all out of it. Naturally, you are upset. They say they carry it, yet you cannot get it. Frustrating.

Now picture this: You go to a fast-food place eager to chow down on your favorite menu item only to be told that it is not even on the menu. Different scenario. Frustrated, but you made a mistake. They do not even carry it. It is on you, right?

Don’t tell that to two men and a woman who took a trip to Nicky D’s Coney Island fast-food restaurant in Detroit in June 2019.

Angry, the trio left Nicky D’s. Sadly, the story does not end there.

About 20 minutes later, they returned and started hitting customers with a nightstick. One of the three then took out a gun and shot a customer in the face.

An employee could not believe that a regular got shot: “The guy didn’t do nothing. He comes here every day, he don’t do nothing to nobody, say nothing. He just orders a cheeseburger plain and leaves.”[3]

A few days later, a pair of 61-year-old twins was arrested. Thankfully, the customer shot in the face was not killed. He was said to be recovering from his injuries. We don’t really understand the anger over mushrooms, but maybe it had something to do with the 10 Effects Of Magic Mushrooms On The Human Brain.

The popular Popeyes restaurant chain apparently had a hit with their chicken sandwich in summer 2019. By August 28, the company announced that demand was so high that they would be sold out by the end of the week. Customers would just have to be patient. Most were—Joshua Robicheaux was not.

Joshua and some friends pulled up to a Popeyes drive-through in Houston on September 2 and ordered some chicken sandwiches. They were told that the chicken sandwich was sold out. This did not sit well with Robicheaux.

According to court records, after trying to get in the lobby, Robicheaux allegedly showed a firearm and said, “I’ll shoot this (expletive) up.”[4]

The manager also told the police that she thought Robicheaux was under the influence. The lengths to which people will go to get chicken is not the only astonishing info we’ve published about poultry at Listverse. Discover more at 10 Surprisingly Interesting Facts About Chickens.

In July 2019, a McDonald’s in Georgia apparently could not keep their french fries warm—at least not to the satisfaction of one Lillian Tarver.

Tarver was so upset that she returned to the McDonald’s and demanded satisfaction. When the manager went into the back to get her a fresh batch of fries, Tarver lost it. She headed straight for the kitchen and got into a brawl with employees.

One employee, Lynn Watson, said, “We were physically fighting because I had to grab her because she was putting up a set like this, and I had to seize my moment when I knew I could. When she bent down, I grabbed her hair and just started slinging her across the floor.”

Thankfully, Tarver shot at the floor instead of at the employees. The owner gave her a refund, and she left. Tarver was arrested shortly after. Unfortunately, McDonald’s has been the scene of the crime more than once. You can discover the chilling details by clicking on the 10 Worst Crimes To Occur In A McDonald’s. 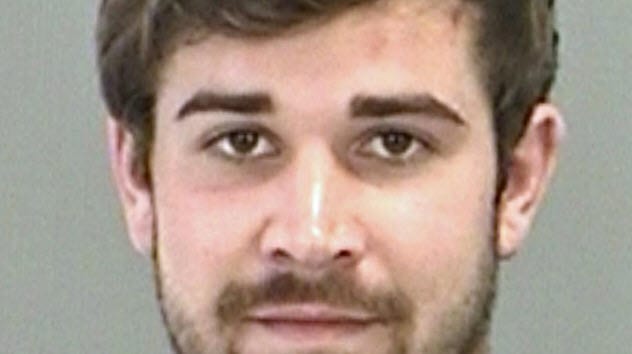 Being out late at night while hungry can be a frustrating experience. Getting tired when food is hard to find can drive you a little crazy.

That must have happened to 21-year-old Kenneth Reese of Texas. Out at 1:00 AM with a female companion, Reese decided to try to get some Taco Bell before the restaurant closed. Unfortunately, he was a bit late.

Then, even more unfortunately, he allegedly said something about “shooting up the place.” If that wasn’t enough, as Reese and his female companion were leaving, he pointed a gun at an employee.[6]

Thankfully, no shots were fired and Reese was arrested shortly thereafter. He was charged with aggravated assault and a DUI. But it didn’t have to be that way for young Reese. He could have followed the “highly” successful examples of these 10 People Who Did Great Things While Intoxicated.

Drive-through windows are supposed to be for those in a hurry. These customers need to get somewhere quickly and have no time to park, get out of their cars, and walk into the place to order.

Sometimes, though, drive-through lines can be slow and you just have to be patient.

That was not the case with Marquenta Glidwell. In mid-2019, she was angry and just kept honking her horn. So much so that the manager of the McDonald’s had to tell her to cool it. But Glidwell did not cool it.

Getting out of her car, she approached the drive-through window and hit the manager with her credit card. Then she used her stun gun on him. McDonald’s manager Jacob Jordan described the bizarre and harrowing assault: “At first, we thought it was just scratch marks from her fingers until you look at the video, and you can clearly see her trying to jam the taser into my throat.”

Glidwell eventually accused Jordan of voting for President Donald Trump even though Jordan was not old enough to vote when Trump was elected. She also apparently made some homophobic remarks—Jordan is gay.

The crazed customer ended up in jail on a $10,000 bond. Fortunately, all the McDonald’s employees and guests were okay. That hasn’t always been the case as you’ll discover when you read 5 Gruesome McDonald’s Murders.

Apparently, cutlery is really big in Georgia. At least, it’s a big deal for Jonelle Jade Dare, 33, of Marietta, Georgia.

In October 2019, Dare was visiting Kentucky when she decided to pick up something at a local KFC drive-through. After she received her meal, she drove up a few feet, pulled out a gun, and fired into the drive-through window. People who witnessed the incident said that Dare was angry that she hadn’t been given a fork or a napkin. Luckily, no one was injured.

Charlene Witt, the manager of a Subway restaurant located right across the street from the KFC, was shocked when she heard of the incident. Witt said, “I had a regular customer come in and say, ‘Did you hear about what just happened at KFC?’ I was, like, ‘No.’ He was, like, ‘Someone just shot the window out over here.’ “[8]

Thankfully, police picked Dare up a short time later. The gun matching the description of the one used at the scene was also recovered. It’s hard to believe that someone could get that worked up about a missing napkin. We shudder to think how Dare would have reacted if her order had contained one of the 10 Most Horrifying Things Ever Discovered In Fast Food.

About The Author:Domenico De Luca has been writing for 30 years, with screenplays, short stories, and songs making up the vast majority of his output. He is a film buff with his very own blog called so many films, so little time. He is also a music addict and devoted lifelong fan of the Toronto Maple Leafs.