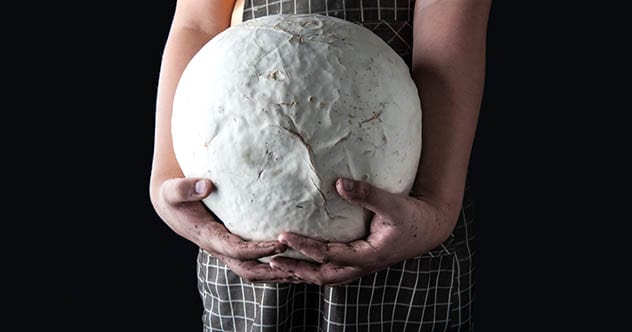 Mushrooms and fungi are very familiar to most of us, love them or hate them, they’re known to most for their culinary or medicinal uses, or perhaps as annoying mould or the yeast we use to bake. It’s a safe bet to assume that nearly anyone’s heard of them, seen them, used them, tasted them, however, these ones are vastly different, steering further into the realms of fantasy—horrifying, interesting, or just plain weird.

Top 10 Life-Forms That Belong In A Horror Movie 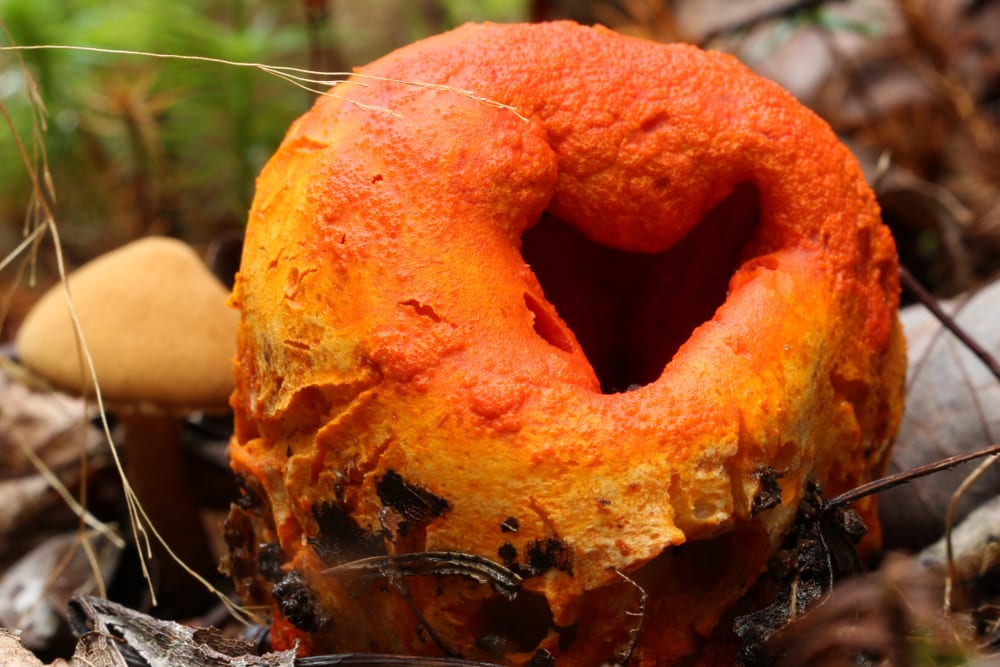 Despite what its name would suggest, the lobster mushroom is actually not a mushroom, at least, not entirely one.

Hypomyces lactifluorum is actually a species of mould, a bright orange, parasitic fungus that spreads over its naturally white host and transforms its appearance into something which is a lot more vivid—like a lobster!

They prioritise Russula or Lactarius mushrooms and they’re, in fact, known to produce an allegedly extremely delicious combination! The name “lobster mushroom” certainly sounds appetising, though you’d be forgiven if you weren’t that enticed by the mould part, but generally speaking, a parasitically transformed orange mushroom which smells like shellfish, and in Lactarius’ case, transformed from a hot, peppery mushroom into something mild and delicious, is possibly one of the coolest things one could eat.

Some level of care is advised though; while mushrooms of the Russula or Lactarius genus are perfectly edible, it is technically possible for Hypomyces lactifluorum to target a poisonous mushroom, accidents like that are virtually unheard of but being careful is still important—never eat something you picked if it hasn’t been identified by a professional. 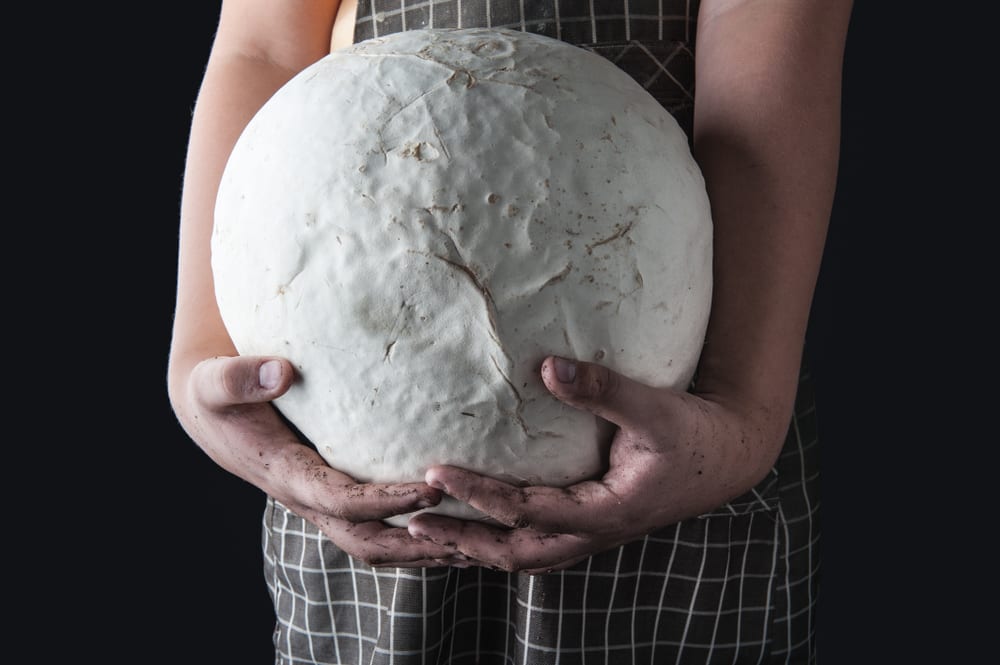 Readers from certain places of the world may be a little surprised to see the giant puffball mushroom on this list as, for how strange it actually is, it’s actually surprisingly common throughout mainland Europe, even rarely appearing in the UK!

Giant puffball mushrooms, like their name suggests, are quite massive, smooth, and a pure white in appearance, certainly befitting the title of a ‘puffball’.

These mushrooms may grow to be over a metre in diameter and may “explode” in order to spread their powdery spores contained inside.

Despite their strange description, they’re also edible and fairly popular to forage, also considered pretty safe, perhaps unsurprisingly, as not many other mushrooms could be confused with a large, white, spherical, vaguely alien-looking thing.

One thing to note though, if you suddenly have a craving for these otherworldly-seeming mushrooms, aside from taking our advice from the #10 entry, make sure the inside is a pure white, by the time it’s yellow or brown the spores have begun to ripen and the mushroom becomes inedible. 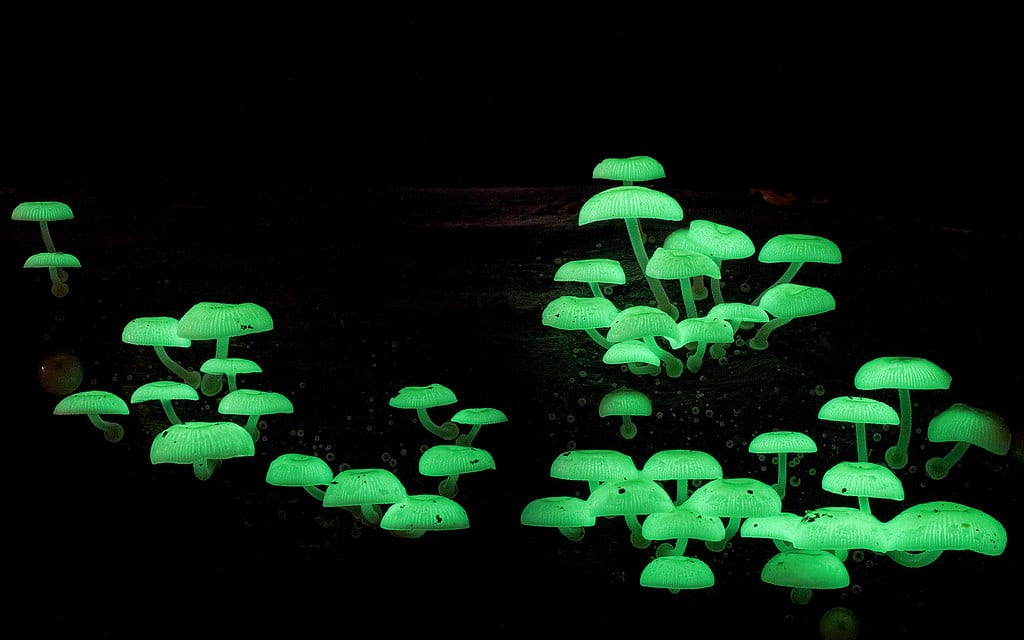 Next on our list of fantasy mushrooms is something which is perhaps more conventional looking at first but extremely interesting and, actually, beautiful!

Mycena chlorophos is a mushroom which is naturally luminescent! This small mushroom grows in groups and it emits a clear green glow in the dark, making for a wonderful sight if you happen to spot one, which, sadly, isn’t all that likely.

As wonderful as this species is, they’re still fairly mysterious and unknown, in large part due to their limited range, being constrained to certain areas of mainly subtropical Asia, though also found in tiny portions of Brazil and Australia where it was likely transported and introduced artificially.

Due to how rare and unknown it is, its edibility is unknown, however, it’s best to not get your hopes up as the mushroom is said to smell of ammonia.

They’re typically found within woody debris, and while not glowing indefinitely, it displays its beauty for about 72 hours after developing, certainly a sight to see by all means! 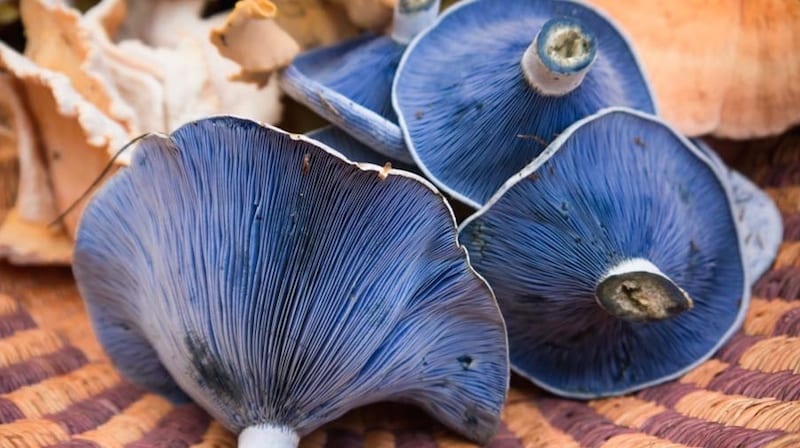 Lactarius indigo, also called the indigo milk cap, indigo lactarius, or the blue milk mushroom is a beautiful mushroom with a striking blue colour, its cap measuring up to 15 cm-s or roughly 6 inches wide, it’s frequently praised and treasured for its unique beauty and odd features, it’s sought out by edible mushroom enthusiasts as an enticing-looking oddity.

Its common name isn’t there just for show either, quite aptly, when you cut the flesh or damage the gills, this mushroom exudes a colourful, blue, milky, latex-like liquid, vastly different from the white ‘milk’ of its closest relatives.

The indigo milk cap is also mycorrhizal, just like chanterelle mushrooms, it grows close to trees and, in a mutually beneficial relationship, they exchange certain minerals and nutrients with each other!

The mushroom is also edible, though it’s generally best described as plain-tasting or even bitter, not extremely delicious or something to really seek out unless you really want to tell the story of eating a blue milky fungus. 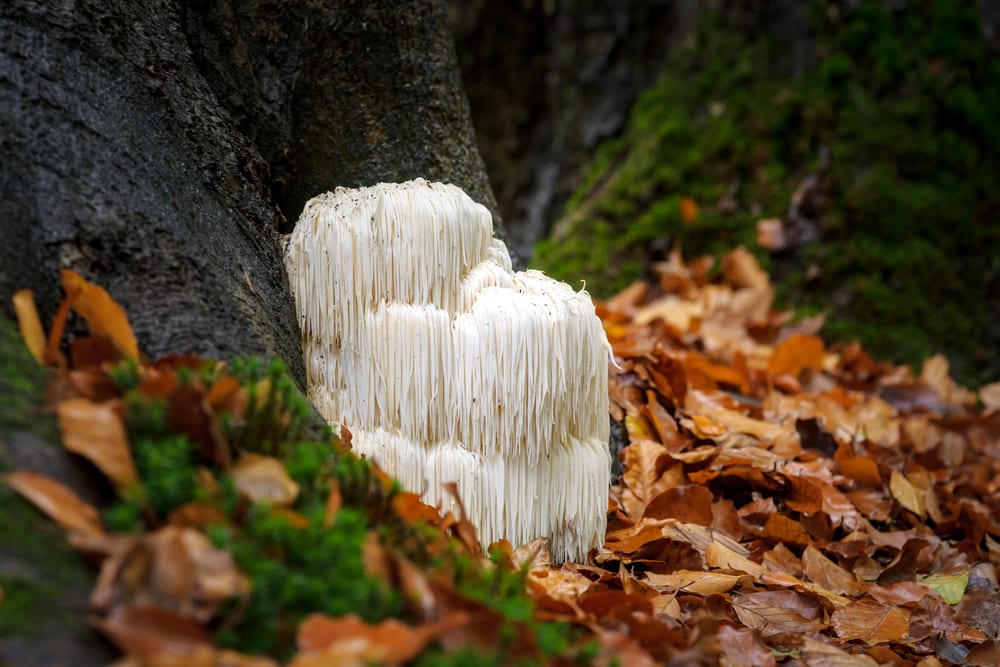 Hericium erinaceus, also known as the lion’s mane mushroom or the bearded tooth mushroom is a medicinal and edible forest mushroom found in North America, Europe, and Asia with looks that could really rival the designs of many fictional plants!

They grow on trees and appear as large and incredibly cool looking lumps on them, appearing as a cascade of spines that are sometimes likened to icicles due to their long, sharp, downwards-growing shape and typically white colouration, though eventually yellow or brown with age. As its name would suggest, it could be described as looking like a beard or an animal’s mane!

Aside from being edible and described by some as a special treat, being widely consumed in China and Japan, it also has plenty of medicinal usages dating far back in history as a part of traditional Chinese medicine. Modern research has shown that it contains compounds that are effective against memory loss, anxiety, depression, dementia, neurological disorders, and even cancer!

If a beard- or mane-looking, large, spiny mushroom that grows on trees and is both flavourful and medicinal doesn’t sound like it’s from a fantasy story then I’m not sure what does. 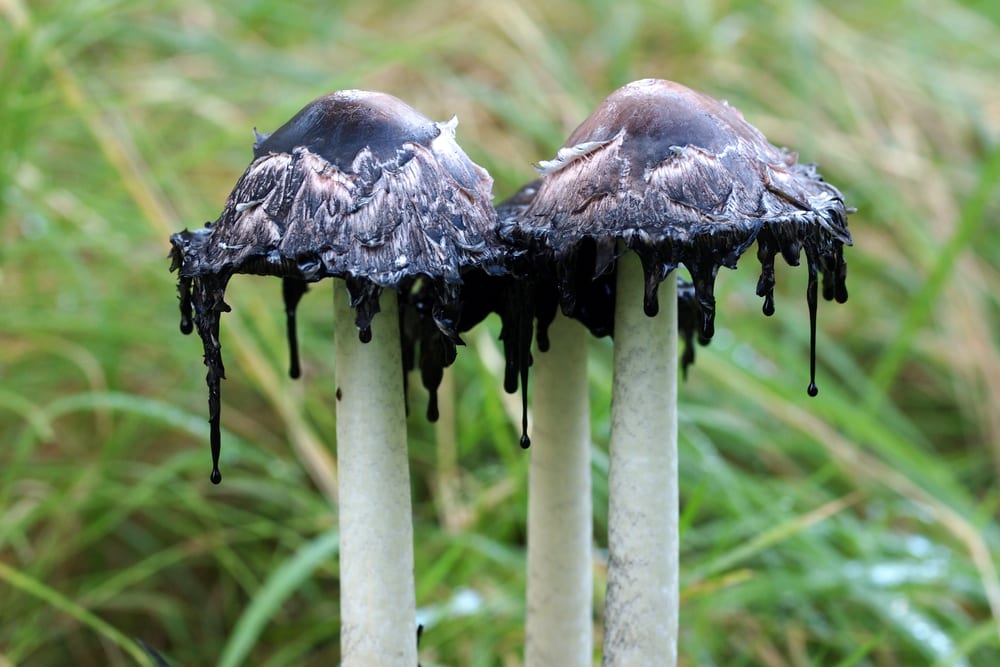 It’s certain that we’ve covered a lot of intriguing and strange mushrooms and fungi already but this one is quite special!

Coprinus comatus, or, by other names, the shaggy ink cap, shaggy mane, or the ‘lawyer’s wig’ mushroom, aside from having incredible names, is quite incredible by itself as well! It’s a reasonably common, small, egg-shaped mushroom which is naturally white and is frequently found in woods, meadows, fields, and even suddenly appearing in troops on people’s lawns!

These interesting and varied looking fungi, aside from having the habit of suddenly appearing in places and growing in troops, lines, or other various formations are also known for their colouration, starting off white, the gills deliquesce, meaning, they slowly decompose and liquidify into black ink, creating a beautiful gradient and slowly turning black, which also happens to be the colour of its spores.

It may be quite sudden to appear and it’s not the rarest mushroom out there but it’s certainly an incredibly interesting sight to see! 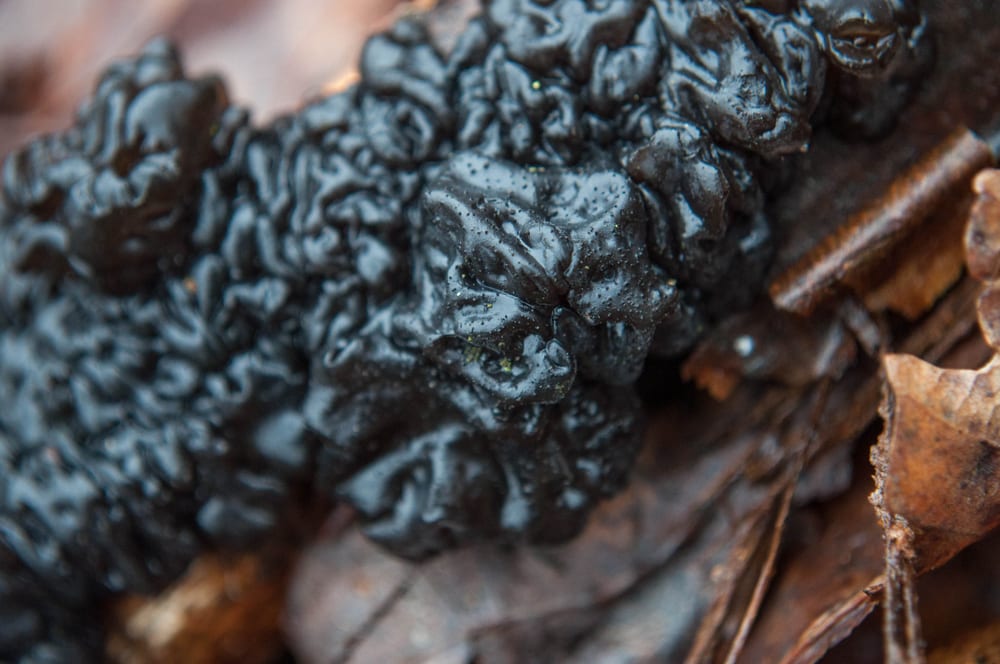 Exidia glandulosa comes in with perhaps the best common name on our list yet, the black brain fungus (also known as black witches’ butter fungus) certainly matches that description with an amazing black colouration in wet weather and greasy, butter-like looks, almost a tar-like appearance.

This fungus appears throughout Europe and North America throughout the winter and autumn and it’s often received divisively, having looks some may describe as beautiful and intriguing or others as downright gross, but in either case, it’s hard to deny how unique it truly is!

It’s frequently found on dead wood and fallen branches and it’s described as, expectedly, squishy or gelatinous in texture. Its edibility is sadly classified as dubious at best and even if it was safe to eat, it likely has no substantial nutritional value to speak of, so, as incredible as it looks, it’s probably best to just opt to go for real butter if you’re hungry. 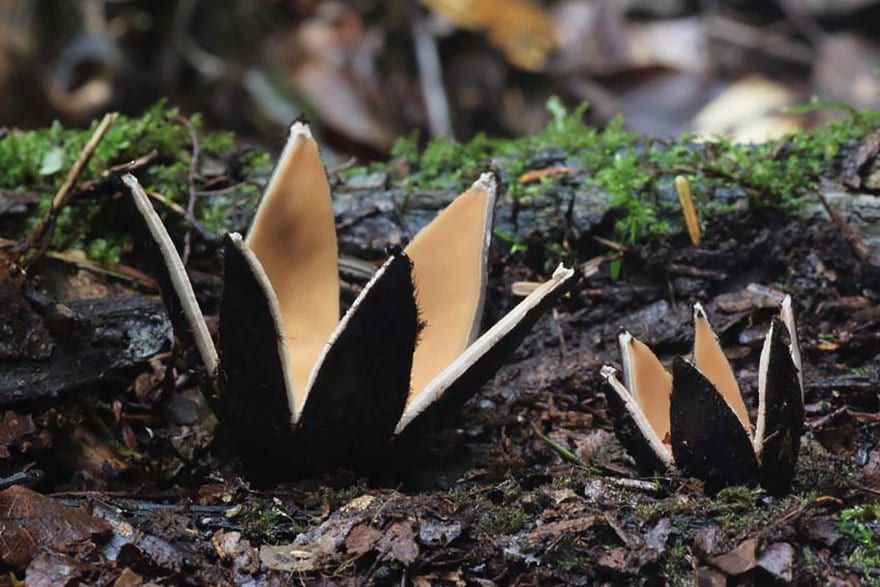 Chorioactis, known as the devil’s cigar or Texas star in the United States or kirinomitake in Japan, is a pretty and extremely rare genus of fungi which only contains one species; Chorioactis geaster, the literal, nearly aptly-shaped star of this part of the list!

This pretty and almost star- or flower-shaped mushroom is known for its looks and extremely strange distribution, sometimes cited as one of the rarest mushrooms in the world, it’s actually only found in a few Texas counties and a small number of locations in Japan, its placement almost seeming near random!

Rarity and appearances aren’t the only reason it’s on this list however, this mushroom, interestingly, looks like an American football or a cigar in the early stages of its life before it splits apart, releasing its uniquely massive, also cigar-shaped spores with an audible hiss and sprouting into an enticing flower-like fungus with three to six rays or ‘petals’.

2 Chicken of the Woods 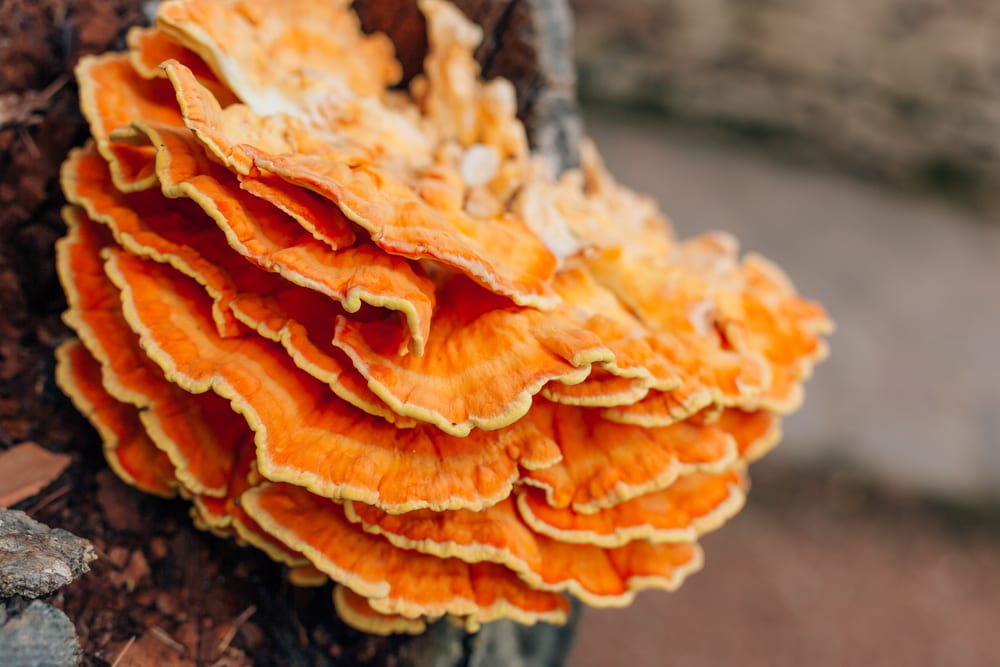 Laetiporus sulphureus, the chicken of the woods, is a large, yellow- or orange-coloured edible polypore mushroom which grows on trees, and, just like the other things on this list, comes with some certainly interesting quirks aside from its unique appearance.

Most notably, the chicken of the woods.. tastes like chicken! Yes, really!

It’s quite common to proclaim that something tastes like chicken, often as a subject of a joke, however, in this case it’s really true! This mushroom is fairly high in protein and, as such, it’s a fairly popular vegetarian alternative to chicken!

Frequently consumed fried in breadcrumbs, it’s said to be best when it’s picked young and moist and keeps well frozen too.

A notable downside to this meat-free chicken, though, is that a small percentage of people experience nausea or side effects after eating it and it’s important to make sure that it hasn’t been imbued with potentially toxic substances from the tree it was growing on.

As long as those factors are considered though, this may just be an incredibly interesting and potentially incredibly tasty mushroom to look for! 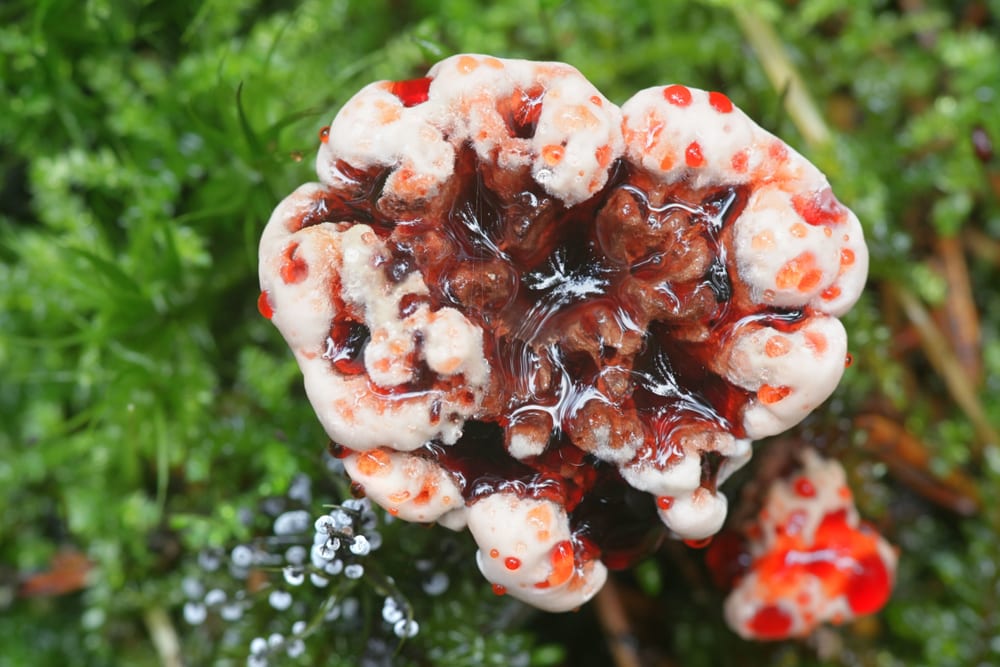 We’ve arrived at the final fungus on our list and, fittingly so, it has the most unbelievable and incredible looks of any on this list, Hydnellum peckii or the bleeding tooth fungus, devil’s tooth, or even ‘strawberries and cream’, is another aptly described one.

The adult form is, admittedly, not that special, however, when the fungus is young it’s an entirely different story!

The off-white, almost beige or pink colouration is dotted with many, many ‘pores’ which oozes a striking, vivid, red or dark red liquid which is extremely reminiscent of blood.

This liquid, actually a type of sap, makes it look like the fungus is bleeding from multiple holes thanks to a red pigment found within the organism.

This fungus isn’t all scary though, a chemical found in it, thelephoric acid, is seeing experimentation as a potential treatment for Alzheimer’s disease!

And, finally, if you were hoping to get a taste of this incredible species, while it’s not toxic, it is, however, said to be extremely bitter and thus sadly classified as inedible.

At the end of the day, it may not be tasty, but it would surely make an eye-catching cover for a fantasy novel!

10 Sea Creatures That Belong On Another Planet

About The Author: Just a British person with an extreme interest for all things weird and intriguing!