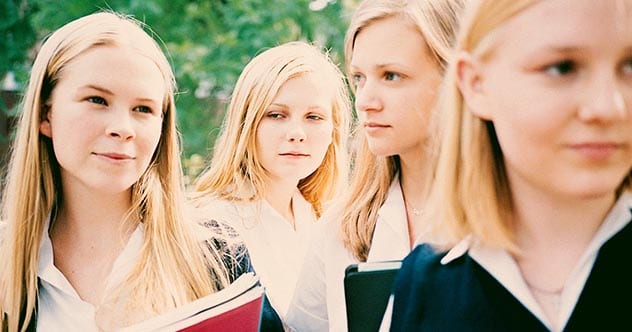 What comes to mind when you think of suburbia? Most of us envision average people going about their quiet, mundane lives without much interference or excitement. But what if there was more to that than meets the eye? Filmmakers like David Lynch are known for peeling back the curtain of small-town America to reveal the dark underbelly hiding just beneath the surface. You can count on the movies on this list to take that concept to the extreme.

Top 20 Gangster Movies Of All Time

2018’s dark comedy/crime thriller was directed by Paul Feig and centers around a single mom, Stephanie (Anna Kendrick), living in Connecticut. Stephanie meets and befriends Emily (Blake Lively), a successful PR director for a fashion company, a carefree yet mysterious woman whose life couldn’t be more different. Emily lives in an ultra-modern home in an upper-class neighborhood with her husband, an acclaimed writer now working as a college professor, and their son.

Out of the blue, Emily goes missing, and Stephanie is left to put together the pieces. What begins as a mystery turns into a twisted tale of murder, betrayal, and revenge as secrets are revealed that lead to a neverending spiral of lies and deceit.

Highlight: Emily’s impeccable style, as modeled by the stunning Blake Lively, is to die for.[1]

Cory Finley’s 2018 directorial debut begins with childhood friends Lily (Anya Taylor-Joy) and Amanda (Olivia Cooke) as they reconnect in suburban Connecticut after years apart. Lily is now a polished, upper-class teenager, while Amanda is an outcast on the opposite end of the social spectrum.

Lily is hired by Amanda’s mother to tutor her. Amanda is quick to recognize this arrangement is little more than Mom paying for her daughter to have a friend. Lily denies being paid, but the interactions between the two girls are awkward, as they no longer have anything in common. Before long, however, the pair bond over Lily’s hatred for her stepfather. Amanda, an emotionless sociopath, hatches a plan to murder him.

This 2018 horror film was written and directed by Jordan Peele. It follows Chris (Daniel Kaluuya) and his girlfriend, Rose (Allison Williams), who go on a weekend getaway to Upstate New York to meet her family. What seems, at first, to be an average meet-the-parents scenario soon becomes disturbing when a series of events begin to unfold that leave Chris wondering whether or not he will make it out of there alive.

Interesting Insight: Kaluuya went toe-to-toe with Samuel L. Jackson about whether or not he was “black enough” to play this role.[3]

David Lynch’s 1986 dissection of middle-class America set the tone for deeper exploration of day-to-day suburban life for years to come. After his father has a stroke, college student Jeffrey Beaumont (Kyle MacLachlan) returns home to North Carolina. On the way back from a hospital visit, Jeffrey discovers a severed human ear in a field.

Jeffrey brings the ear to a police station where he meets the detective’s daughter, Sandy (Laura Dern), a girl he once knew who tells him that she thinks the ear might have something to do with a lounge singer named Dorothy Vallens (Isabella Rossellini).

Jeffrey and Sandy team up to solve the mystery behind the ear. However, the clues lead them into the dark, twisted world of a sexually deprived psychopath named Frank Booth (Dennis Hopper), and they quickly realize that they are in over their heads.

Ironic Fact: Hopper was stone-cold sober and fresh off a stint in rehab when he played this unhinged, drug-crazed character.[4]

This gothic fantasy romance from 1990 is, perhaps, one of Tim Burton’s most notable films. A scientist suddenly drops dead before he is able to complete his latest creation, an artificial man, who is unfinished and left with scissor blades for hands.

The man, Edward (Johnny Depp), now resides alone in a mansion belonging to the late scientist until one day when he is visited by Peg (Diane West), a friendly, local Avon lady. Peg brings Edward down from the mansion and home to her suburban town.

Edward is seen as both a novelty and an outcast by those around town. His new life becomes even more complicated when he falls in love with Peg’s daughter, Kim (Winona Ryder), and an accident with his hands leads him to be perceived as a threat.

Movie Fact: Edward Scissorhands was the first of many collaborations between Burton and Depp.[5]

Top 20 Geek Movies Of All Time

Michael Lehmann’s 1988 teen flick revolves around a high school’s most popular clique: Veronica (Winona Ryder) and three other girls—each named Heather. Veronica is so over the Heathers’ neverending antics and desperately wants out of the group when she meets J.D. (Christian Slater), a rebellious new student who thrives on violence and wreaking havoc on popular kids.

The two soon become an item, but something Veronica perceives to be a joke is taken to the next level when J.D. poisons and kills one of the Heathers. Chaos ensues. Heathers bombed at the box office but has gone on to become a cult favorite and (sadly) a musical.

How Many Heathers?: The name is uttered exactly 90 times throughout the movie.[6]

Written and directed by Richard Kelly, this 2001 psychological thriller stars Jake Gyllenhaal as Donnie, a teenager who leaves his house one night while sleepwalking and sees a human-size, demonic-looking Rabbit named Frank. Frank tells Donnie that the world is going to end in 28 days. Donnie returns home to find that a jet engine has crashed into his bedroom, right where he should have been sleeping.

Time travel and wormholes come into play and lead Donnie’s family to send him to a therapist who believes that the teen’s visions are daylight hallucinations and symptoms of paranoid schizophrenia. Events brought on by Frank manipulating Donnie into committing various crimes turn the small town of Middlesex, Virginia upside down.

James Mangold’s 1999 psychological drama is based on the true story of Susanna Kayson, played by Winona Ryder (her third mention on this list!), an aimless 18-year-old in the 1960s who is sent to a mental institution for young woman in New England after attempting to commit suicide. There, she meets other patients, like the beautiful and alluring Lisa (Angelina Jolie). She must ultimately choose between the people on the inside that she comes to know and love or the outside world which can be intimidating and difficult to navigate.

Based on the best-selling book of the same name, Sofia Coppola made her directorial debut in 1999 with a story told from the perspective of a group of teenage boys who grew up together in the suburbs of Grosse Pointe, Michigan in the 1970s.

The boys reflect on their experience with their neighbors, the five Lisbon girls, whose strict parents forced them to live sheltered lives. When the girls did experience otherwise normal human interaction, the outcomes were not good.

Sibling Facts: Seventeen-year-old Therese was the eldest sister, followed by Mary, Bonnie, Lux, and Cecilia, who was 13.[9]

Considered one of the best films of our time and one of the greatest screenplays ever written, this 1999 film directed by Sam Mendes gifted audiences with some of the most memorable pieces of dialogue, visuals, and performances ever seen on screen.

Kevin Spacey stars as Lester Burnham, a middle-aged man living in suburbia, working at a job that he hates, and married to a wife (Annette Benning) he can’t stand. He finds new meaning in life when he becomes infatuated with his daughter’s best friend.

Top 20 Greatest Movies Of All Time