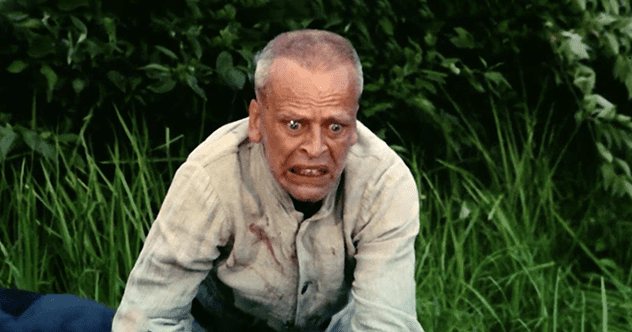 Watching a scary movie on Halloween has become as much of a tradition as anything else associated with the day, so let’s all stay in this Halloween, shall we? Not that there is much of a choice, given that a rampant plague will prevent us from going to a costume party or knock on stranger’s door and threaten them for a Mars bar or two… I mean, who’s even scared of masks anymore? Seems more like social responsibility nowadays.

Some of us enjoy subverting traditions, even newer ones like the watching of horror movies—so this is a list for you! Here are 10 non-horror movies (with as few spoilers as possible—you MUST watch these films) that are guaranteed to scare you at least 35% more than 2005’s ‘House of Wax’ starring Paris Hilton. It’s science.

WARNING: Some footage on this list is disturbing. Proceed with caution.

War is hell. This film is hell. This may well be the most uncompromising, visually terrifying, best acted and pants-shittingly tense war films ever made.

Based on the 1975 book “I Am From A Fiery Village”, the film shows the horrors of Nazi-occupied Belarus through the eyes of a teenage boy named Flyora. He joins the Belorussian resistance and bears witness to some of the most brutal atrocities mankind has ever inflicted on itself—piles of executed bodies, horrible maimings, random deaths from buried landmines, burnings and rape. But it is the reactions of Flyora, played by the incredible Aleksei Kravchenko, that’ll stick with you. It grounds the horrors in reality—you’ll imagine yourself seeing what he sees, you’ll feel his pain and terror. Or you could stick to Scary Movie 5…[1]

Almost any film from maverick German genius Werner Herzog could have made this list. From the depictions of individuals on society’s periphery in ‘Stroszek’, the uncaring cruelty of the natural world coupled with a protagonist’s slow slip into madness in ‘Fitzcaraldo’ and ‘Aguirre, Wrath of God’ to the strange, cruel world in ‘Even Dwarfs Started Small’, Werner Herzog is the king of the avant-garde weirdos. His attempt to finish Georg Büchner 1836(ish) unfinished play ‘Woyzeck’ is perhaps the most creepy and affecting film (Grizzly Man is pretty rough, but Woyzeck includes a wild-eyed Klaus Kinski at his best).

The film is a character study of an extremely downtrodden man. Franz Woyzeck tries to support his mistress and their illegitimate child by taking on menial, degrading jobs to supplement his wage as a common soldier in 19th century Germany. He undergoes various humiliating tasks and medical experiments, growing increasingly unhinged. His partner, played by the criminally little-known German actress Eva Mattes, gets bored of the hapless Woyzeck and sleeps with a handsome Drum Major. Woyzeck confronts the other soldier, only to get beaten up , emasculating him further. The depiction of madness in the film’s final scenes are deeply unsettling, giving the viewer a real window into what can happen when you push an unhinged man too far.[2]

Fun Fact: Woyzeck was put to music in the opera entitled Wozzeck by Austrian composer Alban Berg who also wrote the opera Lulu, about prostitutes, lesbians, and Jack the Ripper—as featured on our Top 10 Truly Disturbing Classical Pieces.

Whether you watch one of this man’s feature length films or a selection of his short films, a bit of Czech animator Jan Švankmajer’s works are a perfect addition to your Halloween evening. You’ll certainly have the weirdest nightmares.

Watching his 1982 ‘Dimensions of Dialogue’ is meant to feel like cutting edge, conceptual art, a comment on late-stage communism, consumerism and ideological confusion. It’s more likely to make you feel uneasy and more than a little queasy. The sight of the stop-motion clay figures tearing into one another, ripping gobs of greyish ‘flesh’ and heavily pounding their heads to blown-out, roiling mush feels like you’re watching an Eastern European snuff film, albeit an artsy one.

1988’s ‘Alice’ a dark re-imagining of Lewis Carroll’s classic ‘Alice in Wonderland’ would be perfect for Halloween. Imagine the Disney version, but part live and part stop-motion, without the whimsy and wonder. If you have any qualms as to how horrific this silly little fantasy story could be, here’s Alice’s last line in the film (referring to everyone’s favourite dope from the Disney film—the White Rabbit) “He’s late as usual. I think I’ll cut his head off.”[3]

Like most of David Lynch’s output, ‘Mulholland Drive’ has plenty of strange, surreal and disconcerting sequences. But jump scares? In a non-horror flick? You better believe it, and it’s a whopper—perhaps the best shot, most tense, nerve-shattering jumps ever committed to celluloid. Or an SD card.

The film itself is a head-scratcher—Lynch’s penchant for blurring the lines between dreams/nightmares and reality causes any attempt at definitive explanations of his films quite futile. All we can say for sure is the diner scene is one of the best made, artfully set-up scares in cinematic history. Dreams and flights of fancy are hard to show on the big screen, but Lynch gets as close as anyone to capturing the essence of a nightmare in this scene, and more broadly, in his cinematic oeuvre.[4]

For a good, long period during the 20th century, people across the planet feared potential nuclear annihilation above all else. Films like ‘Threads’ didn’t help that fear for the public (even if such works helped politicians visualise a nuclear catastrophe and realise the follies of their sabre rattling). No blurry symbolism here—just sledgehammer-to-the-gut realism depicting one of the worst possible outcomes mankind nearly faced.

The film is set in the northern English city of Sheffield. As the common English saying goes, “It’s grim up north”. A young couple, still living with their respective parents, prepare to get married due to an unplanned pregnancy. You get lulled into thinking this will be a Ken Loach-esque, gritty working class drama about some struggling twenty-somethings starting their lives together in a post-industrial England. Is that grim enough for you? It gets so much worse…

The Soviet Union and the USA exchange nuclear fire and the world burns, including Sheffield (a centre for UK industry that was indeed a Soviet target in the event of an all-out nuclear war). The film then charts the life of Ruth Beckett, the young expectant mother, as she traverses a post-nuclear attack England, showing us just how terrible it would have been. If you’re a fan of dystopian artworks, this may even be too rough for you. Orwell’s 1984 was scary, ‘Threads’ was scarily plausible.[5]

Surrealist director Luis Buñuel, the man behind this strangest of films (collaborating with Salvador Dali), described it as “nothing other than an desperate, impassioned call for murder”. Horrified yet?

Much like David Lynch’s later efforts, Buñuel’s film is a musing on dreams, employing a Freudian free-associative lack of regular logic or chronology. Salvador Dali was employed to bring his strange styling to the creative process. The film has no discernible plot, but the imagery ranges from unnerving to haunting and even quite visceral—a death’s head moth, a gripping hand reaching through a door whilst covered in ants and, most memorable of all, a man slicing a young woman’s eyeball with a razor. Can we get back to melting clocks now, please?[6]

You’d be right to raise a eyebrow quizzically if somebody suggested a Clint Eastwood western movie for Halloween. Most of his cowboy films are about as scary as a tall glass of sarsaparilla (unless you are allergic to sarsaparilla, of course). ‘High Plains Drifter’ is different.

Eastwood stars as a nameless drifter (similar to his famous ‘man with no name’ character from Sergio Leone’s classic ‘Dollars’ trilogy of Spaghetti Westerns) who comes across an isolated mining town in California. The frontier feeling you get from this vision of the Old West is gritty and dangerous, stark and creepy—that’s before the action begins. After he kills the town’s sheriff and his deputies and rapes a local prostitute, the weak-willed and terrified townsfolk beg the stranger to be their new sheriff. Why would they do this? Because an evil band of grudge-baring criminals are about to be released from prison. What happens next is a master class in gothic mood-making, with enough misery and creepiness to make this one rootin’-tootin’ Halloween, y’all… sorry.[7]

This is perhaps the most beautiful film on the list. Hayao Miyazaki’s seminal work of cinematic magic is often held up as one of the greatest animated films ever made. It can also be pretty damned scary.

As cute as the little soot creatures are, the ‘No-Face’ monster is as scary. As wonderfully elegant Haku is as a dragon, giant-headed witch Humbaba is as tough to look at. Then there’s the scene where Chihiro (the film’s little girl protagonist) sees that her parents have turned into grotesque hog-monsters, gluttonously gorging on some magically prepared street food.

‘Kawaii’, romantic fluff? Hardly. As with most works from Studio Ghibli, there is a rough, gruesome and quite frightening undercurrent to even this most beautiful of movies.[8]

To many, a trip to the dentist is as fear-inducing as any scary film. What about a Nazi dentist? One that will use his tools to torture you for info? Sweaty palms yet?

This taught thriller isn’t the scariest film you’ll ever see. It does use Dustin Hoffman’s character’s love of running to great use, a device that adds to the tension, making us feel as though we’re as much on the run as he is. Is that enough to keep you under a blanket though? Not really.

Then there’s the torture scene. Much as ‘Jaws’ kept a generation of kids out of the water (even swimming pools), the pained screams of Dustin Hoffman’s character and the high-pitched whine of a drill wielded by Lawrence Olivier’s on-the-run Nazi dentist kept cinema-goers from their yearly check-up with the dentist.[9]

This cult classic from director Shane Meadows really gets under your skin, then lays some eggs which hatch into tiny fear spiders that will eat you from the inside out long after you’ve finished watching. With a gritty realism reminiscent of many great English working class classics like ‘This Sporting Life’, ‘Kes’ and ‘Secrets & Lies’ crossed with outsider/revenge films like ‘Taxi Driver’, ‘Death Wish’ and ‘Se7en’. That’s as close as we can get using existing films as references- it’s not even close, though. ‘Dead Man’s Shoes’ is very much its own thing.

The film employs many classic horror/slasher film tropes—a scary mask (a particularly grim looking gas mask), gruesome killings, a general sense of foreboding and choppy editing. But a horror film this is certainly not. It’s a psychological thriller and, more poignantly, a study of brotherly love and loss as well as a look into the harsh treatment many disabled people receive without a support network. If that sounds too much like a charity PSA, fear not—for fear you will. I haven’t looked inside any suitcases for years since watching this movie…[10]

About The Author: C.J. Phillips is a storyteller, actor and writer living in rural West Wales. He is a little obsessed with lists.