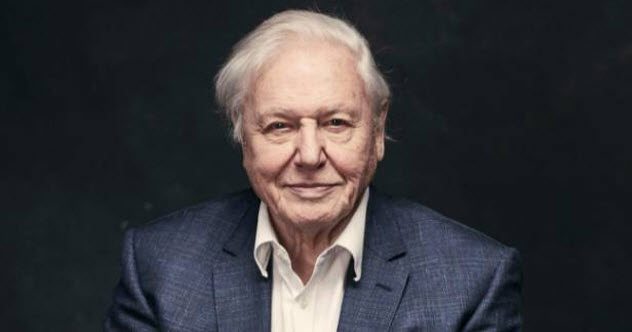 Netflix recently released David Attenborough: A Life on Our Planet, an autobiographical feature recounting the life and times of the environmental broadcaster we all know and love. In this feature film, the 94-year-old Sir David Attenborough looks back at the evolutionary history of life on earth, mourns the loss of wild places he has visited and offers a vision for the future.

Attenborough’s contribution to broadcasting and wildlife film-making over the last 5 decades has brought him international recognition and earned him countless awards. He has been called the great communicator, the peerless educator, a national treasure and the greatest broadcaster of our time. His programmes are often cited as an example of what public service broadcasting should be and have influenced generations of wildlife film-makers.

The legendary Attenborough’s distinctive voice lends a special something to all his films and on this list are 10 of the sonorous naturalist’s most memorable video moments. From somber to light-hearted, they all show his care, dedication and passion for life on earth. Be warned, though, humans don’t always come off well.

10 Attenborough: The Amazing Lyre Bird Sings Like a Chainsaw

“Ever since we arrived on this planet as a species, we’ve cut them down, dug them up, burnt them and poisoned them. Today we’re doing so on a greater scale than ever.”

Known for its perfect impersonations, the Lyre Bird mimics the calls of at least 20 different bird species, such as the Kookaburra. And while the clip above beautifully illustrates not only the songbird’s magnificent voice but also his spectacular plumage, there is something disturbing about its ability to mimic ‘man-made’ noises. Whether it’s the noise made by a camera shutter or car alarm, it’s unsettling to know that this magnificent bird has come into such close contact with humanity. Most disturbing of all: it perfectly imitates the noises of a lumber crew with their chainsaws cutting down its very habitat.

“In moments of great grief, that’s where you look and immerse yourself. You realise you are not immortal, you are not a god, you are part of the natural world and you come to accept that.”

(Not suitable for sensitive viewers.) The clip above tracks the movements of a lone Antarctic Minke whale as it crosses paths with a pod of Orcas, also known as killer whales. These majestic creatures are surprisingly nimble as they battle it out in a sprint for survival. For two long hours the Orcas flank the Minke whale and it’s impossible to tell who will go down first. But as there is only one Minke and a pod of, the lone Minke is soon battered and bitten by the killer whales. Sea gulls are attracted by the scent of the fresh blood in the water and lend a Hitchcock-like soundtrack to the battle of the giants. Before long, the Orcas try to flip the Minke on its back and keep it there – with the blowhole submerged it will soon die. With a final strike, the hunters drag the Minke under and start to feed.

“Real success can only come if there is a change in our societies and in our economics and in our politics.”

The rarest living animal in all the world, George the Galapagos Tortoise, was 100 years old when he died (only a fortnight after the clip above was filmed). Much of the video focuses on the unique evolutionary attributes of these gentle Galapagos giants such as the shape of their shells and their long slender necks – all in aid of better feeding. The sad truth is that when ships first arrived on the islands, sailors started slaughtering the tortoises for meat. They soon discovered that these creatures could live for about a year without food or water and started keeping them on board their vessels to slaughter for fresh meat after months of being kept in captivity. In 1971 it was discovered that there was only one single tortoise left on Pinta Island – lonesome George, the last of his kind. He was captured and lived out his last days in a safe enclosure.

7 Attenborough Makes Friend with an Orangutan

“An understanding of the natural world is a source of not only great curiosity, but great fulfilment.”

Once you get past the idea of “collecting specimens”, i.e. capturing wild animals and locking them up in cages, this video from 1956 is rather heartwarming. A very young Attenborough has gone to Indonesia as a joint venture with the London Zoo in search of the fearsome Komodo Dragon. Having collected their specimens (as was the practice at the time), Attenborough and the rest of the crew return by boat. He slowly wins the trust of a young orangutan named Charlie and entices him to leave his cage in order to feed him a tasty treat. Fortunately, practices have changed and the next item on this list somewhat restores Attenborough’s rapport with the great apes.

6 Attenborough and the Amazing DIY Orangutans

“It’s extraordinary how self-obsessed human beings are. There is so much more out there than what connects to us.”

The video opens with the sight of an orangutan washing herself with soap and then doing the laundry. As Attenborough is quick to point out, she has not been trained to do this as some kind of party trick. She has simply observed others doing it and is now copying them. And it doesn’t stop there. From rowing a boat with a massive paw to using a handsaw, hammer and nails to do some work around the house, orangutans are able to imitate humans entirely of their own volition. The similarity to human beings is just uncanny. Their very human-like hands, big brains and the ability to learn and copy what they see happening around them, just goes to show how closely we are related to these great apes.

“If we see a little thing like that, big eyes, tiny nose, we go ‘aaaah’. We are programmed to.”

Arguably one of Attenborough’s most famous animal interactions, this gorilla encounter has been voted one of the top TV moments of all time. The smiles and grimaces on his face are not only about the beautiful moment, though. Off camera, two playful baby gorillas are carefully removing his shoes! Together with the BBC ‘Gorillas’ camera crew, the clip above sees the living legend recalling one of the most unforgettable moments of his life. When asked what he remembers most about being surrounded by gorillas, he responds with a single word: “bliss”.

4 Saying Boo to a Sloth!

“I am intoxicated by animals.”

In this amusing clip, Attenborough ditches his usual trademark soft whisper and climbs a tree in pursuit of what he refers to as an extraordinary plant predator and mobile compost heap. No need to sneak up on this fella as sloths are notoriously slow to move and react. Like many of us, the sloth has adapted to the lack of nutrition in its diet by hanging around and not doing very much at all. It spends most of its time hanging from tree branches in a way that uses very little muscle. Funnily enough, only the need to defecate will encourage the sloth to make its way down to the forest floor. Why? Nobody knows.

“I wish the world was twice as big and that half of it was still unexplored.”

In the clip above, the beautiful bird of paradise does what no man has dared before – interrupting Sir David Attenborough. Ever the professional, Attenborough attempts, several times, to complete his monologue by starting over, eventually settling for incorporating the bird’s beautiful song. It had been a childhood dream of the naturalist narrator to visit Papua New Guinea, so when it finally happened in 1996, he was not going to be upstaged!

2 The Capercaillie Bird Defends its Territory

In this clip, Attenborough studies the battle tactics of the largest of the grouse species: the capercaillie. Roughly the size of a turkey, this particular bird is more than a match for our beloved presenter. As Attenborough enters its territory in the Caledonian pine forest in the Scottish Highlands, the normally shy bird goes straight for his knees, knocking him right over. Perhaps not the best idea to visit during mating season …

“To say I was concerned is putting it mildly.”

In a 1975 episode of Michael Parkinson’s chat show, Attenborough recounts his travels through the Amazon. When his entourage of chaperones one day comes to a halt, he wonders about their reluctance to go any further. Upon questioning, it turns out that the men were afraid as they knew that further down the mountain lived a colony of cannibals. Or, as they put it, “bad fellas”. Being British to his core, Attenborough at first ignores their protestations. Soon, however, a bunch of men came charging up the mountainside brandishing spears and knives. Ever the pragmatist, the cameraman turned the camera towards the men and captured the moment Attenborough walked up to them, sticking out his hand and greeting them with a “good afternoon”.

Watch and enjoy. You’ve got to see (and hear) it to believe it!