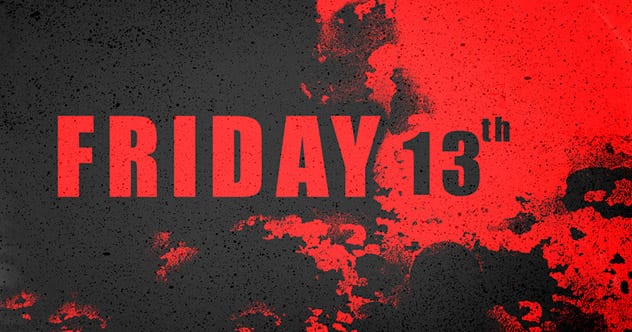 3, 7 and 13 are arguably the most recognizable numbers when it comes to superstition. Bad luck, for instance, is said to come in threes, as is death. Some who believe in superstitions, held their breath after the news broke in 2016 that actor and talk show host Alan Thicke had passed away on 13 December.

They knew that the bad news wouldn’t be over until two more celebrities had died. Their fears were confirmed when singer George Michael passed away on 25 December and Star Wars fans around the world were devastated when Carrie Fisher died in hospital on 27 December after suffering a medical emergency during a flight to Los Angeles a few days earlier.

The number 7 on the other hand is believed to bring good luck as it is a prime number and cannot be obtained by multiplying two smaller numbers. 7 can be found throughout mythology and ancient legends, bringing good fortune, healing, and even seven paths to heaven.

The number 13 usually spells horror. Whenever a Friday the 13th swings around during any given calendar year, many who are superstitious do their best to avoid crossing paths with a black cat, walking under ladders and spilling salt. Why is the number 13 unlucky though? Well, it depends on where in the world you find yourself.

On this list are more numbers either feared or revered around the world.

10 Knock on wood with a twist 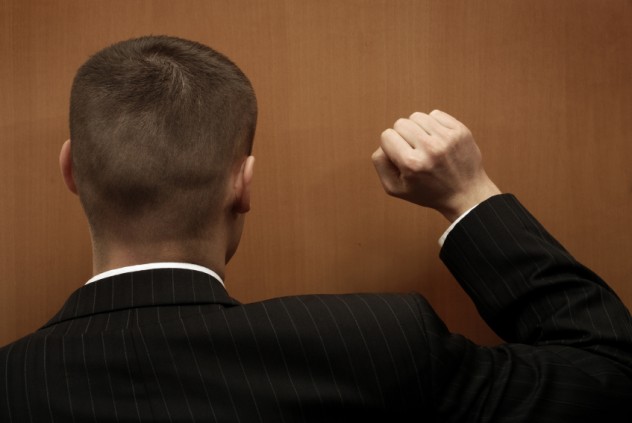 The ‘knock on wood’ or ‘touch wood’ superstition is well known in many countries. The action of knocking on a piece of wood is meant to ward off bad luck and draw good fortune towards the knocker.

In Iceland, the superstition is so common that no one even bats an eyelid when knuckles around them knock wood all over the place. Icelanders also say “sjö níu þrettán” when they do this, which translates to ‘seven nine thirteen.’

Seven is considered to be a magic number in Iceland, because it can be obtained by adding three and four. Three and Four are said to represent the spirit and material worlds. Nine is obtained by multiplying three times three, which is the number of the Holy Trinity. The number thirteen, as per the Icelandic superstition, is said to have been taken from the days of the old Roman calendar which included an extra (thirteenth) month every six years. The so-called ‘Leap Month’ was not well-received and eventually became associated with bad luck.

The phrase ‘seven nine thirteen’ is thought to ward off bad luck and bring good fortune, by ‘paying homage’ to both good and bad numbers.[1] 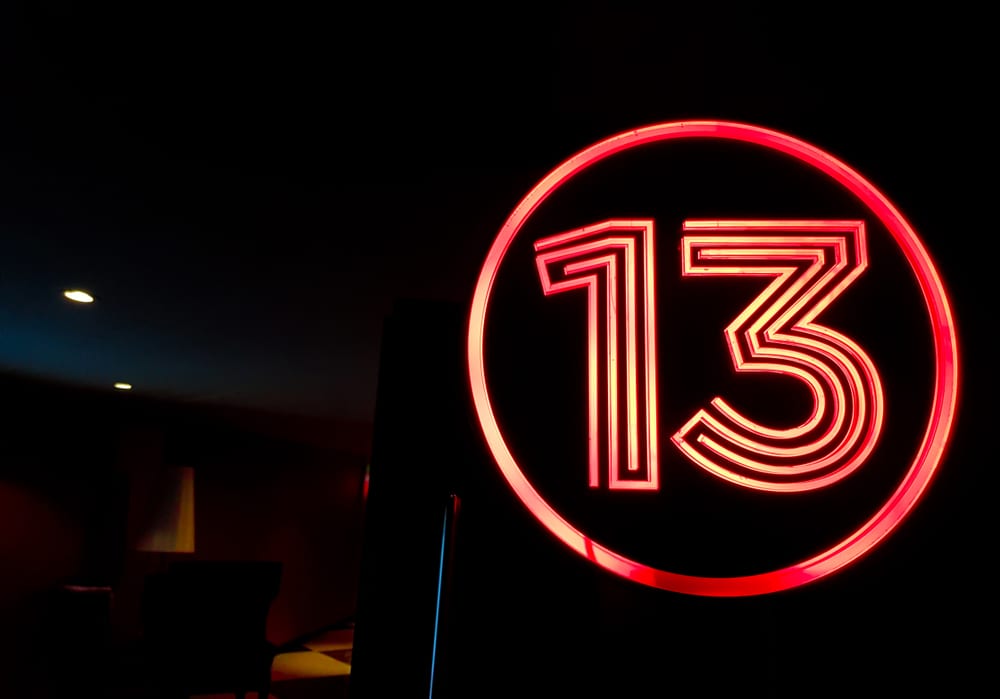 Move over, Friday the 13th. In Spain, people couldn’t be bothered with you. Instead, when the 13th falls on a Tuesday, the superstitious tend to be wary of leaving the house in case bad luck befalls them.

The god of war, Mars, is said to have dominated Tuesdays and since Martes (Tuesday in Spanish) is derived from his name, the day has been connected to violence and death. What’s more, it’s believed that Constantinople fell on Tuesday April 13, 1204.

According to legend, ‘The Confusion of Tongues’ which took place after the construction of the Tower of Babel, also took place on Tuesday the 13th. And don’t forget that the 13th chapter of Revelation speaks of the coming of the Antichrist, which just makes the number even more ominous.

Tuesday has become so unpopular that a saying was born: ‘don’t marry, go on a boat, or leave your house on a Tuesday.’[2]

8 The number of good fortune and wealth 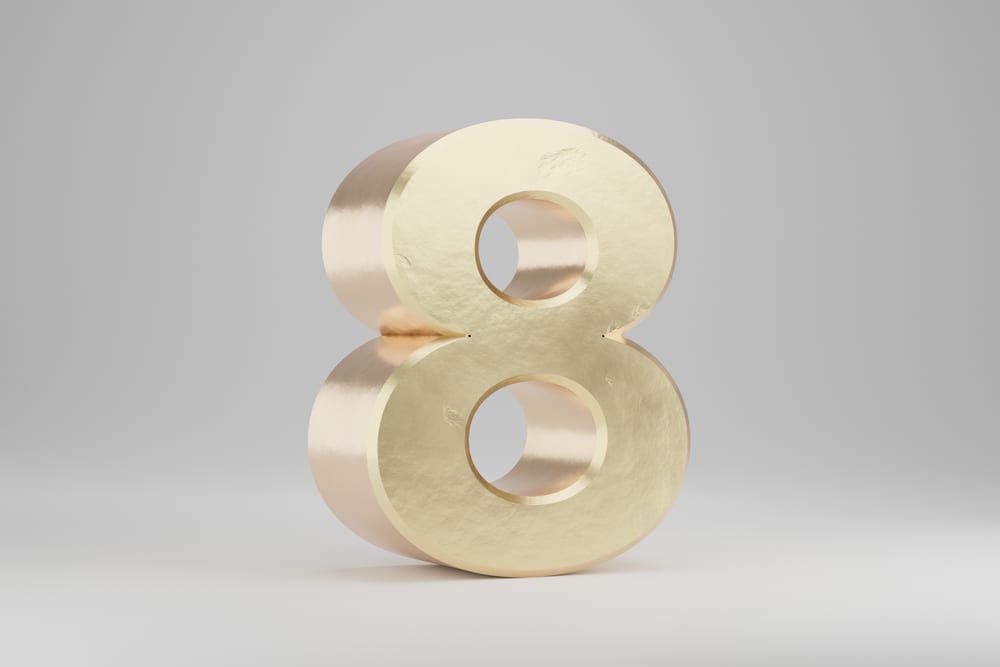 While that might seem like a strange number, it helped to sell the place fast. This is because the number 8 is considered to be extremely lucky in Chinese culture and features prominently in real estate, both in pricing and in the numbering of streets, buildings, and floors. This was further proven by the fact that a building at 88 Alfred St. in Sydney was sold within a few hours after being put up for sale. There are also often requests made by buyers to include an 8 in the selling price, to ensure good fortune.

Some who buy apartments and units within high-rise buildings insist on staying on the 8th floor or in an apartment with 8 in its number, wherever possible.

7 On the flip side 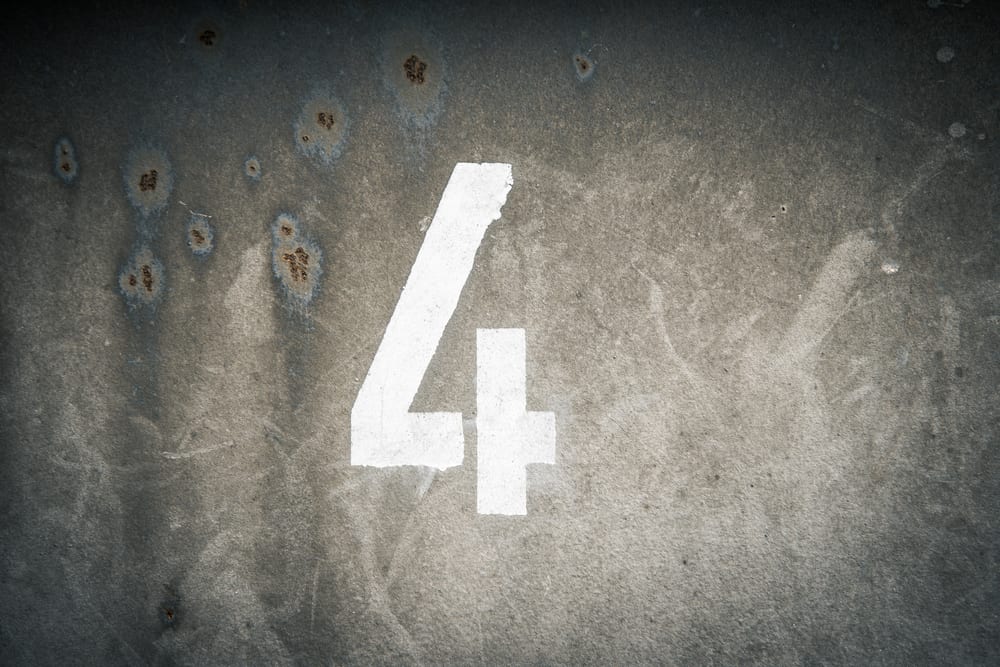 As much as the number 8 is said to bring good luck, the number 4 is frequently omitted from buildings and planes and supermarket aisles in some Asian countries. The reason being that 4 sounds similar to the word ‘death’ in many Chinese and Japanese languages, which had led to a large number of Asian companies avoiding using the number wherever possible.

The fear of the number 4 is so common that it has been given an official name: tetraphobia. In the early years of the new millennium, Alfa Romeo changed the name of their 144 model car which they were trying to sell in Singapore because of people’s fear of buying it. Nokia has long since stopped releasing phone models that start with 4, for the same reason. In Beijing, the manufacturing of license plates that include 4 has been halted. Many apartment buildings and hospitals don’t have a fourth floor either. In Japan, combining the number 4 with 9 to get 49 is considered especially bad luck because the words sound the same as the phrase “pain until death.”

Giving gifts in sets of four or multiples of four is also a big no-no and considered to spell doom for the receiver.[4]

6 The number of the beast 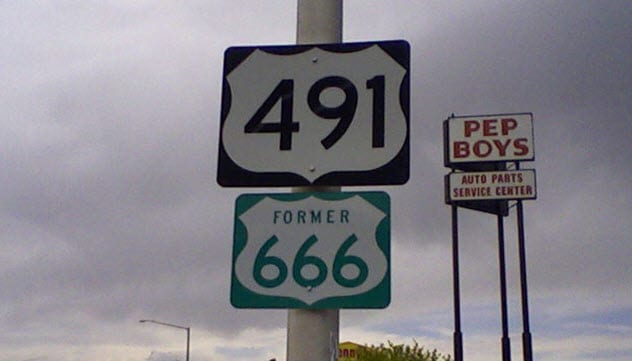 666 has long since been associated with the seven-headed, ten-horned beast of the Book of Revelation, since it is called the ‘number of the beast’ in chapter 13. The numbers have become the most recognized symbols for the Antichrist/devil and has led to hexakosioihexekontahexaphobia, which is the fear of the number 666.

Because of its devilish connotations, many superstitious Americans have concluded that 666 has been encoded in banking systems, social security systems, medical and personnel records as well as UPC bar codes for sinister reasons. Some refuse to live in houses that bear this number and many even drive around until their odometer turns from 666 to 667.

In America, Highway 666 has become known as the Devil’s Highway after several accidents rumored to have been caused by the highway itself. Late former US president, Ronald Reagan and his wife, Nancy, had the number of their Bel-Air home changed from 666 to 668 after moving in.

666 is not unlucky for everyone, however. On 13 Oct 2017, which happened to fall on a Friday, Flight 666 departed on the 13th hour from Copenhagen, Denmark and landed safely in HEL. Helsinki, that is.[5]

5 It’s all in the numbers

In Russia, many superstitions revolve around numbers. As is the case with other countries around the world, many Russians refuse to shake hands over a threshold on a Friday that bears the 13th as a date. Doing so on any day of the year offends the local unhappy house spirit, Domovoi, but even more so on Friday the 13th.

Spitting three times over the left shoulder is not uncommon after complimenting a fellow Russian’s good looks or a baby’s good health. Some even eat their bus tickets when the sum of the left three numbers equal the sum of the numbers of the right, as this is believed to bring good luck.

Also, a newborn baby shouldn’t be paraded around strangers until the infant is at least 40 days old. And don’t give the gift of even-numbered bouquets of flowers. Even numbered flower arrangements are reserved for funerals and even numbers are considered back luck in Russian folklore.
[6]

4 Superstition in the land of magic 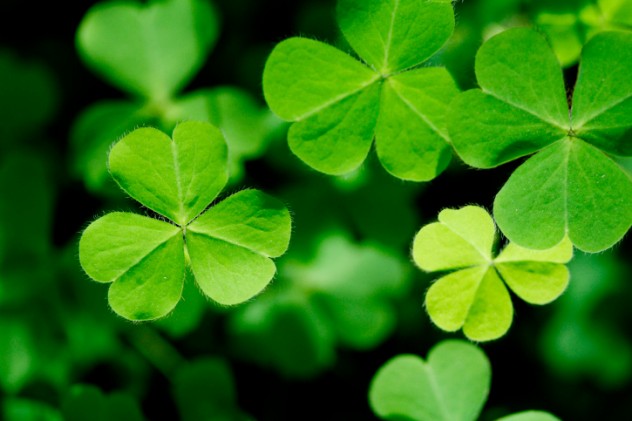 Four-leaf clovers are as much a part of Ireland as St. Patrick’s Day, the country’s renowned hospitality and Riverdance. In the Middle Ages, children believed that carrying a four-leaf clover would grant them the ability to see fairies. Four-leaf clovers were also believed to grant magical protection and ward off evil.

Today there are many more superstitions in Ireland, above and beyond four-leaf clovers. This includes the one of the magpies, and why you should wave at them if their numbers are unfavourable. As the rhyme says:

“One for sorrow, two for joy
Three for a girl and four for a boy
Five for silver, six for gold
Seven for a secret never to be told.”

Should you happen upon one lonely magpie, you must salute it, to break any curse that may settle on you.

Also, if a funeral procession passes you by in Ireland, don’t count the cars. If you do, you will know the exact amount of years you have left to live.
[7] 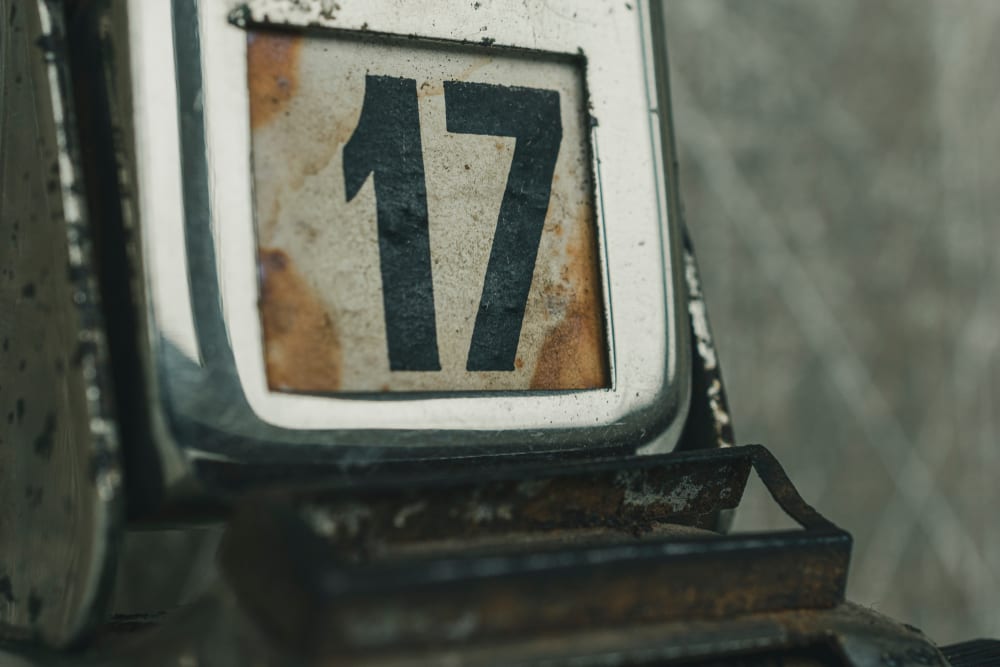 Friday doesn’t have to include 13 for it to be unlucky. In Italy, whenever a Friday the 17th rolls around, they refer to it as a ‘black day’ because 17 is considered bad luck while the number 13 is actually regarded as a good luck charm. It is thought that the negativity around the number 17 was helped along by the belief that the Great Flood took place on the 17th day of the second month. Friday is believed to have been the day on which Jesus was crucified, which led to Fridays also being considered bad luck or cursed.

November 2nd is All Soul’s Day, following on from All Saint’s Day on November 1st. When Friday the 17th falls in November, it is considered the unluckiest day of all and November is then referred to as the ‘month of the deceased.’

Italians are known to carry lucky charms on Friday the 17th, including red horn pendants, horseshoes or the image of an old hunchbacked man and telling the sceptics: “Not on Friday, nor on Tuesday one marries, one leaves, or one starts something.”[8] 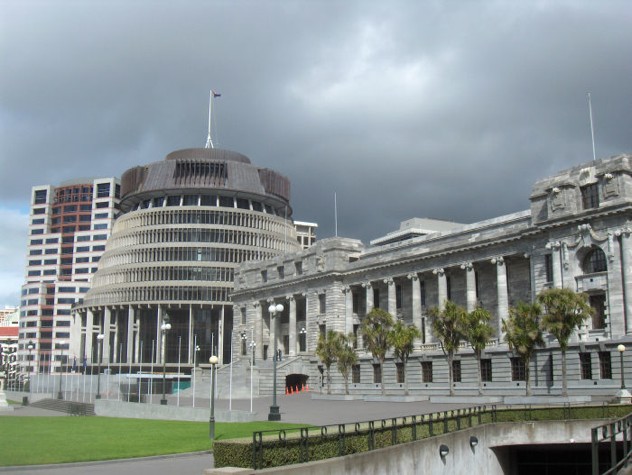 New Zealanders have some of the most unique superstitions in the world, especially when it comes to new homes. Not only is it customary to walk through each room of a new house, carrying a loaf of bread and salt, guests who arrive at the new house should bring salt and coal with them. In order to avoid the disaster of a fire in the house, the shirt of a virgin should be tucked inside a jar and buried in the garden (this is now a rare occurrence due to the lack of virgins in New Zealand).

But before any of these superstitious rituals can be performed, a new house must first be bought, and it is during this process that the number 13 rears its unlucky head. Data compiled in 2016 revealed that 13 seemed to be unlucky for homeowners trying to sell. In Mission Bay, Auckland, homes with No 13 for an address were valued at $390,000 less than their counterparts. In Orakei, houses sporting the number 13 were valued at $350,000 less than the total median.

In other areas such as Glendowie and Northcote, however, 13 seemed to be a good luck charm as here, houses with this number were valued higher than the total median.[9]

Ever heard of the 23rdians? It is a Facebook group for people who are fascinated with the number 23 and who post pictures of the number popping up in their daily lives.

It is alleged that the obsession with the number 23 began with William Burroughs who claimed to have met a sea captain whose ship sank the same day he had bragged about never having had an accident at sea in 23 years. Later that night Burroughs also claimed that he had heard a news report over the radio about a Flight 23 that had crashed in Florida. The pilot had the same name as the sea captain: Clark. Both died. Burroughs became obsessed with the number 23 after these incidents and passed it on to several people including John Forbes Nash Jr, the Nobel Prize-winning mathematician who apparently claimed that 23 was his favorite prime number.

Top 10 Luckiest People In The World