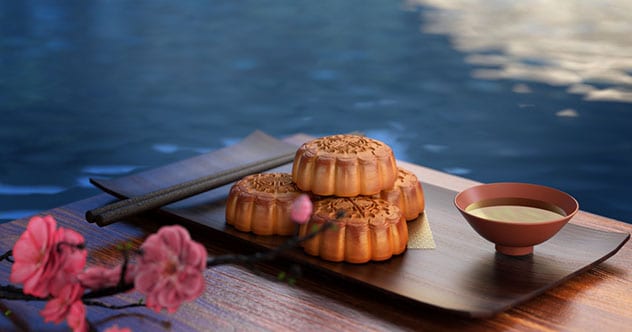 After a rough first winter in the New World, the Pilgrims came together in 1621 to give thanks for a successful harvest. The local Wampanoag tribe came to join them and the two groups celebrated together for several days. Nearly 400 years after the first American Thanksgiving, we hope that everyone remembers how it all started. At the very least, being thankful with family and friends around a table of food is a proper enough way to continue the tradition. In this list, we will take a look at ten other countries with special times of the year for giving thanks.

On the west coast of Malaysia, in the city of Sabah, the month of May culminates with a grand Harvest Festival Celebration. The Kadazan people started celebrating harvest festivals in the 1950s to promote identification with their rice farming background. Rice is a main food in the Kadazan diet; they believe a spirit called a ‘Bambaazon’ is present in each grain of rice. The festival is a time to give thanks to ‘Bambaazon’ for the previous year’s rice harvest.

On the 30th of May, traditional sports competitions like buffalo racing, bamboo stilt racing, and arm wrestling are held. There are also dance, wine, and singing competitions. On the 31st, several different cultures of people from around the area meet at the Hongkod Koisaan building. The day concludes with a crowning of the Unduk Ngadau, or Harvest Festival Queen.[1]

Germany celebrates Erntedankfest on the first Sunday of October. It translates to “thanks for the harvest festival.” Erntedankfest is a way to thank God for the gifts of the harvest. Both the Catholic and Protestant churches mark it on their calendar, decorating altars with wheat and fruits.

Several communities elect a Harvest Queen, presenting her with a wreath of wheat during the Harvest parade. Erntekkrone, the Harvest Crown, is a wreath built on a pole; the base is decorated with paper flowers and ribbon. One of the oldest traditions says that to keep the ‘Grain Demon’ away from the crops, the last few must be weaved together and kept in the house for good fortune. For meals on Erntedankfest, fresh produce harvested from local crops is plentiful. Large-roasted birds are often served, with turkey recently becoming more popular.[2]

A weeklong Jewish holiday that starts five days after Yom Kippur, Sukkot celebrates not only the harvest gathering, but the protection God gave the children of Israel when they left Egypt.

The taking of the Four Kinds is a major observance during Sukkot. Etrog (citron), lulav (palm frond), three hadassim (myrtle twigs), and two aravot (willow twigs) make up the Four Kinds. The Four Kinds symbolize four types of Jews, with various levels of knowledge of the Torah. Bringing the Four Kinds together helps represent the unity as a nation despite differences.

Sukkot is divided into three parts: yom tov comprises the first two days when work is prohibited, candles are lit in the evening, and Kiddush (kosher wine) comes before meals. Chol Hamoed (intermediate days) finds rules a little more lax, leading to time for families to go on excursions. The first of the final two days, Shemini Atzeret, finds people spending time in their sukkah without a blessing. Simchat Torah is the final day. Dancing and singing with the Torah scrolls is followed by nightly candle lighting and a festive meal. In Israel, the final days are combined into one day rather than 2.[3]

Celebrated in South India, Pongol takes place in mid-January and lasts four days. Its name translates to ‘spilling over’ and has been named as such due to a tradition of letting a boiling pot of rice overflow.

Pongol dates back about 2000 years, originating as a Dravidian Harvest festival. It is linked to the Thai Niradal, a major festival during the Pallava dynasty circa 300-900 A.D. During this festival, young girls prayed for rain and prosperity, avoided milk products, did not oil their hair, and refrained from bad language.

In Hindu mythology, the start of Pongol is when the day of the gods begins after a six-month long night. On the first day, known as Bogi Pongol, farmers worship the earth and sun by consecrating their tools and then using them to cut the freshly-harvested rice. Surya Pongol, the second day, is dedicated to the Sun God. The third day, Mattu Pongol, is dedicated to cattle. They are given a day of rest, washed, painted, and decorated as a way of saying thanks for all their hard work. Kaanum Pongal wraps everything up by devoting another day to celebrating the Sun God.[4]

The Harvest Moon Festival, or Mid-Autumn Festival, became an official celebration in China during the Tang Dynasty (618-907). It is believed the holiday was first mentioned in Confucius’s “Book of Rites” more than 2,400 years ago. It was portrayed as a day for emperors to celebrate the harvest by giving offerings to the moon and hosting a giant feast. For thousands of years, it has been a time for families and communities to come together and feast to give thanks for the harvest of crops. The Harvest Moon Festival today is a time for family gathering, a chance for the “people and the moon to reunite and form a full circle.”

Mooncakes are as synonymous with The Harvest Moon Festival as turkey is with American Thanksgiving. The most common kind of mooncake is comprised of lotus seed paste, salted egg yolk, and lard. A palm-sized cake packs close to 1,000 calories! Recently, some believe mooncakes have become more of a gluttonous, commercialized aspect of the holiday. Extravagant mooncake gifts often end up in landfills, pushing them to their limits.[5]

Since 1948, Japan has officially observed Labor Thanksgiving on November 23rd. From as early as the year 678 up until the Meiji Era (1868-1912), the day was a time to say thanks for the great harvests of rice and hard work of the farmers. During the post-WWII American occupation of Japan, Shinto celebrations were abolished and religious aspects of the day were forced into secrecy.

Today, Labor Thanksgiving is a time to be thankful to workers and for their production. Young schoolchildren make cards and gifts for municipal workers. It is also a time to connect with family and friends, enjoying good food and company.

One of the largest events held on November 23rd is the Nagano Labor Festival. It is sponsored by labor organizations and encourages people to think about the environment, peace, and human rights. Hundreds of thousands of Japanese gather at the end of the day to watch the Nagano Ebisuko Fireworks Festival as the last part of their Labor Thanksgiving.[6]

Grenada has only been officially celebrating their Thanksgiving since 1983. In 1979, Grenada’s government was overthrown in a coup. In mid-October 1983, there were multiple changes in leadership causing mass unrest, leading the U.S. to ultimately invade. Grenadians mark their calendars on October 25 to remember when the U.S. helped restore order to their country.

Today, they use their Thanksgiving as a chance to spend time with family, remember Grenadians who are gone, and pay homage to their service in the interest of nation-building.[7]

Tracing back to the late 18th century, the Crop Over Festival comes from a time when Barbados was the one of the largest producers of sugar in the world. The festival celebrated a successful sugar cane harvest. Eventually, the sugar industry in Barbados waned, and the festival along with it. In the 1940s, it was eliminated altogether. Happily, the festival was brought back in 1974.

In today’s Crop Over Festival, a King and Queen are crowned during the Ceremonial Delivery of the Last Canes. They are honored for being the most productive male and female cane cutters of the season. Cohobblopot is a carnival of sorts where bands dressed in elaborate costumes perform. Kids also put on costumes in the Kiddies Kadooment, parading before judges in a competition.

Kadooment Day, signifying the end of the six-week festival, is a national holiday on the first Monday of August. The finale is known as the Grand Kadooment, a carnival parade where bands dress up to represent various themes. Calypso music blares as people reach Spring Garden, an opportunity for food, drink and even a swim at the beach.[8]

The Homowo Festival is a month-long celebration by the Ga people of the Greater Accra area in Ghana. It is a celebration of the harvest starting in May. In pre-colonial times, a lack of rain caused a poor harvest and a terrible famine began. When the rains finally returned, the Ga celebrated by creating the festival.

The festival kicks off with the planting of maize. During the entire month of celebration, city officials enforce a ban on all loud music and noise.) Homowo is closely translated as ‘hoot at hunger’. Loudly denouncing hunger is encouraged.

Many events transpire over the course of the festival. On Twins Day, all twins dress in white calico. Another event is a boat race between warriors known as Asafo groups. A dance called a kpanlogo is also performed during the festival. Other celebrations include marching down roads, beating drums, chanting, face painting, and singing.

Families get together to resolve issues and disputes. They consume Kpokpoi a special meal made from maize and served with palm nut soup. Drink is poured for the spirits and ancestors, while hooting at hunger continues.[9]

The most closely related to American Thanksgiving on the list, The Netherlands celebrates the holiday with respect to the Pilgrims who resided there before leaving for the New World.

Starting near the end of 1607, they began to immigrate to the Dutch Republic where they could practice their religion in peace. Eventually, many of them made their way to the city of Leiden. While their congregation flourished, the lack of education for many Pilgrims made finding work tough. Harsh working conditions, the libertine ways of the Dutch, a potential war with the inquisitional Spanish, and the fact that Pilgrim children were growing up in a different way than their parents meant it was time to move yet again. They decided on the New World, and the rest, as they say, is history.

While the Pilgrims’ time in the Netherlands was barely a blip in American history, the city of Leiden uses Thanksgiving as a time to reconnect with the Pilgrim forefathers. There is an annual Thanksgiving celebration at the Pieterskerk, a Gothic church where one of the Pilgrim leaders, John Robinson, is buried. The mayor of Leiden attends the non-denominational ceremony and addresses the congregation. If you go, be sure to visit the Mayflower Escaperoom nearby![10]