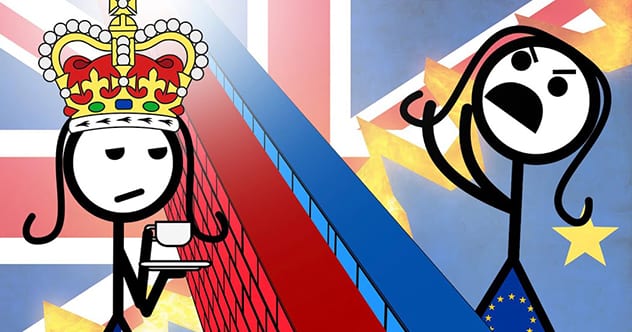 So it is the New Year and you’ve decided you want to get smarter. New Year, new you. But looking at the state of the world around you it might seem like a good idea to stay curled up in your bed. Luckily for you there are dozens of incredibly smart people making informative and entertaining videos on YouTube. Without leaving your bed you can stare at your phone and feel just a little bit cleverer.

Ask any historian and they will tell you that the world is pretty complicated – to say the least. Any time you try to write down history you have to leave things out to construct the story that you want to tell. All history is an act of simplification, it’s just that most histories don’t tell you that they are simplifying. At least the YouTuber OverSimplified admits what he is doing from the outset.

In a series of videos about various historical topics OverSimplified sets out to make history a bit more understandable. In the video dealing with the prohibition of alcohol in the United States you’ll learn both the broad strokes of a complex sociological movement and the fun details. Did you know about a little old lady called Carrie Nation who travelled around smashing up saloons with her hatchet?

As well as big world events OverSimplified also tackles lesser known topics – like the time Australia went to war with Emus, and lost.

Law can seem like a pretty impenetrable topic to research. Latin phrases, arcane procedures, and historical precedents all serve to make law a weird world. Legal Eagle tries to make it all make sense.

While mainly focused on United States law Legal Eagle’s videos serve as a good basis for understanding how any legal system is supposed to work. Recently, for obvious reasons, he has produced a lot of videos on election law that help both Americans and gobsmacked foreign observers comprehend the twists and turns of the 2020 election.

Some of the most ‘fun’ videos are in his True Crime series – from the time the Police blew up a house (and who should pay for the damage) to the famous Leopold and Loeb murder case he tracks how the legal system dealt with each event.

No one can know everything. If you ever fell asleep in class you’ve missed at least some of the facts out there. Luckily for you there is always a video out there for whatever class you snoozed through. And most of them can be found on Crash Course’s channel.

If you need to brush up on your biology then everything from DNA to evolution is covered. If you want some history then you can watch videos going from pre-history to how our media consumption is changing our brains. Yes, even the media put our by Crash Course.

After 2020 you might be feeling depressed, stressed, or anxious. Maybe Crash Course’s Psychology series might be a good place to start…

7 Journey to the Microcosmos

Okay, some topics are just too big for the human brain to comprehend. Unfortunately even when you look at small things things can get a bit complex. And Journey to the Microcosmos studies things that are really small.

It turns out that every drop of pond water is brimming with activity. Tiny single-celled organisms are milling around in their millions and fighting life or death battles that most of us never get to see. To focus on the struggle going on all around us Journey to the Microcosmos turns powerful microscopes on these hidden creatures.

As well as revealing beautiful mini wonders the presenter may just have one of the most calming voices YouTube has to offer.

If you prefer the animals you look at to be a bit more visible to the naked eye then Tier Zoo is the channel for you. As well as looking at weird and wonderful animals this channel does it in a way that will appeal to gamers. By treating the natural world like a game he examines the abilities evolution has developed.

Are Tardigrades playing the game of life on God Mode? Should Dinosaurs be unbanned? And have sloths had their stats Nerfed? Tier Zoo will let you decide. It will also help new players decide which starter animal they should really pick – cat or dog?

Top 10 Ways to Seem Smarter than You Are

Vsauce is one of the biggest science YouTubers out there, and for good reason. While there are plenty of websites out there that promise pictures of hot people (I’m told) only Vsauce will reveal the hottest things in the universe. And most of them you will definitely not want to get intimate with.

As well as physics Vsauce has videos covering why we find things creepy (thing Sonic the Hedgehog with teeth) and why curse words are though of as bad (but don’t say them if you don’t want to get banned).

Some of the more entertaining videos on the channel deal with fun hypotheticals like what would happen if the Earth stopped spinning. And aside from being a logistical nightmare what would be the consequences of everyone jumping at once?

TED Talks have a bit of a mixed reputation. There are those who view the glossy presentations as insightful and a great way to communicate research and ideas to a wider audience. There are also those who think that TED leads to oversimplification and the commercialisation of knowledge. Both may be right. But TED Ed is a channel that produces short introductions to great topics you might want to research further for yourself.

As well as retelling some of the great myths of world culture with stunning animations they tackle topics ranging from the opioid epidemic to common logical fallacies. We could probably all do with a brush up on spotting the tricks other YouTube videos use to convince us of untruths. Or we might end up walking off the edge of the flat Earth.

While there are lots of YouTubers out there who have incredible animation skills they are not always required to make great videos. CGP Grey may not have the most visually stunning videos but they are always interesting and informative. Where else will you find out how to become Pope in five minutes?

Among other topics you’ll find covered on his channel are things like the difference between the UK and Britain, why you actually have two people in your brain, and why domesticating Zebras is a bad idea.

He even did videos explaining Brexit, which even lots of British people might need help with…

If some channels can be accused of dumbing down complex topics that is not a charge that can be levelled at Sabine Hossenfelder. Hossenfelder is not just a YouTuber – she is a physics researcher working on quantum gravity, itself a field that scares other theoretical researchers. So she knows what she is talking about.

Luckily for those intimidated by quantum gravity Hossenfelder tackles ideas in a huge range of fields in physics, and sometimes beyond. You can find out the current thinking on whether there is a smallest size in the universe, how to travel faster than the speed of light, and even if you have free will. Don’t worry, even if you don’t have free will you will want to watch these videos.

And though complex equations often pop up on the screen Hossenfelder will hold your hand as she walks you through them.

Ever wanted to see a nerd pass out in a giant centrifuge? Of course you have and Tom Scott is a YouTuber willing to push his body to the edge in the name of science education. While there is fun in watching the expression on a person’s face as their blood is forced out of their brain and into their buttocks it is also a teaching opportunity. Just what is G-force? And jerk, it turns out, is not just an expression of greeting in online comments.

As well as the science of things like batteries that still work after 176 years and why getting brain eating amoebas in your nose is a bad idea Scott also looks at social issues. Why do Americans find it weird when British people start conversations with “You alright?” And how should GIF be pronounced?

The further you delve into these videos the more topics you discover that you never knew you never knew about. And that is what makes for a great YouTube channel.

10 Books That Will Make You Smarter