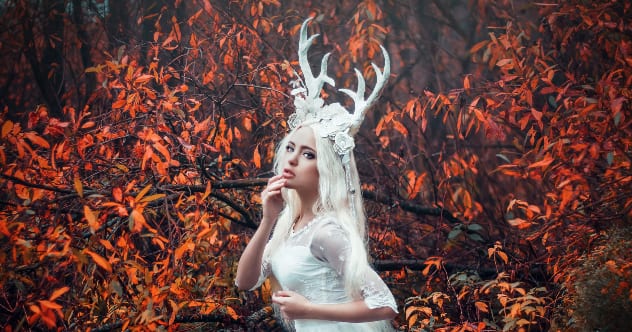 Our legends and histories are filled with mysterious cryptids and terrifying beasts, some of which actually existed. But more often than not, these tales of creepy creatures are just that: tales; imagined beings meant to satisfy a story. Yet, not all farfetched monsters are hoaxes, and there’s enough evidence to suggest that they roam among us. Here are the top 10 creepy creatures that might exist.

The Dobhar-chu is a terrifying cryptid with origins in Ireland. Also called the water hound or King Otter, it is a half-dog, half-fish hybrid but is five times larger than a typical otter. It can swim and also run on land, supposedly as fast as a running horse. The Dobhar-chu hunts in groups or pairs and will chase its prey through water and onto land.

The Dobhar-chu is notoriously aggressive towards humans and dogs and will kill and devour them. The popular legend of their aggression towards humans surrounds a husband and wife from the 17th century. Grace McGloighlin was washing clothes in the Glenade Lough when her husband heard her scream. By the time he got to her it was too late; the Dobhar-chu stood above her mutilated body. He stabbed the creature in the heart. It made a whistling noise as it died, which alerted its mate. The second Dobhar-chu chased the husband down and killed him as well.

Inhabiting the freshwater loughs and rivers of Ireland, witnesses have spotted it throughout the centuries. Though now people believe it is extinct, there is a possibility that they still live on Achill Island.

If underwater cryptids and creepy creatures couldn’t get creepy enough, the mamlambo will have you covering your face every time you jump in the water. The mamlambo is a reptilian-like animal about 6’-7’ long with origins in South African and Zulu mythology. Some witnesses describe it as a giant bioluminescent snake, whereas others make it a hybrid of snake, crocodile, and horse, with four stubby legs.

The mamlambo will attack its prey, including humans, and drag it to the Mzintlava River’s bottom in South Africa. Once drowned, it eats its victims’ faces, cracks their skulls, and devours their brains.

The mamlambo has been sighted by villagers who live near the Mzintlava River for a long time. However, police have disputed these sightings, relating the deaths to drowning caused by the river’s swelling during the heavy rain season. They explain that the disfiguration of the victim’s faces was merely caused by river crabs that ate away at the body’s flesh over time. Still, villagers stand by their claims that the mamlambo exists.

Add deer women to your list of femme fatales of legend. For North American Central Plains and Woodland Native American tribes, deer women are mostly a benign spirit. They usually appear to women as a sign of fertility as a human, deer, or a mix of the two. Occasionally, they’d appear to promiscuous men and adulterers, seducing them and then leading them to their death or everlasting lovesickness.

In contemporary tales among the native tribes in Oklahoma, deer women are much more violent. These deer women appear as young women but have hooves for feet and deer eyes. They lure men to them and then trample them to death. Some say that Deer Women are women who transformed after being raped or were brought back to life by an original Deer Woman spirit. Regardless of the Deer Woman’s origins, there are documented sightings by an incredibly large amount of Native American tribes.

There’s nothing like the classic tale of this blood-sucking, livestock-preying, reptilian creature. First spotted in Puerto Rico in 1995, the chupacabra—or goatsucker—preys on livestock and sucks their blood. It is as large as a small bear and has a series of spiny protrusions that run the length of its back. It stands and hops like a kangaroo and has greenish-grey leathery skin. A more “normal” variation of the creature looks like a wild dog. All blood-drained victims have two or three puncture wounds on the chest or neck. Since the first sighting, people have also reported having seen it in Maine, northern Mexico, Russia, and Chile.

Wildlife experts and biologists refute the existence of the chupacabra. Instead, they claim that what witnesses are actually seeing are coyotes with mange or Mexican hairless dogs. Still, there is a good chance that a “chupacabra” does exist, just not in an alien way. Footage shows a strange dog with an especially large head, believed to be a chupacabra, running down a dirt road. In 2010, a chupacabra was killed by animal control, which turned out to be a coyote-dog hybrid with mange and parasites.

What the witness spotted in 1995, though, was certainly no hairless dog. It was a thing of nightmares.

It isn’t Slenderman, and it’s not a ghost; it’s Black Stick Men. Black Stick Men are long, two-dimensional slender figures. They are abnormally tall, sometimes electrified, and cast no shadow. Black Stick Men are a fairly recent phenomenon, and plenty of sightings are confirmed hoaxes. However, one cryptozoologist named Marc Wolfgang Miller spotted six of them in Buford, Wyoming. He attempted to photograph a 12’ tall stick man, but the creature did not clearly appear in the photo.

The Fresno Nightcrawler is a white, bipedal creature with an extremely small torso, round head, and no arms. Most of its body is its legs. People once thought that the Fresno Nightcrawler was a Native American legend, but this is untrue, meaning that we can best describe this creature as some sort of alien. First spotted in Fresno, California, on a home security camera, it’s only been seen one other time, in Yosemite National Park.

The name may be funny, but the creature is far from silly. Based on Germanic superstition and spotted by residents of Frederick County, Maryland, the snallygaster is a dragon-like creature—half-reptile, half-bird—with razor-sharp teeth. Early stories of the snallygaster sometimes give it octopus and vampiric characteristics.

In 1909, the legend became a reality. After encounters with the beast started appearing in newspapers, the creature showed up everywhere, from New Jersey to Ohio. Eyewitnesses reported that the snallygaster had an eye in the middle of its forehead.

The same year, a terrifying account of a man snatched by the snallygaster and drained of his blood caught the attention of the Smithsonian Institute. The Institute would offer an award for anyone who could produce the hide of the animal. But the story was so terrible that President Theodore Roosevelt even considered postponing his trip to hunt it.

The last account of the snallygaster comes from Washington County, Maryland. Apparently, the beast was overcome by moonshine fumes and fell from the sky into the still. Revenue agents soon destroyed both the vat and the body of the snallygaster. No one has seen it since.

In 1903, I.W. Stevens encountered a humanoid creature in the Grand Canyon covered in grey hair with a beard that reached its knees. It had talons that were two-inches long and was drinking the blood of two cougars. Almost 40 years later, cryptozoologist Don Davis encountered the same humanoid creature while on a Boy Scout trip. The massive beast had deep-set, expressionless eyes.

This is the Mogollon Monster. It walks with abnormally long strides, can imitate animals’ sounds, and has a terrifying scream. People still see the Mogollon Monster, including several people on the Fort Apache Indian Reservation. Biologists challenge its existence despite footage and organic samples.

Here’s a creepy creature that is not only creepy but shy, too? The Mantis Man is a 7′ tall insect-like creature that mostly resembles a praying mantis. Definitely not a creature for the entomophobic! Both reports of its encounter state that it was wading in the Musconetcong River in New Jersey. This is quite unlike the praying mantis we know—the mantis doesn’t spend its time near water.

Between the creature’s location and the fact that Earth’s atmosphere can’t grow a bug that large leads people to believe that the Mantis Man is an aquatic animal. Either that or it could be an alien. Whatever it is, should you encounter it yourself, you won’t have to worry about it attacking you. All reports claim that it runs away when you get too close.

On a cold night in autumn in 1965, the infamous Mothman visited Point Pleasant, West Virginia. While preparing for a burial, five men saw something fly from the trees. What they saw wasn’t a bird, but rather a terrifying humanoid. Mothman doesn’t resemble a moth. It is about 7′ tall with a wingspan of 10’-15′ long. It has two glowing red eyes in the center of its chest and shuffles like a penguin when it folds its wings. Those who look into its eyes or catch a glimpse of its face report feeling a sense of dread, psychological distress, and overwhelming evil.

Some believe that Mothman warns people of impending disasters. Others think it is an angel, demon, or the result of a curse. Although people have spotted Mothman regularly since 1965, it is still largely considered a legend—or the mistaken identity of a sandhill crane.

And those are ten creepy creatures that might exist. If you’re fortunate—or unfortunate—enough to come across one of these creatures, be sure to catch a photo. You’ll have to prove it’s not a hoax.