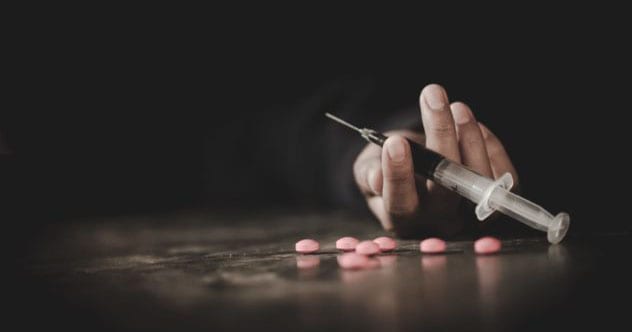 Many drug users and those struggling with a specific activity addiction find themselves uncomfortable and unable to manage the addiction. Addiction does and most likely will ruin an addict’s life if they use narcotics or continue their desired activity for an extended period. Every year, millions of drug users and activity addicts in America become impacted by their addiction to the point that tens of thousands of deaths happen each year.

But some addictions have stronger withdrawal symptoms than others, causing discomfort to the user while taking the drug or doing the activity, thwarting any attempts to quit. Here is a list of the top ten most uncomfortable addictions.

While gambling, having sex, shopping, or eating certain foods, dopamine levels in the body become altered, similar to what happens when using narcotics. However, psychological dependence can contribute to their mental or even physical discomfort.

Process addictions are prevalent in society, going mostly unrecognized and with most sufferers unable to stop.

While many states and countries continue to legalize marijuana for recreational and medical uses, consumption has risen due to its availability and increased potency. Weed or ganja is the most used substance, and many people struggle with the uncomfortable addiction to its active compounds.

Continued use, and as a result, higher amounts of endocannabinoids creates brain dependency on marijuana. Naturally produced neurotransmitters are interfered with, and reduced sensitivity means that over four million Americans are diagnosed with cannabis use disorder, according to the CBHSQ or Center for Behavioral Health Statistics and Quality.

In the absence of benzodiazepines, the body lacks large quantities of dopamine. This drop in dopamine causes severe depression, irritability, and confusion. Other discomforts include nausea, stiffness, painful muscles, sweating, sleep and concentration problems, heart palpitations, and panic attacks.

Nicotine is among the most common addictions. Tobacco smoking is the primary source of available nicotine and is an uncomfortable one to quit. Cigarettes and other tobacco products are primarily legal, and as such, their addiction is prevalent among millions of Americans and many others around the globe.

Signature nicotine addiction telltale signs include cravings—discontinuity results in irritable and anxious behavior. When inhaled or ingested as chewable tobacco, nicotine elevates the heart rate and goes to the brain, causing a perceived state of temporary relaxation.

The almost immediate withdrawal symptoms are uncomfortable for users, but nicotine can become an emotional crutch that addicts reach for when anxious. Smoking and other nicotine delivery forms are filthy habits that soon lead to emphysema or lung cancer, resulting in a painful demise.

Not only is cocaine one of the worst addictions in the US, but it’s also significantly misrepresented. Over 1.5 million users suffer from an addiction to cocaine, although the number has declined from its popularity in the 1980s.

A social drug, cocaine in its original form, can boost energy and creates a positive mood, albeit with short-lived effects. Users become addicted to constant use, especially while working or partying, and the habit can be challenging to kick.

Cocaine acts to alter dopamine and serotonin build-ups, shutting down the brain’s normal processes. The feelings of behavior reinforcement, pleasure, or desire are quickly replaced by paranoia, mood swings, and other emotional or physical tolls.

Symptoms of withdrawal include restlessness, intense cravings, irritability, nightmares, agitation, and general discomfort, while acute symptoms can also cause patients to harm themselves.

Methadone is a drug used to minimize opiate withdrawal symptoms, but users can often become addicted without proper medical supervision. Methadone helps opioid and heroin addicts get past the most painful phases of recovery. Dangerous tolerances occur when methadone is taken for years. Addiction to this drug prompts abusers to take high doses, resulting in over 40% fatal opioid pain relief overdoses in many states.

Withdrawal symptoms for methadone kick in after a few hours, leaving users with intense symptoms of restlessness, anxiety, and flu-like reactions. Symptoms can last from three hours to over a few weeks of uncomfortable agony.

Like benzodiazepines, the brain tries to regain homeostasis with alcohol, resulting in DT hallucinations, extreme confusion, delirium, and tremors or seizures. Victims will experience continued anxiety, insomnia, irregular heartbeat, high blood pressure, depression, and headaches that may last long after the last dose.

Derived from the original form of powdered cocaine, crack is a powerful stimulant with an intense euphoria replaced by a compulsive craving. Easy to create, crack cocaine emerged in the US during the 1980s, an inexpensive but highly addictive alternative to heroin.

A psychological dependency for this substance makes it hard to quit abusing, coupled with the high tolerance, which builds up quickly. The drug has at least three recovery stages, but many users relapse due to cravings’ reappearing years after believing they’ve kicked the habit.

Crystal meth, known as methamphetamine, is a highly addictive synthetic drug made with pseudoephedrine, a common substance used to make cold medication. This human-made stimulant can be snorted, injected, or smoked, giving users a potent high followed by an almost immediate and equally forceful craving.

Meth is hard to quit, and most addicts risk significant neurological damage, not to mention severe exhaustion and depression a crash brings. Users that develop a dependence on this drug can’t manage their life or even have a moment of joy without it.

Long-term methamphetamine use leads to brain damage, preceded by emotional regulation and memory problems. The use of this drug is accompanied by aggressive, violent, and often psychotic tendencies, while medical detox uses anti-anxiety, anti-psychosis, and antidepressants to re-regulate brain chemistry.

Heroin is derived from morphine and is an illegal opiate produced by a poppy flower species, and users experience intense euphoria and powerful cravings. Addicts of heroin will smoke, inject or inhale its vapors while the drug quickly hits the brain, causing behavioral alterations.

Being an illicit narcotic, heroin dealers usually ‘cut’ or mix it with toxic additives to increase its potency. These additives, some of which are opiates themselves, cause many overdoses, as the street buyer can’t tell the purity of the heroin short of doing a chemical analysis.

Heroin addictions and the resultant egregious withdrawal symptoms cause physicians to prescribe other barbiturates to ease discomfort. Like buprenorphine and methadone, these remedial drugs are highly addictive and can result in new addictions without a doctor’s guidance.

The most addictive and abused medicines, prescription opioids, include oxycodone, Vicodin, and codeine. Addicts that abuse opioids get feelings of euphoria and pleasure as the drug attaches to brain receptors to block pain transmission signals.

It’s the severity of withdrawal symptoms that keeps many sufferers addicted to prescription opioids. Symptoms are uncomfortable, and this period’s length will depend on how long a user has been an addict.

Several factors constitute the severity of an addiction. These factors measure how uncomfortable that addiction is. Addiction to substances and activities will depend on a person’s genetic makeup, environment, family support, mental illness, and trauma.

Repeated use or involvement in the following will become uncomfortable once you’ve developed a tolerance, which leads to dependence. These addictions take hold of individuals while they are unaware of the harm caused, but they resort to continuing the abuse to escape withdrawal discomfort.

Getting Help for an Addiction

Addiction brings chronic brain overstimulation, and the brain then has to create a new balance set point to maintain homeostasis. This adaptation is due to the brain’s capacity to adjust, setting new balance points through a process known as allostasis. The changes that result from allostasis are what is associated with the behavioral patterns observed in addicts. These include the need to continue with harmful drug use or activities, despite harming yourself or your loved ones.

When an addict recognizes that they have a problem, the road to seeking help and recovery has begun, although not all routes are the same. A medical doctor’s diagnosis is then necessary to correctly estimate the substance or activity addiction stage to make the proper treatment recommendations.