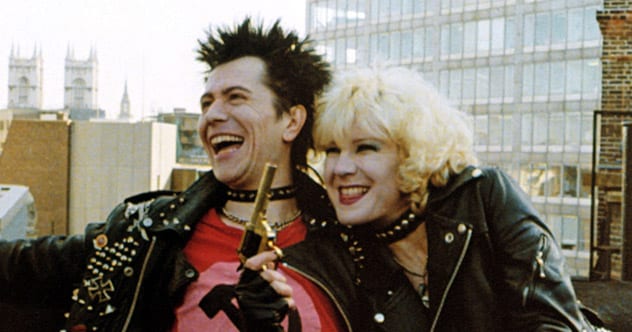 Sid Vicious was a punk rock icon, former bassist in the Sex Pistols, a heroin addict, and a suspected murderer. In 1978, his girlfriend, 20-year-old Nancy Spungen, was found murdered on the bathroom floor of the Chelsea Hotel room they shared in New York City. Less than four months later, Sid died of a fatal heroin overdose. His death came as a surprise to very few people.

Sid infamously once said, “I’ll die before I’m 25, and when I do I’ll have the lived the way I wanted to.” This is the tragic timeline of his misfortunate life and doomed 19-month relationship with Nancy.

Top 10 Bizarre Musical Genres That You Need In Your Life

10 Master of Self Destruction

Born Simon John Ritchie on May 10th, 1957, the punk rocker would not become ‘Sid Vicious’ until two decades later—when his true nature was revealed. Shortly after his birth, he moved with his mother, Anne Beverley, from London to Ibiza. It was expected that his father would later join them but after failing to send any maintenance money; it was obvious he was not going to be part of the family picture.

Abandoned by his father, Sid and his mother lived a rather bohemian-like lifestyle and it’s believed she also began taking drugs throughout his childhood. Eventually, they moved back to the UK but the quiet town of Tunbridge Wells, Kent, did not suit the future anarchist.

During his teenage years, Sid turned to self-harm. A close friend from childhood revealed, “(Sid) had a weird, brooding quality. He would loon about, he was very bright, but he had another side. He was very hurt, I now realize. Even then he made me feel cautious. An hour or two of his company was enough.”

At the age of 17, Sid gravitated towards the rock scene in London. Sid was a drummer for Siouxsie and the Banshees and Flowers of Romance before he was considered as lead singer for The Damned but had failed to show up for the audition. Sid later threw a glass at The Damned band members which missed and left a girl in the audience partially blinded.

In 1977, Sex Pistols band members—vocalist Johnny Rotten (real name John Lydon), guitarist Steve Jones, and drummer Paul Cook—needed to find a replacement following the departure of bassist Glen Matlock. Sid seemed like a convenient solution considering he was in the crowd at every Sex Pistols gig anyway. Rotten christened him with the name Sid Vicious inspired by his own pet hamster who was prone to violent attacks.

What Sid lacked in musical talent he made up for with stage presence and the fans loved him. Band manager Malcolm McLaren said, “If Rotten is the voice of punk then Vicious is the attitude.” It was a reputation that Sid spent the rest of his life living up to.

Nancy Spungen was born into a middle-class Jewish family in Philadelphia. Growing up, she was hyperactive and described by her mother as a “difficult child” who was prone to screaming tantrums.

In her memoir ‘And I Don’t Want To Live This Life: A Mother’s Story Of Her Daughter’s Murder’, Deborah Spungen writes, “A 7-year-old ran our household. When she wanted something, no matter how big or small, she hollered and screamed and backed us into a corner until we were the ones to back down. We gave in to her. Why? Because there was absolutely no peace in the house until she got what she wanted.”

By the age of 16, Nancy had spent time in a mental institution and was diagnosed with schizophrenia. Nancy fled to New York City and landed right in the middle of a heroin epidemic that was blowing at the time. To support her addiction, she became a topless dancer and also worked as a prostitute. She was known amongst punk rock bands as a groupie who could score drugs.

Nancy followed band members Johnny Thunders and Jerry Nolan of the Heartbreakers to London but after landing they decided to shake her off pretty quick. Nancy next moved on to Sid Vicious and the pair fell dangerously in love.

In 1977, Sid appeared at a gig with a young, blonde he introduced as his girlfriend Nancy. Instantly, the band took a dislike to her and Jones recalled, “She showed up with Sid and I was thinking—who the f*** is this? This is a horrible person.”

Nancy taught Sid all about the sex, drugs, and the punk rock lifestyle in New York City. Despite the pair being a terrible match for each other, they quickly became inseparable and it wasn’t long before Sid was fully hooked on heroin. According to one witness, Nancy had instructed Sid to push another groupie down the stairs at a gig and he had happily obliged.

In ‘Please Kill Me: The Uncensored Oral History of Punk’, the Heartbreakers tour manager Leee Childers said, “(Nancy) was a junkie, a drug supplier, and an all-around lowlife. … She was a very bad influence on people who were already a mess. She was a troublemaker and a stirrer-upper.”

Eventually, band manager Malcolm McLaren found Sid at Linda’s flat and dragged him out. It was quite obvious Sid had been in the middle of an excessive heroin binge and McLaren sent him home to his mother to straighten out.

Six days later, Sid’s mother is extremely concerned for her son’s health as he is starting to turn a rather disturbing shade of yellow. He was rushed to St. Anne’s Hospital, Tottenham, where doctors confirmed he had contracted hepatitis from using dirty needles. Sid was ordered to stay in the hospital for four weeks.

During his stay at St. Anne’s Hospital, Sid missed a pivotal moment in the Sex Pistols career. A&M dropped the band from their record label after just one week and they were instead signed to Virgin Records. Sid’s signature is missing from the Virgin contract and they recorded most of the new album without him as Steve Jones stepped in to cover the bass parts.

Despite the Sex Pistols gaining notoriety with a string of successful mainstream singles like May 1977’s “God Save the Queen” and July 1977’s ‘”Pretty Vacant”; Sid was still a mostly absent member of the band. Instead, he preferred to be with Nancy in their west London apartment sinking into a heroin-induced coma.

Later, McLaren admitted to plotting to have Nancy “kidnapped” and put on a plane back to New York. The only flaw in his plan was Sid never let Nancy leave his sight.

One night, Nancy stops a suicidal Sid from jumping out of a hotel window and he violently attacks her. Blood is drawn and the police attend the scene. There are no charges but the band has had enough—it’s them or Nancy. On January 4th, 1978, there was so much tension in the Sex Pistols that they were forced to finally split.

Sid and Nancy moved into The Chelsea Hotel in Manhattan, New York City. Nancy decided that she was going to become Sid’s manager and help promote his solo career. Although she was successful in landing her boyfriend a string of gigs at Max’s nightclub in Kansas City; it wasn’t long before Sid began sabotaging his own career again.

The fun they both had in London together was not the same experience in New York City; as heroin was far more accessible, their addiction spiraled out of control. Deborah Spungen’s mother, “I think—towards the end—(Nancy) suddenly began to see things more clearly and realize how far she had gone. She was in a box and there wasn’t any way out.”

Watching Sid’s potential diminish due to his self-destructive personality caused even more tension in the relationship which very soon would come to a tragic end.

3 The Murder of Nancy Spungen

On the night of October 11th, 1978, there were many visitors—mostly unsavory characters—coming and going from Sid and Nancy’s room at the Chelsea Hotel. Witnesses say they saw Sid take as many as 30 tablets of the powerful sedative Tuinal which is a dose many people would not be able to survive. He allegedly entered into a deep state of unconsciousness and remained comatose until the early hours of the morning.

The following morning, Sid claimed he had awoken to find Nancy dead. She had suffered a fatal stab wound to her abdomen and bled to death on the bathroom floor. Sid was found wandering the hallways of the hotel in an agitated state.

When the police arrived, Sid gave conflicting versions of the events that had taken place before the murder. He first stated that he stabbed Nancy, then said he didn’t stab her, and even at one point, he told the police that Nancy had “fallen onto the knife.”

Trapped in a nightmarish situation; Sid was charged with murdering his girlfriend but due to the number of barbiturates in his system, he had no recollection of the attack.

Spending 55 days in a jail cell at the Rikers Island Detention Center meant that Sid had to go through an agonizing heroin withdrawal process. Typical symptoms of extreme withdrawal include vomiting, insomnia, night terrors, diarrhea, abdominal cramping, and muscle aches.

Leaving the detention center, Sid was escorted to the New York Criminal Court where he met with lawyers who were certain they could get him off the charges. They argued that Nancy was murdered by a drug dealer who wanted Sid’s cash.

Sid’s lawyer James Merberg said, “There were a number of other people who lived in the area, in the hotel, and who were supplying drugs to these people who had opportunities and access to these people. It was not unlikely that someone could have could come in and attempted to assault them. We were very optimistic that the prosecution would not be in a position to prove beyond a reasonable doubt that (Sid) was responsible.”

This defense also coincided with the missing $25,000 in cash from the hotel room which was a royalty payment from Virgin Records. Sid’s mother posted the $50,000 bail and left the court with her son. Within 24 hours, he would be dead.

1 Romeo and Juliet of Punk Rock

On February 1st, 1979, Sid celebrated making bail with a group of friends at an apartment on 63 Bank Street, Manhattan. During his time in prison, he had been placed on a detoxification methadone program and now his top priority was to immediately get his hands on a fix. The following morning, Sid was found dead following a heroin overdose at the age of 21.

In an interview in 2014, Johnny Rotten said, “(Sid) didn’t stand a chance. His mother was a heroin addict. I feel bad that I brought him into the band, he couldn’t cope at all. I feel a bit responsible for his death.”

After the funeral, his mother found a suicide note inside one of Sid’s jacket pockets. It read: “We had a death pact, and I have to keep my half of the bargain. Please bury me next to my baby. Bury me in my leather jacket, jeans, and motorcycle boots. Goodbye.” With Sid now unable to stand trial, there is only speculation but many believe the couple had made a Romeo and Juliet inspired suicide pact.

Sid was cremated at Garden State Crematory in New Jersey. His mother traveled to Pennsylvania and asked for her son’s ashes to be scattered over Nancy’s grave where she was buried in a Jewish cemetery. This request was denied.

Cheish Merryweather is a true crime fan and an oddities fanatic. Can either be found at house parties telling everyone Charles Manson was only 5ft 2″ or at home reading true crime magazines. Founder of Crime Viral community since 2015.