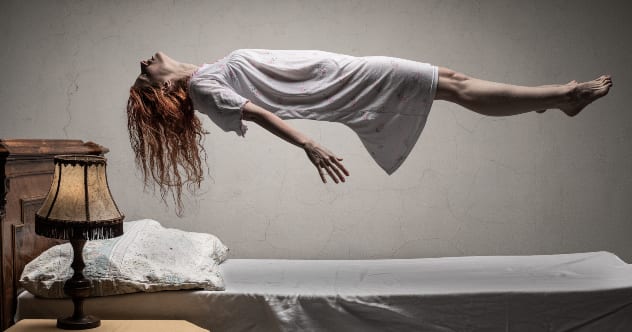 Science has long explained the human predilection for horror stories. Biology! The emotion of fear stimulates the production of endorphins, serotonin, dopamine, and oxytocin, which is why we feel curiously good despite getting the bejesus scared out of us. What they haven’t explained is why tales of demonic possession seem to have royalty status. Perhaps it’s the fact that everyone is a candidate for possession, as odd as that sounds. which automatically ups the fear factor and, therefore, the rush of the narcissistic hormones.

Here are the 10 best demonic possession stories ever told in the history of this dark, harrowing phenomenon.

Amy Stamatis was living a normal life as a medflight nurse at the Baptist Health Medical Center in Little Rock, Arkansas. She had a loving husband who supported her in everything and kids who looked to her as their hero and best friend. One day, she leaped from the second story of her Searcy home, and her life fell crashing to the ground, broken as the bones in her body. She is paralyzed from the waist down, unable to work and indulge in her noble passions. She still swears she didn’t jump out the window that day.

It all began on a typical day at work when Stamatis was attending to a burn patient. After leaving the room to return to her station, she found herself wandering aimlessly in the halls of the hospital. A marathoner, she would soon lose her ability to walk straight. Doctors blamed it on epilepsy, schizophrenia, and porphyria (a rare chemical imbalance), but Pentecostal evangelist Cindy Lawson saw something else: demons. As soon as she heard of Stamatis’ story, Lawson approached the family, buckled down to work, and banished the forces for good.

In 1906, 16-year-old Clara Germana Cele entered into a contract with the devil—and confessed to it. She said she made at Marianhill school in Umzinto, South Africa, where she lived since her parents’ death. Weeks after the pact, Cele began ripping her own clothes, speaking ancient languages, and making guttural, beastly sounds. During her exorcism, her skin boiled in contact with holy water, and her body levitated several times before the eyes of 170 witnesses.

According to an account, Cele writhed and squirmed across the ground, her body limping out completely at one point as though becoming the slithering serpent. Based on another account, she actually turned into it, if only for a few seconds. After two days of grueling exorcism, the girl was liberated from the devil. The pact was broken on September 11, 1906, but not without almost killing her and the priests who were determined to salvage her soul. They succeeded for the demons never returned.

On May 31, 1778, a woman named Mrs. Sarah Barber traveled to the Yatton Village in Mendip, Somerset, and summoned Rev. Joseph Easterbrook of Temple Church. She said she knew a man she felt was afflicted with an odd infirmity, a tailor named George Lukins who would sing and scream with different voices that barely sounded human. Because of his bizarre behavior, Lukins eventually ended up at St. George’s Hospital, where he was confined for over five months. He was pronounced incurable by the doctors.

Mrs. Barber, the entire community, and Lukins himself believed he was bewitched. He even declared he had 7 demons in his body that required 7 clergymen to expel. On Friday, the 13th of June 1778, seven clergymen led by Rev. Easternbrook, cast out seven demons in a strenuous ritual where Lukins sang Te Deum (an important Christian hymn) in reverse, became increasingly violent, and claimed he was the devil. Once delivered, his mood immediately changed as he praised God and recited the Lord’s prayer before thanking the priests who saved him. 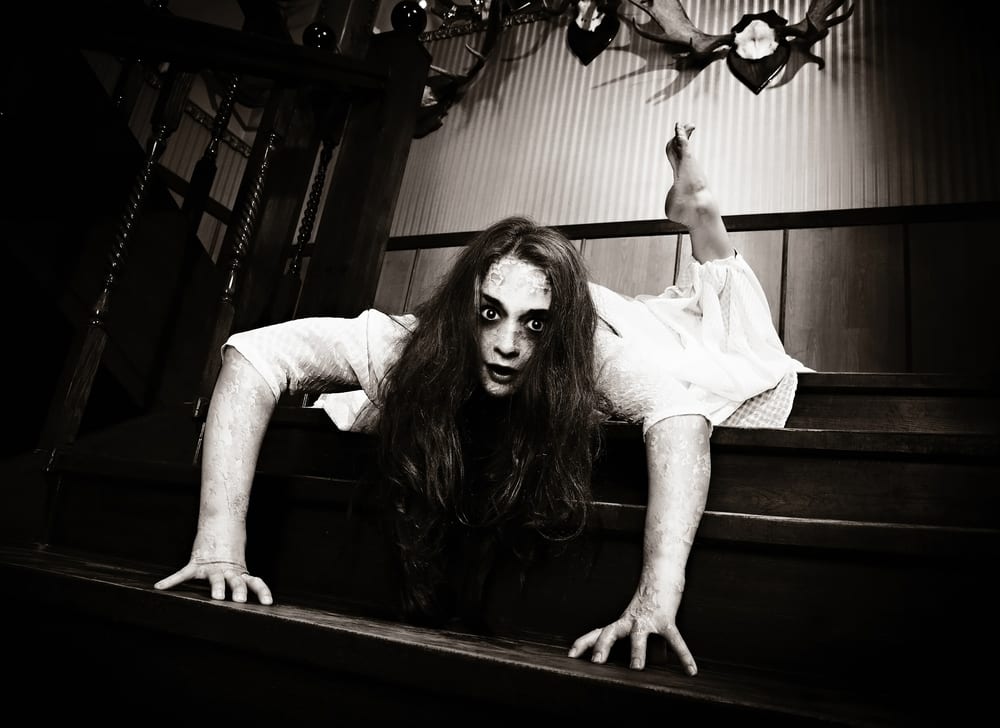 In 1842 Germany, a 28-year-old woman became the center of attention in her neighborhood when strange things happened in her home. Gottleibin Dittus would soon slide in and out of trances, but her possession wouldn’t become so patent until Lutheran pastor Johann Christoph Blumhart began a rite of exorcism. Dittus turned extremely violent and vomited all kinds of matter, from nails to blood. Her ber body convulsed, levitated, and disappeared behind shadows while she screamed about hell and its occupants.

In her lucid episodes, she would ask Jesus to save her from her tormentors. Finally, in 1843, Pastor Blumhart freed the woman from her spiritual captors, and she reported feeling an overwhelming sense of peace. Her demons had left, and she happily announced it to everyone by exclaiming, “Jesus is victor!” Pastor Blumhart went on to report her case to the church as a “ghost fight,” and Dittus’ loud cry at her moment of healing became the pastor’s epigram.

In January 2005, 23-year-old Maricica Irina Cornici joined the Tanacu monastery in Romania. Not long after, she started exhibiting strange, erratic behavior, leading to her confinement at the local psychiatric hospital. By April, she was diagnosed with schizophrenia, but her brother had another explanation. He claimed he saw Satan himself entering his sister’s body, which meant that his sister was in demonic possession. With monastery priest Fr. Daniel Petre Corogeanu sharing the same view, an exorcism was immediately in order.

Cornici herself believed she was possessed and begged the nuns to strap her down and help her. Chained to a cross, the embattled novice was anointed with holy oil and kept in the church for three days. She was then untied and given food before fainting and eventually expiring in an ambulance. Her death put Fr. Corogeanu and four nuns in jail for murder and depriving a person of liberty. A 2005 autopsy report said Cornici died of dehydration, exhaustion and lack of oxygen. In 2014, experts confirmed that she had had an overdose of adrenaline in the ambulance, which caused her death.

Born to a devout Catholic family in Bavaria, West Germany, Analiese Michel was as religious as any young woman could be. Analiese had a history of mental illness, but once her “symptoms” wriggled out of control despite strict medication, she knew she could only be possessed. Her first experience was at the age of 16 when she completely blacked out at school and walked around in a seeming trance. When she developed hallucinations and delusions, she decided to seek the help of the Catholic Church.

Despite repeated rejections from the Bishop, Michel finally received an exorcism in 1975 through local priests Ernst Alt and Arnold Renz. But by this time, her condition had plunged into the unthinkable. She would strip herself naked, perform around 400 squats every day, and even bark like a dog for days. After 11 months, she died of malnutrition and dehydration. Her two exorcists were charged and sentenced to six months in jail for negligent homicide for failing to call a medical doctor. Her parents were also charged but spared from punishment, the judge ruling that they had “suffered enough.”

After her spiritist mother’s death, provinciana Clarita Villanueva ventured into the Philippine capital of Manila in search of her birth father and a job. That she would end up in jail for vagrancy was the farthest from her mind, but nothing prepared her for what came next: two demons biting into her skin. When experts declared her mentally sound, the more the public was convinced she was possessed. The woman’s story made the rounds worldwide until it caught the attention of an American pastor named Lester Sumrall, who instantly called himself to the mission and flew to Manila to help.

On May 19, 1953, Sumrall met Villanueva for the first time in a meeting marked by blasphemous statements from the Bacolod native. When Manila Mayor Arsenio Lacson heard about the woman, he asked to see her alone to witness the bite marks himself. He wasn’t disappointed. According to an account, Villanueva’s exorcism continued for three days before she was completely delivered from her demons—a total of 15. Finally free, she returned to her province, married a farmer, and had kids.

Elizabeth Knapp was a 16-year-old servant at the household of Samuel Willard, a prominent Reverend in the church of Groton, Massachusetts during the 1670s. What made Knapp’s possession unique from the others was Williard’s scientific approach—a point of issue for the community, given the pastor’s passionate teachings on damnation and divine obedience. From October 30, 1671, until January 12, 1672, Willard documented Knapp’s deterioration, which had most of the characteristics found in other demonic possessions – fits, hallucinations, body contortions, animal sounds, a deep voice, meeting with the devil, and so on.

On November 28, Knapp had a fit that lasted for 48 hours, after which she remained in catatonia until December 8. She confessed to being assaulted by the devil and having no recourse but to make a pact with him. At this time, Willard said the devil talked to him through Knapp, calling him a rogue minister. Willard’s next entry was dated January 10, 1672, when the girl admitted that the devil had completely taken over her body. She had been quiet since January 15, and Williard decided to leave the matter to the “more learned, aged, and judicious.” Whatever happened to the servant girl has remained a mystery to this day.

The world’s most widely documented demonic possession that landed in the 1936 issue of Time magazine, is that of Emma Schmidt, also known by her pseudonym Anna Ecklund. Schmidt was an American woman born March 23, 1882, in Switzerland and raised in a Catholic household in Marathon, Wisconsin. When she turned 14, she began taking to unspeakable sexual acts and speech and became averse to everything blessed or religious, including churches. In 1935, it was revealed that her aunt Mina, a purported witch and lover of her father, Jacob, had cast a spell on her through the food she prepared for the young girl.

At the age of 30, Schmidt was exorcised for the first time by a Capuchin priest named Fr. Theophilus Riesinger. The same priest took two more attempts before the demons were finally cast out on December 23, 1912, at a Franciscan Sisters’ convent in Earling. Schmidt herself identified the demons that possessed her – Beelzebub, Judas, Mina, and her father, Jacob. It is said that Jacob cursed his own daughter for refusing to have an incestuous affair with him. Schmidt managed to live a relatively normal life after that and died peacefully at the age of 59.

“The Exorcist” has been terrifying moviegoers since 1973, and largely because it is based on true events. In the late 1940s, Ronald Hunkeler, a 13-year-old boy mourning his spiritist aunt’s death, started having strange encounters with the unknown. He would hear scratching sounds on the walls of his room and water dripping down pipes and walls. When his bed moved on its own, his parents sought the help of a local Jesuit priest, Fr. E. Albert Hughes. The priest performed an exorcism on the boy in February 1949, but unfortunately, it was unsuccessful.

Soon, scratches started showing on Ronald’s body and his screams became louder than ever. The last straw came when he urinated all over his bed and started cursing at his two new attending Jesuits. His parents decided to bring him to the Alexian Brothers Hospital in St. Louis for “more serious treatment.” On April 8, Monday after Easter, the attending priests covered the boy in holy relics, medals, and other blessed objects, and he slowly returned from his trance, proclaiming, “He’s gone,” referring to Satan.