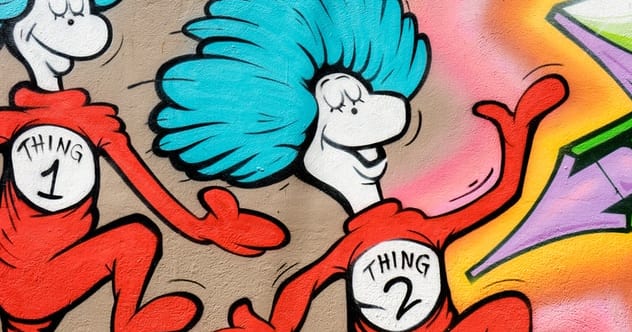 Whether his books inspired you to read or try green eggs, Dr. Seuss has become a household name for generations. Although well-known to many as the author of their childhood, Theodore Geisel was much more than the man behind the rhyme. Throughout his life, he created content that was entertaining and odd, but occasionally controversial and, at times, racist. Many of his published works drew on his own lived experiences, both positive and negative.

Because of this, the Dr. Suess estate recently announced that it will stop printing any of his books that contain harmful, racist images. Out of the 60-plus books he published over the course of his career, six of them will be pulled from publication. In light of that, here are the top 10 times that Dr. Suess was controversial. And the list goes way beyond his books.

10 Theodor Geisel and His First Wife

Dr. Suess, known to his family and friends as Ted, married his first wife Helen Palmer in 1927. Helen was a talented children’s author in her own right, penning highly acclaimed stories, in addition to expanding on Suess’s own work. She would also go on to found Beginner’s Books, a subset of Random House Publishing dedicated to books for young readers. Beginner’s Books became the largest children’s publishing company in America.

You may be wondering how his relationship with someone so talented and powerful in her own right would be controversial. Well—Helen fell ill with Guillain Barre Syndrome and subsequently became paralyzed as a result of her illness. After 13 years of battling various health problems, Palmer died by suicide on October 23, 1967. Just before her death, she left a note detailing how her difficult relationship with Suess was a main contributing factor in her death.

The note detailed how Helen felt surrounded by failure, and how she could not imagine a life without Ted. It went on to describe how Ted could cover up the reasons behind her suicide, even in death protecting the husband she so loved. It is widely believed that Helen had recently discovered her husband’s affair, and it was this betrayal coupled with her illness that would lead to her suicide. While many argue that there’s something to be said for following your heart, betraying your wife certainly sends a message about your character.

While working as a nurse in Massachusetts, Audrey met the Suess. It wasn’t long before she and Ted grew close, fueling rumors about a torrid affair between the two. These rumors were seemingly proved true when in Helen’s suicide note she pointed to their affair as a reason for her deep depression.

Immediately following her friend’s death, Audrey filed for divorce from her then-husband. The two married less than a year after Helen’s death. Not only did Ted’s indiscretion contribute to his first wife’s death, but to the demise of his second wife’s relationship with her children.

Because of his open unwillingness to father children, Audrey sent her daughters to boarding school following her marriage to Ted. So not only was Dr. Suess a terrible husband to his first wife, but his relationship with his second wife caused her to abandon the two most important people in her life. Let’s see him write a rhyme about that.

Many of his later works have racist tones and presentations. But his earliest work was no different. In fact, it was even more troublesome. In his high school years, Ted was known to not only have written and directed but also to have starred in a Minstrel Show — complete with blackface.

A Minstrel Show in name alone may sound like a light-hearted comedy meant to bring joy to families of all kinds. But historically it’s quite the opposite. While comedy was a main feature, the basis for the comedy style was to perpetuate racial stereotypes of the time. Most prominently seen during the mid to late 1800s, it would shockingly persevere as an “art form” in less cultured settings.

7 Cat in the Hat Has a Racist Face

It’s eye-opening to learn exactly where Dr. Suess took inspiration from for his famous illustrations of the Cat, in “The Cat in the Hat.” A minstrel was most often a white man, who painted his face with makeup to mock and degrade the black community. You can see how the white interior of the Cat in the Hat’s face and body, surrounded by the black exterior fur and topped by an exaggerated bow tie and top hat are reminiscent of the costuming of a minstrel actor.

While children today may not be familiar with the minstrel theater, children at the time of original publication would have been. And when viewed side by side with photographs from Minstrel actors in the 19th century, coupled with Suess’s own history with engaging in and promoting Minstrel acts, there are striking similarities. Taking a closer look at the design and shading of many of the figures in his stories, it’s not a far cry to imagine that there might be more of these twisted “Easter Eggs” hiding in his other children’s books.

In 1929, Dr. Suess was an active contributor to “Judge” a successful conservative newspaper of the time. In a particularly shocking illustration, he features white men in what seems to be a department store.

Instead of shopping for everyday household items, these men are looking at nonsensical products that are purposefully designed to make the buyer’s life difficult. This includes a haystack that hides a needle and one man catching gnats to go with a healing salve. As the reader comes to the bottom panel of the illustration, you begin to see how overt the portrayed racism truly is. There’s no hiding it.

The bottom panel features a white man standing in a room full of men in blackface and exaggerated features, loudly proclaiming with a racial slur the men in blackface were up for sale. Not only were the depictions of black citizens truly offensive and harmful even for the time, it promoted the idea that not only were black citizens up for sale to be bought like common objects but that they were also incapable of performing basics tasks and would only serve to inconvenience the buyer.

This cartoon is offensive to the modern eye, clearly showing Suess’s dark attitude towards racial tension in the United States.

It’s true, Dr. Suess attempted to help support the United States through WW II by selling war bonds and by drawing political cartoons. But in many ways, he fell flat.

Perpetuating the notion that Japanese Americans belonged in internment camps was not only counterintuitive but morally objectionable. While he tried to critique the Unites States’ lack of response to the genocide of children in Europe, he racialized his depictions of the Japanese.

In one famous cartoon, Japanese people are seen lining up for miles for the chance to buy bombs, and he insinuates that they’re lying in wait for orders from the Japanese army. In another, you see cats jumping a fence into an internment camp, furthering negative stereotypes about Japanese Americans.

Seuss later took a trip to Japan and saw the aftermath of the Nuclear bomb that was dropped on Hiroshima. The experience supposedly shifted his perspective, later dedicating “Horton Hears a Who” to Mitsugi Nakamura. However many would still question if he truly changed his ways.

One of the books included in the 2021 “cancel” of Dr. Suess’s books is “And To Think I Saw It On Mulberry Street.” The Suess estate decided to pull six books because of the blatant racist depictions through their illustrations. “Mulberry Street” featured an illustration of an Asian man in a pointed cap, slanted lines for eyes, and featured him holding a bowl of rice with chopsticks.

This depiction leaned into and furthered negative stereotypes of the time. When it was announced that his estate was ceasing printing this story, many throughout the country went into an uproar. The sales skyrocketed, causing stores to sell out everywhere and used copies to sell for hundreds of dollars.

3 If Suess Ran the Zoo, It’d Be Hard to Compete

In his 1950 children’s book “If I Ran The Zoo” Suess follows a young boy as he travels the world in an elaborate fantasy about filling his own zoo. It seems relatively harmless for a young boy to daydream about adventures in far-off lands. But the illustrations that accompany the story follow a more sinister line of thought.

The story depicts this young boy traveling to capture increasingly “exotic” creatures, steal them away from their homes and hold them in captivity to be gawked at by strangers. Not only would this concept alone be very supportive of colonization ideology, but the depictions of the people in these lands are also questionable at best.

In one scene, you can see Asian men, again prominently featured with slanted eyes and exaggerated dress, carrying a fanciful creature in a bamboo cage atop their heads. With hands together in a praying position, they almost seem blissful to be carrying the creatures of their homeland off to captivity in another country.

2 The Real Trash in McElligot’s Pool

Apparently the little boy from “And To Think I Saw It On Mulberry Street” didn’t cause enough havoc, he returned for “McElligot’s Pool.” Here the young boy sits by a pond, hopeful of catching a fish. When an adult comes by attempting to crush the boy’s hopes and dreams, telling him the pool is full of trash, he imagines a better outcome.

Again one would not typically assume that a young boy dreaming of a big fish on his line would be controversial in any way, but Dr. Suess is here to prove you wrong.

This time Suess moved past his typical portrayal of black and Japanese Americans. He set his sights a little farther north. Here he illustrates fish in thick fur hooded jackets, purporting that these fish would swim from the north pole down to this pool for the sole purpose of planting itself perfectly to be caught by this young boy’s line. Not only did he yet again portray a native culture in an overdone cartoonish way, relying only on stereotypes of the time, but he referred to this fish as “Eskimo.”

There is some conflict about the origins of this term — some believe it comes from the Ojibwe language, others theorize it is descended from French or perhaps Latin. Regardless of the language it’s derived from, there’s no mistaking that the people who originally used this term were colonizers. It was for these reasons that this book was included in the great cancellation of Dr. Suess 2021.

When the announcement from the Dr. Suess estate came on March 2, 2021 that they would cease printing six of his books, people went nuts. Many groups lashed out for “Perpetuating Cancel Culture,” or the idea of scrapping anything to avoid hurting someone’s feelings, regardless of how harmless it may be. While those in support rallied around the estate’s decision to pull the books, thrilled that children might be “shielded” from potentially offensive material.

In the following weeks, demand for Suess material skyrocketed. The New York Times Best Seller list was topped by Dr. Suess books, although none were the stories that had been removed from publication. Because of the sudden loss of supply, and the sharp uptick in demand, the prices on the canceled books skyrocketed.

For someone whose life was steeped in controversial children’s fiction, it’s no surprise his work continues to breed contention even after his death.