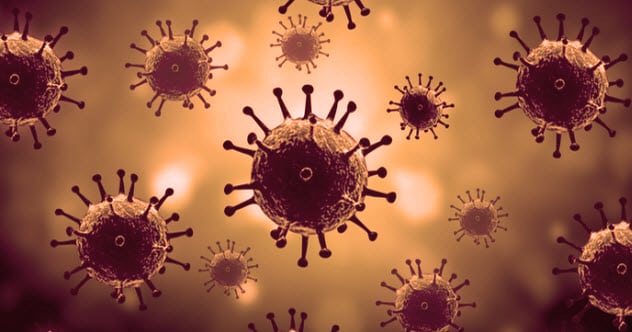 In a world full of extraordinary things viruses might just be the strangest. They are intimately involved in the lives of all organisms but they may not technically be alive themselves. Yet, as the last year has proved, they can have dramatic effects on living things. A single virus can grow exponentially into a world changing event.

Here are ten big facts about these tiny, infectious things.

You might think that the debate on what constitutes life is settled. Generally we know whether something is alive or not just by looking at it but viruses blur the lines. They are made of the things we associate with life: proteins, lipids, and nucleic acids. They even do things we associate with life: they replicate and evolve. But the key fact is that they cannot do it on their own. For a virus to replicate it must infect a host cell and hijack their metabolism. Most scientists think of viruses as non-living assemblies of chemicals that are very good at making copies of themselves.

There are some researchers though that think of viruses as very much alive. They cite the complexity of their genomes and the speed of their evolution. They say that when we picture viruses in their complete form – as little capsules of DNA or RNA – we can imagine they are dead. But only in the same way a bacterial spore is dead when it is inactive. Once a virus enters a cell and begins the complex task of making more copies of itself they think it is perfectly correct to think of them as living organisms.

Whichever side of the debate you take the “life” cycle of a virus is a fascinating one.

9 Viruses may be the origin of life

Evolution is the best way of understanding how life on Earth has changed and developed but many people claim that evolution cannot tell us anything about the origin of life itself. One hypothesis however uses evolution to explain how life as we know it may have come into existence.

In the beginning there was RNA, a molecule closely related to DNA. Crucially though RNA is able to twist and form molecular machinery that can make copies of itself. Once the first RNA molecule that could do this formed it would rapidly proliferate. If mutations developed that made it better at making more copies then it would outcompete other RNA strands. In this way inanimate molecules can evolve.

What are the simplest things that use RNA and DNA to replicate? Viruses. In the Virus World hypothesis it was viruses that came first – and those that could infect cellular organisms are the ones that have survived until today.

8 You are mostly virus

Viruses are everywhere. Wherever there is life there are viruses that are associated with them. While some are very noticeable through their effects on us many are so harmless that we never know they are on us. And there are a lot on us at any one time.

We tend to think of humans as a mass of our tissues and cells – the bits that share our DNA. In the human body there are around 10,000,000,0000,000 cells that are human. This number is tiny however compared to the bacteria that live inside us and on us. There are ten times as many bacterial cells in any human as there are human cells. Then there are the viruses. Each human carries a hundred times more viruses than they do human cells.

While some of these viruses will target human cells many of them want nothing more than to infect the bacteria we share our bodies with.

One of the greatest threats in modern medicine is antibiotic resistance in bacteria. When our antibiotics fail to kill bacterial infections we are pretty much back in the pre-modern age when a simple scrape could lead to your death. Viruses may be our saviours.

Bacteria are prey to viruses just like we are. Phages are viruses that infect bacteria. Once a phage has infected a bacterium it replicates hundreds or thousands of copies of itself and splits the bacterium open, spewing out more viruses to infect more bacteria. If you can find a phage that hunts and kills a dangerous bacterium they you may just have found a solution to antibiotic resistance.

Lots of research is being done on phage therapy, as these treatments are called, and many scientists are excited by the possibility of novel cures for bacterial infections. But the idea of using phages is not entirely new. When a cholera epidemic struck India in 1926 doctors took stool from people who had unexpectedly recovered from cholera and gave it to the sick. Many of those treated by this somewhat gruesome method recovered. Likely the answer lay in phage viruses that targeted the cholera germs. 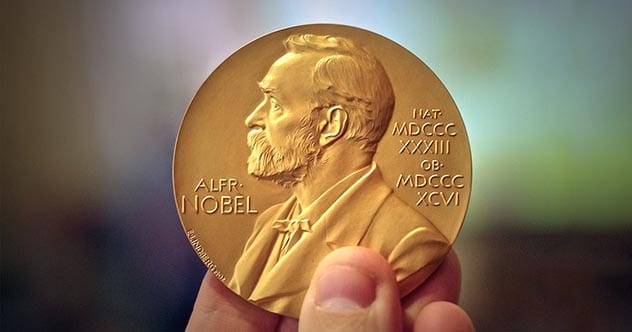 If you want a Nobel Prize then one of the best places for you to start your work might be on a virus. In 2020 researchers were award Nobel Prizes in Medicine for their discovery of the Hepatitis C virus. The awarding of Nobel Prizes for Virology goes back much further however.

Viruses were first discovered in 1892 when Dmitri Ivanovsky found that tobacco plants could be infected by disease when injected with a fluid that had been passed through a filter much too small for any bacteria to pass through. The unseen infectious agent was soon named a virus – from the Latin for poison, or a slimy liquid. Some thought that a virus was a liquid thing but Wendell Stanley managed to isolate the tobacco mosaic virus and purify it into crystals for study, proving viruses were particles. He won the Nobel Prize for his work in 1946.

Since then viral research has won the Nobel Prize dozens of times for either curing a viral infection, such as the creation of the Yellow Fever vaccine, or working out how viruses like papillomavirus causes cervical cancer. 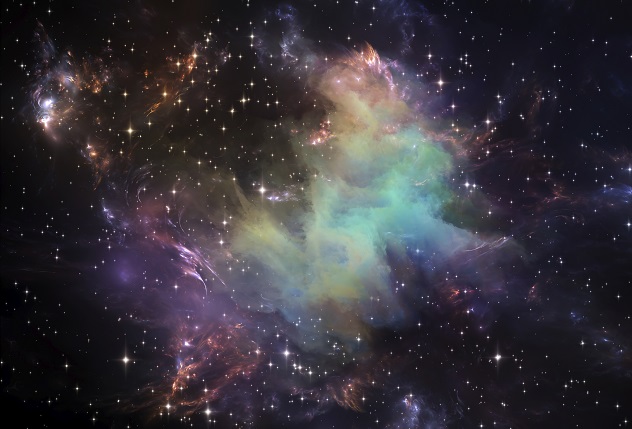 It is impossible to count the number of virus particles on Earth at any one time. By the time you counted them they would have multiplied and been destroyed many times over. Scientists can however make a good estimate. These range from 10 to the power 30 to 10 to the power 32, so many would say there are around 10 to the power 31 on Earth. That is 1 with 31 zeroes after it. To put it in perspective there are a mere 10 to the power 21 stars in the observable universe.

All of these are on the planet yet we can’t see them. This makes it clear just how small viruses actually are. So what would happen if you took some very fine tweezers and lay all these viruses end to end? A good average size of a virus is around 125 nanometres – billionths of a metre. So divide the number of viruses by their average size to find out how far our chain of viruses would stretch.

The answer is that our viral chain would be 800 million light years long. This would pass well beyond the nearest galaxy, and passed the neighbouring clusters of galaxies.

We’ve seen that viruses can be small, but just how small can they go? That depends on their nucleic acids. A virus is, basically put, just a fancy shell around some DNA or RNA. The shell helps the DNA or RNA get into a host cell and the nucleic acids force the host cell to make more shells so the virus can spread. How many genes can that take?

For the Circoviruses that infect pigs all they require are three genes. The entire length of their genome is just 1726 base pairs long, compared to a human’s genome of over 3 billion base pairs. With just three genes the virus is able to invade a cell and replicate. With such a short genome it only needs a small coat to house it. The circoviruses are only 17 billionths of a metre across.

Some researchers are trying to get even smaller. One group has announced they made an artificial virus from bits of protein and DNA that is 12 billions of a metre long. It is hoped that more artificial viruses may have a role in advanced medical treatments.

Not all viruses are content to stay tiny however. Some of them can get pretty big – if you consider bacteria large. When researchers went looking for bacteria in a cooling tower they collected what they thought were bacteria but they could not identify them. It was only much later that they were discovered to be an entirely new type of giant virus. They called it a Mimivirus as it was a MIcrobe-MImicking virus. Its genome is over 12 million base pairs long and the virus is larger than the smallest bacteria.

Since then other giant viruses have been discovered, some of them in unlikely places. In 2014 the largest ever virus was discovered in the frozen tundra of Russia. The samples it was found in were over 30,000 years old. Then they did the obvious thing and tried to reanimate them.

The scientists exposed amoebae to the defrosted viruses as they know other giant viruses infect these single-celled organisms. Despite being from the Stone Age the viruses successfully invaded the cells and replicated. The ability of viruses to remain active after so long has led to some speculation that melting permafrost may release long-forgotten human pathogens.

Mamavirus is another giant virus that was discovered in a cooling tower, infecting amoebae, but what most excited scientists was the discovery of another virus associated with it. This much smaller virus targets mamavirus and preys on it like a parasite. Because of this researchers named it Sputnik and the other viruses that attack viruses are known as satellite viruses.

Sputnik is not able to infect an amoeba on its own and reproduce. It can only replicate in amoebae that have already been infected by a mamavirus. Instead of directly hijacking the cell’s own machinery Sputnik uses the virus’ replication proteins to make copies of itself.

Not even viruses are immune to the insidious and ingenious methods of viral invasion.

1 You are part virus

Humans all carry viruses of some type or other inside us – but we also have viruses trapped within our genome. Some viruses are not content to simply replicate in our cells. Some use molecular machines to cut our DNA and insert their own into it. If they do this in a sperm or egg then their DNA can be passed down the generations. Over millions of years this has happened so often that around 8% of any person’s entire genome is made of these viruses that have become fossilised inside us.

The viruses in genomes can even be used to track evolution. If two species have evidence of the same virus infecting them then it can be a clue that the common ancestor of both was infected before they evolved into separate species.

Once the viruses become stuck in our genome however genome and passed on they can have big effects on evolution. The viruses mostly become inactivated and reshuffled across the genome and sometimes this mixing can be advantageous. Some human genes use the promoter regions of viral DNA to be activated. Some have even been co-opted into the human immune response system – a case of viruses fighting viruses.