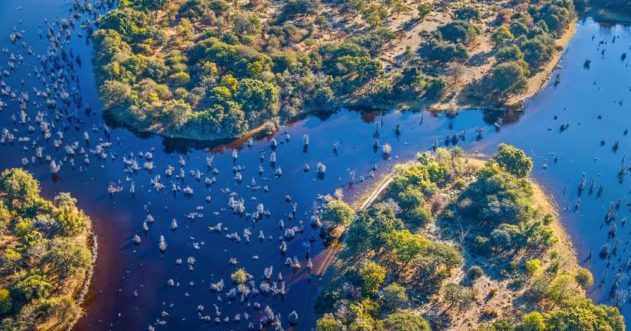 Africa is a beautiful place. Here you will find wildlife, sunsets and raging thunderstorms like nowhere else on Earth. The continent is home to breathtaking beaches, magnificent mountains, shimmering deserts and spectacular waterfalls. Africa is the source of the Nile River, which is the longest river in the world and flows through 11 countries. Dinosaurs roamed the landscapes here and complex geography shaped the continent into what it is today. On this list are just some of the images that capture the sheer beauty of Africa, the place more than 1.2 billion people call home. 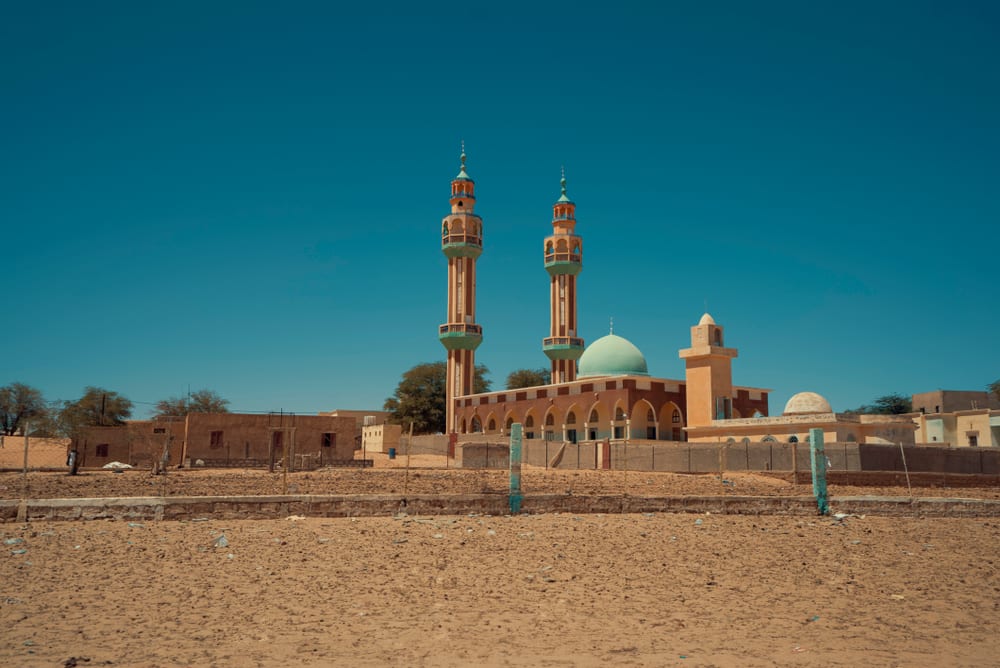 Amid a 11th-century caravansary in Ouadane, Mauritania, stands the stunningly well-preserved Ouadane Mosque. It is believed that Quadane became a prominent city during the 11th century and was part of the trading and religious ‘hub’ along one of the main trans-Saharan routes. The mosque itself was built during the 15th century as the population and town expanded.

The walls that surround it suggest that ‘Old Ouadane’ was a fortified village. It is thought that the mosque was abandoned during the 19th century as some of its walls still have clay plaster clinging to it.

Ouadane is also the closest town to the Richat Structure, another beautiful landmark otherwise known as the Eye of the Sahara, which is so large that it is visible from space. 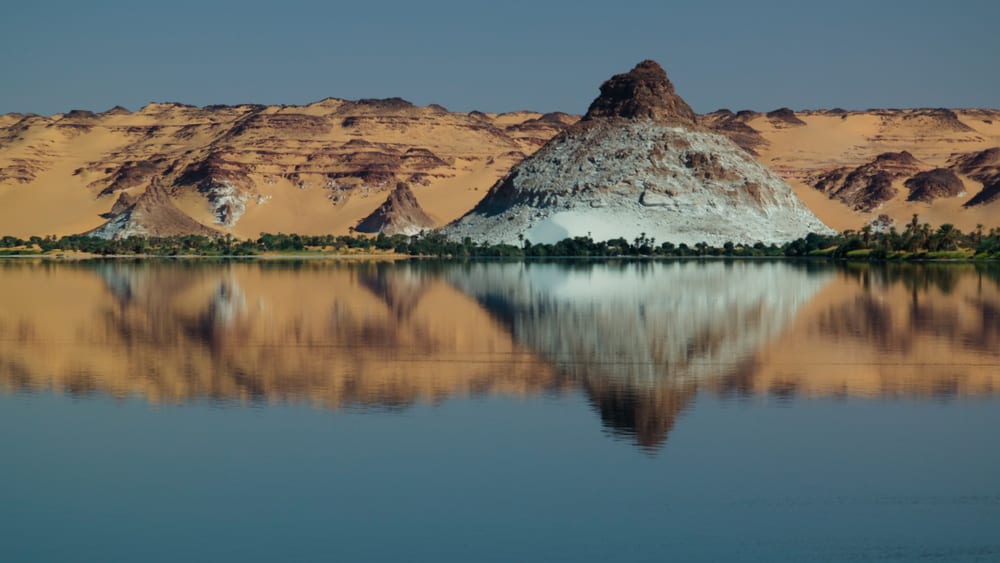 Chad, as they say, is not for the faint-of-heart. Ongoing conflict has made the region a no-go zone several times and it is one of the poorest countries in the world.

However, Chad is also home to some of the most stunning natural landscapes on Earth. These include the Lakes of Ounianga which are found in the Sahara desert. These lakes are the only Unesco World Heritage site in the country and are said to receive only 2mm of rainfall each year. They are supplied by underground fossil water and some of the 18 lakes are salty while others are fresh. 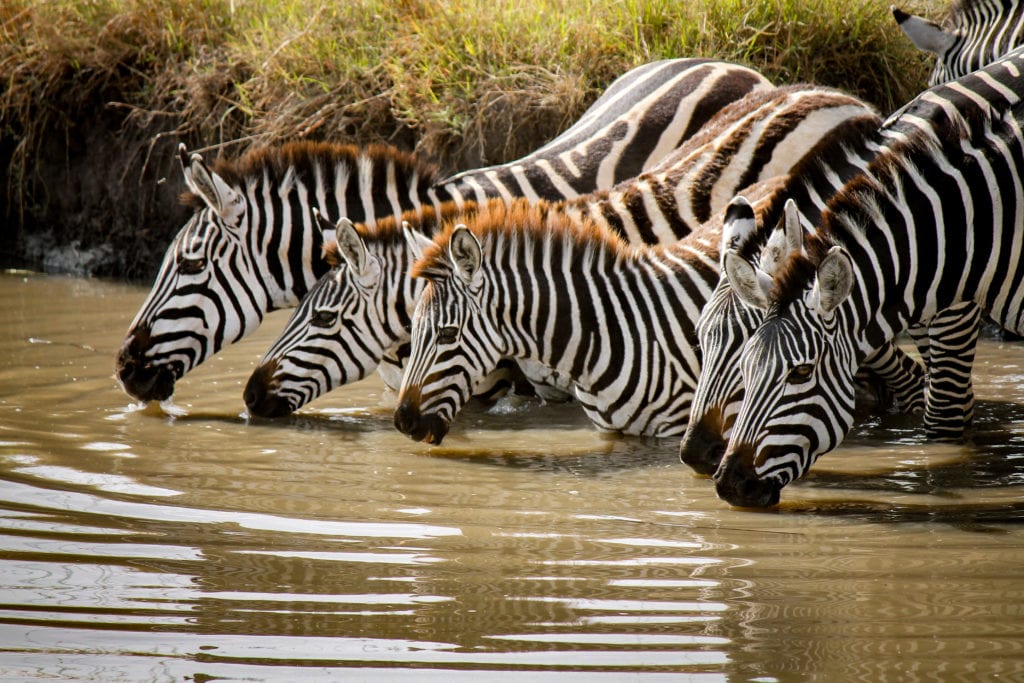 If wildlife is what you want to experience, then Kenya is the safari destination for you. At the Masaai Mara National Reserve you will find the ‘Big 5’ as well as wildebeest, zebras, giraffe, hippos and crocodiles over an area of 583 square miles. Rare species are also found here, including black leopards, white giraffes and ‘polka-dotted’ zebras.

This national reserve is one of the world’s most famous wildlife conservation areas and is also the destination of the largest animal migration, namely the Great Wildebeest Migration. During the annual migration over two million animals including wildebeest, zebras and antelope migrate from the Serengeti National Park in Tanzania to Maasai Mara. As they cross the Mara River they have to fight off several crocodiles submerged in the water.

The reserve was established in 1961 as a wildlife sanctuary and was turned into a game reserve in 1994. It is situated along the Great Rift Valley in Southwest Kenya, which is also a great tourist attraction in the country with its ancient lakes and volcanic mountains.

7 For the love of nature 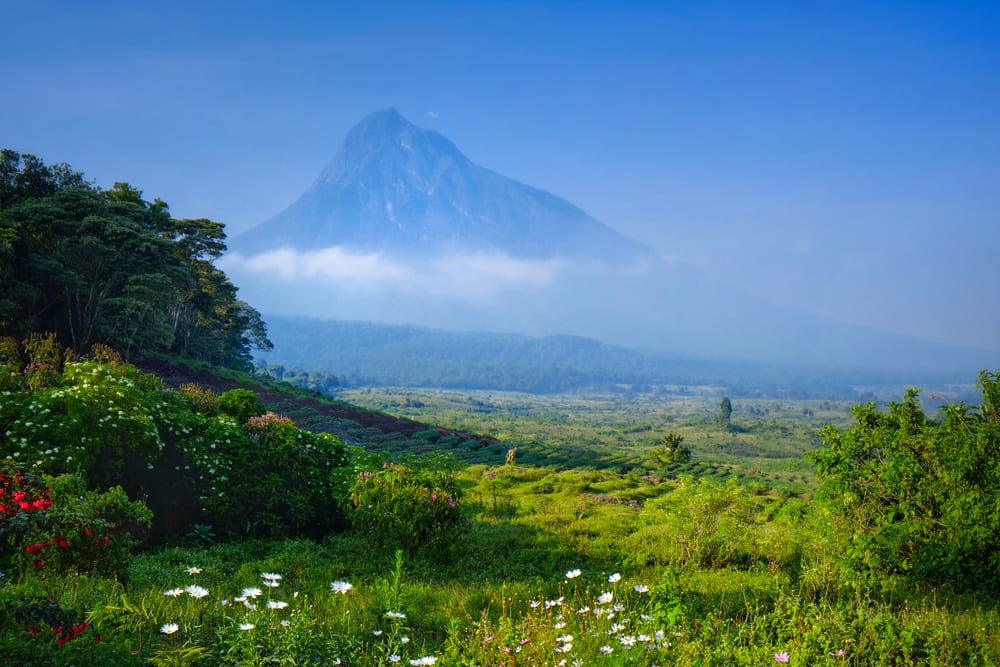 The Virunga National Park in eastern Democratic Republic of Congo is home to 1/3 of the world’s endangered mountain gorillas. The park was established almost a century ago to ensure the protection of these gorillas of which there are only 1,000 left today. The park is also the location of active volcanoes, rainforests and mountains.

Around 800 rangers are employed to protect the national park, especially the gorillas and elephants, and this has been described as one of the toughest jobs in the world. In a country ravaged by civil war, these rangers put their lives on the line to protect the animals and in the past 12 months alone, more than 20 rangers and park staff have been murdered by rebels. The most recent attack was in January 2021 in which 6 rangers were murdered.

The park rangers remain staunchly dedicated to taking care of the gorillas and other animals however, choosing to stay even amid constant threat from outside forces. They live near the gorillas, and spend their days feeding them and playing with them, especially the orphaned gorillas as they need constant care. 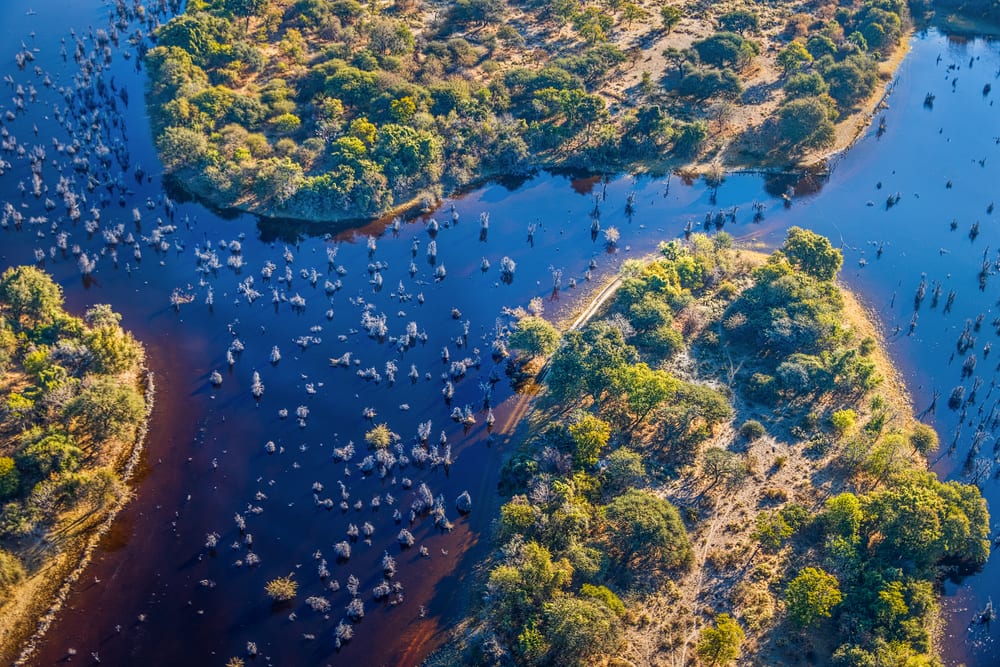 There is no doubt that the Okavango Delta is one of the most popular tourist attractions in Botswana. But there is a lot more to this landlocked African country than just the world’s largest inland delta. Here you will find the Kalahari Desert, the largest salt pans in the world, Baines baobab trees and huge sand dunes.

One of the most unique and stunning places in Botswana is Kubu Island. The island is made up of dry granite rock and is surrounding by a ‘sea’ of white salt from the Makgadikgadi Pan. Artifacts dating to the Stone Age have been found here and experts believe that the island may have been used for ancient rain-making ceremonies. It is estimated to be 2.7 billion years old and is considered sacred by locals.

5 Lazy day at the river 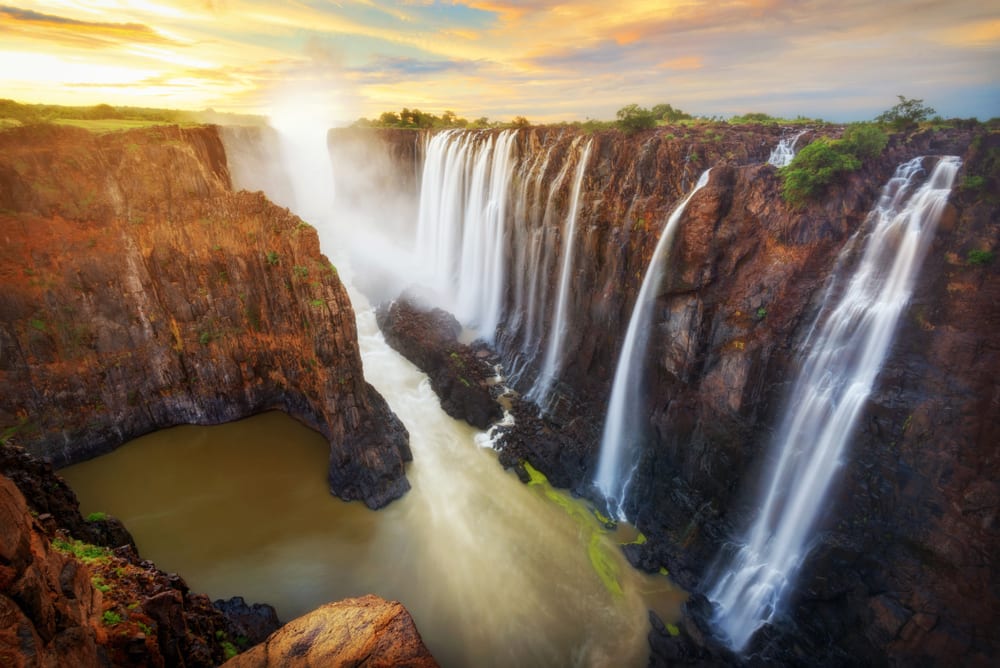 Zambia is well known for the ‘Smoke that Thunders’ or as most people know it, the Victoria Falls. The country was named after the fourth biggest river in Africa, the Zambezi, and is also home to the world’s biggest man-made lake, Lake Kariba. The lake is used for commercial fishing and to supply electric hydropower to both Zambia and Zimbabwe.

The Victoria Falls are situated on the Zambezi River, which is home to a large number of river hippopotamus. Going on a river cruise will almost guarantee you an encounter with a ‘yawning’ hippo or two in the water. Or maybe you will spot dozing at the water’s edge just like the one in the picture. 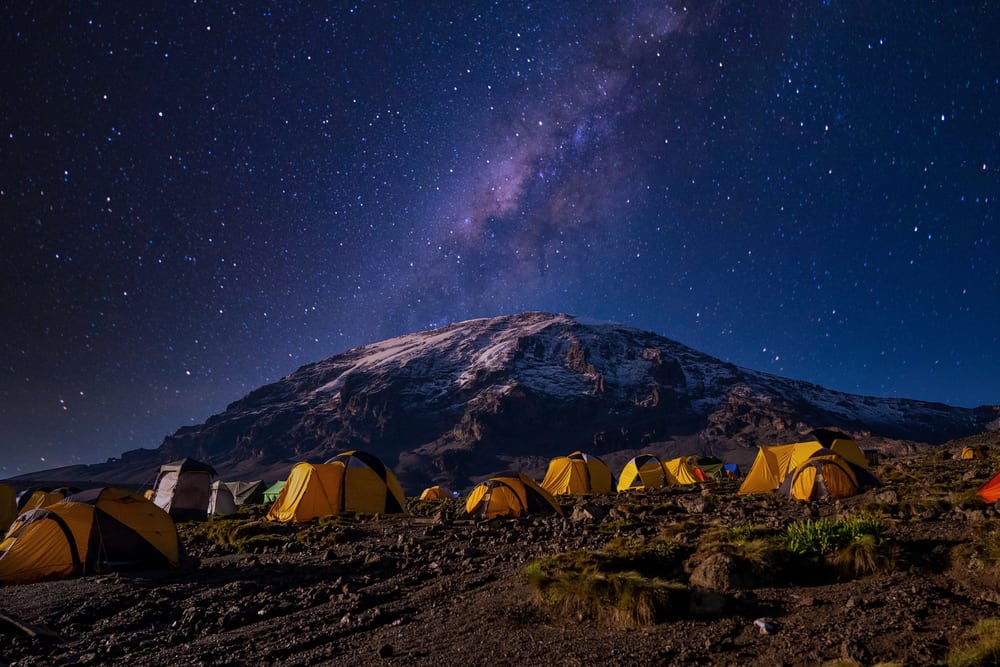 In Zanzibar, Tanzania, the beaches are white and sandy, the ocean blue, and traditional boats float lazily in the shallow waves. Wildlife roams the several national parks in the country, including the Serengeti. Tanzania is home to many natural attractions including Mount Kilimanjaro which is the highest peak in Africa.

The mountain was formed over a million years ago by volcanic movement along the Great Rift Valley and its three volcanic cones formed around 750,000 years ago. Its slopes consist of rainforest and alpine meadow teeming with buffaloes, elephants, leopards, monkeys and an abundance of birdlife. Just about every type of ecological system can be found on Kilimanjaro including heath, alpine desert, an artic summit and cultivated land. 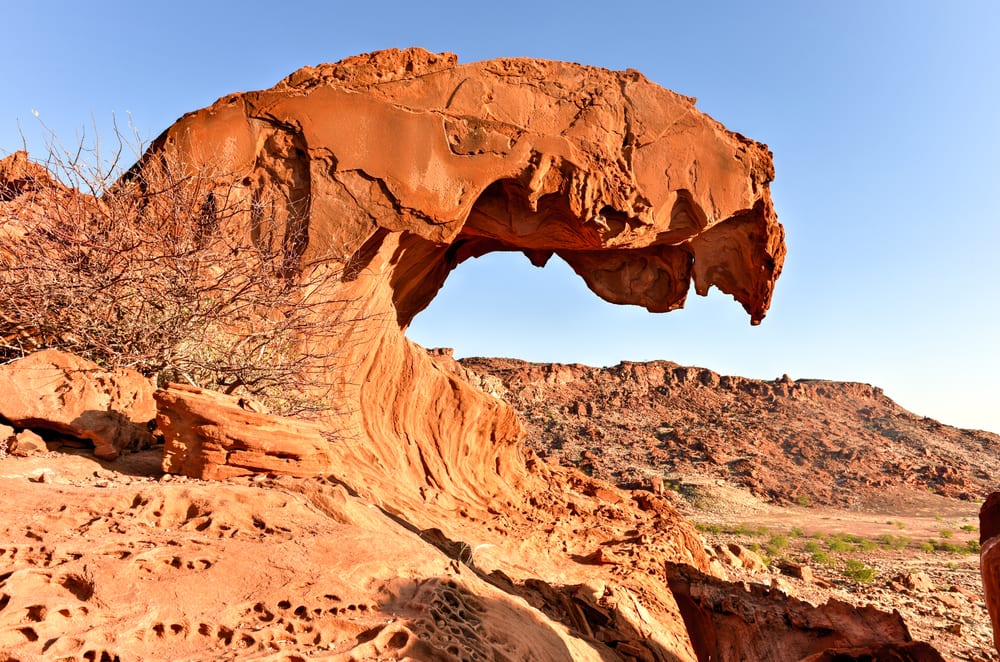 Twyfelfontein loosely translates to ‘doubtful fountain’ and is the site of one of the largest rock art concentrations in Africa. The site is located in the Kunene Region of north-western Namibia and has been inhabited for around 6,000 years. Hunter-gatherers were the first to call Twyfelfontein home and later Khoikhoi herders lived here as well. UNESCO declared the rock petroglyphs a World Heritage Site in 2007.

The engravings on the red-rock boulders of Twyfelfontein are estimated to be around 6,000 years old and experts believe they were created by San medicine people or shamans. Some of the most popular rock engravings include a giraffe, a lion-man with a hand protruding from the end of its tail and a kudu dancing a jig. There is even an engraving of a seal, which is considered to be truly remarkable as the closest ocean to the site is 100 km away. 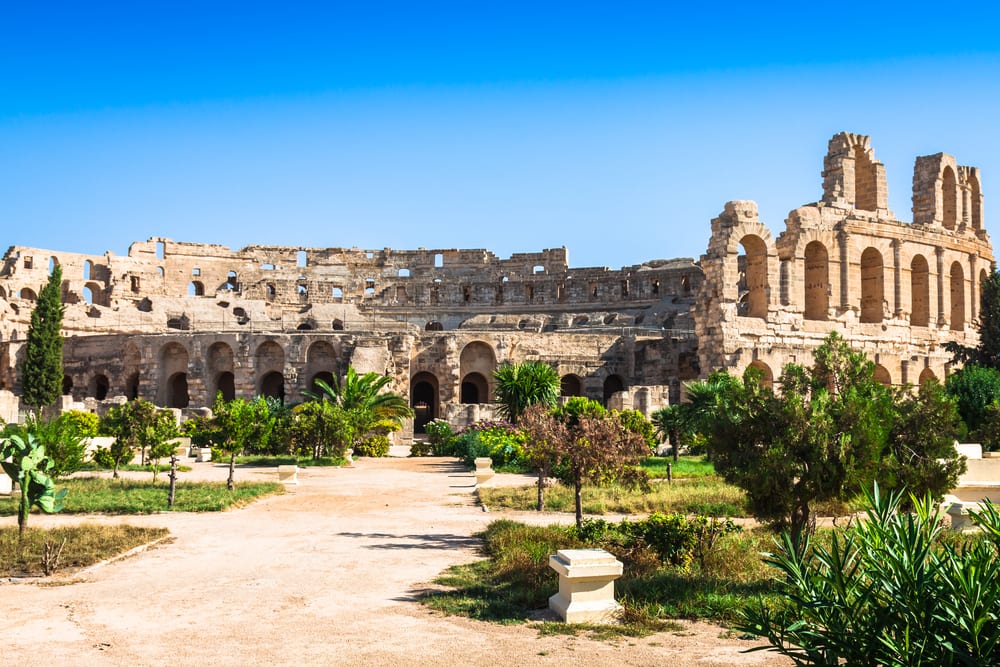 In El Jem, Tunisia, known in Roman times as Thysdrus, stands the remains of a massive 35,000-seater amphitheatre believed to be the third largest ever build. The amphitheatre was built by the Romans around 238 AD and bears a strong resemblance to Rome’s Colosseum.

Underneath the structure’s arena, is an intact basement which was discovered by archaeologists in 1904. The basement is 65m long and divided into two vaulted galleries. Inside the galleries are cells and rooms in which the wild animals and gladiators were housed before they stepped into the arena to take part in the violent fights and public spectacles the Romans loved.

The El Jem amphitheatre is one of the most visited attractions in Tunisia and is protected as a UNESCO Heritage site.

1 The splendor of the Lowveld 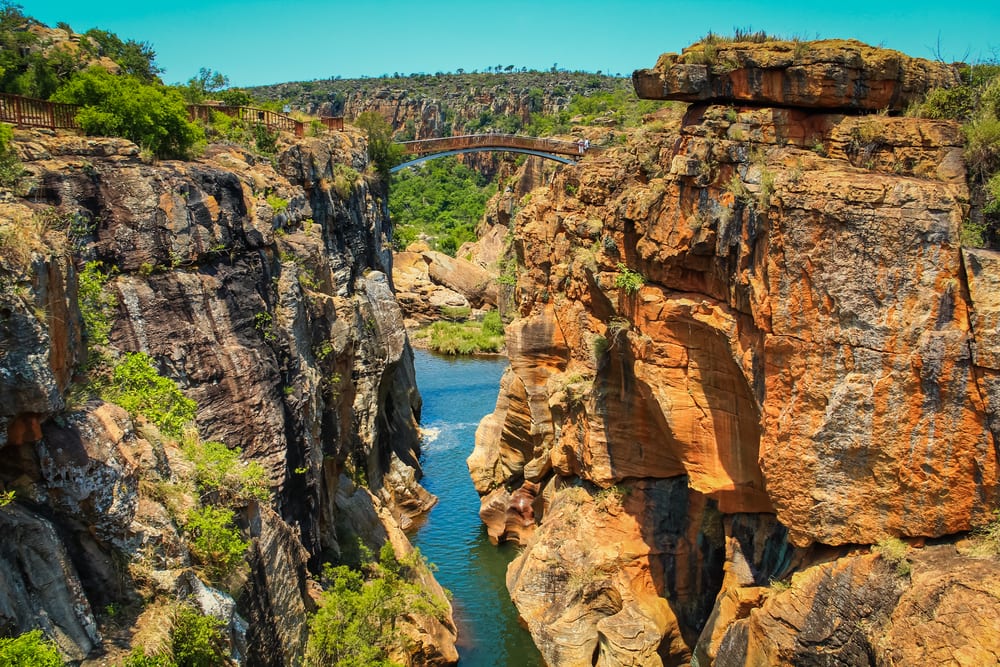 And then of course, there is South Africa. Home to Table Mountain, Robben Island, the Namaqualand Flower Route, the Garden Route, Valley of a Thousand Hills, the Drakensberg mountain range and a whole lot more.

In the Mpumalanga province lies the Blyde River Canyon, recently renamed the Motlatse River Canyon. The canyon is the third largest on Earth and is characterized by several stunning rock formations and vantage points including ‘Three Rondavels’, ‘God’s Window’, Pinnacle Rock and Bourke’s Luck Potholes. These are all part of the scenic Panorama Route which starts at the Long Tom Pass outside Lydenburg and ends at the border of the Mpumalanga and Limpopo provinces.