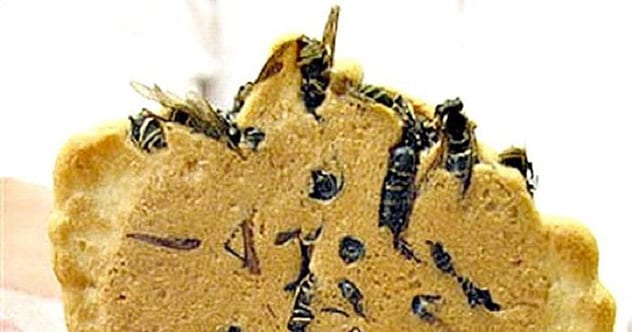 Most of us consume animal products on a daily or near-daily basis, meat, fish, dairy, and eggs making a large part of most non-vegan diets, alongside delicious honey, or perhaps even the more exotic choices of caviar and shellfish.

While many would actually describe these ingredients as strange as well when thought of in an in-depth sense, they’re nothing compared to some more obscure ways people use animals as food, be it strange but coveted delicacies or traditional dishes and ingredients, the items on this list far outweigh any of our typical indulgences in strangeness.

Snail caviar or Caviar d’escargot is a delicacy that’s steadily rising in popularity, coming all the way from what’s typically known as a land of wonderful cuisine, France.

While the enthusiasts who eat them regularly swear by their deliciousness, eating large, pearly snail eggs is certainly not what most would describe as a pleasant dinner, but fans of the ingredient seem to go out of their way to consume it as often as possible, though, unfortunately for them, probably not too often, as a kilogram of daviar d’escargot could cost as much as a staggering £1,500.

Caviar d’escargot is seeing use in various increasingly complex dishes, or as an apparently simple treat on warm toast.

Casu marzu is an already quite disturbing looking type of cheese that’s made and popular in certain parts of Italy, mainly the island of Sardinia, though illegal in many others. It’s a fermented, basically rotten cheese that uses maggots, the larvae of cheese flies, to turn the delicacy into something absolutely appetite-ending for many, a cheese filled with liquid and live maggots still inside as people consume it.

The cheese is said to be very soft, and its name quite literally means “rotten cheese” when translated to English, with the larvae introduced for the sole purpose of creating this delicacy.

Aside from the incredibly offputting.. everything, there are numerous safety concerns that leave it outlawed in many areas, though, in Sardinia, it’s still consumed as a traditional wedding dish.

A type of chutney, which is a fairly tame start but it quickly gets much stranger, this type of is a delicacy that first emerged from an Indian tribe, and it’s made, quite horrifically, by grinding up dried red ants and their eggs into a paste.

The chutney is said to have a hot, sharp, powerful taste that’s loved by the locals and gourmets, plus it’s believed to have medical properties, though these claims are unresearched and doubtful.
The ant paste is mixed with various herbs, spices, aromatics, sugar, and vegetables before it’s to be served and hopefully enjoyed.

Tacos are, perhaps needless to say, an incredibly popular and beloved dish, but, unfortunately for most, this variation puts a twist on them that’s not entirely conventional, nor is it particularly enjoyable to a typical palate.

Tacos de ojo are made using corn tortillas as a base, filled with lime, red chile sauce, pico de gallo, avocado, and the star of the dish, cubed cow eyes.

While it is safely edible, it doesn’t exactly sound appetising to most, however, the truth is that animal eyes as food are a relatively widespread ingredient in certain parts of the world, tacos de ojo only being one of many, though perhaps the most notable one.

Those who have tried it describe the consistency as “gelatinous and juicy”.

Japan, while known as one of the most culinarily renowned countries on the planet, with many high quality restaurants, famous and delicious dishes, and a focus on fresh, often healthy, savoury ingredients, there’s a lot to love about their food, as we’re about to learn, however, they’re no stranger to odd and off-putting delicacies and traditional dishes.

Eating insects alone is already too much for most people, but this dish, or perhaps snack, takes it even further. Hachinoko, simply put, are a bunch of bee or wasp larvae served crunchy and prepared using a sweet marinade. They’re supposed to be very nutritious and are apparently a traditional and shockingly popular snack food of choice while consuming alcohol.

Described as having a nutty flavour by themselves, there are some modern efforts to make honeybee larvae a staple food in developing countries and all around the world as a whole due to their apparently great benefits and nutritional value, which would certainly be a wonderful thing, even if it’s somewhat intimidating at first.

Some do it out of necessity, others to be adventurous with food, eating arachnids is certainly something most of us would refuse to try, especially considering the extreme fear many people tend to exhibit when it comes to these animals.

The most popular arachnids to eat, by far, are tarantulas and large scorpions, a fairly reasonable choice, considering their relative size and amount of meat, but probably still an incredibly off-putting one to most. These animals are typically seasoned and fried, with a large chunk of their consumption happening in less economically stable parts of the world, though their consumption has recently gained relatively popularity in the west as a ‘challenge’ of sorts, or simply a strange but daring culinary experience.

Many who have been daring enough to try actually describe the experience as enjoyable, comparing, for instance, tarantula legs to more conventional meats, but the bitter and acidic taste of arachnid organs are best avoided by most.

Another traditional Japanese food, and not the last one on this list coming from there, Shiokara is another traditional dish that’s widely known in Japan as “chinmi”, meaning “rare taste”, it’s a nutritional meal with a very useful history, considering it stood for centuries as a cheap source of protein and various nutrients, but today, it’s certainly not quite as well regarded.

As for what it is, well, shiokara is, quite simply, bits of fish or seafood fermented in their own salty viscera paste. It’s most commonly eaten with rice, and the main ingredient could be anything from salmon to squid. While certainly unappetising sounding, it’s still found in pubs to be served with sake, and some enjoy the salty, fishy quality quite a bit.

This is one that many here may have already heard of, fried brain sandwich used to be considered a US Midwest staple, though it’s clearly fallen out of favour with the younger generations, though it’s still served in certain establishments.

The description is extremely simple, already evident from the name, it’s a piece of or perhaps entire animal brain breaded and deep fried, then made into a sandwich, possibly served with toppings or eaten plain, a few decades ago it was very well known in certain states, but now it’s merely something most people would find gross, though, if one’s already eating animal meat, it’s perhaps best to use all parts possible.

Another one more people may at least be familiar with, eating blood in some form or another has been a part of many traditional cuisines for centuries if not thousands of years. Most people, when they think of it, imagine something like the British blood pudding or similarly sausage-like applications, but that’s not all there is to it.

Many cultures eat blood differently, but it’s certainly becoming less and less popular everywhere. With a strong taste and hit of the iron contained largely in red blood cells, it’s incredibly divisive with more and more people leaning towards having a negative opinion of blood as a whole. Taken from multiple animals, used as a thickener for sauces, cooked into gelatinous cubes, a stew, or even consumed raw, consuming animal blood is part of our history nearly no matter where we live, though the taste and recent potential safety concerns are an obstacle to it reaching popularity again.

Another Japanese delicacy or “rare taste” to close things off, it’s unfortunately another one where the name really describes it quite well. Not a traditional food this time but a more recent trend localised to a smaller part of Japan, this type of rice cracker, or jibachi senbei in Japanese, has gained plenty of online notoriety when it went somewhat viral some years back.

The simple description really does hold true, jibachi senbei are rice crackers, ranging in size, though the viral example is certainly terrifyingly large for what it is, dotted with many whole wasps one could almost mistake as chocolate chips, if one looks at them from very, very far away perhaps. The most interesting part of this food item is possibly that it seems that it’s most popular with the Japanese elderly, retirement homes putting out a staggering amount of orders for these rice crackers, the wasps for which are apparently collected from the wild, which is claimed to enhance and provide their freshest taste.

10 Weirdest Street Foods In The World

About The Author: Just a curious person with a passion for all things science, history, mysteries, the paranormal, animals, and strange cultural phenomena!