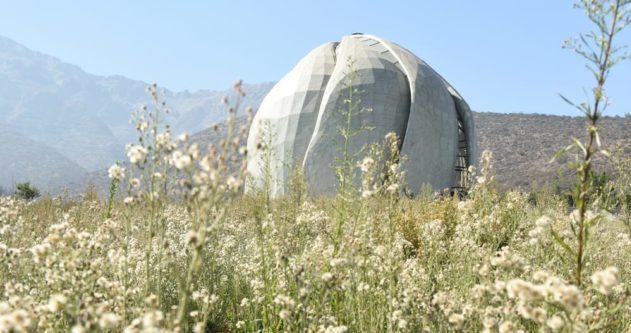 Ancient structures and design will always be admired and it will remain huge tourist attractions, but there is also something to be said for modern architecture. Architects and builders around the world have in recent years come up with striking ideas that translated into mind-blowingly stunning buildings. On this list are just a few of these types of modern buildings that inspire Pinterest boards and Instagram stories worldwide. 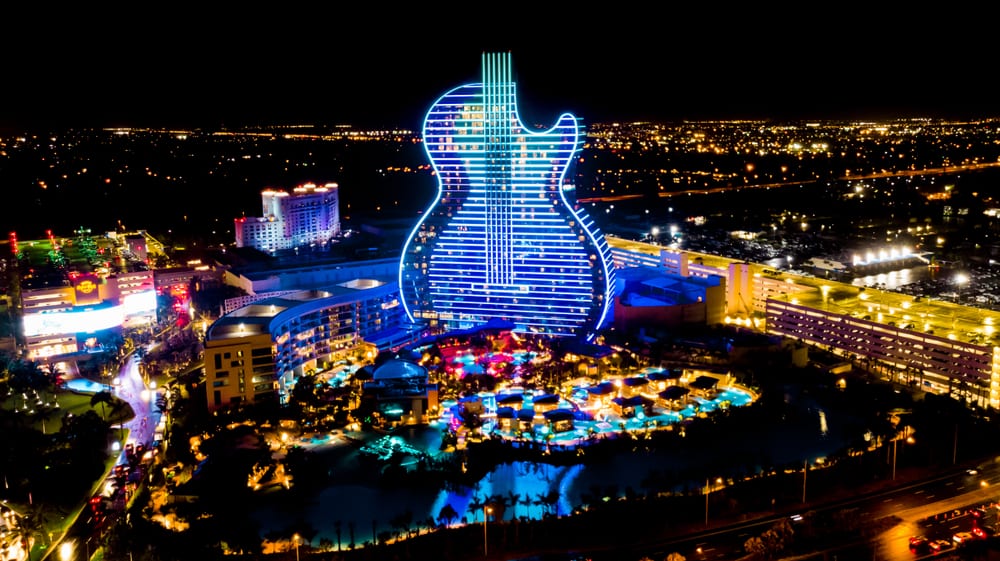 In 2019, the Seminole Hard Rock Hotel & Casino opened in Hollywood, Florida in the form of an enormous guitar-shaped building. It took close to a decade to complete the design and construction and the building also features a light show when night falls. Guests who stay at this 638-room hotel enjoy breath-taking views all round of the Hollywood beachfront and the venue includes a massive performance venue as well as pool resort area. The project was part of a $1.5 billion expansion and is 34 stories high. A series of apartments forming a huge arch and allowing for a covered square featuring a market hall during the day and a food court of popular restaurants at night, is what the hybrid Markthal building in Rotterdam is all about.

The daily market includes 96 stalls that sells fresh food and other items and it is overseen by an 11,000 square meter mural that covers the vaulted interior. The mural includes images of food, flowers and insects. To highlight the colorful interior, the external façade is covered in grey stone.

The ends of the arch provide protection during bad weather with the help of single-glazed cable net façade which is the largest of its kind in Europe. 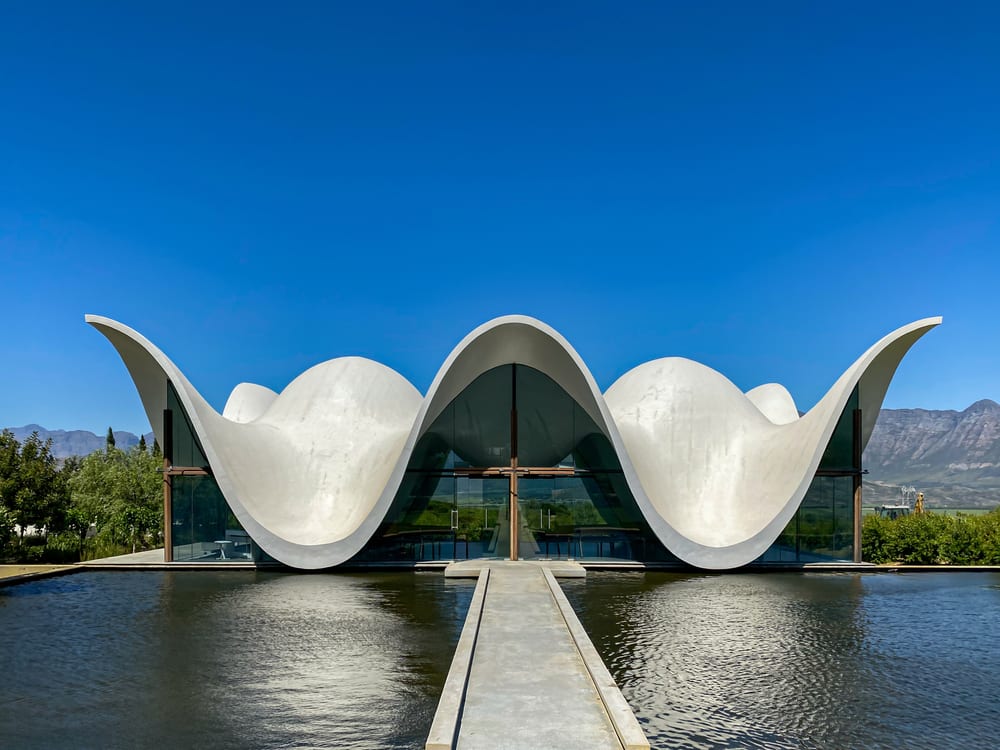 Creating a striking image in front of a range of majestic mountains, is the beautiful Bosjes Chapel in Wellington in the Western Cape Winelands of South Africa. The building includes dramatic lifts and dips in its roof, almost touching the surface of the large pool that surrounds it and features cross-shaped frames and a golden pulpit.

The wing-like appearance of the chapel was inspired by the seventh verse of Psalm 36 which says: “How priceless is your unfailing love, O God! People take refuge in the shadow of your wings.”

From a distance, the chapel almost seems to hover or float above the surface of the water and as one draws near to it, its serene atmosphere envelops the senses. The Santiago Bahá’í Temple opened its doors in 2016 and is accessible to people from all faiths. It took six years to complete construction and this house of worship is ringed by nine entrances, comprises of nine pathways and nine fountains and takes on the shape of a ‘flower’ with nine petals or arching ‘sails’. Inspiration for it’s unique look was taken from Sufi whirling dancers, Japanese bamboo baskets and shattered glass. Its interior is covered in translucent marble and its cast-glass paneled exterior absorbs and reflects the beautiful colours of sunrise and sunset.

The stunning temple is 30 metres in height and within three years of its opening had received more than 1.4 million visitors. Chhatrapati Shivaji Maharaj International Airport, also known as Sahar International Airport is the second busiest in India and won the award for Best Airport in India in 2016. It is named after the 17-century Maratha Emperor, Chhatrapati Shivaji and is considered to be one of the best places in the world for shopping, (apart from flying, that is.)

The long-span roof of the terminal building is one of the largest on Earth and is supported by 30 steel columns. The terminal also holds the longest and biggest cable wall system in the world. Furthermore, the coffered panel design was inspired by the shape of a peacock’s eye, which is the national bird of India. Each of the coffered panels contain a round aperture with a laminated lens that is able to produce two colors when light falls on it. Therefore, when the light strikes these panels just right, the entire airport resembles a palace constructed with colored glass. 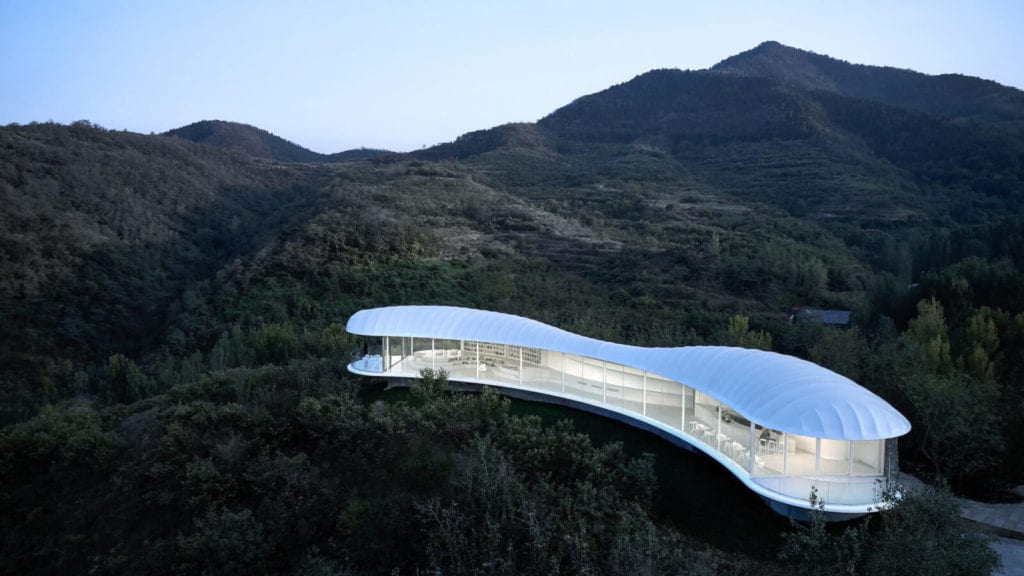 The Jiunvfeng Study is an eye-catching visitor centre located on the side of Mount Tai, which is considered to be the most famous sacred mountain in China.

The idea behind the design of the centre was to create a “floating cloud hovering in the mountains.’ The elongated building provides panoramic views over both the mountain as well as Shenlong Grand Canyon and includes a coffee shop for those who want to sit a while and take in the scenery.

The cloud-inspiration is taken even further at night when LED lighting strips built into the double-layer membrane of the canopy, lights up and makes the entire building look a cloud with a halo.

Its entire form was built to correspond to the topography of Mount Tai, blurring the lines between architecture and the natural surroundings.

4 City of Arts and Sciences Valencia is home to the modern scientific and cultural complex, City of Arts and Sciences, which is the largest complex of its kind in Europe. It includes the massive Oceanografic building inside of which you will find the biggest aquarium in Europe. The aquarium contains 500 species of ocean life including sharks, dolphins, penguins and sea lions.

The complex also holds the Prince Felipe Museum of Sciences building and the “eye of the city” which is an audio-visual building that comprises of a planetarium as well as an IMAX cinema. Visitors to the City of Arts and Sciences can also enjoy theatre, opera and dance shows at the onsite opera venue, Palau de les Arts.

The most recent additions to the sprawling structure are a blue building called the Agora and the Umbracle which is an open-air space. The Lotus Temple in Delhi is the oldest building on this list, having been dedicated in 1986. Much the same as the Santiago Bahá’í Temple, the Lotus Temple allows all faiths inside its walls and the lotus design is meant to embody the message of tolerance that Bahá’í teaches.

It has been called the Taj Mahal of the 20th century and is a huge tourist attraction. The architect of this gorgeous building, Fariborz Sahba, won several awards for the design of the Lotus Temple and before Covid-19 was visited by around 10,000 people every day.

The temple comprises of nine sides formed by 27 marble petals. The marble was imported from the Penteli Mountain in Greece. There are several domes which allows for the white walls to be illuminated as natural light shines through, creating a serene ambiance. On the sides of the buildings, vegetation flourishes with at least 35,000 plants decorating the exterior, and the sky garden is a big selling feature for the penthouses at the top. Below the sky garden is a unique, cantilevered heliostat system that reflects light onto the vertical walls shaded by the shadow of the bigger tower. The heliostat system also doubles as a lighting installation that resembles silent fireworks. In 2019, the collective efforts of architect and builder brought to the life The Wave, a residential project on the Vejle Fjord in Denmark.

As the name suggests, the building was constructed to look like five waves running along the waterfront and it makes for a magnificent landmark. The structure holds 100 apartments topped with double-height penthouses at the top of each tower.

The wave-shaped structure is reflected in the ocean water during the day and at night it is illuminated to look like mountains. The building was designed with the idea that it would ‘change’ along with the time of day.

Years before the project was completed, it was awarded the Residential Building of the Year award in 2009 and it is hoped that this amazing building will bring more tourists to the waterfront.