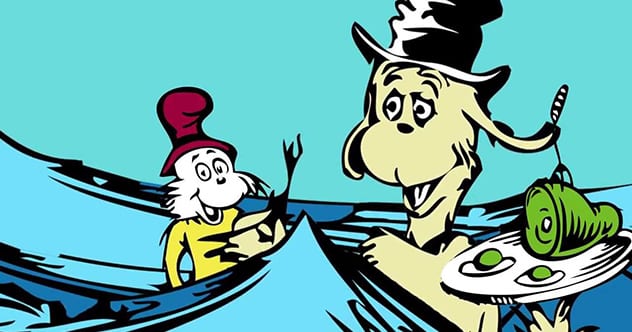 Children today live in a world chock-full of hidden agendas, from direct misinformation to subliminal indoctrination. Whether it’s TV commercials telling kids they ought to be bribed into eating vegetables, or popular video game companies trying to drag children into their own corporate lawsuits, there have definitely been easier times to be a parent. Without much in the way of critical thinking skills, kids make easy prey for any company, politician, or even a children’s book author with a narrative to push.

We know to be wary of corporations and politicians, but we’d really like to think that authors would keep their own spiritual and political beliefs out of their offerings when it comes to children. Well, authors are people too and often weave their personal viewpoints into the stories they tell. For anyone who has a child in their life, it’s definitely worth knowing what lies between the lines. Here are ten children’s books with hidden agendas, be it cases of hidden messaging or surprising origins.

10 Horton Hears a Who

We start with a remarkably popular children’s book that has been openly accused of having a rather adult and not so hidden anti-abortion agenda. If you engaged with social media or happen to have had in-laws when the movie came out, you probably already find it difficult to separate the internal images of that empathetic activist elephant with the rallying cries of, “A person’s a person, no matter how small!”. It does seem to fit nicely into the “Pro-life” narrative. . . Right up until you consider that the author himself, known to be leftward leaning, never publicly expressed support for the theory and, in fact, is rumored to have threatened to sue aggressive activists who hijacked his tale for claiming it supported their cause.

Although such a lawsuit was never filed, and no ulterior intent was ever disclosed, the good doctor’s widow and biographer have publicly stated that Horton was actually taking up the cause of oppressed minorities who were in danger of being ignored into extinction by their more numerous neighbors.

As one of the most popular children’s books for decades, there’s a good chance you have as happy memories as I do of cuddling up on our mother’s lap reading “The Rainbow Fish.” The illustrations were captivating, the story so heartwarming and inspirational. I remember feeling virtuous and content just having followed along. So how could there be a secondary agenda tucked behind that one last resplendent scale? Well, he’s giving away something of himself to make those friends.

Anyone who’s dealt with a bully knows that giving away a part of yourself in hopes of being liked is not sustainable or healthy. It teaches a message to kids that buying friends is the way to happiness. The message that kids ought to sacrifice the unique aspects of themselves to please others or “fit in”, sets up a destructive pattern of asymmetric relationships. After all, it wasn’t until he refused a demand to hand over his body parts that the rest of the fish ostracized him. Suppose the octopus was truly a wise advisor.

In that case, he’d teach the Rainbow Fish healthy relationships based on reciprocal giving and that what makes us unique should not be sacrificed to look like everyone else. Unfortunately, the agenda that the book advances is much more one of valuing uniformity no matter the cost, instead of being true to ourselves.

8 Percy Jackson and the Lightning Thief

Rick Riordan gave us an entertaining overview of ancient Greek mythology as a present-day alternate reality. Although his tale stands on its own as a coming-of-age story, his protagonist, a 12-year-old with a significant learning disability, delivers an added dimension as a surrogate for his own son’s struggles with dyslexia.

Since Rick’s son, Haley, struggled with reading, Rick would tell him stories to keep him engaged and learning. Haley especially enjoyed the stories of ancient Greece and kept asking his dad for more. So Rick developed the main character of Percy, a boy whose brain was hardwired to read in Ancient Greek, to provide a relatable and inspiring hero for kids with learning disabilities. Thus was Percy Jackson was born, and the rest was (Ancient Greek) history.

One of Roald Dahl’s lesser-known books extols children to beware of a pair of dirty, ugly, nasty characters named the Twits. You may think this story is a classic lesson on the importance of hygiene, good manners, or stranger danger. But Mr. Dahl himself fueled speculation that his unstated purpose behind the tale was to imbue the younger generation with a sense of disgust for facial hair.

The beloved children’s writer made it very clear he felt beards were dirty, disgusting, “hairy smokescreens behind which to hide.” His book, “The Twits,” would explain in great detail all the foul-smelling and retched detritus hanging in Mr. Twit’s beard hair, such as moldy cornflakes and “maggoty green cheese.”

To quote the author, “The whole business is disgusting. I have always felt that unless a man has a sound medical reason for doing so, then the cultivation of a beard is nothing more than a studied and reprehensible act of vanity. A man is not meant to look beautiful. He should not even be thinking about his face. He should accept it as it is and should peer into the mirror only once a day when shaving.”

6 Wind in the Willows

“The Wind in the Willows” follows woodland animal friends Ratty, Toad, Badger, and Mole on several adventures through the English countryside. These adventures make for great bedtime reading and even inspired Mr. Toad’s Wild Ride attraction in Disneyland. But some argue there is more to the text than a fanciful take of well-dressed creatures picnicking. Rather, Grahame could have been attempted to desensitize kids to homosexuality and possibly even drug use. According to Professor Peter Hunt, there’s evidence that Grahame himself was gay, despite having a son with his wife, Elspeth. Certain portions of the text could also be perceived as suggestive.

You would be hard-pressed to find a parent (or babysitter) who is not familiar with the literary lullaby of “Good Night Moon.” Yet even this innocuous bedtime story hides an unannounced agenda. Not a subversive indoctrination this time. Rather a deliberate use of established hypnosis techniques has proven to be more powerfully soporific than anything that even the most recalcitrant youngster can resist.

Margret Wise Brown designed her delightful book after in-depth research into the early language learning of young children. Her genius is not so much in the familiar, evocative, simple words themselves but in the interweaving of rhythm, rhyme, and repetition. Perhaps even more importantly, the deliberate cadence of assonance makes it almost impossible to read these words in anything other than calm and soothing hushed tones, entrancing the reader along with the child listening.

4 The Adventures of Pinocchio

You probably know the story of Pinocchio through Disney—the marionette whose nose grew to ridiculous lengths whenever he uttered a lie. But this was not a book haphazardly written to illustrate the pitfalls of indiscriminate lying. Woven throughout the text is a narrative rich in Judeo-Christian values: story on the life, death, and transformation of the puppet-boy into a new man, with the help of a manifested conscience named Jiminy Cricket (JC, as in Jesus Christ).

Carlo Collodi wrote the story to advance the idea that individuals can undergo transformational change through self-examination and hard pursuit. The character-arc traced by Pinocchio heavily relates to the idea of the manifestation of the transcendent. The theme of free will vs. enslavement in his adventures has deep roots in biblical texts.

“Pinocchio” is a story of a boy constantly tempted to claim the identity of the victim and abandon responsibility. But “Adventures of Pinocchio” also puts forth the idea that by choosing to look hard at yourself in the places where you least want to look, you also have the potential to transform into a completely new kind of being.

While “The Giving Tree” is predominantly considered a children’s book, it also has an active fan base among adults. Well-meaning admirers tend to share the book as if it were an ideal template for undying selfless love. Even after being reduced to a stump fit only for sitting, the tree, who sacrificed nearly all for the young boy, was content. Really?

What seems like an innocent book about the joys of giving introduces kids to an extremely twisted view on love and unrestricted self-sacrifice. Intentional or not, the author pushes a worldview where self-destruction is the ideal form of love. But as any relationship expert may tell you, this kind of boundless irresponsible behavior leads to the feeding of narcissism, asymmetric dynamics, and mutual unhappiness in the real world. In essence, the tree acts as a compulsive enabler. She may mean well, but ultimately the tree induces the worst aspects from the boy and creates unrealistic expectations of what the giver can healthily contribute.

2 The Chronicles of Narnia

A casual reader may not catch the deeper meaning underlying the fables set in Narnia, a magical realm where talking animals roam and where Kings and Queens reign. The true ruler of the realm is Aslan, a wise and noble lion with fantastical power. Aslan represents more than just a lion; C.S. Lewis wrote him as an allegory to Christ. Lewis, who converted to Christianity in 1931, wanted to engage the younger generation with biblical concepts in a more palatable form.

The books progress through time around the protagonists, English children Peter, Susan, Edward, and Lucy. We see Aslan’s mentoring of the children, his death at the hands of the White Witch, his victorious reemergence after death, his seeming disappearance, his slow fade into myth and superstition, and his final return in the last book of the series, “the Last Battle.”

Lewis’s story of Aslan the Lion bears more than just a slight resemblance to Jesus Christ, even following in his footsteps. “The Chronicles of Narnia” sold over 100 million copies. They’ve even been made into several full-length, live-action films since the author’s death in 1963.

Fun fact: “Green Eggs and Ham” was the direct product of a bet between colleagues.

In 1955, the book “Why Johnny Can’t Read: And What You Can Do About It” by Rudolf Flesch spotlights the problem of childhood reading. Publishers such as William Spaulding of Houghton Mifflin were looking for a solution, so Spaulding tasked Dr. Seuss with the problem: “Write me a story the first-graders can’t put down.” Random House published The Cat and the Hat in 1957. Dr. Seuss’s smash hit was not only notable for its charming story, but he crafted the 65-page tale using only 236 words.

But Spaulding wasn’t Dr. Suess’s only publisher. Bennett Cerf was also quite impressed. As the co-founder of Random House, Cerf was the de-facto editor to Dr. Suess. Cerf wagered that Dr. Suess could not write a meaningful book with 50 unique words or fewer. The result? In 1960, Suess published “Green Eggs and Ham” through Random House.

Seuss won the bet with exactly 50 unique words and managed to create a remarkably popular, though a bit repetitious, book in the process. According to Publisher’s Weekly, “Green Eggs and Ham” was the fourth highest-selling children’s book ever written (with “The Cat and the Hat” in the #9 spot).