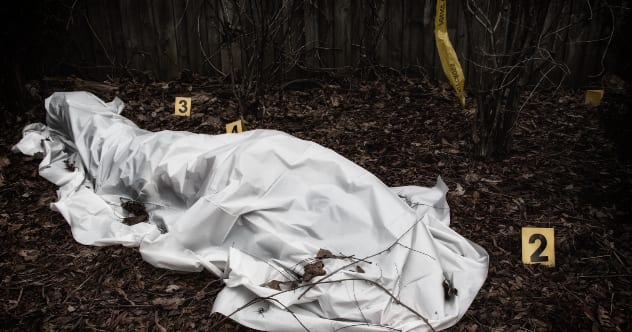 We’re a good way into this whole ‘human’ experiment now, and the first phase—the age of explorers—is wrapping up. We have mapped every swath of land to some level of detail and we are prying away at the secrets of ancient civilizations. The untouched wilderness is becoming more and more touched, by more and more people, turning wilderness into landmarks.

As more people flock to these landmarks each year, it becomes increasingly obvious the difference between settling a region and taming it. Sometimes the land fights back and people die. Sometimes the people just fight each other and people die. Either way, after 300,000 years of settlement, there are many dead humans in a lot of really cool places. Here are ten of those landmarks, places of either natural or manmade wonder, and in either case- an abundance of corpses.

What do you do when you run one of the world’s biggest metropolises, and you realize that you’ve accrued 2,000 years worth of bodies within your borders with nowhere to put them? We’ve all been there. And so has the French government.

By the 1700s, Paris was two millennia old, and some 6,000,000 people had lived and died within its borders. Its cemeteries were overflowing and to make more room, skeletons were being exhumed and stacked in cemetery walls. The (literal) tipping point came when sections of wall around Paris’s biggest cemetery Les Innocents collapsed, sending bones and bodies spilling into Paris streets.

The solution: empty tunnels and quarries beneath the city. Six million bodies were placed in these tunnels, and now their bones line the walls in neat stacks or in some places, ornate sculptures. It is a magnificent and ghastly display of death, and about one mile of it is open for public exploration. The rest has been ruled unsafe and is off-limits, but a quick YouTube search will show how many cavers and ghost-hunters ignore that restriction.

The ancient Roman city of Pompeii was a wealthy community. Rich Roman men frequented its fine bathhouses and brothels, artists filled the city with grand statues and frescoes, and its (seemingly) idyllic location between Italy’s Tyrrhenian Sea and Mount Vesuvius made it a trade hub and tourist destination. That all changed in the Fall of AD 79 when Vesuvius revealed itself to be an active volcano and erupted for two days straight. It began with 18 hours of pumice rain—clouds of rock dust spewed out by the volcano that blanketed Pompeii and the surrounding region in a dark, choking haze. Luckily, this stage was relatively slow and visible and allowed most of the city’s 20,000 inhabitants to flee to safety.

For the 1,200 who remained in the city for whatever reason, a series of quick ejections of hot ash sealed their fate. What’s most interesting is that many of them left spaces in the ash that allowed archaeologists to create casts of their bodies. These revealed the citizens’ final locations and positions, and so we know, for example, which people huddled together in the end, which tried to run from the city, and which—in at least one case—just sat in a tavern, having one final drink.

The fact that “Suicides at the Golden Gate Bridge” is its own Wikipedia article speaks volumes. San Francisco’s iconic bay-spanning bridge is famous for attracting jumpers. It’s been called a suicide magnet, the world’s #1 suicide destination, and the world’s deadliest bridge. And its reputation comes mainly from officially documented cases. Official jumper statistics grossly underrepresent the actual amount of attempted suicides because, in its 80+ year existence, many people are believed to have jumped without any witnesses.

Untold thousands have died from leaping off the bridge, either from the impact of landing, inability to swim to shore, and/or hypothermia from the bay’s frigid waters. Perhaps the spookiest detail of the whole phenomenon is that, since many jumpers did so in secret, from time to time unknown bodies in various states of decomposition wash ashore around the San Francisco Bay and neighboring areas. The grim discoveries are frequent, and the bridge has gained an almost sinister reputation alongside its touristic appeal.

Alright, let’s keep going and get these unfortunate jumpers out of the way all at once. Niagara Falls is a truly awesome natural wonder and attracts thousands of people to its majestic rushing waters. Most are sightseers, naturalists, or parts of destination weddings, but two other groups visit the falls, and they both have little chance of ever returning.

The first is suicidal. Estimates as to the number of people who have sought death by jumping over the falls vary wildly, but most are around 4,000 in the last century.

The other group that makes steady pilgrimages to the falls to meet their end are the daredevils. Traveling down the falls, with or without a barrel, is one of the most daring feats in the world. Unfortunately, roughly a quarter of those who try the stunt perish in the attempt. About 20-30 people die going over the falls each year in one of these two ways, making Niagara Falls a grim eastern bookend to the continental U.S. alongside the west coast’s Golden Gate Bridge.

North Yungas Road is a 69 km road that winds its way through Bolivia, snaking around cliffs and through jungles. Its width varies dramatically, and lanes are dubious and ever-changing. Due to inclement local weather, its placement alongside sheer peaks and gorges, and its unreliable composition, the road is often beset by heavy rains, thick fog, sudden waterfalls, mudslides, and tumbling rocks.

Most estimates claim that 200-300 people die on the road every year, most likely from falling off its side. The road’s history and reputation earned it the title of “Death Road.” Such dubious acclaim brought thrill-seekers, most attempting to bike its treacherous length, which only added to its death toll. Happily, much of the road has been modernized in the last few years, hopefully turning Death Road into Just-Bored-to-Death Road.

Mount Everest is the world’s highest mountain and possibly its most famous natural landmark. This has made it the… well, the Mount Everest of mountaineering. It’s no secret that many have perished attempting to reach its peak (or any base partway up). Over 300 climbers and guides have died en route to some level of the mountain. What is more notable- and more grisly- is the current fate of all those bodies. Several expeditions have been mounted to remove corpses from parts of the trail, but these have been hindered because:

In addition, in recent years, climate change has melted previously perennial snow cover, revealing lost bodies and further filling the trail with death, even between expeditions. Even more ghoulish, the more well-known bodies are now landmarks themselves; it’s not uncommon for climbers to plan their progress by reaching one of their dead precursors at a certain time. Further reading: Green Boots’ Cave.

Every mountain is inevitably in Everest’s shadow—many of them literally. But in terms of human death, Mont Blanc stands far, far taller than its Himalayan sibling. Compared to Mont Blanc’s casualty toll, which is now estimated to be around 10,000, Everest’s 300 seem like child’s play. So why is Everest so notorious worldwide and not Mont Blanc? There are many reasons, but perhaps most ironically, because Blanc is easier. No one sets out for Everest without preparing—hopefully enough.

But Mont Blanc, one of the Alps and shared between France and Italy, is seen as more of a tourist destination than an existential challenge. A pleasant gondola ride carries would-be climbers the first 9,000 feet of the mountain’s 20,000 foot total. The rest is billed as just a “long walk” to the summit. This attracts some 25,000 hikers each year, and- on pure statistic inevitably alone- makes Mont Blanc the world’s deadliest mountain. Corpses are discovered there… frequently.

Yes, Herxheim sounds like a realm Thor would visit, and really, we can’t say for sure he didn’t. If he did, even his mighty thunder-ness might feel a chill run up his spine. Herxheim is a roughly 7,000-year-old archaeological site discovered in Southwestern Germany in 1996. And yes- corpses were found, this time in a series of mass graves. Estimates from bones and bone fragments place the number of dead at Herxheim to be over 1,000. However, the ‘how many’ is less unusual than the ‘why.’

But there is evidence to suggest a number of disturbing answers. The site was occupied by early humans for hundreds of years. The deliberate shape and pattern of the gravesites suggest that the mass graves were planned out in advance and slowly carved out over decades. This, combined with the fact that bones come from all across Central Europe, suggests that the site was a necropolis of sorts, a place for the dying to make one last pilgrimage before burial. But the city is more sinister than restful. Hundreds of skulls were split neatly in half, tongues removed from their necks, and long bones broken in half and their marrow scooped out, suggesting a truly massive cannibalistic enterprise.

A place that practically defines the word ‘infamy’, Aokigahara is a forest in the shadow of Mt. Fuji, Japan, that has come to be widely known as the Suicide Forest. Entering the forest, visitors are greeted with a sign reading roughly, “Quietly think once more about your parents, siblings or children. Please don’t suffer alone, and first, reach out.” The sign exists for good reason.

The forest has taken on an almost mythical reputation as a domain of ghosts, an evil wood with sinister intent, and most notably- one of the most popular places in the world to commit suicide. No exact tally of suicides within the forest exists for the same reason many choose to end their lives there- inside, one is exceptionally isolated and alone. Police have estimated hundreds of suicides within the forest on any given year, but the exact total will never be known.

St. Bartholomew’s Church in Kudowa, Poland bears the very metal nickname Skull Church. From the outside, it looks unassuming; its relatively small, muted visage makes it seem like any other old little chapel in Europe. But inside, it is far from unassuming. No, you’re forced to assume a lot of things when you see what it contains. Its floor, walls, and ceiling are either covered by or partially made up of thousands of human skeletons. There are few surfaces in the whole building that aren’t completely covered by human bone. The 3,000 skeletons that line its surfaces are stacked neatly in places and elsewhere arranged into ornate sculptures and patterns. The cherry on this sundae of death is that the basement also holds bones of its own. Another 21,000 humans’ worth. I guess that’s more the whole sundae than the cherry.