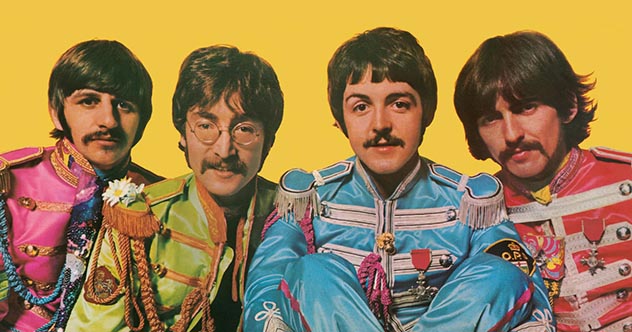 Rock ‘n’ roll makes the world go ‘round. Rock music has its own ‘personality’ and fans see it as the superior genre. It is also no secret that rock ‘n’ roll has influenced society in a way no other genre of music has. On this list are just some of the many rock songs that shook the world at one point in history.

“Helter Skelter” is regarded as a key influence in the development of heavy metal music. Paul McCartney found the inspiration for the song in a published interview with Pete Townshend from the Who and wanted “Helter Skelter” to be the loudest, most raucous song The Beatles had ever released.

The song was released in November 1968 and quickly became very popular. It wasn’t an easy road however, as it took 18 takes of around 5 minutes each to complete the recording. It has since been covered by a number of bands including Aerosmith, Mötley Crüe, U2 and Oasis.

And while the seemingly innocent lyrics were about a playground slide as a metaphor for the rise and fall of an empire, mass murderer Charles Manson interpreted them very differently. To him, they incited murder and an inevitable race war. During his trial he stated “I hear what it relates. It says rise. It says kill. Why blame it on me? I didn’t write the music.”

9 “I Believe in a Thing Called Love” – The Darkness

In September 2003, “I Believe in a Thing Called Love” by The Darkness peaked at number 2 on the UK Singles chart. It was an instant hit and was eventually named 47th of the 101 Greatest Guitar Tracks in 2005. The song ranked number one on a list of ‘Greatest Rock Songs of the Noughties’ and according to a 2020 poll the song was ranked ‘The Greatest Song of the Century.’

The catchy tune was covered by many different artists including Panic! At the Disco, Hanson and Delta Goodrem and featured in several commercials. Sadly, the band saw a rapid decline in popularity, and disbanded in 2006 when frontman Justin Hawkins entered rehab.

In 2011, the original four members of The Darkness reunited and by 2012 they had returned to the UK charts with a new album titled “Hot Cakes”. A few months later they opened for Lady Gaga on her Born This Way Tour. To date they are still playing shows and touring the world.

8 “House of the Rising Sun” – The Animals

The Animals’ 1964 version of this traditional folk-rock song was the most successful version and hit number one on the UK Singles Chart. Distinctive vocalist, Eric Burdon, revealed during an interview that he’d heard the song sung by Johnny Handle and that the band had chosen to record it because of its ‘different’ sound. They started closing out their set with the song during their joint tour with Chuck Berry and was amazed at the overwhelming reaction from the audiences.
It is said that Bob Dylan was inspired to ‘go electric’ after hearing the Animal’s version of the song over the radio.

The legendary first seven notes of “Seven Nation Army” have made the song a hit with football fans. The song wasn’t an immediate hit when released by rock duo The White Stripes, but it took a mere six months for the tune to become a staple of football matches. Its extreme popularity in football stadiums is credited to Belgian team Club Brugge, who sang the riffs of the song after celebrating their victory against AC Milan in 2006.

Eventually “Seven Nation Army” was named one of the best songs of the 2000s and greatly contributed to the popularity of The White Stripes.

6 “American Woman” – The Guess Who

During their most successful streak, Canadian rock band The Guess Who released a total of eleven studio albums. The most well-known of the lot is their 1970 American Woman album which quickly reached number one on the charts in Canada.

The song “American Woman” stayed at the top of the charts for three weeks and also performed very well in other parts of the world. There have been a lot of speculation surrounding the song’s lyrics, with some believing it was an attack on US politics and others seeing the lyrics as being exceptionally chauvinistic. When the band were invited to play at the White House in 1970, Pat Nixon made it clear that the song should not form part of the playlist.

Guitarist, Randy Bachman, said during an interview in 2014 that “American Woman” was an anti-war protest song and expressed the band’s feelings regarding the Vietnam War.

Twisted Sister was originally known as Silver Star and shook up their member list quite a few times before settling on the line-up that most fans knew and loved. The heavy metal band disbanded in 1988 after their latest attempt at an album was a complete failure and fans started criticizing the pop sound of it.

Twisted Sister reunited in 1997 and recorded new albums, headlined benefit concerts and played several festivals. In March 2015, the band’s drummer A.J. Pero died in his sleep while they were on tour. A month later the band announced their final tour which included tribute shows in honor of Pero. Their final concert was played in November 2016.

Even though the band no longer performs, they will always be fondly remembered for their stand-out hit, “We’re Not Gonna Take It.” The inspiration for the song came from glam rock band, Slade, as well as the popular Christmas carol, “O Come, All Ye Faithful.”

The song was also used as the theme song for Donald Trump’s presidential campaign with reports saying that songwriter, Dee Snider, had given Trump permission to do so. He later retracted the permission and asked the presidential candidate to refrain from using the song during rallies.

Def Leppard are one of those bands parents warned their teenagers against. The band’s very famous song “Love Bites” was thought to contain subliminal satanic messages. There were rumors of posters featuring the band, catching fire for no reason or rolling up by itself.

Despite all these rumors, Def Leppard was and remains one of the most beloved rock bands in the world. Their signature song “Pour Some Sugar on Me”, inspired by Aerosmith and Run-DMC’s “Walk This Way”, was part of their Hysteria album which sold 3 million copies in 1988 alone.

Lead vocalist, Joe Elliott, and producer Mutt Lange, used microcassette players and ‘sang noises’ into it after which they swapped the players and tried to translate each other’s noises. This ultimately led to the writing of the hit song as we know it today.

The Who is still considered one of the best and most influential rock bands of the 20th century. The band sold over 100 million albums and they are credited with the development of rock opera, the use of the synthesizer as well as the Marshall stack.

They are well known for songs like “Substitute”, “I Can See for Miles”, and “Pinball Wizard.”

Their highest-charting single in the UK, “My Generation”, includes a vocal stutter and became a massive hit. It has been inducted into the Grammy Hall of Fame and was also the center of a strange rumor that said the lyrics were inspired by the Queen Mother who had guitarist Pete Townshend’s Packard Hearse towed away from his house.

Townshend refuted this saying that the song was in fact about drawing a line between people who lived through WWII and people who were born at the end of it.

Pink Floyd has been referred to as a band for the ages and remains extremely popular to this day. They were the force behind The Dark Side of the Moon and The Wall, among others, and are cited as the greatest progressive rock band of all time.

The band’s backstory includes very dark moments, including lead singer Syd Barrett’s mental health decline which forced him to retire from the band in 1968. These moments made their way into many of the songs recorded by Pink Floyd, sadness palpable in the lyrics.

In 1980, the band released what would become a monster hit: “Comfortably Numb.” The song is regarded as one of Pink Floyd’s best and many fans have stated that David Gilmour’s guitar solo is the best ever. Roger Waters who wrote the lyrics, said that he was inspired to write them by remembering how he felt as a child whenever he was sick with a fever.

In 1981, Queen and David Bowie collaborated on one of the most unforgettable songs in music history. Freddy Mercury and Bowie decided that while recording improvisations, they each shouldn’t hear what the other had sung, which gave the song its unique construction. The name of the song was originally going to be “People on the Streets” but Bowie insisted that it be called “Under Pressure.” He also insisted on being present when the record was mixed.

The result of the collaboration at Mountain Studios in Switzerland was a song that remains a timeless classic, and exceptionally popular.