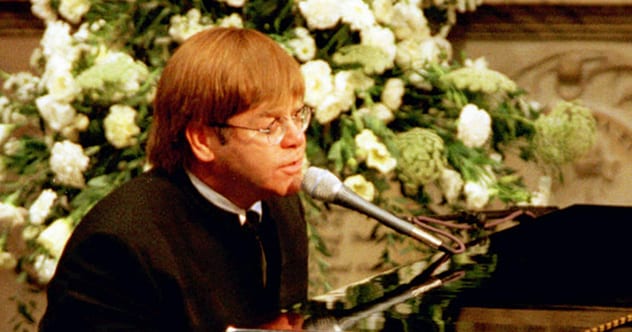 At the end of Furious 7, as Dom Toretto walks away from the beach, the song “See You Again” starts playing. It continues on as he drives along an empty road, halting at a stop street. He then hears a car pulling up beside him and looks up to see Brian O’Connor grinning at him. A montage of Brian’s F&F scenes fills the screen. As the two men pull away from the stop street, they drive alongside one another until each eventually go their own way, while the song continues to play. As the scene fades and the screen turns white, the words “For Paul” appears.

When this scene played in movie theaters for the first time, audiences were in tears as they took in the lyrics of the song and bid Paul Walker a final goodbye. The song by Wiz Khalifa and Charlie Puth is one in a long line of songs and covers underlined by tragedy and pain.

10 Rock Songs That Shook The World

10 The Cranberries – “The Icicle Melts”

On February 12, 1993, a month before his third birthday, James Bulger was abducted from a shopping centre in Bootle, Liverpool by two 10-year-old boys. The boys took the toddler to a railway line 2.5 miles away, where they tortured and killed him. The boys, Robert Thompson and Jon Venables, were convicted of the murder in November 1993, making them the youngest convicted murderers in modern British history.

When Dolores O’Riordan heard of the tragedy, she was shattered. Pouring her feelings into her songwriting, she wrote the song “The Icicle Melts” as a reaction to James’ murder. During an interview in 1994, she explained that the case had moved her so much that she had to write a song about it.

Some believe to this day, that O’Riordan was against abortion and that the song was actually about being pro-life. However, it has been commonly accepted that “The Icicle Melts” was written as a response to the horrific murder of little James Bulger.

In 2011, the DAS case against Kesha revealed that the singer had alerted several people in her life in 2005 that Dr. Luke, former producer and head of Kemosabe Records, had engaged in ‘unethical and unlawful actions against her.’ These actions included allegedly raping her in his hotel room in 2005 after giving her a date-rape drug.

The battle between Kesha and Luke continued for several years, with Kesha claiming that Luke forced her to release “Die Young” after receiving major backlash for the song’s lyrics. In 2014 Kesha filed a lawsuit against Luke claiming he sexually assaulted and hit her and that the aftermath of the traumatic event saw her suffering from depression, anxiety and post-traumatic stress. Luke responded by filing a countersuit against Kesha, her mother and manager Jack Rovner for defamation. Lady Gaga was dragged into the mess when she told a radio presenter during an interview that she’d been sexually assaulted by an unnamed music producer at the age of 19. Gaga however never confirmed that she was referring to Dr. Luke.

Lawsuits and fighting continued, with disturbing emails released in 2017 in which Luke appears to force Kesha into dieting. Luke exited as CEO of Kemosabe Records that year.

After his departure, Kesha released her first solo song since the lawsuit titled “Praying.” And even though the fighting between Kesha and Dr Luke still continues in 2021, this song is the one bright light throughout all of the darkness.

Kesha said that the song was about hoping that anyone, including abusers, can heal.

On December 14, 2012 20-year-old Adam Lanza shot and killed his mother and then set off for the Sandy Hook Elementary School in Newtown where he massacred 20 first-graders and six teachers before turning the gun on himself. A motive was never established, but it was claimed that Lanza had extensive mental health issues that prevented him from interacting in a normal way with other people.

In 2013 country music singer George Strait, who lost his own daughter in a car accident in 1986, paid tribute to the victims of Sandy Hook by writing a beautiful song called “I Believe.” He was hesitant at first, not wanting to offend the victim’s families by using the tragedy as inspiration for the song but his wife eventually convinced him to do it.

In one of the most frustrating criminal trials in history, 22-year-old Casey Anthony was found not guilty in 2011 of the first-degree murder of her 2-year-old daughter, Caylee. While her daughter was missing, Casey displayed almost no emotion and continued to party around town. When Caylee’s body was finally discovered and the investigation turned into a search for a murder suspect, all evidence seemed to point to Casey. Still, when the time came for a jury to convict her, there just wasn’t enough of said evidence to conclusively determine that she was guilty. Had things gone the other way and she’d been found guilty prosecutors would have pursued the death penalty as punishment.

Lead vocalist of country pop trio, Rascal Flatts, released a re-written version of a song called “She’s Going Places” in tribute of Caylee Anthony in 2011. Cledus T. Judd and Jimmy Yeary rewrote the lyrics and they all wanted to ensure that there would be no focus on Casey Anthony, but that the tribute would only be about little Caylee.

Songwriter, Bernie Taupin, was a huge fan of Marilyn Monroe and after co-writing Elton John’s hit song “Tiny Dancer” he started thinking about the best way to write a tribute song to her, without it coming off as tacky.

Out of these thoughts, the beautiful ballad “Candle in the Wind” was born. The title and lyrics of the song was inspired by a tribute to Janis Joplin in which the same phrase was used. The song was meant to be a heartfelt look at the life of Marilyn Monroe, and Taupin later said that the lyrics could also have been about James Dean, Montgomery Clift or Jim Morrison who were all cut short in the prime of their life.

Fast forward to 1997, when the shocking death of Princess Diana reverberated around the world, Taupin and Elton John decided to rework the lyrics to the song as a tribute to the princess. Elton performed it during Diana’s funeral and the song was also released as a single, becoming the best-selling single of all time in the UK.

Elton John never performed the reworked version of the song again, and vowed to only do so should one or both of Diana’s sons ask him to do so.

The song “Heaven” was written and recorded in 1983 and first appeared on the A Night in Heaven soundtrack album that same year. “Heaven” was inspired by the band Journey’s track “Faithfully”, and became Bryan Adams’ first number one single on the Billboard Hot 100 chart.

In 2001 DJ Sammy released a dance cover of the song which quickly reached number one on the UK Singles chart. A stripped-down “Candlelight Mix” version saw the light in 2003. Also in 2003, the KKXX radio station in California recorded a tribute version of the song to commemorate the first anniversary of the 9/11 attacks. A former program director asked his daughter to read words off a script while he recorded her. These words were interspersed with the original chorus of the song.

“Heaven 9/11 Remix” became one of the most requested songs in the radio station’s history and was soon played on radio stations worldwide.

Trent Reznor explained on Netflix’s Song Exploder that he’d always felt like an outsider and that sadness and a sense of abandonment always seemed to follow him. He also felt ill-equipped to deal with fame and all of these emotions let to the writing of the heartbreaking song “Hurt.”

In 2002, Johnny Cash recorded a haunting cover of the song, which provided a different interpretation of the lyrics. Cash, whose health was failing him at the age of 70, sang the words almost as if he knew that his life would end soon. The music video, considered today to be one of the saddest music videos of all time, was shot in February 2003, Three months later, Cash lost his wife. In September 2003, Johnny Cash passed away.

His final album American IV achieved gold status in the US.

Two days later, singer Maren Morris wrote “Dear Hate”, and recorded it a year later. She hadn’t released it however, because she felt that it wasn’t the right time.

On October 1, 2017 64-year-old Stephen Paddock opened fire upon a crowd of festival goers attending the Route 91 Harvest music festival in Las Vegas, killing 60 people. When Morris heard the news, she was devastated and posted the song online in tribute of the victims, saying that she realized that day there would never be a right time. She went on to write a lengthy Instagram post which included the following: “Hate is everywhere, and I’m sick of not doing enough. In the darkest tunnel, there is still love & music. That’s what it’s here for. Here is Dear Hate. Any cent I see from this I’m donating to the Music City Cares Fund.”

Led Zeppelin were (and still are) one of the most popular rock bands in the world. The band gave the world unforgettable songs such as “Immigrant Song”, “Whole Lotta Love”, and “Stairway to Heaven.”

Frontman, Robert Plant, suffered a great tragedy in 1977, when he lost his five-year-old son Karac due to illness. His wife had called him during the band’s American tour and told him that she was very worried about Karac because he’d suddenly become sick. It was a mere two hours later when Plant received another phone call, informing him that his son had died.

In his grief, Plant was ready to give up his career, but he eventually pushed through, working with his band members on Led Zeppelin’s final album, In Through The Out Door. One of the most memorable songs on that album was the tribute song to Plant’s son titled “All My Love.”

The song was recorded in one session, because Plant couldn’t bear to sing the emotional words over and over.

1 Oslo residents – “Children of the Rainbow”

Pete Seeger released the American folk and children’s song “My Rainbow Race” on his Rainbow Race album in 1973. The song was translated into Norwegian as Barn av regnbuen which means Children of the Rainbow and it became the sixth-highest selling single in Norway in 1973.

On July 22, 2011, Anders Behring Breivik killed 77 people by detonating a van bomb in Oslo and then opening fire on the participants of a summer camp on the island of Utøya. Breivik, who identifies as a fascist and a Nazi, claimed during his trial that “Children of the Rainbow” was an example of Marxist propaganda and that it was “brainwashing” Norwegian children.

Norwegian singer-songwriter, Lillebjørn Nilsen, who had translated the old American folk song, stood up in defiance of these remarks and arranged a mass performance of the song during Breivik’s trial. More than 40,000 people in Oslo alone stood together to sing the song, and more people joined in from squares across the country.