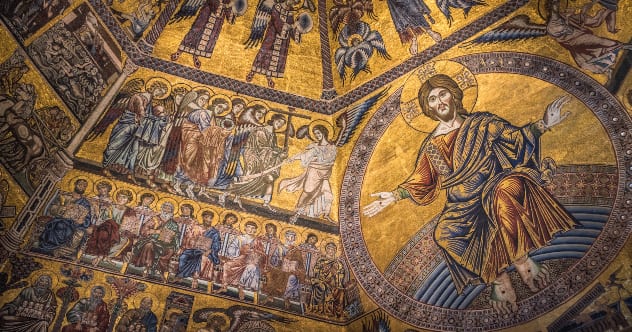 These days, the process of sainthood for a Catholic is pretty standardized. If you live a life in service to the church and fill that life with good works and virtuous actions like feeding the poor or caring for the sick, you can become venerated. Then it just takes death, answering a prayer while in Heaven, granting a verifiable miracle (usually a miraculous cure), granting another, and bada bing bada boom: sainthood. The stories of modern saints tend to blend together because they all have taken this path, with rare exceptions.

But a millennium or two ago, the process was anything but routine. In those days, people became saints for hundreds of different reasons and lived every type of life under the sun before they did—some virtuous, some a bit less so, some pacifist, and some like ecclesiastical John Wicks. That, combined with a good deal of hagiography in some cases, makes for some awesome saintly origin stories. Here are ten Catholic saints with wild origin stories.

Like many early saints, Saint George (who lived in/around the 3rd century) survives in somewhat vague and conflicting accounts from multiple sources. What seems true in all is that George joined the Roman military, rose through its ranks, and became a high-ranking officer. High enough that, when the Roman emperor began persecuting Christians, George confronted the emperor personally and told him where to stick his persecution.

Accounts of his subsequent torture vary drastically, but the common thread is that George’s faith didn’t budge one bit during his lengthy suffering, and his steadfast devotion inspired literal thousands to convert, including even the Roman empress Alexandra. He died a martyr, and his legend grew throughout the centuries. Eventually, a story emerged in which he had slain a mighty dragon, and, reading through the story, it’s clear who inspired Andrzej Sapkowski’s Witcher.

Most people’s default image of a saint is probably Italian, French, maybe Portuguese, or German, but what about Norwegian—specifically old Norse Viking? Saint Magnus Erlendsson was born to Viking parents on the Orkney Islands, a Scottish archipelago which, at the time, Norse Vikings had conquered. His family was all raiders, plundering and conquering across the future British Isles, but Magnus was a quiet, gentle, and pious Christian.

This brought him into conflict with his fierce family and eventually he was executed by his cousin Haakon Paulsson. However, his influence on his family and culture did not end with his death, and, to name one example, his nephew Sigurd famously became the first European king to personally participate in a crusade to the Holy Land.

Saint Sebastian was so cool that his Roman persecutors had to kill him twice, just to make it stick. For much of his life, Sebastian kept his Christianity private in order to survive and do good Christian works. And he rocked at it. In his post as a prison guard/soldier, Sebastian covertly converted many prisoners to Christianity, and eventually even converted the prison warden himself, who then set all his prisoners free.

He was eventually found out by the emperor, and sentenced to death. A firing squad tied Sebastian to a tree and riddled him with arrows. He survived and, like a total gangster, went right back to the emperor himself to tell him off. He was then promptly beaten to death, but still, not many people get the title of ‘murdered twice.’

According to legend, Saint Christopher started life as that one giant henchman that every ‘80s movie bad guy had. He was 7’6”, had a permanent scowl, and worked for the king of Canaan. Unsatisfied with his management style, Christopher decided to seek out the greatest king there was.

He journeyed first to the greatest human king, but seeing the king’s fear of the Devil, figured the Devil must be an even greater power. Finding a local thug who called himself the devil, Christopher planned to serve him, but then found out that this ‘devil’ feared the image of Christ. So, thought Christopher, Christ must be the true top dog. And he was right. While laboring to serve God, he was even visited by Christ Himself in the form of a child, who praised his good work. You have to respect someone like Christopher who tried every brand of king before picking the exact right one.

Moses the Black was essentially a career criminal—a habitual thief and murderer—who found his faith completely accidentally. One day in the 4th century, Moses was attempting one of his trademark home robberies, when a barking dog on the property alerted the owner. Frustrated, Moses retreated and decided to come back, try again, and this time turn the robbery into a homicide.

The dog alerted the owner again and Moses was forced to run and hide. Fearing discovery by authorities, Moses took shelter in a Christian monastery. And there he fell in love with their lifestyle. He became a monk himself, slowly found his salvation, and eventually allowed himself a very poetic death by bandit attack.

Saint Elmo is most famous these days for being the namesake of both a weather phenomenon and the worst John Hughes film. But his life was filled from start to finish with epic feats of fortitude that deserve the same fame.

The first time he was tortured and imprisoned for his faith, an angel helped Elmo escape. The second time, he was tortured by being sealed into a barrel full of spikes and rolled down a hill, but again an angel healed his wounds and freed him. The third time, he was set on fire and survived, then thrown in prison but escaped. It finally took one more capture, torture, and this time tying his intestines around a pole outside of his body in order to seal the deal on Saint Elmo.

Saint Quiteria is the most famous of the Nonuplet Sisters, and yes, they were actual nonuplets. Their mother, disgusted with them at birth, ordered a maid to drown them in a river. The maid took pity and found them a new home. When grown, all had found Christianity and refused to marry the Roman suitors to which they were promised. For this, they were imprisoned in a tower, but again they escaped the grim fate.

After this, the nine sisters waged “guerrilla war” on Roman soldiers, hiding in mountains and striking hard before fading back. Quiteria was essentially the leader of nine identical female Robin Hoods, and though that isn’t the only reason Quiteria was made a saint, it is by far the coolest.

Martyred by burning at the stake at 19 years old is a fate reserved only for A) legitimate demon-people, or B) those who were a few hundred years ahead of the social/moral curve. Joan of Arc is the latter.

At 13, Joan received visions from a trio of saints that convinced her of her holy destiny to defeat the English and drive them out of France. The crazy thing is, she played a major role in doing just that. Within a year of Joan’s entrance into the Hundred Years War between the two nations, the conflict turned from an English advantage to a French one. She was a charismatic, strategic, and fearless leader and helped lead French troops to a series of victories in the war before her ultimate capture and execution—again, all by the age of 19.

Agatha of Sicily had probably the worst life of anyone on this list, being subjected to near-constant torture and imprisonment from her teenage years until her death. But never once did she recant her faith, making her story both a tragedy and a triumph.

From age 15 until her death approximately five years later, Agatha kept a strict vow of chastity, which angered the Roman official who sought her affections. For her refusal to acquiesce to his advances, the official had her tortured, then imprisoned, tortured again, then imprisoned again. And she never gave in to his advances, nor altered her vow of virginity and faith in God. She died in prison, having never backed down, despite inhuman levels of suffering. If that doesn’t get you into the V.I.P. section in Heaven, what will?

These are actually two saints, but their stories are so intertwined we’ll keep them together. Perpetua was a noblewoman and Felicity her slave, though their relationship seemed more friendly and equivalent than the master/slave dynamic suggests. In short, both women were found out to be Christian by intolerant Romans, who sentenced them both to death. Felicity, pregnant at the time, was meant to be spared the death sentence. Then just days before Perpetua’s execution, Felicity gave birth and so was back on the (somewhat literal) chopping block.

The Romans planned to execute the two women by letting a wild cow trample them (for some reason). The animal indeed tore into them, but they survived. So a Roman soldier stabbed each with his sword. Though Felicity died instantly, Perpetua was only wounded. She pulled the sword out of her torso, put it to her own neck, and sliced it herself, ensuring that no one got to dictate the terms of her death but she.