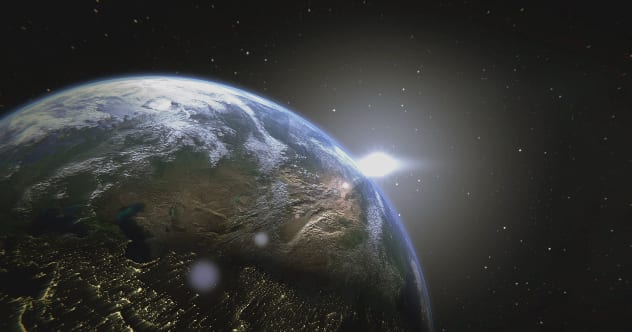 The world is going to end. You can define the end of the world in a few different ways—the end of human civilization, the end of all life, or the destruction of the entire hunk of rock—but no matter how you slice it, it’s all coming undone eventually. The only question is when.

Over the years, hundreds of different dates have been proposed for the apocalypse. So far, all have come and gone without so much as a single hell-mouth or horseman. But unlike those more apocryphal predictions, mainstream science is pretty certain of a few events that can—or will—cause the end of our world. Whether it’s microbes, machines, or missiles from space, here are ten ways scientists predict the world will end.

10 The Sun Turns on the Plants…

…and then the plants turn on us. The most accurate models of our sun’s future predict that in about 600 million years, the sun will have become bright enough to critically disrupt the carbonate-silicate cycle on Earth. This crucial interplay between silicon and carbon helps maintain carbon dioxide levels in the atmosphere and so this inevitable disruption will cause carbon dioxide levels to plummet.

Plants will become incapable of photosynthesis, and in turn, will no longer produce the oxygen we need to breathe. Nearly all animal life, and most ecosystems in general, will go extinct. So yes, when plants turn on us, they won’t have a choice, but that will hardly matter to any humans remaining on Earth as they slowly suffocate… or just evolve into sentient gas monsters. That’s what I would do.

About 66 million years ago, a comet or asteroid smashed into Earth, killing around 75% of all life on Earth. That includes the coolest things to ever walk the Earth, the non-avian dinosaurs. And more comets/asteroids keep coming, sometimes unsettlingly close. In 2020, an asteroid named 2020 VT4 passed just 230 miles from Earth (for context, the moon is 238,900 miles from Earth on average).

As deadly as asteroids are, they tend to come from fairly close—often the asteroid belt just beyond Mars. But comets more often come from farther away, meaning they pick up more speed on their way here. And these ‘dirty snowballs’ are hard to detect because they’re very dark. They don’t emit much light until they hit a heat source and begin spewing the bright, gaseous trails they’re known for. If one big enough, just tens of miles across, hits the Earth, then humans go the way of the dinosaurs. That is, until 66 million years later when a jolly old, bearded squid man plays squid-god and resurrects us for his theme park, Holocene Park.

Humans might not survive long enough to see a planet-shattering collision. We might not even make it past a couple of decades from now. That’s what many scientists and futurists believe, and the culprit: good old-fashioned Terminators. The term ‘technological singularity’ actually applies to a number of different scenarios wherein technological growth becomes uncontrollable, but the most popular, and generally scariest, is the ‘intelligence explosion.’

In short, as soon as we create a generalized artificial intelligence beyond our own, it will have the capability to produce an even greater intelligence beyond its own, and on and on until only the limitations of physics prevent further progress. This would quickly make humanity obsolete or worse—troublesome, primitive pests that need exterminating. Thus we cue a naked Arnold Schwarzenegger.

Way back in 1798, the economist/sociologist Thomas Malthus argued, quite simply, that our population will rise faster than the rate of our food production. This will trigger starvation, global conflict, and eventually population collapse, wherein most humans on Earth will perish. We know this event as a Malthusian Catastrophe.

Since its inception, Malthus’s hypothesis has been argued against vehemently by any number of disparate groups, many citing the numerous technological innovations that have enabled modern, large-scale food production. But the idea has nonetheless held to be at least somewhat true. From Malthus’s time to now, the human population has exploded to around eight times its size, and dozens of countries—billions of people—live in constant starvation. Whether or not a worldwide collapse will occur, many are currently unable to view food as a guarantee, and there are more each year.

The brightest and most energetic electromagnetic events ever detected in the universe, gamma-ray bursts, are no joke. The intense explosions are caused when a supermassive star implodes to form a black hole or neutron star, and when two neutron stars collide. Gamma-ray bursts give off so much energy that in a few seconds, they match the sun’s entire energy output over its entire lifetime. Yeah.

Luckily, we’ve only witnessed gamma-ray bursts in other galaxies. They’re far enough away that we’ve not felt any of their effects save for some minor light. However, many scientists think a gamma-ray burst is a possible culprit for the Late Ordovician mass extinction, the second-worst mass extinction in Earth’s history. If that were to happen again… well, hopefully, it would just create an entire planet of Hulks and Hulk-animals. It would be totally worth it just to see a Hulk-sloth.

No, we don’t mean a really great Eddie Van Halen solo, but in this case a volcanic super-eruption. And according to the Geological Society: “It’s not a question of ‘if’ – it’s a question of ‘when…’” That’s because the massive volcanic eruptions—which only attain the ‘super’ title if they spew at least 240 cubic miles of volcanic material—happen all the time.

There are over 60 known to have occurred, each potentially causing species-level extinctions and their own mini ice ages, and geologists believe that there have been more yet to be discovered. Though not much of a threat in our lifetime, Yellowstone might just be the undoing of many Americans and Canadians in a few thousand years—much to the delight of those who live in European tourist towns.

4 Diatoms, Emphasis on the Die

Diatoms are a type of algae famous to non-scientists for their colorful, geometric cell walls. To scientists, diatoms are famous for producing potentially up to half the oxygen on the planet each year and for constituting up to half the biomass in our oceans. They’re a big deal. That’s why it would be an even bigger deal if they were to start acting differently.

Joe Kirschvink, a Caltech geobiologist, has raised the concern that, if any number of climate changes cause diatoms to lose access to water (which they use to produce oxygen), they might reasonably switch to abundant salt. They would then use this salt to produce deadly chlorine gas. Given their numbers, this could quickly kill off the vast majority of life on Earth.

As uncomfortable as it may be, Earth’s orbit around the sun is not stable. Over the planet’s lifetime, it has changed and it will continue to change until the end. The change may even cause that end itself. Worse, a change in any other planet’s orbit could do the same.

Jupiter acts akin to a mini sun in our solar system—its massive gravity pulling on planets and other bodies. This can be extremely helpful, as when the big planet sucks up asteroids that may otherwise enter the inner solar system. But it can also lead to disaster, as it’s hypothesized that giant Jupiter might one day pull so hard on tiny Mercury that the little rock could smash into the sun, its neighbor Venus, or even Earth itself.

2 Fungus Among… Our Graves

Not just a plot device for the “Last of Us,” a worldwide fungal pandemic is entirely possible. A lot of coverage has been given to one particular genus of fungus, Cordyceps, many of which cause a sort of zombification of their host animals. Another group of fungi, the chytrids, is currently contributing to the worldwide extinction of all frog species.

One problem with fungal diseases is that they are relatively unstudied when compared to bacterial and viral diseases—and look at the millions who died from one of those. Whether it’s actual zombies or just a slow, painful death, fungal diseases are anything but ‘fun.’ Just ‘gal,’ I guess.

Easily the scariest of all of these… is about half of them all at once. Even worse is that most scientists tend to think that is what will happen. And soon.

Climate change will have a huge effect on weather patterns in the next few decades, making them gradually more erratic and extreme. At the same time, the increasing average temperatures will make many disease-causing microbes more common. Many plants and pollinator species, such as bees and bats, will have died (the bats by another fungal disease), making food more scarce as populations continue to grow. Ocean acidification and pollution will decrease the number of photosynthesizers there, and many other ecosystems will be thrown into relative disarray. Overall, the nearest and most likely end of the world is a slow, subtle, multi-pronged attack by… us.