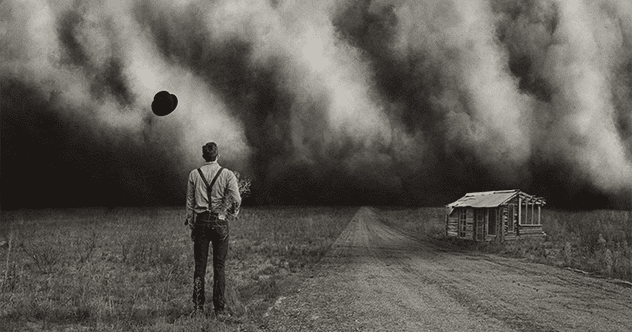 Weather is notoriously unpredictable. A sharply dressed weatherman smiles brightly through your TV set on a Monday morning, promising a sunny day, only for you to get caught up in a hailstorm of note and arrive at work late in a car peppered with dents.

Weather can also be extremely dangerous. Tornadoes, hurricanes and blizzards, to name but a few, cause havoc around the globe every year leaving death and destruction in their wake.
On this list are some of Earth’s most terrifying weather events caught on camera or drawn and painted for posterity, and serving as an ongoing warning to always seek shelter sooner rather than later.

In 2016, storm chaser Bryan Snyder was busy taking a time-lapse video of a storm over Tucson when he witnessed a rare sight. A giant mass of water seemed to plummet to the ground in what is known as a ‘rain bomb’ or microburst. Microbursts happen when a shaft of cooler air descends through heavy storm clouds and can lead to winds of 150 miles per hour that can rip trees clean from the ground.

Rain bombs mainly occur in the Midwestern United States and can be either wet or dry. They usually only last around 10 minutes but because of their sheer size, they look very scary. 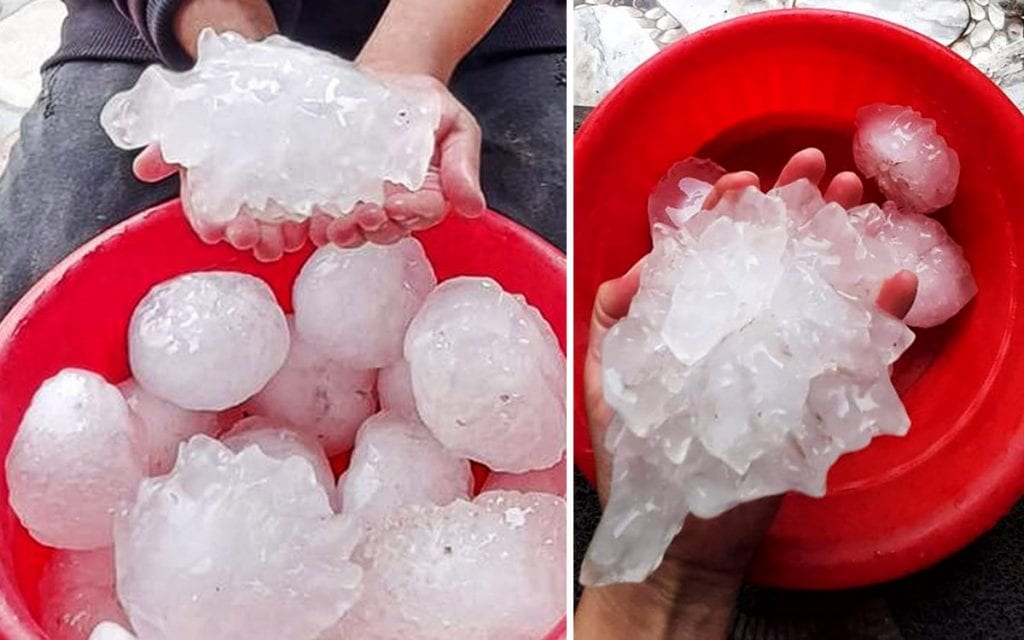 Libya is located in North Africa and is a predominantly desert country that sees very little rain on an annual basis.

However, in October 2020 an upper through moved across the Mediterranean and brought with it a storm that produced ‘gargantuan’ hail stones. The photographs that emerged of the incident brings to mind disaster movie scenes such as Geostorm, with some of the hailstones held in both hands because they were so massive.

Researchers at the time believed that the giant hailstones were a record for the African continent and quite possibly some of the largest ever photographed.

The above image depicts the worst recorded storm in Irish history. It is believed that a Category 4 (Category 5 in some descriptions) hurricane slammed into Ireland on 6 January 1839, killing around 300 and causing massive destruction.

The day before, a huge snowstorm blanketed the country leading people to believe that the drifts would take days to melt. However, 6 January broke sunny and bright and soon there was no snow to be seen. In the west of Ireland, people soon started noticing an eerie silence and when broke it by speaking to one another their voices travelled at unusually great distances.

The bright sunny day didn’t last as storm clouds started rolling in. Even as towns were plunged into near total darkness one after another, no one expected the horror that was to come. The wind picked up steadily until it reached hurricane force. Animals were lifted from the ground like ragdolls and terrified residents sought shelter in the old Parliament House.

A storm of this magnitude hasn’t repeated itself on Irish shores to date. 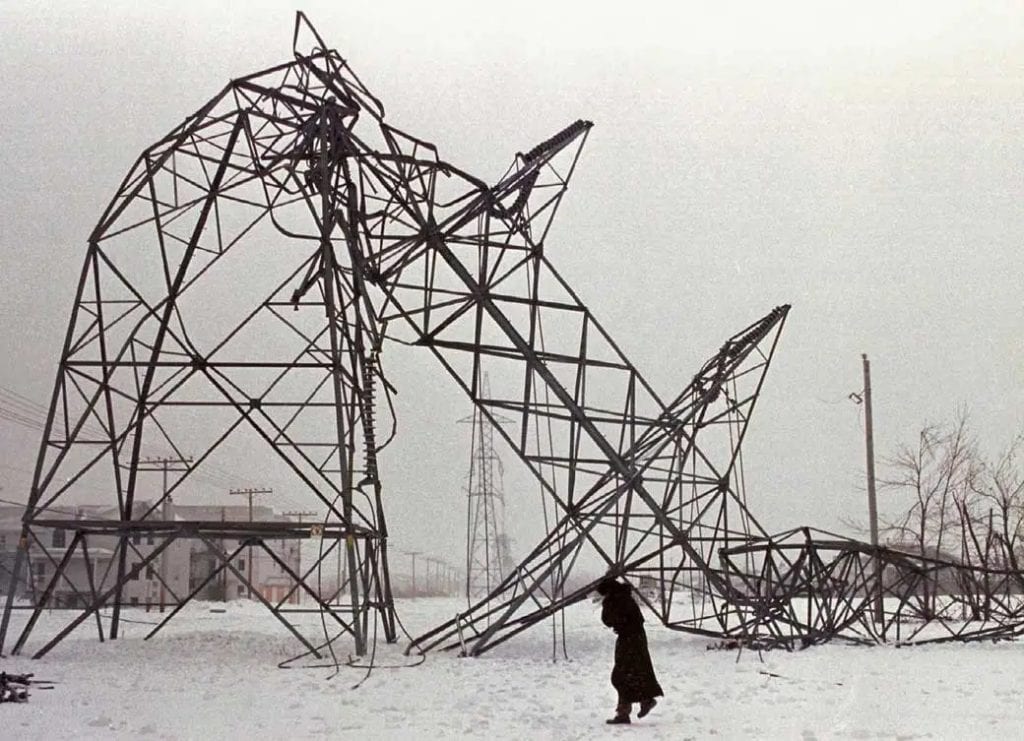 An ice storm descended upon northern New England, northern New York as well as southern Canada between 5 and 9 January 1998 and was heavily influenced by a strong “El-Nino” pattern that had been observed during the 1997 and 1998 winter period.

The storm caused loss of electricity to five million people, destroyed 11,000 hydro poles in Ontario alone, led to the deaths of 35 people and caused $3 billion worth of damage. In addition to this, around 300,000 farm animals perished from the cold.

Dubbed the Great Ice Storm of 1998, the storm was a combination of five smaller ice storms and let to the deployment of 16,000 Canadian military personnel; the largest deployment since the Korean war.

In 2014, scientists released a study that found pregnant women’s stress levels during the ice storm affected the genetic expression of their children. This meant that the possibility exists that these children were at greater risk to develop asthma or diabetes, because of the change in their genetic expression.

In November 2013, Typhoon Haiyan slammed into the Philippines with wind speeds of up to 313 km/h. In some areas, the typhoon dumped up to 281mm of rainfall in under 12 hours while 7-meter waves battered the coastline. More than 7,000 people died, while around 6 million were displaced.

Typhoon Haiyan remains one of the deadliest typhoons on record and was the most powerful storm of 2013. When it made landfall in the Philippines it was a Category 5 storm making for terrifying visuals. It is considered to be the country’s worst natural disaster and it also caused damage in Palau, Vietnam and China. 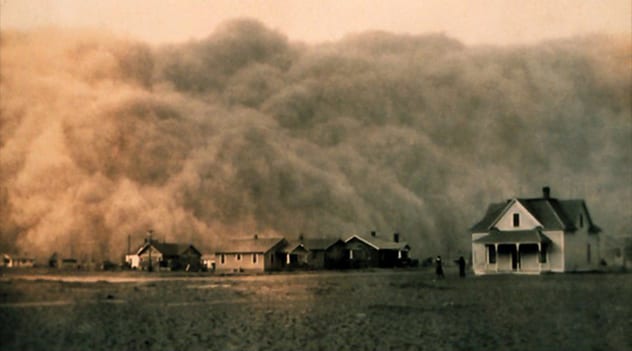 Saying that the Lone Star State is hot is like saying the sky is blue, but during one night in 1960, residents of Central Texas experienced the heat like never before. A burst of hot air hit the area near Kopperl just after midnight on June 15, causing crops to be burned up in an instant and automobile radiators to reach boiling point.

The heat burst appeared as the last of a thunderstorm collapsed over Kopperl. The lack of precipitation caused superheated air to descend at a speed of 121 kilometers per hour. At its peak the temperature came very close to reaching 140 degrees Fahrenheit. (60 degrees Celsius)

Terrified people wrapped their children in soaking wet towels and sheets, out of fear that the event signalled the start of Armageddon.
This meteorological phenomenon was soon dubbed “Satan’s Storm” and quickly earned a place in Texas folklore. 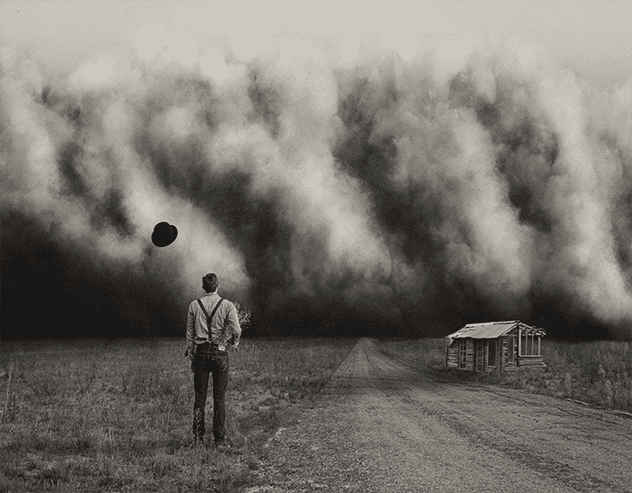 People living across the Central Plains were overjoyed to see the sun on Sunday April 14, 1935 after weeks of massive dust storms sweeping over their farms and destroying over five million acres of wheat. The sunshine didn’t last long unfortunately and before they knew it, a terrifying 1000-mile-long black cloud approached at around 60 miles per hour (96 km per hour) and overtook those who tried to outrun it. Some people wandered off the road, blinded by the black dust. Others sat in abandoned structures for four hours, praying the dust wouldn’t smother them.

17 people died from dust pneumonia and dust suffocation and several birds were found dead after the black cloud eventually subsided. Black Sunday formed part of the devasting events of the Dust Bowl era which in total left more than half a million people homeless. 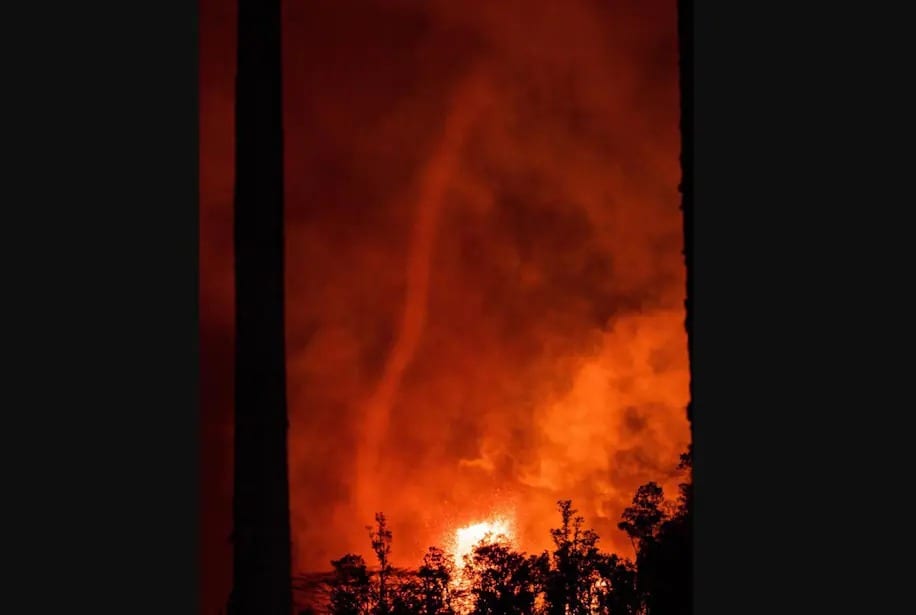 The peace was violently disturbed on Big Island in 2018 when the Kilauea volcano erupted in spectacular fashion in May, destroying homes as it spewed huge molten rocks. 2000 people were evacuated and by 27 May 24 fissures had erupted lava.

As if that alone wasn’t scary enough, the lava fountains which had begun fluctuating as high as 230 feet, gave rise to a so-called volcanic tornado. This tornado was ‘born’ after the intense heat caused the air to rise rapidly and form a vortex. Volcanic tornadoes can pick up pieces of lava and fling it about, causing even more destruction.

In 2014, volcanic tornadoes swirled above the lava of Iceland’s Holuhraun eruption in a cloud of poisonous sulfur dioxide gas. Despite the dangerous conditions posed by these tornadoes, scientists and journalists alike had to be sternly persuaded by police officials to leave the lava field. 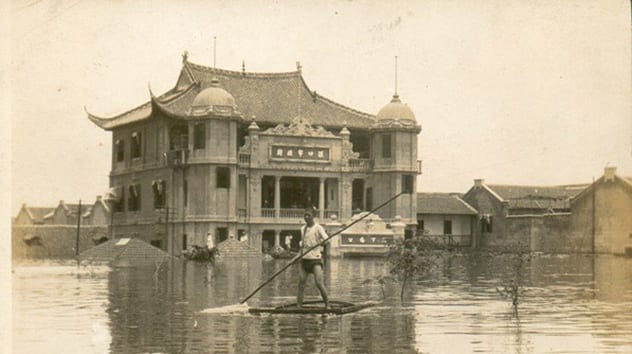 In what would eventually be one of the deadliest natural disasters of the 20th century, China experienced great loss of life in 1931 during a number of floods that hit the Republic. The months between July and November of that year saw strange weather patterns making itself visible as heavy snow and then rainfall soaked the area after years of drought.

As the unusually heavy rainfall continued into August, several cyclones also hit the country and this led to the Yangtze River, Yellow River and Huai River bursting their banks. Those who survived the flooding were soon exposed to typhus and cholera and out of sheer desperation, many turned to cannibalism and infanticide to stay alive. Some people took to selling their children or wives to ensure their survival. However, millions who survived the flooding, soon died from starvation as entire rice crops were wiped out. The overall death toll is estimated to be around 4 million.

It is thought that if flood-control measures were followed, much of the disaster could have been averted. 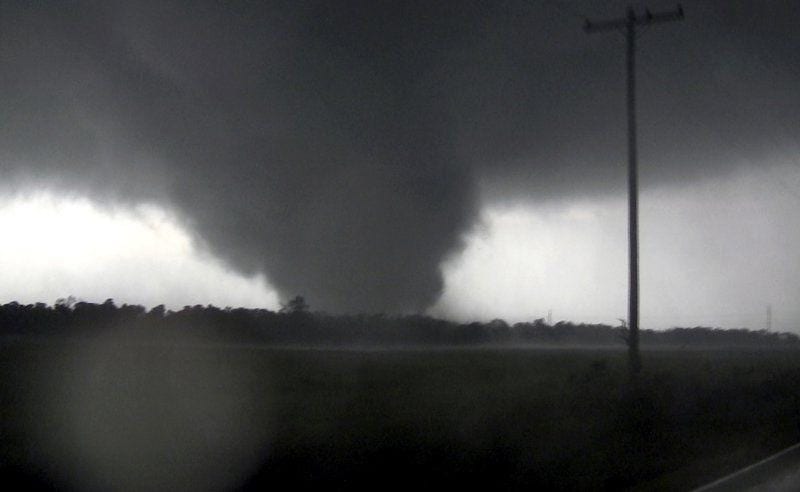 As tornado sirens wailed throughout Joplin on 22 May 2011, many residents either ignored it completely or were slow to get to shelter. It is believed that this was mainly due to the number of false alarms over the years.

Daniel Fluharty was working at a Pizza Hut at the time and he and some of his co-workers walked outside to see if they could catch a glimpse of a tornado. What they saw was a monster EF5 twister so huge they couldn’t see a funnel and they initially thought they were looking at a thunderstorm. One of Fluharty’s co-workers made sure everyone was safe by ushering employees and patrons into a walk-in freezer. Veteran Christopher Lucas, however, didn’t survive and was hailed a hero afterwards.

The multiple-vortex tornado killed 161 people and resulted in damage to the sum of $2.8 billion.

10 Terrifying Storms Straight Out Of The Apocalypse