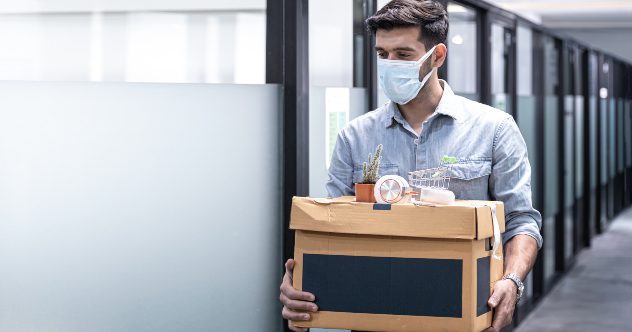 One of the most depressing things to come at the onset of the 2020 pandemic was that, suddenly, unemployment became a big part of millions of people’s lives. Even worse was that millions of others were forced to admit some version of, ‘welcome to the club.’ Though any expert will tell you that a small, steady level of unemployment is healthy on a macroeconomic scale, when you zoom in to the individual people and families affected, it feels like anything but healthy.

Getting unemployment benefits can be hard, staying on unemployment can be hard, and readjusting to the workforce can be hard. Not to mention that all of those struggles can be harder for some than others. Overall, it’s just a bleak topic; no one wants to feel like they have no purpose. But because the whole concept is misunderstood, there’s an increasing need to shed light on its darker areas. With this in mind, here are ten of the most soul-crushing facts about unemployment.

10 It Can be Misrepresented Easily

Of course, it’s no surprise that politicians misrepresent—and recently even completely fabricate—numbers to fit their agendas. Unemployment numbers are no exception. Most commonly, the unemployment you hear in the media is called the U-3 rate, a more simple measure that adds up the number of people who do not have jobs but have actively searched for them in the last four weeks. That in no way tells the full story and there are multiple other ways to calculate unemployment.

The U-6 is the most popular alternative, and it expands to include those who are unemployed and seeking a job but not in the past four weeks, the disabled, those in school, those who have a part-time job but want full-time, and discouraged and underemployed workers. You might say, ‘U-3 and U-6? Are there others?’ Yes, one, two, four, and five also exist, each with their own variation on who is included. Since few sources will ever make it clear which metric they’re using, it can be hard to compare any two numbers and make sense of the unemployment rate.

9 It was Completely Unprepared for COVID

The onset of the 2020 COVID-19 pandemic was the worse economic crisis since the Great Depression and was completely unprecedented in how quickly it emerged. From February 2020 to May 2020, the number of unemployed in the U.S. rose by over 14 million in only three months. Compare that the Great Recession of the 2000s, which increased the number of unemployed by around only nine million over three years.

States, which primarily handle unemployment themselves, struggled to grant claims, and even to respond to them at all. In March 2020, the state that responded to the highest number of claims was Rhode Island, though it shockingly only managed a mere 51%. In contrast, the worst-performing states were Indiana and Arizona, which only got to about 2% of their claimants.

There are reasons for that low response rate. One of the major reasons being that unemployment has been purposefully made hard to get. Some states, in an effort to force their unemployment numbers down for the sake of optics (which is to say, not the actual number of unemployed workers, just the amount getting aid), have deliberately gutted the unemployment infrastructure and made the application process a nightmare.

Florida senator Rick Scott became the poster child for this process when his obfuscation of the unemployment application process cost working-class Floridians dearly in the midst of the pandemic. As an aide for Florida governor Ron DeSantis said, “It’s a sh— sandwich, and it was designed that way by Scott… It was about making it harder for people to get benefits or keep benefits so that the unemployment numbers were low to give the governor something to brag about.”

7 It’s Not The Free Ride Some Think

Once you’re on unemployment, life can be worse than ever. The social stigma alone can be tough, and the overall connection between joblessness itself and low happiness is well documented.

A number of studies have found significant connections between unemployment and increased depression, anxiety, physical health problems, and even divorce. As researchers Jackson and Crooks put it regarding Australians on unemployment, “‘You don’t live when you are unemployed—you exist.”

The United States’s wealth disparity is growing quickly, and it’s not just ‘the rich vs. the poor.’ Statistically, another accurate way to represent that data is ‘the old vs. the young.’ Those aged 55 and higher hold approximately 75% of all countries’ wealth and property, and that disparity is only increasing.

5 It Could Become the New Norm

For a number of reasons, the unemployment rate is expected to increase steadily in the coming decades. Of course, there will be constant dips and surges, just that the overall numbers will increase from decade to decade. Many experts believe the single biggest reason for this is automation.

More and more jobs are being replaced by robots, even as we speak. Grocery stores have seen untold thousands of jobs replaced by self-checkout machines, and recently by inventory robots. Drones are beginning to deliver packages and small automated vehicles deliver food. While 20 years ago, this was considered nonsense futurism, it is a very real phenomenon and it is happening now.

4 Even at its Worst, the U.S. was Better Than Many

From the 1050s up until the 2020 pandemic, U.S. unemployment rose and fell in small measures, averaging somewhere around 6%. In April 2020, it surged to a staggering 14.8%. That rapid uptick in joblessness brought with it mass suffering and poverty to the U.S. But even then, at its worst, U.S. unemployment didn’t come close to the rate in other countries.

By the end of 2020, the U.S. unemployment rate had fallen back to around 4%, but other countries were not so lucky. Many African nations were stuck with unemployment rates above 20%. Some countries like Nigeria, South Africa, and the Democratic Republic of Congo were even above 30%. If you were unfortunate enough to suffer during America’s 14% unemployment, imagine that number doubled and far longer-lasting.

3 It Doesn’t Affect Us All Equally

Even excluding other countries, within the U.S. there is a consistent and significant disparity between who requires unemployment during crises and how long they require it. When the Bureau of Labor Statistics decided to track demographic data regarding unemployment in 1972, the rate of unemployment among black Americans has almost exclusively stayed at or above twice the rate of white Americans.

For women of color, specifically black and Latino women, the discrepancy is even worse. In addition, metropolitan areas with histories of segregation and discriminatory legislation fared worst of all. In Washington D.C. black unemployment was almost five times as high as white unemployment in 2020.

2 It Can be Necessary… For Us

That is one the saddest facts of all: that unemployment has been so necessary so many times. Looking again at the devastating pandemic of 2020, many studies have shown the benefit that unemployment money provided for working-class families, even helping them get back to work earlier than expected—the exact opposite of the handout mentality.

In April, many Americans on unemployment began receiving an additional $600/month as part of the CARES act. Critics of the program maintained that the increased benefits would pay many workers more than their original wages and would discourage them from reentering the workforce. That’s certainly a logical prediction, but more often than not, the opposite turned out to be true.

According to a study by JP Morgan Chase, more than half of the unemployed who received the extra benefits returned to work before the benefits were set to expire in July. One real effect of the benefits, according to the study, was helping families from drawing too heavily from their savings while unemployed.

1 But the Rich Use it More

The truly saddest fact about unemployment is just how thoroughly some depend on it, even to the point of completely taking advantage of it and stealing it from their fellow Americans. Those people, by the way, are the ultra-rich and leaders of the largest corporations. While unemployment is seen as a handout and generally derided by some politicians, those same politicians often support giving similar supplemental money to ultra-rich banks and other corporations.

Since the 2008 economic crisis, over $600 billion have been apportioned between around 1,000 corporations. Even at its absolute highest peak in U.S. history in April 2020, total unemployment paid to citizens was only $48 billion. That figure was A.) completely unique, and B.) drastically tapered off as the year progressed. The real problem with government handouts in the U.S. is not at the personal level, but rather at the corporate one.