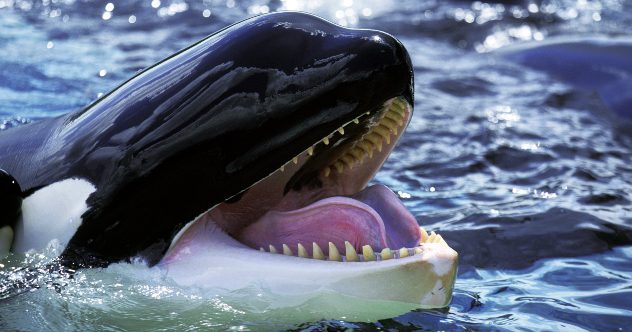 It seems like every day you stumble across some new animal fact on the internet or news, and that’s because there actually are more facts every day. At any given time, there are thousands of ethologists- the biologists who study animal behavior- carrying out thousands of studies and experiments, helping to fill in our knowledge gaps on the natural world. And sometimes, what they find is downright terrifying. With millions of animals species all vying for survival in an unforgiving world, many have developed some brutal strategies for coping. Some are for hunting, some are for defense, and some are just plain mysterious, but all of these are enough to make your next stroll through nature a bit more guarded. Here are ten of the creepiest animal behaviors caught on film… yet.

As crazy as it is, this behavior doesn’t just occur in one species. We know many species to commit mass suicides (though not in lemmings, as is popularly believed). The range of species known to kill themselves en masse is staggering—everything from insects to birds to amphibians to mammals and more. And we rarely have any good idea why.

When asked why cetaceans, the group that includes whales and dolphins, so commonly strand themselves on shore to die (known as beaching), the ethologist Darlene Ketten once said, “I often use the analogy of a car crash, because a lot of things can go wrong but you get the same result. Statistically, we are only able to determine the cause of a stranding in about 50 percent of all cases worldwide.” In the case of beaching, the most common causes are diseases, red tides, injuries, and human habitat disruption, but conclusive answers are few and far between. Usually, all we are left with are piles of animal corpses and mysteries.

Speaking of cetaceans, they don’t just harm themselves. Before they kill their prey, they have a habit of torturing it, too. For fun. Orcas, for example, are known to ‘toy’ with their prey, grabbing them and releasing them again and again. They’ve also been recorded submerging their helpless prey (often air-breathing seals) in their jaws briefly, just to bring them back up and back down over and over. Though they could easily drown their prey or simply eat them quickly, some seem to prefer to watch the hope rise and fall in their prey’s helpless little eyes.

Dolphins, too, have been seen causing seemingly needless harm to their prey. Like orcas, they have repeatedly been seen batting injured prey back and forth with their tails like a grotesque marine version of badminton.

Golden eagles are one of the largest eagle species, and eagles are some of the largest birds of prey. But unlike the few larger species, which are mainly vultures and condors, eagles obtain the majority of their food from active hunting, not scavenging. This typically means rabbits and mid-sized rodents but can include essentially anything that eagles can reasonably takedown—including mountain goats, which they sometimes kill by throwing them off cliffs.

There are a few occasions where researchers have witness golden eagles going after mountain goats- which are much heavier than the eagle- with the ingenious strategy of simply knocking them off the cliff they’re perched on. As the goats are too heavy to lift, the eagles have developed this new strategy, which is both clever and horrifying.

Perhaps it’s better to say that this behavior is more metal than creepy. But if you’re a wild deer in this situation, there’s little difference. Tigers have been seen using thunderstorms as camouflage for their hunts.

As the dark grey clouds that signify a thunderstorm accumulate, tigers begin to hunt. The darkness of the clouds helps hide their form as it slinks through the tall grass. The steady, rumbling thunder rolls help mask the already muted noise from their feet. As tigers already know to be downwind, that doesn’t leave any of their prey’s senses operative enough to detect the feline predator before the pounce. (And if you’re close enough to a tiger to taste or touch it, it’s too late).

Slow lorises are an internet favorite for their cute and somewhat derpy appearance. And one behavior, in particular, has made for sharable video fodder again and again. When “tickled,” Lorises tend to raise their arms straight up, which has caused many to assume that they simply love being tickled. In reality, the Lorises feel threatened by the touch and are revealing the deadly venom glands in their armpits.

It’s true: lorises are one of the few mammals- and the only primate- to produce venom, and they do so in glands in their armpits. The venom is deadly to humans and curiously seems to have evolved as part of a strategy by which lorises mimic cobras. When threatened, lorises raise their arms, sometimes clasping them atop their heads and hissing, possibly mimicking venomous cobras. They take this one step farther by licking venom from their armpits, which then makes their bite as deadly as a cobra’s, as well.

5 The Taste of Human Flesh

Herbivores eat meat, too, and it can be terrifying. Thought to be due to nutritional deficiencies, a whole range of herbivores have been spotted turning to carnivory from time to time. Due to how common they are, this most often happens with deer. Usually, they feast on small woodland critters, but it was human flesh in at least one instance. At a body farm in Texas, a deer was caught on film “gnawing on a (human) rib bone.”

I have personally witnessed this first hand. It gave me nightmares. I once saw a deer in my parent’s backyard bent over the corpse of a rabbit. It bit into the body, crunching its bones, and when it raised its head to chew the meat, its muzzle was soaked in blood. Absolutely demonic-looking.

You may have heard the dubious claim that some spider silk is stronger than steel. Well, that’s actually true. Though only some spiders make webs, all of them produce silk, which they use in several ways (or don’t use at all). There are, therefore, many different types of silk, and some, like “dragline silk,” are indeed scary strong.

Regarding straight-up tensile strength, dragline silk is stronger than most steels and comparable to the rest. In extensibility, however, there’s no comparison. Some silk can be stretched five times its length without breaking. When you combine tensile strength and extensibility, you get the measure known as toughness, in which silk absolutely dominates. The silks are unbeatable by all but the most cutting-edge (and expensive and difficult to produce) synthetic materials. When you consider that some spiders used to be up to two feet long, it makes for some creepy what-if scenarios.

It’s a well-known fun fact that mantis shrimps are impossible alien monsters. For one thing, they have 16 photoreceptors (compared to our three), so can see potentially millions of more colors than we can. But the creepiest thing about mantis shrimp is their punch.

The shrimp can punch with their front limbs at speeds of 75 feet/second. That’s about as fast as a .22 caliber bullet. That can smash through the shells of clams, crabs, and most other creatures they encounter. It is, in fact, the strongest strike of any animal. People who have been unlucky enough to be on the receiving end of the hit will attest to its power.

There is a behavior known to biologists as autotomy, in which an animal deliberately sheds part of its body for self-defense. The most famous example is lizards shedding their tails to escape predators. But sea cucumbers take the strategy to a whole new level.

When threatened, some sea cucumbers will contract their body walls and forcibly shoot their internal organs out of their body. Their anus, intestines, tentacles, muscles, parts of their respiratory tract, and even parts of their reproductive organs- all of them are shot out of the body, potentially entangling predators in the sticky, adhesive mess.

Normal assassin bugs are creepy enough. They feed on their prey by stabbing it with their proboscis, injecting it with a paralyzing agent, then injecting it with proteins that dissolve it from the inside out (while still alive and paralyzed), and lastly, sucking out the gooey innards. But one species, Acanthaspis petax, is even worse.

The creepy crawly uses the bodies of its victims as camouflage. After killing its prey, usually ants, it rubs an adhesive on them and sticks them onto its back. And it keeps doing this, body after body, until it has a giant ball of dead ants atop its back. The stack of ant bodies potentially masks the assassin bug’s scent with the ants’ scent and also makes the bug look larger than it truly is- seemingly protecting it from discouraged predators.