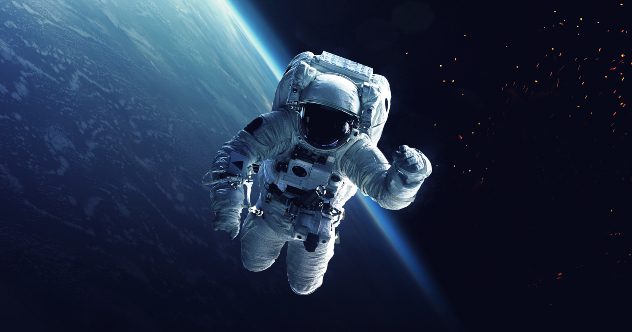 Astronauts rock. They’re what half of all kids dream of becoming when they grow up. Those who successfully achieved the dream can tell you—it’s worth it. Being one of the first professionally trained humans to leave our home planet, floating in space, and looking back at the tiny blue marble, is an experience unparalleled in its awe and majesty.

They also spend the whole time puking and wading through clumps of their own dead skin.

For all the majesty that comes with space exploration, there’s just as much indignity and danger. Alan Shepard, the first American to fly to space, spent the whole trip with soaked tighty-whities. And in the 60 years since, it has not gotten much better. Every ‘one small step for man’ is taken by a foul-smelling, near-crazed, irradiated soldier/engineer just one bad (artificial) day from going full Event Horizon.

With that in mind, here are ten of the worst things about being an astronaut.

10 The Training is a Nightmare

Yes, millions of kids dream about being an astronaut. Too bad less than 1% of applicants are chosen, and just to apply in the first place generally takes an advanced science degree and exceptional military service. In other words, that 1% is already picked from the top 1%.

But if you do make it, the preparatory training is intense. One training routine is spending entire days submerged in a giant pool, practicing the mechanical procedures necessary to keep a station in working order. Another test is to swim laps while wearing the standard 200+ pound NASA flight suit. Still another test/training procedure is taking a ride on the famous Vomit Comet, a plane that flies in parabolic arcs, simulating weightlessness. It does this around 50 times per session, often earning its nickname.

9 You’ll Get Motion Sickness and Puke

Speaking of vomit: it’s very hard to keep your lunch down in space. The lack of gravity/low gravity keeps the vestibular system in your inner ear from working, meaning your sense of balance is wrecked. When the inner ear can’t function in a way that matches what the eyes are perceiving, you end up with motion sickness, which as we know, leads to puking.

Though astronauts generally acclimate to the motion sickness, known as Space Adaptation Syndrome, within a few days, other, more lingering problems keep puke a constant threat. For one thing, both shuttles and stations notoriously stink. As astronaut Chris Hadfield put it, “The toilet is right there in the middle of everything. You have up to seven people, and it’s a tiny little ship. It’s like seven people in a camper van with a porta-potty for two weeks, where you can never get out.”

8 Your Skin Falls Off

When asked what the grossest thing about living in space is, ESA astronaut Time Peake responded, “watching the soles of your feet disintegrate.” Because astronauts use the bottoms of their feet so rarely—almost exclusively when they exercise—the soles soften more and more, until they become “like a newborn baby’s.”

But to soften, the feet have to gradually force off all the hard, calloused skin built up over a lifetime of walking. The skin flakes off bit by bit, clump by clump. After a few weeks, astronauts have to take care removing their socks, lest they unleash “a shower of dead skin-flakes ejected into the cabin.”

When the 2020 pandemic first started, when many people were forced to cope with extended relative isolation for the first time, a number of astronauts were asked how they dealt with their own isolation so often. The answer? With a tremendous amount of hard work every day.

Astronauts report struggling with the lack of quality sleep (see below), isolation, loneliness, depression, anxiety, stress, fatigue, mood swings (called emotional lability), concentration deficits, and even PTSD. It’s just plain hard to work a full day in which any failure can mean death, then go to bed without your loved ones, not sleep, and repeat the same thing over and over, perhaps hundreds of times in a row.

‘Wait, that’s impossible,’ you say. ‘Space is a vacuum; without air to vibrate, there’s no sound. It’s completely silent.’ As true as that is, it doesn’t apply to the inside of shuttles and space stations. In fact, they are insufferably loud. Even loud enough to partially deafen astronauts.

Space stations like the ISS are an ecosystem of mechanical and digital parts, rotating, vibrating, and whirring constantly. Even the living quarters on the ISS, far from the scientific instrumentation at the heart of the operation, can be up to 75 decibels. The CDC warns that prolonged noises over 70 dB can damage hearing. Indeed, NASA astronaut Bill McArthur and Russian cosmonaut Valery Tokarev both suffered hearing loss after their 2006 stay on the ISS.

After a hard “day” of calculations, engineering, and science, you’d think astronauts could at least count on a restful “night” of sleep. Too bad about a dozen phenomena conspire to keep that from ever happening.

For one, there’s the aforementioned constant noise. For another, there are the flashing lights astronauts see, even when their eyes are closed, thought to be caused by cosmic rays passing through their eyelids. Then there’s the sporadic and frequent sunrises and sunsets that wash over the ISS, sometimes up to 16 per day. Then there’s the lack of gravity, which forces astronauts to tie themselves to a wall to avoid bumping around their cabin.

Here on Earth, our atmosphere and our magnetic shield team up to shield us from the vast majority of cosmic radiation that comes our way. In space, astronauts spend the entirety of their time beyond those two barriers, and so are constantly exposed to cosmic radiation—roughly as much as survivors of the atomic bombs at Hiroshima and Nagasaki.

Astronauts face up to 2,000 millisieverts (the unit measuring biological damage as caused by ionizing radiation) due to constant bombardment with high-energy protons and ions. As stated, these levels are similar to those experienced by atomic bomb survivors. Studies have suggested strong links between this radiation and multiple types of leukemia and lymphoma. NASA, for its part, has been continually re-evaluating ways to limit exposure, including shortening ISS stays by the more at-risk astronauts.

The lack of gravity/low gravity in space comes with its own slew of challenges: motion sickness, skin loss, and tied-up sleeping issues mentioned above, but also many more.

For one, gravity is what keeps your stomach contents down and lets gases escape up, and so without it, burping is impossible and your stomach becomes one big ball of acid. For another, gravity helps determine your height on Earth by compressing your vertebrae. Without it, astronauts literally grow taller in space. Their spine stretches out from the lack of compression in as little as a few hours. Once returned to Earth, the spine recompresses just as quickly.

As Korean astronaut Soyeon Yi put it, “Both experiences were super painful. I gained an inch in space over the course of three hours and shrank when I returned in the same short period of time. My back pain was crazy severe.”

2 No, Seriously, It Really Needs Gravity

Not to beat a dead, floating horse but your body really needs gravity. It’s not just cosmetic and superficial changes that the loss of gravity can induce, but serious issues affecting the muscles, blood, and bones.

Without gravity to assist it, blood flow in astronauts is out of whack and sometimes even flows backward. While most of the time, this just leads to puffy, reddened faces and weaker legs, it has at least twice led to blood clots in jugular veins, which could have easily been fatal. In addition, muscles suffer both from the lack of circulation and lack of use.

Astronauts are forced to exercise constantly to keep their muscles from atrophying and, even then, have to go through one- to two-month reconditioning programs upon returning. This is also true for bones, which depend on gravity like muscles do, as astronauts are much more likely to get osteoporosis while in space.

1 Going to the Bathroom is the Worst Part

Okay, obviously it doesn’t compare to the risk of leukemia or a fatal blood clot, but astronauts often stand by it: peeing and pooping are the two worst parts of living in space.

Peggy Whitson, whom you may know for holding a slew of NASA records, including most time in space, has said that using the bathroom was her least favorite part of life in space. Peeing, which is considered the easier of the two, involves sucking the pee from your nether regions with a machine that then converts it into the water you drink.

Pooping is worse, as it involves filling a glorified porta-potty pit until the point at which, as Whitson said, “you have to put a rubber glove on and pack it down.” But of course, due to the low gravity, some turds escape the pit and go rogue, floating about the station. Then the world’s best of the best, our pioneers in cosmic exploration, have to play ‘catch the turd.’