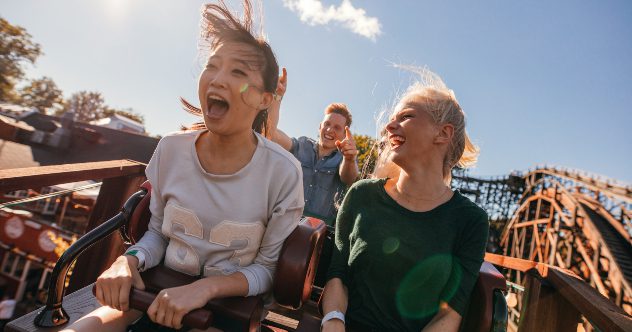 There are few purer and more intense feelings than the concentrated cocktail of fear of ecstasy that is riding a theme park ride. Whether it’s water slides, rollercoasters, or drop towers, the main attractions at theme parks offer visceral, terrifying experiences in the safety of seatbelts, straps, rails, and tracks, all professionally and consistently maintained to the highest of safety standards.

Except that’s only true at some parks and not others, and it’s almost impossible to find out which is which.

Regulation of a given park’s safety might come from local governments, state governments, or the Consumer Product Safety Commission, on a case-by-case basis. The CPSC themselves have called it “a fragmented system.” This has lead in part to around 30,000-45,000 accidents at theme parks each year.

With so many unfortunate accidents to choose from, here are ten of the wildest and worst theme park accidents of all time.

Sometimes non-fatal accidents leave you chilled in a way that a simple death could not. That’s certainly true of the incident involving 13-year-old Kaitlyn Lassiter, who survived an accident on Six Flags Kentucky Kingdom’s Superman: Tower of Power ride. Yes, she survived, but her feet did not.

On June 21, 2007, Kaitlyn got on the Tower of Power, a drop tower ride that simulates a 154-foot fall. Just after the ride began, one of its many cables snapped. The ride dropped, and the other passengers were struck by the cable, suffering only minor wounds. Unfortunately for Kaitlyn, the cable happened to wrap around her ankles. It shattered her left femur and held tight as she dropped, severing both of her feet. Luckily, doctors were able to reattach her right foot, but the much more injured left leg had to be amputated below the knee.

On June 9, 1979, Sydney, Australia’s indoor ghost train ride at Luna Park caught fire. The incident killed seven people—six of them children. As the park had never installed a sprinkler system, the fire burned the entire ride to the ground. We still don’t know what caused the mysterious fire in the first place.

Approximately 35 people were riding the train through its spooky interior track when the fire started. Whether due to an electrical accident or, as was later claimed, an arson attack by a mob boss, a fire broke out. The staff noticed the smoke and began to pull guests out of the ride, but couldn’t get to all of them before the fire was too large. The park was understaffed and the nearest fire hose couldn’t reach the entirety of the ride, and so seven lives were lost, along with the train itself.

Not to cry conspiracy, but this accident has a tiny fraction of the coverage online of what the others have, despite leading to a gruesome death. Perhaps that’s because it took place at the Happiest Place on Earth—and one of its richest and most powerful: Disneyland.

September 5, 2003, was the day that Disney’s Big Thunder Mountain Railroad rollercoaster malfunctioned. The lead car on the faux locomotive lost its rear wheels and shot up into the roof (during the indoor portion). The following cars then continued on under the now-embedded lead car, slamming Marcelo Torres into it, killing him.

About the accident, the California Division of Occupational Safety said that “machinists did not understand or follow the park’s maintenance procedures and operators were not given the right guidelines.” The following year, Torres’s family settled with Disney for an undisclosed sum.

In 1986, the West Edmonton Mall in Alberta, Canada, was the largest mall in the world. The rollercoaster contained within it, The Mindbender, was the tallest indoor roller coaster in the world. Not sure that a rollercoaster inside a mall is a good idea anyway. Regardless, it became a major attraction twice over, and its attendance numbers reflected that, some hundreds per hour for decades.

But only four passengers were unlucky enough to be flung from the ride, three of them to their deaths.

Due to a combination of faulty design and improper maintenance, on June 14, 1986, a car detached from the coaster track, its restraints opened, and four passengers were launched to the concrete floor of the mall. Three died, and the fourth surviving passenger, Rod Chayko, has unsuccessfully lobbied for decades to have a memorial to his unlucky fellow riders placed in the mall.

Due to some unknown cause, the fire broke out on May 11, 1984, with 29 guests inside the ride. The attraction, built mostly from flammable materials, went up quickly. Some guests thought the fire was all part of the staged horror and reacted too slowly. Similarly, though more grim, the badly-charred bodies of the eight teenagers who died in the flames were initially thought to be just part of the scene.

One of only two deadly water rides on this list, the river rafting ride Thunder River Rapids in Queensland, Australia, earned the honor on October 25, 2016. That day, four of its passengers died by being crushed in its conveyor mechanism.

Due to a failing pump, the ride’s water level lowered dramatically, stranding one of its rafts. When the next raft reached it, the two collided and the second raft was flipped. Of the raft’s six passengers, two of them—smaller, nimbler children—were able to escape the raft, while the rest went under. They remained strapped to their seats while upside-down and were forced into contact with the conveyor mechanism, crushing them to death.

Elizabeth Gilreath was only 11 when she was the unfortunate victim of one of the most gruesome ride accidents in history. On May 5, 2016, Elizabeth was riding the spinning King’s Crown ride at a festival in Omaha, Nebraska, when her hair was caught in the ride, ripping her scalp from her head completely.

For over five minutes, Elizabeth screamed for the ride to stop, but it didn’t. Not until a good samaritan, Jolene Cisneros, took the initiative to physically stop the ride herself with her bare hands. Elizabeth lost the entirety of her scalp and hair and suffered severe damage to her eyes. Thanks to dozens of surgeries, she pulled through and even recovered much of what she’d lost.

The other water ride to make it to the list is the former tallest waterslide in the world, Verrückt. On August 7, 2016, 10-year-old Caleb Schwab (son of a Kansas state representative) died while braving the tall slide.

Caleb descended the slide at the front of a raft containing two adult women at its rear. This seemingly innocent grouping would ultimately be the cause of his death. Because of the uneven weight distribution, when the raft reached one of its mini hills on the way down, the whole vehicle went airborne. Caleb hit part of the (seemingly) protective metal netting and was completely decapitated. The ride was closed and later deconstructed entirely.

The deadliest rollercoaster accident in American history happened at Krug Park in Omaha, Nebraska, on July 24, 1930. A bolt came loose in the park’s sole rollercoaster, the Big Dipper, causing four of its cars to fly off the track and plummet to the ground.

The cars fell 35 feet, and three of the four cars landed face down. Four people died; another 17 were injured. This made it the deadliest crash in the country. The incident caused the City of Omaha to ban all rollercoasters, sealing the fate of Krug Park, which closed within the decade.

1 The Other Big Dipper Accident

The world’s largest coaster accident took place on May 30, 1972, and this Big Dipper was located at a fair in Battersea Park in London. As the coaster’s cars were being pulled up the track towards its first peak, both the hauling rope and the cars’ emergency brake failed. The cars rolled backward, fell off the track, and smashed through a barrier.

Five people were killed, all of them children, and another 13 were injured. The coaster was dismantled, and without its star attraction, the fair suffered a similar fate to Krug Park, closing within a couple of years.