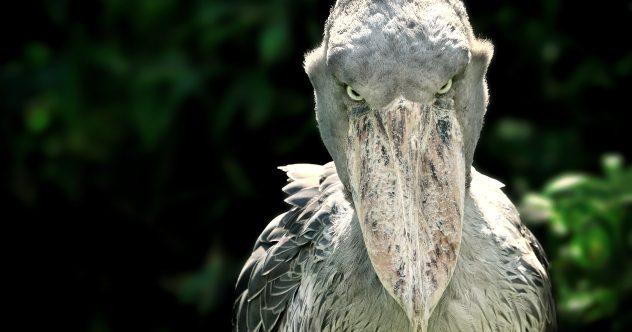 Our world is filled with fascinating creatures. But while some creatures are believable, some have characteristics so inconceivable that we might as well assume they were created by fiction writers. From hideous birds that sound like gunshots to shrimp that strike harder than Muhammad Ali, nature is one unpredictable force. This list of the top 10 species that shouldn’t exist takes you worldwide to show you that anything is possible in nature.

If looks could kill, the shoebill, also known as the whale-head stork, could have you dead in seconds. One crazy-looking foul, the shoebill gets its name from its gigantic shoe-shaped bill that easily earns it the ‘ugliest bird award.’ If we’re being honest, the shoebill stork looks like it was drawn by a child with an overactive imagination and a dark sense of humor.

Scientifically known as ‘Balaeniceps rex,’ the shoebill is a large bird that looks like it could attack at any second. With a specialized bill, yellow eyes, and a five-foot wingspan, the shoebill uses a hunting technique known as “collapsing.” This means that when they set their eyes on prey, they charge at them with a sudden force that eliminates any chances of survival. The technique is especially strange considering they can stay motionless for hours, making them very dangerous to unsuspecting prey.

While the shoebill is mostly silent and uses its cold stare to keep off any predators, it can be noisy too. It’s famous for a call that sounds like machine gunfire. When nesting, they clap their lower and upper jaws to create repetitive bursts that sound like something straight out of WWII. Shoebills use the bizarre call to greet each other but that doesn’t make it any less alarming.

If you always wonder what ‘aliens’ look like, you might want to look at aye-ayes first to get a rough idea. The Madagascan Aye-aye is an endangered lemur that looks like a panda, rat, and raccoon hybrid, something you might see in a sci-fi film. With big eyes, long slender fingers, humongous ears, and a large bushy tail, the aye-aye is one peculiar mammal.

Scientifically known as ‘Daubentonia madagascariensis,’ the aye-aye is a survivor that lives on trees and feeds mostly on insects and worms. With its long, skinny, pointed middle finger, the aye-aye taps on tree barks while listening closely for wood-boring insects. Once it finds its prey, the lemur uses its freaky finger to fish out bugs and devour them for snacks. The bony fingers are also useful for scooping pulp from mangoes and flesh from coconuts.

For protection, the aye-aye never comes to the ground, choosing hideout spots in the forks of large trees. Sadly, given their odd traits and appearance, aye-ayes are seen as an omen of bad luck by locals who kill them on sight. The illegal hunting and destruction of their habitat make the wild a tough place for these mammals.

Australia is home to some peculiar creatures but the duck-billed platypus tops the list for the weirdest species ever. Since their discovery, scientists have wondered how they should classify the platypus. They just don’t fit in anywhere. They lay eggs like a chicken, nurse their young ones with milk like cows, and hunt underwater like seals.

Classified under a group of mammals called monotremes, the platypus are unique mammals that are famous for their egg-laying ability. With the characteristics of mammals, reptiles, and birds, the platypus is easily one of nature’s most adaptable creatures. But while the duck-billed platypus might look weird, its incredible skills are useful for survival in the wild.

The platypus’ babies lick milk from specialized skin that “sweats” milk, providing much-needed nutrition. When swimming in the water, the platypus feeds at the bottom of the murky waters, with its bill acting as an electro sensor for locating buried prey like shrimp. When threatened, male platypus has a venomous spur in its hind legs that works to keep away predators and other males. The females use their tails as the perfect natural incubator for eggs, ensuring that younglings hatch in any weather. So, the mystery aside, the platypus is pretty cool.

The mantis shrimp or ‘Stomatopod’ is one of the most beautiful sea creatures… predisposed to violent outbursts. The vibrant underwater predator is known to have one of the world’s strongest pound-for-pound punches. Studies have shown that they strike with the force of a .22 caliber bullet—a shell-breaking force! You can’t even keep the mantis shrimp in aquarium glass boxes.

There are over 450 species around the world, though this crustacean lives in tropical waters. Whether they’re brown, red, blue, or green, they share the same characteristics as territorial sea creatures that live in coral reefs. Given their striking power and attack styles, the mantis shrimp often target animals much larger than themselves.

To kill their prey, they use spearing or smashing techniques that are both equally deadly. An interesting aspect of the mantis shrimp’s hunting style is that the force it takes to hit their target causes water to vaporize. This means even if the first strike doesn’t kill prey, the sharp implosion of extremely high heat and light that follows will finish the job. On a lighter note, the shrimp can see a wide spectrum of colors that the human eye can’t even process.

6 Horror Frog: The Werewolf of Amphibians

If mother nature ever produced a horror movie, this aptly named horror frog would be the perfect villain. Also called the ‘hairy frog,’ this scary-looking croaker from Central Africa is distinctive for the strands of hair that grow on its back and legs. Yet, the hairy look is not the end of this amphibian’s story. The horror frog is best known for its ability to break its own bones to produce claws in an instant. It sounds like something straight out of a Wes Craven flick.

The frog is a living, breathing assassin. Scientifically known as ‘Trichobatrachus robustus,’ the horror frog’s hind legs are made from bones hidden right underneath the skin. When threatened, the muscles connected to the bony claws contract exposing claws used to strike at the enemy. The claws aside, the frogs get their name from the hairy appearance that plays an important role in the breeding season. Male frogs develop hairy strands to accommodate more oxygen to make up for their small lungs.

In Cameroon, the carnivorous frog is a popular culinary delight for locals. Given their violent nature, spears are used to strike them from a distance, making them a lethal dinner option.

5 Pangolins: A Tough Nut to Crack

The pangolin looks like it’s always ready for war. Its scales might be the most efficient armor ever naturally created, giving this insect-eating mammal from Africa and Asia one tough exterior. Despite their scaly shells, they can roll into a ball when they feel threatened, adding extra protection. When it’s curled up, even a lion or tiger won’t know what to do since it’s impossible to hurt the mammal.

Between its two home continents, there are about eight Pangolin species that belong to the Manidae family. An aspect that makes pangolins extra surreal is that their scales are made from keratin that grows throughout their lifetime. Keratin is a protein responsible for the formation of fingernails and hair in humans. For pangolins, the tip-to-tail scales overlap to create a distinct look.

The axolotl or the ‘Mexican walking fish’ is an adorable-looking amphibian whose regenerative abilities still shock scientists. The axolotl is a salamander that lives in aquatic environments in Mexico where it feeds on worms, insects, and fish. It’s best known for regrowing its organs including the spine, heart, and even some parts of its brain.

Scientifically known as ‘Ambystoma mexicanum,’ axolotls are unique in the amphibian world since they never reach adulthood. Described as neotenic, the axolotl reach adulthood without transforming into adults. This means they never get to live on land like other amphibians. To survive in the aquatic environment, adults have lungs and external gills that give the axolotls their signature cute-face look.

While the axolotls are endangered in the wild, they have become great pet options since they are low maintenance. Their regenerative abilities also make them popular for research. Scientists are trying to figure out whether their unique characteristics can provide medicinal breakthroughs.

Musk deer, also known as the ‘fanged deer’ is a standalone vegetarian with a striking look. Unlike most deer with antlers as their most recognizable feature, the musk deer took the road less traveled. They have long, sharp canine teeth that run past their jaws, just like Count Dracula’s fangs.

The deer that are found in the forests and mountains of Asia belong to the Moschidae family. The grayish-brown deer is adapted for rough terrain and is distinguished by its large ears, short tail, and no antlers. While the fangs look threatening, the male deer only uses them to protect its territory or when breeding to access females.

As their name suggests, the musk deer have musk glands that give out a distinctive scent. They use their musk to mark their territory, which is one of the reasons they’re hunted.

The Kea parrot is a clever parrot with a craving for meat. Despite its colorful wings, it’s one of the most dangerous birds ever. Known for their intelligence and playfulness, the New Zealand kea is a bird that will eat anything, from seeds to insects and maybe a nice juicy steak?

Scientifically known as ‘Nestor notabilis’ the kea can be spotted with brilliant orange wings and a beak that is long, narrow, and gracefully curved. The color and monkey-like antics of the omnivorous bird aside, the kea is notorious for attacking sheep and even killing them. Their love for meat makes them destructive pests to farmers.

The kea are known to burrow into sheep in search of juicier parts, like kidneys. How could a bird be so lovable and dangerous at the same time?

Topping off the list of species that shouldn’t exist is the pitohui, one of the few toxic birds of the world. At first look, the pitohui bird from New Guinea is attractive with a rich chestnut and black plumage. But the pitohui is more than a songbird. Its feathers, skin, and even flesh are toxic.

The bird carries a lethal concoction of batrachotoxin compounds that keep predators and parasites away. Jack Dumbacher, an American scientist discovered that the pitohui gets a dose of batrachotoxins from poisonous melyrid beetles. With the beetles as their primary food source, it’s easy to see where they get their toxicity.

The same compounds that the pitohui have are identified in poisonous dart frogs from South America. The pitohui is one bird you definitely don’t want as a pet.