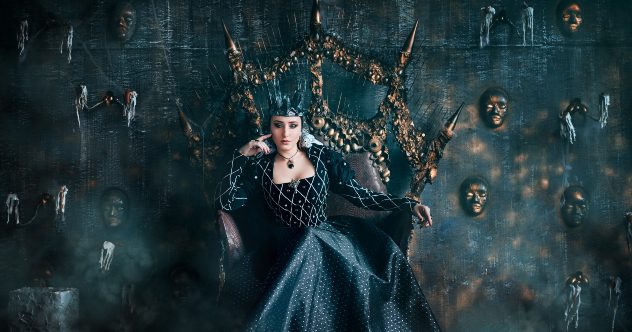 Fairy tales, as sweet as “happily ever after sounds,” were rarely happily ever after. Though, yes, some had these sweet endings, others hinted at darker themes. And evil and creepy characters threatened the well-being of countless fairy tale protagonists.

Some of the creepiest are the women. (Is that a compliment?) And it wasn’t because they looked scary.

Here are the top 10 creepiest women in fairy tales.

10 The Mirror-Loving Queen From Snow White

“Mirror, mirror on the wall, who is the fairest one of all?” asks the Queen.

Before the start of “Snow White,” Snow White’s stepmother, the Queen, was the most beautiful woman in the land. In her efforts to maintain this status, she forces Snow White — the princess — to live the life of a maid. But as Snow White gets older, the young princess’s beauty threatens the Queen’s. The fair lady grows up to be “a thousand times more fair.”

While most people understand that you can’t be “Numero Uno” forever, the Queen instead plots to kill the princess. She even hires a huntsman to get the job done, a plan that ultimately fails. The huntsman frees the princess who goes on to live with the seven dwarves.

Perhaps the creepiest part about the Queen is that she turns herself into a hideous old woman, tries to kill Snow White several more times, and then ultimately succeeds when a piece of a poisoned apple gets lodged in her throat.

Though the Disney film has the Queen meet her end by falling from a cliff, the fairy tale has a much darker ending. Snow White is eventually revived and tricks the Queen into attending her wedding to the prince. There, she is forced to dance in red-hot iron shoes until she dies.

The Cinderella story dates back to ancient Greece, but the ones we refer to here, as interpreted by Charles Perrault and the Brother’s Grimm, are perhaps the most popular versions.

Each makes it very clear that the stepmother sucks.

She abuses Cinderella after Cinderella’s father passes and overworks her with a mountain of chores. As if that’s not enough, she forces Cinderella to sleep on a lumpy mattress while her children sleep in soft beds surrounded by mirrors. The family even nicknames the orphan “Ashfool” in the Brother’s Grimm edition because she sleeps among the ashes.

After the prince declares a three-day celebration, Cinderella begs to go. But, in Brother’s Grimm, the stepmother instead throws a bowl of lentils into the fireplace. Cinderella must pick up each one. Only then can she go to the ball.

Fortunately, things get better for Cinderella. In the Perrault version, she forgives her stepsisters, who then marry noblemen. But Brother’s Grimm is very dark.

The stepmother urges her daughters to cut off pieces of their feet to fit in the slipper. And then pigeons pluck out their eyes.

8 The Cunning Sea Witch In The Little Mermaid

If you thought the surface was evil, you’ve never lived in the underwater kingdom that is “The Little Mermaid’s” home. In this fairy tale, the little mermaid is a dreamy young mermaid who wishes to be human. She wants to marry a prince and have a soul so she can live forever in Heaven. To achieve her goals, the innocent girl seeks help from the Sea Witch.

After their interaction, the Sea Witch convinces the little mermaid to trade her tongue for a pair of human legs. As if taking the little mermaid’s enchanting and beautiful voice is not enough, she adds loopholes to their deal.

The Sea Witch’s potion hurts like a sword, and when the girl walks with her new legs, it’s like walking on knives! Also, the deal depends on the condition that she marries the prince alone, and if not, she is doomed to die brokenhearted.

Only a truly evil woman would conjure up such a complicated curse.

7 The Selfish Witch From Rapunzel

Rapunzel centers on the life of none other than Rapunzel herself. Kidnapped a young age, she has been kept in a tower by an evil witch who climbs it using Rapunzel’s incredibly long hair.

The fairy tale starts with an altercation between a man that seeks to steal fruit from his neighbor. When the man is caught, he agrees to the evil witch’s deal that he can take the sweet rampion fruit in exchange for his first child. Or else, he would turn into a pig! Not the best deal but he agrees because he’s scared. After Rapunzel is born, she’s exchanged and so begins her life in the tower.

During her stay there, the witch keeps the girl for herself. After discovering Rapunzel’s affair with a prince, the witch cuts her long hair. This causes her misery in the tower.

As if Rapunzel’s suffering isn’t enough, the witch makes the prince fall into thorny bushes, blinding him. In the story, the witch ensures that life becomes miserable for everyone that crosses her path!

6 The Bitter Maleficent In Sleeping Beauty

In fairy tales, the birth of a royal child brought the kingdom together. But in “Sleeping Beauty” it created chaos. In the story, the king and queen give birth to a daughter. On her christening day, everyone gets an invite.

But as they invite the fairies, they forget about one old witch called Maleficent.

After arriving at the party, she notices that there are only 12 plates, instead of 13 for the fairies. So, rather than bless the child, she furiously curses her. She will prick her finger on a spindle when she turns fifteen and shall die. The last fairy tries to counter the spell, wishing she only sleeps for 100 years.

Even after the kingdom abandons all spindles, the princess eventually pricks her finger and falls into eternal sleep. The fact that Maleficent would curse an innocent child to die for a mistake that she didn’t make is creepy.

5 The Stuck-Up Princess From The Frog Prince

Classical fairytales were altered so modern creators like Disney could tell completely different versions of the story. “The Frog Prince” is one of those stories. Unlike Tiana, the princess in the original Brother’s Grimm tale is not adorable or worthy. She’s a stuck-up girl who doesn’t honor her word.

“The Frog Prince” starts with the princess playing next to the river where she loses her precious golden ball. As she cries pitifully, a frog comes up to her to aid. After a bargain, the princess promises to give the frog anything if she gets her ball back. Sadly, she betrays the frog as soon as she gets what she wanted.

After the frog demands its due, the princess begrudgingly accepts. She despises the frog and only cooperates half-heartedly. The next morning, the frog asks for a kiss as a parting gift and the girl is happy to get rid of it.

But when the frog turns into a beautiful young man, the princess begs him to stay. She entirely forgets how mean she was. She only loves the frog now that he is a handsome man.

4 The White Witch From The Chronicles of Narnia

C. S. Lewis’ book series, “The Chronicles of Narnia” was an instant classic for its fairy tale features and wild characters. One of these characters is Jadis aka The White Witch. The White Witch was the creepiest character in all of Narnia. As a sorceress, she always had an evil scheme.

Like most witches, Jadis is merciless and power-hungry and after usurping the throne from its royal family, she took it for herself. After becoming the ruler, she places a curse that makes winter the only season in Narnia. Her evil nature is even more fearful in her readiness to turn anything into stone using her wand.

The white witch’s curses and treatment of her subjects make her the ‘coldest woman’ in all of Narnia. Her cruelty gradually drives the people to revolt against her rule.

The Little Red Riding Hood is a most popular fairy tale. But if we read between the lines, some things don’t add up. As much as it pains to admit, Little Red is kind of a creep.

For starters, she travels to visit her grandmother deep in the dark forest on her lonesome. That is not a trip that most people wouldn’t even attempt. Second, it’s doubtful that any parent would let their child travel to the woods alone to see their grandma.

Even the grandmother herself won’t approve.

In some versions, Little Red befriends the wolf and even lets it eat the grandmother. This Little Red hopes to inherit grandma’s property. To eliminate witnesses, she kills the wolf too. ‘

Little Red is no ordinary little girl. She’s up to something in that bloody red cap!

2 The Cannibalistic Witch In Hansel And Gretel

All children love sweets and as Hansel and Gretel found out, not everyone giving you a treat wants to treat you right. In “Hansel and Gretel,” the two children get lost deep in a forest and end up in a house made of sweets. The woman behind this magnificent trap is a witch who loves to find and eat children!

Hansel and Gretel meet the witch of the forest when they stumble on a house made of bread, cake, and sugar. Given that they are hungry, the two kids have no choice but to eat the house. They are so innocent they even say “Grace” before enjoying it!

After nibbling at the house for a bit, the old woman invites them in. They are hungry and this woman has milk, pancakes, nuts, and apples. Is this heaven?

But once the children get comfortable, things get creepy, real fast! She only built the house to attract kids and after catching them, she fattens them up for slaughter. Hansel is caged up and fed so that he would be plump.

The cannibalistic woman’s diet was really creepy and her death is the truest justice in the history of all fairy tales.

1 Notorious Baba Yaga aka ‘The Bony-Legged One’

Most fairy tales originate from German and English writers, but the Russians have one of the creepiest tales ever. The creepy woman is an old witch named “Babe Yage” or Baba Yaga in this folk story.

The story starts with a widower and his daughter who live happily in their hut. But after the man marries, the stepmother who deserves her own “creepy woman” mention starts mistreating her. One day, the step-mom sends Natasha to her sister, a witch called Baba Yaga, the bony-legged one.

Baba Yaga is not your classic witch. Her spookiness starts with her living in a hut that stands on giant hen’s legs! Once Natasha arrives at the creepy house, she meets a woman with iron teeth. Using her wits, Natasha manages to escape the house only to be chased by the relentless Baba Yaga.

In their dramatic chase, Natasha outwits the witch at every turn, but she never forgets that she wanted to eat her. These witches sure had a big appetite for young kids. So tasteless!