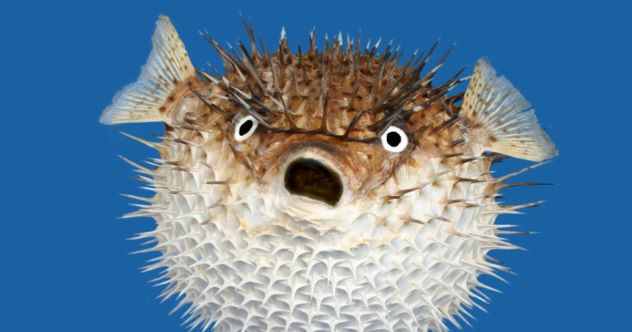 Plants and animals all over the world have spent their entire evolutionary life span developing toxins and poisons that keep them safe. Plants refusing to be eaten produce poisons to keep animals away. Fish and fauna alike bite, spit, or ooze toxic chemicals that either keep them safe from predators or make them more efficient hunters. Then humans came along.

Having no potent toxins of our own, we began studying and figuring out the various uses of the poisonous world around us. Many times, we used our toxic friends to harm others. But these days, we are finding more and more ways to use those deadly properties to help our fellow man.

Related: 10 Foods We Eat That May Lead To Poisoning Or Death

Pufferfish have a terrifying poison called tetrodotoxin. This poison, if eaten, can kill at an alarming speed. Nothing about the pufferfish’s poison will damage any part of your insides. Instead, it is designed to shut down your body via paralysis. Tetrodotoxin simply blocks your nerves from talking to each other. If they can’t do that, then, well, you can’t move. If your nerves aren’t telling each other that it is time to inhale, guess what you’re not going to do? Scary right? Death by paralysis, not a way that I would want to go.

Luckily, scientists have found that the nerve-blocking properties can be used as a pain killer if extracted and administered properly. Patients being treated for cancer have probably been given a pain killer with tetrodotoxin in it. Pufferfish aren’t just helping cancer patients. Their naturally produced poison has shown promise in helping patients with a whole host of issues. Low doses have been proven to help heroin addicts kick their cravings. It’s been used in anesthesia and has been looked at to help patients with certain neurological disorders.[1]

Ticks are the last creature that I would consider to be helpful. They bite, attach themselves to you, and suck your blood. Who wants that? They even spit into us. That’s right. Ticks will bite you, then use their spit to go undercover, so our immune system doesn’t attack them. It also helps our blood flow easier so that they can slurp up as much blood as quickly as they can while allowing their spit to be swept away into your bloodstream with who knows what kind of illness inside of it. Now, if you’re like me and hate backwash of any type, ticks are the worst. But if you’re a scientist. Ticks can be little helpers.

Tests are still being done, but if you have asthma, there might be a future where you’re breathing is relieved by tick spit. The anti-inflammatory parts of a tick’s saliva that help it feed can also help your lungs not become so inflamed. Other proteins in tick spit have been shown to assist with cancer treatments and other therapeutic drugs. I’m still not a fan of chemically charged spit, but at least the medical world is starting to peel back its uses.[2]

Sea Anemones are silent and very slow hunters. I personally don’t live near the ocean, but I have visited and am always delighted by the colorful flower-like creatures hanging out in the tide pools. Pretty to look at, sure, but not nice to touch. Those wavy little “petals” are actually hunting tools that house tiny barbs just ready to grab and inject you or any passing fish with their poison. For small fish, the toxin can kill, but for others, it simply paralyzes them so the anemone can get a good grip in order to feed.

Now scientists love a good poisonous creature and have been busy teasing out the many uses of sea anemone toxins. So far, they’ve been testing its uses in patients with autoimmune diseases like multiple sclerosis and arthritis. And that is only for one type of toxin the sea anemone produces. Some research has revealed that sea anemone toxins may also kill cancer cells. Scientists are still teasing out new proteins in an anemone’s poison that could have positive effects on people like you and me.[3] 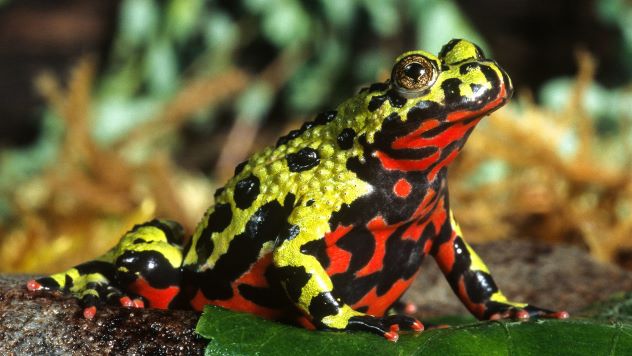 It is strange to think that humans look at a creature known to be poisonous and say, “Yeah, I want that as a pet.” Fire-bellied toads are a relatively common pet in the United States, even though the toxin covering their skin can cause pretty nasty effects. A lot of poisons need to get into your body in order to harm you, but this toad’s toxin can hurt on contact. If you get it in your eyes or on your skin, you can get hives or itchiness. Also, your eyelids can become swollen, along with the pain that comes with getting the poison in your eyes. Why have a pet you can’t cuddle? I have no clue, but please don’t try to cuddle these bright toads.

Now no one wants to touch a frog that makes your skin itchy. But know what else doesn’t like the toad’s poison? Tumors. Tumors do not like frog poison, and there have been many positive results in using fire-bellied toad toxins to help stabilize and treat a wide variety of cancers. A component of the toxin, bombesin, binds to the receptors of certain tumors, stabilizing them. So don’t rub it on your skin, get it to attack those nasty tumors.[4]

Many plants have also developed a wide range of poisons to protect them from being munched on. Yew is one of those plants. The leaves of a yew tree are poisonous, and many innocent farm animals have become victims to the tempting greenery of the yew tree. The poison can cause vomiting or diarrhea, difficulty breathing, and convulsions. In other words, do not put random plants into your mouth. They may fight back.

Yew is used in chemotherapy to help fight cancer. The cocktail of chemicals that make up the poison has been shown to help stop new cancer cells from forming. It’s one thing to get rid of existing cancer cells, but the fear is that the cancer may come back. Chemicals in the needles of the yew tree block cancer cells from dividing, thereby increasing the size of cancerous tumors.The Yew trees, though poisonous if used incorrectly, have been instrumental in saving lives.[5]

So, we all know that getting stung by a bee is not fun. It hurts, and for people who are allergic, it can be deadly. But, even if you’re not allergic, there is a limit to how much bee poison you can take before the little flower hunters kill you. I never really thought about a bee sting being poisonous. I used to think that it hurt because a sharp needle-like thing was being stabbed into me by an angry bug. But no, that ongoing pain is poison.

Bees have been studied for a long time for their health effects. The properties that make up the bee’s venom have been shown to help patients with arthritis, lupus, sciatica, and low back pain. The toxin in bee’s venom also has some potential in helping fight Lyme disease and HIV. The list goes on, but the fact that you can get something called bee venom therapy to help with a variety of health problems is astounding. Of course, if you’re already allergic, don’t go asking your doctor to inject you with the stuff. That would probably make things worse.[6] 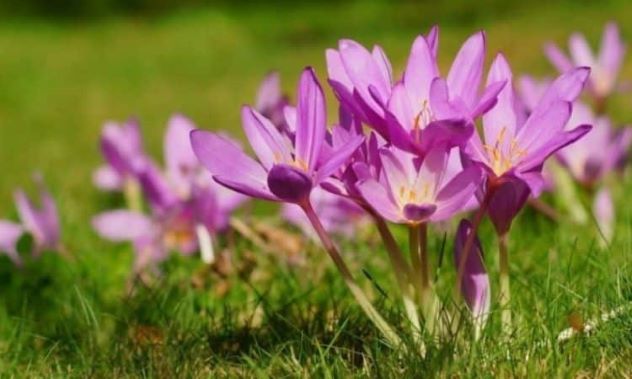 Yet another plant that kills but heals once scientists get their hands on them. Colchicine is the toxic element of the Autumn Crocus (Colchicum autumnale). Eating any part of this pretty plant can cause severe stomach pain and vomiting that could end in kidney failure, along with a host of other adverse effects. These flowers are the definition of look but don’t touch.

The medicinal properties we humans have pulled from the crocus plant have been used for years on end. The most common one is to help with gout, which is a form of arthritis. As scientists research the crocus plant’s poison, they are coming across a wide variety of uses for it medicinally. One of the up-and-coming studies is in dermatology. The cases are few and far between at the moment, but various treatments are coming to the surface.[7]

No, not the little clovers on your lawn that you dig through in hopes of finding one with four leaves. This clover is taller with yellow flowers and, if left out too long, it gets moldy and can poison your animals. The mold actually changes the coumarin found in sweet clover into dicoumarol, which is toxic. Sweet clover thins the blood and can cause anemia, rapid heart rate, and hemorrhaging. Moral of the story? Only feed sweet clover if it is alive and fresh or completely dry and free of mold.

Because sweet clover is known to thin the blood. It has been used to treat various issues involving blood clotting disorders or conditions. Some things that sweet clover is used for are reducing varicose veins, hemorrhoids, and helping with poor blood circulation. It also led to warfarin, used to treat strokes, heart conditions, and deep vein thrombosis. All experts have warned against using the drying, moldy leaves as that are when things get poisonous.[8]

Lionfish are not only venomous to humans but also a danger to the entire ecosystem that they live in. Those pretty, decorative spines on their back are not just for looks. The toxins inside of them will target your nervous system if they get the chance. That sting can cause swelling, pain, and even paralysis if it gets you, and who wants to experience paralysis when swimming in the ocean? Not me!

For as invasive as these fish are, their numbers are a good thing. Scientists have an abundant supply of these guys that are helping them search out the good in all of that poison. Like many of the other toxins on this list, lionfish venom has a promising effect on cancer cells. And the natural antioxidants found in the cocktail have the potential to help replace some of the synthetic stuff currently in our food and drugs. Like most research, it is ongoing and will need to be done and redone in order to perfect the usage of this potent toxin.[9]

Even ants have venom; all species in one capacity or another carry some form of toxin. Not many out there can kill a human, but most all hurt. Fire ants sting with a vengeance and in numbers, leaving you with a bunch of painful and itchy blisters that could get infected if you scratch them open. If you’re unfortunate enough to be allergic to fire ant stings, you could have similar symptoms as those with bee allergies, including anaphylaxis.

Fortunately, science is finding ways to make even ant venom work for the human race. Fire ant venom, in particular, has been shown to work as an anti-inflammatory, and more specifically, it could be used in treatments for the autoimmune disease called psoriasis. Tests are still being run, but I’m a fan of any toxin that can be used for good.[10]