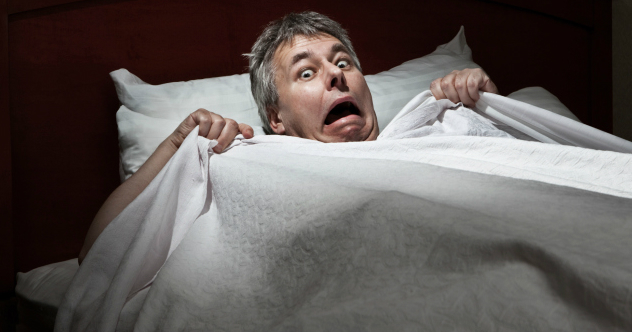 Have you ever woken up to feel an eery presence in your bedroom? Do you believe that you’ve been abducted by aliens or visited by a withered old crone or a humanoid cat figure during the night? Is it normal for you to wake up unable to move, speak, or breathe? If you answered “yes” to any of these questions, you might have experienced sleep paralysis.[1]

In recent years, sleep paralysis has started to move out of the shadows—no pun intended—and into the forefront of people’s minds. Researchers have now conducted a number of studies into this phenomenon, and the topic has even become the subject of several humorous memes.

Related: 10 Things Sleepwalkers Do (Other Than Walk In Their Sleep)

Many scientists have pointed out the similarities between sleep paralysis and “alien abduction.” And anyone who has experienced a sleep paralysis episode will likely agree.

Sleep paralysis can cause intense visual and auditory hallucinations. A typical experience is to wake up and realize that you can’t move. You may then start to sense a strange presence in the room, and this may be followed by buzzing and humming sounds, bright lights, and a sensation of pressure on your chest or prodding at your limbs.

Sleep paralysis hallucinations can feel extremely real, so many people who experience them wake up truly believing they’ve spent the night on board a spaceship.[2]

In Canadian Inuit folklore, the predominant belief is that sleep paralysis results from the spells of shamans. Those spells, they say, prevent human movement and implant in the minds of those affected hallucinations of a formless presence.

In one study, most respondents from this culture recognized sleep paralysis as either “uqumangirniq” or “aqtuqsinniq.” Those who believed in the state of uqumangirniq said that people’s souls were more “vulnerable” during sleep. During this period of vulnerability, they say, shamans or malevolent spirits are more able to attack the soul, thereby causing sleep paralysis.

The researchers noted that the respondents’ perception of sleep paralysis as an experience of “supernatural power” reinforced their belief in the spirit world. But is that belief what invited such malevolence into their lives in the first place?[3]

Broken down into its literal Japanese meaning, kana means metal, and shibari means to bind: “to immobilize as if bound with metal chains.” (Remember, when people wake up in a sleep paralysis episode, the first thing they often become aware of is that they are unable to move.)

The spell kanashibari no ho was a form of paralysis magic, which priests of Onmyodo Shugendo are said to be able to attain with extreme self-discipline and by refraining from all forms of indulgence.

According to some texts, those who were able to practice this paralysis magic often used the kanashibari no ho spell to remove evil spirits. This is somewhat ironic, though, given that many people who experience sleep paralysis are often met with what they consider to be evil spirits…[4]

Though many sleep paralysis sufferers are faced with shapeless forms and nameless entities, in some cultures, the entity that invades so many people’s dreams has a name. And in Brazil, it is known as the Pisadeira. In Portuguese, this term translates to “she who steps.”

Many pieces of literature on the topic describe the Pisadeira as a crone. True to the Portuguese translation of her name, this crone is said to lurk on people’s roofs during the night. And when she finds a sleeper who has gone to bed on their back and on a full stomach, she enters their room and stamps on their chest.

This is interesting for a couple of reasons, the first being that sleep paralysis usually causes sleepers to experience a feeling of compression in the chest area. Another reason is that sleep paralysis most often affects those who sleep in the supine position or on their backs. Could there actually be some weight behind this belief?[5]

“The Old Hag” is another common name for the sleep paralysis demon, and this term for the phenomenon is thought to have originated in Newfoundland.

Like the Pisadeira, the Old Hag is a crone-like old woman who sets out to make sure that sleepers are unable to breathe, move, or call for help by sitting heavily on their chest in the night.

The origin of this belief can be traced back to the 1890s when the Journal of American Folklore published a short article about the phenomenon. And to this day, locals are still careful never to sleep on their backs. Because if they do, it leaves them unprotected from the Old Hag, who uses the cover of the night’s darkness to invade the bedrooms of so many innocent sleepers.

Scientists say that the experience is down to brain activity (more on this later), but for many Newfoundlanders, the horrors of being visited by the Old Hag are all too real for them to believe that it is all in their head.[6]

5 A “Glitch” During REM Sleep

Scientists in much of the Western world have attempted to dispel many of the folkloric beliefs on this list by presenting us with a much less outlandish explanation for the horrors of sleep paralysis: an imbalance of neurochemicals in the brain.

During random eye movement (REM) sleep, the brain releases chemicals to paralyze the body and prevent people from acting out their dreams and harming themselves in the process. But sometimes, a glitch in this process means that the brain is able to wake a person up while their body remains stuck in paralysis mode.

At this point, a person becomes conscious, but the dreams they were having while in REM sleep continue to play out. And instead of taking place inside their head, those dreams are now taking place before their very eyes…and they are not usually pleasant ones.[7]

As if a crone invading your room in the dead of night wasn’t creepy enough, imagine having a demonic entity invade your mind, body, and soul. This is what happens in possession, and sleep paralysis experiences have been linked to possession for centuries.

During the Christian era, the friends, relatives, and neighbors—not to mention the local religious leaders—would pray for the souls of those who experienced this apparent possession. Exorcism, during which malevolent spirits are forcibly evicted from the body believed to be possessed, might also have taken place.

This is without doubt one of the most disturbing sleep paralysis theories out there; we can usually wake from a slumber, but possession leaves us absolutely powerless.[8]

If you’ve ever seen Aladdin, you’ll know that the genie is a loveable character who will do anything he can to help the eponymous hero in his quest to marry Princess Jasmine. But according to Egyptian folklore, genies aren’t always so generous.

The term “genie” is the anglicized version of the word “jinn.” And in Egypt, the Jinn is said to be a spirit-like entity that “torments” people when their bodies are in the state of paralysis that REM sleep causes.

But the Jinn doesn’t only haunt people in their dreams. So intense is the fear of this character among Egyptians that they may actually be more likely to wake up in the middle of REM sleep. And conversely, as we already know, this only invites evil in…[9]

2 “The Ghost That Pushes You Down” (Cambodian Folklore)

We’ve covered genies, hags, crones, demonic entities, and magic in this list, but we haven’t yet touched on possibly the most common paranormal trope: ghosts.

Cambodians and other Southeast Asian cultures widely believe that their sleep paralysis episodes are the results of visitations from ghosts. But not any old ghosts…specifically, “ghosts that push you down.”

According to some literature, this belief has its roots in the conviction that people experience sleep paralysis, not because of poor health or a “glitch” in the brain, but due to how lucky (or, let’s face it, unlucky) they are.

This piece of folklore shares a common theme with many other cultural beliefs covered on this list: that there is a sense of being pushed down, pinned to the bed, or trampled on during sleep paralysis. Science seems to explain why we hallucinate and cannot move, but what explanation does it have for this?[10] 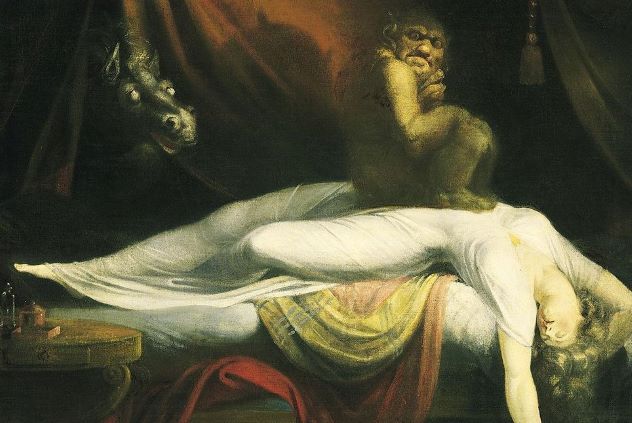 In some regions of Italy, notably Marche and Abruzzo, people characterize sleep paralysis as an attack by the Pandafeche.

Reports given in studies suggest that the Pandafeche can take multiple different forms, each as terrifying as the last. Some people report seeing a witch or a crone, while others say their night-time visitors remind them more of ghosts or spirits. Oddly, some Italian sleep paralysis sufferers explain that the Pandafeche presents to them as a frightening cat-like entity.

Although descriptions of the Pandafeche figure seem to vary, people seem to agree that the only way to prevent an attack by this horrifying creature is to leave a pile or a bag of sand somewhere near the sleeper’s bed. The theory goes that the Pandafeche will always stop to count how many grains of sand are present and thus delay their attack.

This raises an interesting question: Are there any other forms of distraction that could help ward off the evil that seeps in when sleep paralysis strikes? If so, let’s hope we find them—and soon. After all, nobody wants to wake up face to face with a demon, do they?[11]