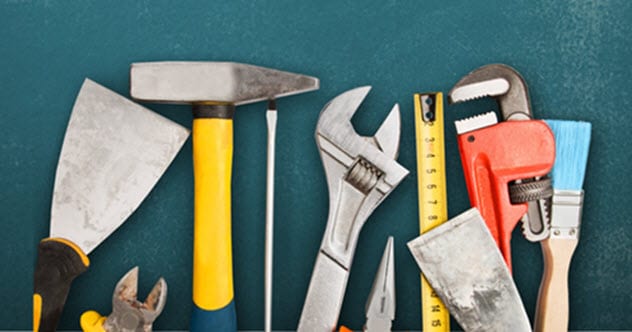 When you hear the word library, you probably imagine rows and rows of books. But did you know there are all kinds of libraries dedicated to lending things other than reading materials? From musical instruments to live human beings, you can borrow anything these days if you know where to look!

Related: 10 Lost Libraries And The Mysteries Of Their Contents

Ever needed a specific tool for just one project? Enter the tool library, where community members can borrow power drills, hedge trimmers, ladders, and even jackhammers. The first tool library was established in Columbus, OH, in 1976. Today, it lends over 4,800 tools to those who can’t or don’t want to fork out hundreds of dollars for expensive tools they only need once.

Since then, similar services have sprung up around the world to help neighbors share resources and get their projects done. So next time you need a drain snake or a reciprocating saw, try your local tool library![1]

Kids grow up so fast and grow out of their toys even faster. That’s where toy libraries come in—to give old toys new life or even prevent them from being purchased in the first place. Often part of a larger traditional book library, toy libraries allow kids to borrow toys, saving parents cash and keeping a lot of plastic out of landfills.

The oldest continuously operating toy library is in LA County. It was started in 1935by a store owner who noticed kids stealing toys and decided to do something about it: lend them out for free. The program now serves 35,000 children each year, giving them access to the most vital childhood resource: play.[2]

U.S. readers can find their local toy library or check out the International Toy Library Association.

Want to learn the ukulele? The Musical Instrument Lending Library in Brooklyn has eight you can borrow, along with guitars, cowbells, and steel drums. Another, the “M.I.Brary” in Lafayette, can even hook you up with an accordion! The latter was founded by Dr. Ryan Cazares, who wondered “if there’s a Grammy award winner sitting right here with us, but they don’t even know it because they don’t have the money to purchase an instrument.”

These public services offer anyone the chance to learn a musical instrument or even just try a few to see what sticks, helping make the world a more musical place.[3]

Getting outdoors is great for all ages, but camping, hiking, and backpacking gear can add up to hundreds of dollars before you even leave the house. That’s why gear libraries exist to loan equipment to more casual adventurers.

Families in Nature runs one such library in Texas and can kit out at least 100 campers at a time in tents, sleeping pads, backpacks, and headlamps—everything they need to get outside and explore. The Mountaineers’ gear library in Washington even has winter sports equipment like skis. It aims to make outdoor recreation more accessible and inclusive, especially for struggling or underserved communities.[4]

Gear libraries are a fantastic resource to help get communities outside and enjoy the environment as much as possible!

If you’ve got a dusty old puzzle sitting in the cupboard, consider donating it to a puzzle library, where jigsaw enthusiasts get their fill. At the online Jigsaw Puzzle Swap Exchange, members have enjoyed over 6100 puzzle swaps. They are able to request specific puzzles or fill out their preferences to receive puzzles that match their interests.

Many puzzle libraries have grassroots origins, like the one Allegra Jabo started in Arlington. Her Douglas Park Little Free Puzzle Library started in her home entryway during the pandemic, where she lends out over 300 puzzles donated by neighbors. She is now looking for a permanent location to house the library. Others operate in private Facebook groups or out of community centers and are always thrilled to welcome new members![5]

A source of both education and nutrition, in a seed library, gardeners “borrow” seeds at planting time and save a portion of the seeds from the plants they grow to return for future gardeners to use. For many seed libraries, the goal is to preserve local biodiversity by collecting rare and heirloom varieties that are not widely available.

The Global Seed Vault in Svalbard uses thick rock and permafrost to preserve backups of over a million crop seeds varieties, safeguarding the world against the extinction of important food sources—but it is only accessed if disaster strikes. In the meantime, local seed libraries keep varieties in circulation, promoting ongoing evolution as varieties adapt to thrive in the area. Kids can learn where their food comes from, and avid gardeners can help maintain the plant diversity in their neighborhood.[6]

See the list of seed libraries around the world!

Another popular pandemic pastime, board game libraries provide communities with a fantastic social resource. There are too many games out there for any one family to own them all. Board game libraries can bring together players across different backgrounds and languages (with language-independent games like Qwirkle) to foster a sense of community and cooperation—or just so everyone can gang up on Nanna.

Some game libraries let you take the board games home, while others provide a pay-to-play program onsite and charge an hourly fee. Librarians are even getting clever with 3D printers to replace lost or missing pieces, so the games never have to end![7]

Calling all bakers! The Puratos Sourdough Library in Sankt Vith, Belgium, houses sourdough cultures from all over the world. More than a hundred bakers from over 23 countries contributed samples to this effort to preserve a slice of their heritage. An additional 2,501 starters are registered online, and lab tests of the cultures in Belgium have revealed over 1,400 strains of wild yeast and lactic bacteria!

It was started in 1989 by bakery supply company Puratos, and the collection has continued to rise—pun intended. All samples must come from a spontaneous fermentation (not a commercial starter). The sourdough cultures are kept in mason jars in a carefully controlled environment and refreshed with their original flour every two months to preserve this sourdough heritage for future generations. Dough librarian Karl De Smedt has described the bubbling concoctions as “nothing less than history.” There’s only one sourdough library so far, but you can tour some of the library’s collection virtually.[8]

“Don’t judge a book by its cover” has never been more true than at the Human Library or “Menneskebiblioteket” in Copenhagen, Denmark. There, the human “books” are volunteers who come from a stigmatized part of the community, like someone with autism, a naturist, or an extreme body modder. The not-for-profit library offers visitors the opportunity to sit down and dialogue with someone they might not understand. The library hopes to challenge prejudice and foster a more inclusive society.

Since it welcomed over a thousand visitors during its opening week in 2000, The Human Library has expanded activities in over 80 countries around the world. So next time you’re struggling to understand somebody’s perspective, why not borrow them and ask? They’re even developing an app![9]

Libraries of Things exist throughout the world, from the Sharing Depot in Ontario to the Leila in Berlin. Rebecca Trevalyan, the founder of one such library in London, said, “we were students in London, living in tiny houses without much spare space, and not a lot of disposable income… We didn’t need to buy and own sewing machines and drills and lawnmowers and sound systems, but we did need them now and then, and it would be great to be able to access them.”

In this way, libraries of things do more than just save people money: they build a sense of community by creating a pooled resource and letting neighbors share what they need, whether that’s a lawnmower or just a helping hand. These libraries also have an environmental impact, much like many others on this list. No wasted money, nor discarded or leftover items ending up in a landfill.[10]

Libraries provide vital resources to the communities their serve, and not just in the form of books! Whether you need to borrow a ten-person tent, rainbow carrot seeds, or even a new perspective, there’s bound to be a library that can help you out. Have you visited any of these unusual libraries? Now that you know what’s out there, what will you borrow next?