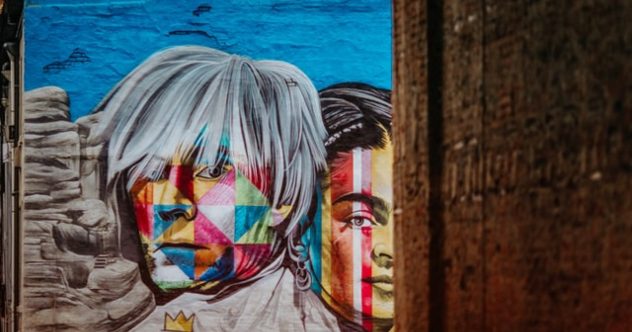 Writing a list about Andy Warhol’s weirdest habits is like writing a list of Chris Hemsworth’s most drool-inducing muscles; there are way too many to choose from. But the way that Andy Warhol lived, you get the feeling that he wanted to fill a whole series of bizarre lists. From the moment he burst (and that’s an understatement) onto the New York City art scene to his last moments on Earth, the painter/filmmaker/airplane-menu-collector did all he could to redefine eccentricity constantly. As a tribute to the man who so expertly courted curiosity, here are ten of the most bizarre facts about Andy Warhol.

Related: 10 Artists Who Destroyed Their Own Work

Andy Warhol was notoriously fickle. To close friends, colleagues, and strangers alike, the pop artist could be any number of different Andy’s depending on the moment and the mood. The problem is that Andy’s fluidity was so pervasive that his close friends and collaborators went beyond the trite “Dr. Jekyll and Mr. Hyde” comparison and created their own dichotomy. They went with Dracula and Cinderella and so gave Warhol the nickname “Drella.”

Though Warhol was open about his dislike for the name, he nonetheless embraced it at times, even naming his persona Drella whenever he dressed up in drag. After Warhol’s death, his friends Lou Reed and John Cale of the Velvet Underground reunited for the first time in almost 20 years to record a tribute album. They named it “Songs for Drella.”

Though Warhol never married, and by most reports, never even had a relationship that wasn’t “brief” and “abstract,” he did often claim to have a wife. The wife in question wasn’t a human woman, nor any person for that matter; it was a tape recorder.

For years, Warhol’s carried his wife with him everywhere he went and taped nearly every moment of his life. Sometimes he used his wife to record his thoughts as an audio diary. Other times he used it to record every one of his conversations, whether public or private. And sometimes, Warhol even left the tape recorder running despite no words being spoken. He recorded hundreds of hours of ambient noise from the various settings of his life.

8 He Was a Devout Catholic His Whole Life

For the average American, finding out someone was a lifelong, devout Catholic would not be surprising or controversial in the least. For Warhol, the openly gay shock artist who housed drag queens and painted with pee, his Catholicism is a surprise.

Warhol’s parents were traditional Eastern European immigrants who raised the future artist Catholic. No matter how untraditional his life would later become, he never stopped believing nor practicing. As part of his eulogy for Warhol, biographer John Richardson said that the artist “could on occasion be an effective proselytizer. To my certain knowledge, he was responsible for at least one conversion. He took considerable pride in financing his nephew’s studies for the priesthood. And he regularly helped out at a shelter serving meals to the homeless and hungry.” He added, however, “Trust Andy to have kept these activities in the dark.”

Knowing that Warhol recorded almost every minute of his life for years, perhaps it’s not surprising that he also dabbled in hoarding. Still, unlike his “wife” period, Warhol’s habit of obsessive collecting was no passing phase. Instead, the artist continued amassing box after box of seemingly random objects right up until his death.

The practice began ordinarily enough. At one point, Warhol started keeping boxes of his receipts, letters, and other papers⁠—a new box of papers each month. But the boxes quickly ballooned into something wilder and less practical. By his death, Warhol had amassed 641 boxes labeled “Andy’s Stuff.” They contained hundreds of cookie jars, pornographic novels, crucifixes, Navajo blankets, the aforementioned airplane menus, and much much more.

6 His Iconic Bowl-Cuts Were Fake

When it comes to his appearance, Warhol was most famous by far for his short, choppy, silver hair. Combined with his trademark horn-rimmed glasses, the hair created Warhol’s signature style, one that barely changed throughout his life. The thing is: it wasn’t real.

Warhol started balding in his early 20s, and although that is nothing to be ashamed of, the artist evidently had a look in mind which didn’t allow for baldness. He began collecting and regularly wearing wigs, and in true Warhol fashion, he went big. He amassed over 40 of the hairpieces. Each was hand sewn and crafted from imported Italian hair. He even had hairdressers trim the wigs so he could alternate short and long, creating the impression that the hair was growing.

5 All the Other Jobs…

Everyone knows Andy Warhol as a painter, and with good reason. Many art historians consider him one of the most successful and influential painters in history. But Warhol wasn’t just a painter. He wasn’t just anything. Instead, Warhol tried his hand at absolutely everything.

Warhol coauthored a cookbook named “Wild Raspberries.” He managed and produced the Velvet Underground. He produced three television shows. He shot both short and feature-length films. He sculpted, photographed, staged performance art pieces, and even wrote a play titled Pork based on some of his many audio recordings. Maybe the weirdest of Warhol’s ambitions, though it never came to fruition, was his plan to open a series of vending machine restaurants named “Andy-Mat.”

4 …And His Best Role Ever

Though he did a lot in his life, one of Andy Warhol’s greatest contributions to culture has to be his talk show, Andy Warhol’s Fifteen Minutes. The show aired on MTV from 1985 to 1987. In those two brief years, he managed to produce some of the most confusing content in television history. What else would you expect from him?

Part of what makes the show confusing is what you’d expect from the provocateur: experimental art pieces, unusual edits, and non-sequitur segments that combine to create a carnival of oddities. However, the show is even more confusing because, amid all the strangeness, it snuck in some legitimately insightful interviews. He often had his guests dress up or act out their interviews in elaborate sets, and it had the odd effect of eliciting something deeper than the standardized interviews of most late-night talk shows.

Some artists can’t get away with using pee in their art (see Andres Serrano), and some can. Andy Warhol could.

In the late ’70s, Warhol began exploring abstraction in his art in a major way. He tried several unusual mediums and techniques during this period, but none was more experimental than his “Oxidations” series. For these works, Warhol would slather canvases with iridescent copper paint. To add color and texture, Warhol would then invite his friends to pee on the canvas.

The chemical reaction produced by the uric acid and the copper caused the paint to bubble and clump up. It also created an impressive range of colors without needing to paint them, such as reds, browns, blacks, blues, and greens. Apparently, the variations in color and texture were created by differences in diet and fluid intake.

On June 3, 1968, a mentally ill colleague of Warhol’s named Valerie Solanas shot him in the chest, attempting to kill him. Solanis is best known, besides attempting to kill Warhol, for writing the “SCUM Manifesto,” a piece based in radical feminism. Her justifications for the attack were numerous and thin, and ultimately her diagnosis with paranoid schizophrenia came to be seen as the true cause.

One of three shots hit Warhol, piercing both lungs and multiple other organs. The fact that he survived was incredible. Warhol spent two months in the hospital, fighting for his life. At one point, his heart stopped beating, and doctors were forced to open his chest and manually restart his heart. In that way, Solanas accomplished her goal of murdering Warhol, but luckily only for seconds.

The effects of Solanas’s attack didn’t end there, however. When Warhol tragically passed away on February 22, 1987, from seemingly routine gallbladder surgery, it came as a shock to many. Leading up to Warhol’s surgery, his doctors had expressed their expectation that Warhol would survive and even supported this claim just after the surgery when they noted he was recovering well. However, later that night, Warhol experienced an irregular heartbeat in his sleep due to complications from the surgery, and it claimed his life.

After his death, his medical history, risk level, and the level of his care all came under intense scrutiny. It was revealed that a number of factors made the surgery riskier than previously believed, including a family history of gallbladder issues, Warhol’s own reluctance to treat the underlying condition, and sadly⁠, his previous gunshot wound from Solanas. Though doctors agreed that the gunshot wound alone wouldn’t likely have led to the surgery becoming fatal, they also agreed that it played a major role in heightening its risk level.