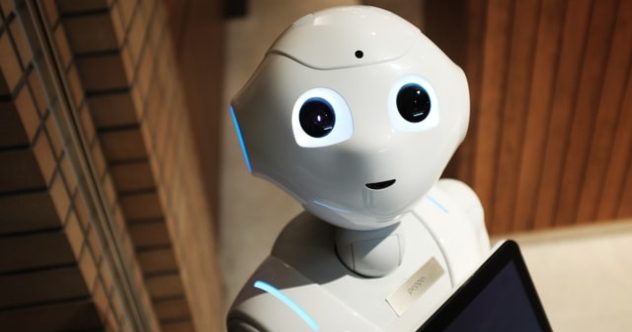 We’ve come a long way from fearful predictions of artificial intelligence taking over humanity, and futuristic renderings of robots that look like CP3O had a baby with Rosie (the robot maid from The Jetsons).

Engineers have crafted silicon skin that mimics human skin texture; they are perfecting the subtleties of expression. They’ve even crafted autonomous-minded conversationalists with the ability to learn and store information based on interactions with humans and other robots.

No, robots and AI haven’t taken over the world yet, but their brains are in our technology, and the robot model can be so realistic it’s terrifying. Here are ten realistic robots that will freak you out.

Related: 10 Interesting Facts About The Rise Of Sex Robots

Ai-Da recently made news when she was stopped from boarding a flight. Why? Because she’s a robot, and the country in question suspected that she might be a surveillance robot. Now, she’s no James Bond, nor is she even the webcam on your laptop that you cover up with a sticky note so the government can’t spy on you. No, Ai-Da is an artist, darnit! Let her fly, let her paint!

Ai-Da’s programming is so sophisticated that it allows her to process everything she needs to sculpt, paint, and draw. Her torso and up are all very developed, and engineers gave her a fitting female voice. What entirely gives her away as a robot is her pair of exposed, mechanical arms.

Her claim to fame is being the first AI to create self-portraits. Did she self-portrait herself because she wanted to? No, her creators programmed her to do that, and there’s no sign of sentience—yet. But this accomplishment still shows the potential of a robot to infiltrate more than computers and numbers. Even art is on the table.

Sophia the robot hit the scene in 2016 and almost immediately went viral. She is pretty badass, especially with her Mojo Jojo-esque brain. Developed by Hanson Robotics, she is incredibly realistic, with very human-like responses and facial expressions. I mean, just watch her speak. It’s the eyebrows, the way she moves her head when she speaks, even the quality and texture of her skin…it’s crazy.

Sophia’s ability to hold entire conversations with people has led to several appearances on late-night talk shows and other platforms of interest. With a shirt and a wig on, you’d probably have no idea you were speaking with an intelligent AI, maybe someone who is just a little bit odd.

Outside of looks, because it’s the inside that counts, Sophia provides the blueprint for innovative research into robot-human interaction and the future of AI in general.

Not for nothin’, but this next guy sounds like Frank Zappa named him. Geminoid DK is an ultra-realistic robot modeled after Danish professor Henrik Scharfe (down to the way he shrugs his shoulders). DK acts as Scharfe’s surrogate, and Scharfe operates it remotely.

Geminoid was originally unveiled in 2011 as a way to study the interactions between humans and robots. However, we can’t help but obsess over how realistic engineers and artists crafted its face. Out of all the robots here, this is the one you’d never guess was a robot (until you see that his bottom half is hooked up to all sorts of computers).

I guess this would be more fascinating than freaky if it weren’t for the fact that some of the robot’s facial transitions aren’t quite perfect. If you watch the YouTube video for this section (you watch the videos, right?) and skip to around 0:16, its sudden open expression is a hell game version of peek-a-boo.

Jenny, I want your numbah!

This isn’t that, Jenny. This is Jennie. Jennie is a robot therapy dog for people who cannot care for pets. It runs on batteries and doesn’t have to go to the bathroom. Unlike many robotic animals that are mostly exposed to the “bones,” Jennie is modeled after a fluffy golden retriever and was given all the cute nuances.

Its face is a little like a taxidermy project gone wrong, but it’s real enough to be convincing from a distance…it’s pretty creepy. Still, the creator has gone to great lengths to meet a need, and he’ll probably be a very rich man one day. Even if robot dogs aren’t man’s best friend.

We covered the robot emotional support dog, but what about an emotional support robot human? Nadine, who was developed in Singapore by Professor Nadia Thalmann, is what robotics folks call a “social robot.” That means she is capable of conversation, remembering things you tell her, and learning. Her design isn’t half bad, and engineers even gave her hands! The only thing is that her hands are different (some OG Michael Crichton Westworld right there).

Like, you know how you’re supposed to dance the robot with Barbie hands? They’re like that. Go in for a handshake, and there’s no firm grip, just a weird robot hand with thick fingers.

Nadine’s potential to become a prototype companion robot is pretty high, and her purpose is noble. But she is a little freaky looking—only because she’s a robot. I’m sure she’s a lovely human being.

I guess this is what robot-fearing people mean when they say that robots are taking over human jobs. The Henn na Hotel in Japan is staffed almost entirely by AIs. These AIs are not only friendly and experts in hospitality, but they are also multilingual. There’s even an English-speaking dinosaur robot. This is great for business as the robots have entirely opened up the hotel to the world’s travelers and unique hotel enthusiasts.

However, I can only imagine what kind of paranoia would surface being humans at the mercy of robots. Will the hospitality staff turn on the tourists? Is this where the robot revolution will begin? Yes, that’s right, get them comfortable, and when they’re asleep in their rooms at night, robots attack!

Ahem, anyway. The hotel’s concept is centered around technological evolution, but no room service, no microwaves. There is Wi-Fi, though. Maybe in the future, humans won’t need to eat.

Up until now, in this list, engineers have developed these robots for more innocuous reasons: art, support, hospitality. This one, though, was built to be a spy/DNA-taking mosquito. Not only did the U.S. Air Force help a team of researchers create something to invade your privacy, but they also made it one of the most hated creatures on the face of this planet.

This micro aerial vehicle (MAV), or nano-drone, was designed to fly and land perfectly on someone’s skin. An operator controls it from afar. The MAV has eyes and ears, too (a camera and a built-in microphone). Now, I guess, yeah, that’s freaky. But that’s regular spy stuff. What you should really be worried about is the fact that this thing can “bite” you, take a DNA sample, and inject an RFID chip underneath your skin. That is a tracking device.

Today, it’s tracking devices. What is it going to be tomorrow, terminal illnesses?

Militarize robots, they said. It’d be a good idea, they said. Actually, for the sake of testing how well a soldier’s clothes and protective gear can withstand hazards, yes, it’s a good idea. Developed by Boston Dynamics, PETMAN was made for just that, and yes, he was engineered to move like a soldier, too. It can squat, jump, do push-ups, and maintain homeostasis.

If we rewind to middle school science classes, homeostasis used to be the thing that defined a “living being.” Of course, that has changed, and maybe because of, you know, robots being able to maintain homeostasis, too.

Though PETMAN isn’t a skinned robot, when put into military gear, you can’t tell. It makes you wonder how soon robots we’ll be fighting our wars for us or instilling peace.

Diego-san is a one-year-old robot baby developed by UC San Diego, Kokoro, and Hanson Robotics in 2013. Its baby purpose is to help researchers study cognitive development. You could put clothes and a wig on it, and that would do just fine to cover up its pneumatic actuators.

The problem is that it has an oddly large head. The head stores all the hardware to run instructions and the 27 servo-motors that control Diego-san’s facial expressions. It can also interact with humans the way a one-year-old would.

Outside of the awful name, HRP-4C is a neat robot. Why? It can dance! In fact, it can full-on entertain, sing, and perform alongside humans. The robot’s full female body, however, is a little strange. Though engineers and artists have come a long way with facial expressions, they still haven’t mastered the art of fluid movement.

Listen, HRP-4C can dance, but if I want jazz hands, I’m not going to get jazz hands. And her arms seem strangely long. The more you look at HRP-4C, the freakier she gets, and the more you question whether or not an Austin Power’s fan made her emulate Fembots.