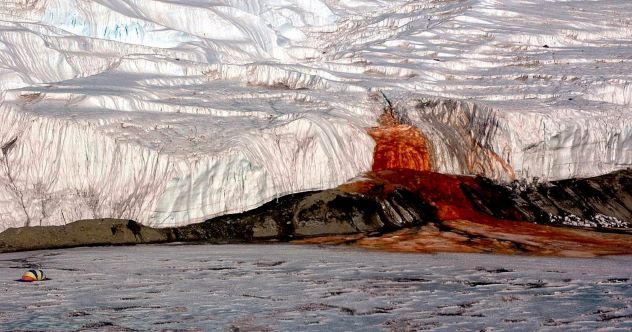 City, suburb, farmlands, repeat. The world we’ve built for ourselves can be awfully dull and repetitive. Sure, there are some incredible mountains and rivers, and the world’s coasts aren’t half bad, but then you remember that Fresno, California exists.

Wouldn’t it be nice to have a bit of strangeness in our environment? A little something out of the ordinary to renew your faith in the Cosmic Jester?

If you answered “Yes,” this list will be for you. If “no” was your answer, and you’re happy with the drudgery and the liminality of your cookie-cutter world, just remember one thing: there’s a place on our planet where a waterfall falls horizontally. Don’t you want to see that?

10 The Stunningly Beautiful “Zone Of Death”

There is a curious strip of land in Idaho’s portion of Yellowstone National Park where laws don’t act in the way they should. The Sixth Amendment to the U.S. Constitution states that “In all criminal prosecutions, the accused shall enjoy the right to a speedy and public trial, by an impartial jury of the State and district wherein the crime shall have been committed….”

Cool, but what happens when the crime is committed in the “Zone of Death,” a place where Wyoming has sole jurisdiction? If, say, a murder is committed there, the defendant would have to stand trial in Cheyenne, Wyoming. Yet, the crime was(technically) committed in Idaho. The wording of the Sixth stipulates “State” as well as “district.” So the rights of the accused would be violated by transporting them for trial beyond the state in which the crime was committed.

This is technically the case but practically untrue—the loophole has been “debunked” several times but (thankfully) never put to the test. The scenery is lovely there, though.[1]

If you’ve ever been to a particularly touristy waterfall, you will have noticed the preponderance of guard rails and fencing all around. These are here for obvious safety reasons. Most other falls that attract the masses are usually precluded from the requirement for rails by the environment—only accessible by boat, the top is hard to get to, etc. What would you do, however, with a highly popular waterfall that doesn’t “fall”?

Among Australia’s more odd natural wonders is Garaanngaddim, aka the “Horizontal Falls,” in the Kimberly region of Western Australia. This is a fascinating place where the waters of Buccaneer Bay rush (imperceptibly) downward through a very narrow gorge. This causes the water to seemingly form rapids for no good physical reason, given that the incline cannot be seen among the frothing waters. If you’ve ever wanted to sail across a waterfall, this is a place you can do it…but you should probably lay off the entheogens too.[2]

8 The Least Rainy Place on Earth

Nobody likes a rainy day. Even people who say they do are lying. You can’t go out unless you don some hydrophobic robe and hold a stick with a hexagon of material on the end above your head. The light disappears and lowers your mood, and the chances of all manner of devastating weather-based catastrophes occurring increase sevenfold—cars don’t skid on sunshine, and nowhere was ever flooded by a gentle breeze. Rain sucks.

So why hasn’t mankind moved to the areas of Earth where it rains the least? Because they suck worse, that’s why. Take the McMurdo Dry Valleys. There has been no rainfall there for two million years, making this one of the world’s most extreme deserts. But fret not, should you find yourself there, there’s a lovely big lake named Lake Vida. Except it’s a hypersaline lake. And constantly under ice. Yeah, this place is in Antarctica. No chance of sunstroke, at least.[3]

7 The Islands That Are 21 Hours and 2 Miles Apart

These islands are an example of how mankind makes a lot of perfectly normal things in the natural world perfectly weird. The invention and implementation of time zones have done a lot for our species—reliable hours for work, allowing international travelers to accurately measure how many Xanax to take on a flight, and no more looking up at the sun to determine what time it is at the expense of your eyesight.

But there are downsides: some stubborn governments insist on keeping one unified time zone for the whole nation despite being big enough to warrant several (China), and certain Polynesian people get the unearned, grossly unfair benefit of ringing in the new year before everyone else.

Perhaps the most ridiculous example of this is the Diomede Islands, two small islands that are slap bang in the middle of the Bering Strait. Big Diomede is part of Russia, Little Diomede the USA. They are, as the title of this entry suggests, two-ish miles apart. However, due to the international date line, they are 21 hours apart. If you live on Big Diomede but have a pressing business meeting on Little Diomede, you can get there on a speed boat in an hour or so and be there yesterday and return the same day…which will then be tomorrow, Mr. McFly.[4]

Yes, this medieval tower is on a more pronounced lean than its far more famous cousin in Pisa, Italy. Despite this accolade, the Italian tower is far more photographed, visited, and celebrated. Where’s the justice? Found in the village of Suurhusen, this leaning steeple was erected in the Middle Ages. The foundation was made with oak trunks that shifted considerably after the groundwater drained in the 19th century, causing the wonderful wonk. It beats that flashy, do-nothing tower in Italy.

But there is a problem.

Despite beating its more famous cousin, this isn’t the “most leaning” building on Earth. That accolade was given to the Capital Gate Tower in Abu Dhabi by the Guinness Book of World records in 2010, noting that the 18-degree lean was greater than that of the tower in Suurhusen. As if that wasn’t bad enough, the tower in the UAE was specifically built that way. It didn’t “earn” it like the leaning tower of East Frisia. Cheaters.[5]

5 Dune Skiing…Followed by a Pint of Beer

You pop on your goggles, clip into your ski boots, adjust your camo shorts, and apply a last blob of sunscreen. The dune is tall; the slope is perfect for some high-speed shredding. You realize that all those people freezing their butts off in various snowy resorts are idiots compared to sand skiers and boarders like you. But where in the world are you? Egypt? The Negev? The Gobi?

Nestled among the beautiful countryside is the town of Hirschau, a place where kaolinite was mined for the porcelain industry during the 1800s. A by-product of this was quartz sand—tons of the stuff. Enough, in fact, to make a mountain. Monte Kaolino. The massive mound is now a mecca for skiers who fancy a day on the slopes in the middle of July.

So next time you’re dragged to a stuffy antique dealership and forced to look at pastille-painted porcelain figurines of cows and beggar boys, just remember that one of the coolest resorts on Earth was formed as a by-product of that precious quaint crap.[6]

TV news networks have a few tried and tested segments they will run whenever there is a slow news day—somebody did something nice for charity, a pet has done something that animals don’t usually do, some kids have done something kids don’t usually do, and every once in a while, some cultural quirk from a far-flung corner of the world becomes relevant to the locale in question. A local man has learned Igbo in order to converse with staff at his local Nigerian restaurant in their mother tongue. A lady in Denver has returned from visiting a McDonald’s in every country the chain has a branch. And then there are the “Languages other than English are weird” sections…

You’ll see little titbits about the place in North Wales that’s incredibly long (*Author’s note* As a proud Welsh speaker, I can, of course, say Llanfairpwllgwyngyllgogerychwyrndrobwllllantysiliogogogoch) or that place in New Zealand (Taumatawhakatangi­hangakoauauotamatea­turipukakapikimaungahoronukupokaiwhen­uakitanatahu) pop up quite regularly in bland YouTube travel vlogs or local news shows.

But there are a number of places on earth that do the opposite; they have one-letter names. The title of this entry contains them all. From a windswept island off the coast of Scotland, a mountain in Hokkaido, and various small settlements across Scandinavia, one-letter places are varied in their characteristics, some mundane, some stunningly beautiful, some weird as hell.

Take the river D in Oregon. The City of Lincoln fought a decades-long battle with the Guinness Book of World Records to get their waterway recognized as the shortest (not only by name but by length—a reputed 120 feet—claiming that the Roe River in Montana was lying. In 2006, the book dropped the record altogether, allowing D-lovers to claim a moral, scorched earth victory. This may be how the next civil war begins…[7]

Landlocked nations, exclaved regions, and partially recognized states are fascinating. All over the world map, you’ll see countries like Abkhazia, South Ossetia, and Kosovo, which are disputed. You’ll also see little countries like Lesotho, which are entirely surrounded by another country—“You want to cross the border? Welcome to South Africa.” There are bits of India floating in a sea of Bangladesh and vice versa.

Perhaps the most fascinating anomaly in this weird geography space is the So’x (Sokh) District of Uzbekistan. It lies near the borders of Tajikistan and its official nation of Uzbekistan yet is completely surrounded by Kyrgyzstan. Almost all the people that live in this district of Uzbekistan that is surrounded by Kyrgyzstan are Tajiks. Imagine a small village in Cornwall that is officially part of Sweden but entirely populated by Swiss people—that’d be where all the chocolate-covered herring pasties are found.[8]

2 The Lake Where Jellyfish Live up to Their Name

On the tiny island of Eil Malk in the Pacific nation of Palau, there is a marine lake. It’s called Ongeim’l Tketau in the Palauan language. This means “Fifth Lake.” In English, it is known as “Jellyfish Lake” because, well, check the video. There’s a ton of the nasty little buggers, all floating and bobbing around, ready to sting any unlucky swimmer looking to cool off in the burning Pacific heat. Doesn’t it give you the creeps? Imagine the amount of pee you’d need to be sprayed on you back on the shore…

It shouldn’t—these jellyfish—the “Golden Jellyfish”—have been so isolated from their former home in the ocean that they have evolved. Due to the lack of predators, these formerly stingy blobsters have shed their clubs and, therefore, most of their toxic clout. So, they won’t harm you. But hungry saltwater crocs are swimming about. And a layer of highly toxic hydrogen sulfide about 15 meters (50 feet) below the lake’s surface that’ll absorb into your skin and kill you up nice and quick.[9]

This little city in the great state of Michigan is built on lies. Lies and deception. That’s according to a local legend regarding the provenance of the city’s name. When Daniel and Solomon Johnson from New York settled in the area, they built a sawmill. Over time, the settlement grew and became stable. But the place couldn’t develop past being a sleepy backwater with a lucrative mill. Immigrants searching for a place to lay down some roots were called to the big cities—St. Louis, Baltimore, Chicago.

So, as the story goes, the town was named “Zilwaukee”’ in order to trick unwitting settlers into coming to their little corner of Michigan instead of making the trek to Wisconsin. Who likes power tools and cheese that much anyway?

Despite the lack of solid evidence that this legend is true, the locals seem to cling to it regardless. Perhaps the city’s motto should be “Ha! Fooled you, suckers!” and the city anthem should just be a massively blown raspberry.[10]