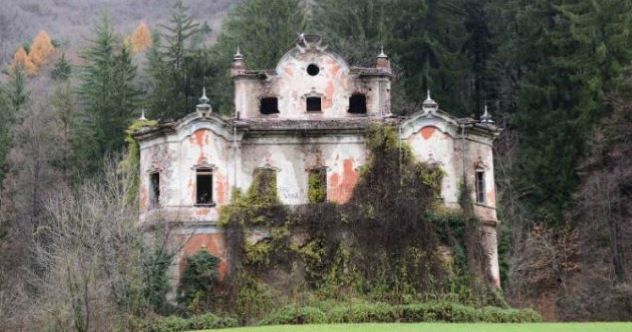 Not all structures are built equal. Some are bland and serve a basic purpose, while others are extraordinarily elaborate and boast incredible features. The exterior of any structure, whether a house, building, bridge, or monument, is arguably what grabs the attention most. The architects and builders of the structures on this list made sure that their designs were quite unforgettable and, you know, creepy.

Related: 10 Awe-Inspiring Buildings You Won’t Believe We Tore Down

Amusement parks are meant to provide hours of fun and entertainment in the form of rides and games. Going to such a park usually doesn’t warrant a second look at the exterior because the inside is where the fun awaits. However, when it comes to Luna Park in Australia, you’d probably be applauded if you made it through the entrance in the first place. Here, a giant grinning clown face beckons you (or dares you) to enter.

There have been eight different faces over the years, each more terrifying than the last, with the current one—installed in 1995— based on the 1950 “Old King Cole” version.

In 2011, asbestos was discovered in one of the towers that support the face and was immediately removed while the park was closed to the public.[1]

9 Cabin in the Woods

A small cabin without running water and several locks? Sounds like something from a nightmare, right? This cabin is downright creepy, and once you realize it’s the Unabomber’s cabin, it becomes even more terrifying.

It was inside this tiny structure that Ted Kaczynski constricted sixteen bombs which he used to kill three people and injure a further 23 across America. He built the cabin himself and lived there for 25 years, and it is infamous for being one of the most diabolical-looking structures in the world.

Today, the cabin is on display as part of the FBI Experience in Washington D.C., still looking every bit as creepy as it ever did.[2]

In Khlong Mai, Thailand, stands the 17-story Wat Samphran Temple, a massive pink building with a huge snarling dragon literally encircling it. It is located 25 miles from Bangkok, and its origins remain unknown.

Some visitors don’t find the exterior of the building scary at all and have explored it to the point of allegedly discovering a religious group inhabiting the top floors of the tower. The building complex consists of smaller temples and monuments, and there is a bronze giant Buddha statue inside.

The dragon has been constructed from iron and glass fiber and while it’s completely dark inside, some have navigated the hollow parts of it by foot.[3]

The ball inside the eight-pointed star and cube on top of the Wedding Palace in Turkmenistan is meant to symbolize Earth and the four entrances to the building represent the four directions. Inside you will find various stores where you can shop for wedding accessories, including dresses, to your heart’s content. It is a civil registry building, and many couples have chosen it as the location for their wedding, as they can conveniently register their union after having the ceremony in one of the three wedding halls.
The strange exterior of the building, however, has caused many a visitor to stop and stare, especially at night when it’s lit up in red. In that state, it resembles the home of an angry supervillain.[4]

Villa de Vecchi is also known as the “House of Witches” and was originally built to be a summer house for Count Felix De Vecchi. The villa is located near Lake Como, Italy, and looks as if it could be used to house a myriad of horror movie killers, especially since it now lies abandoned against the mountains of Cortenova.

Its backstory adds to the eerie atmosphere of the house: The architect died only a year after construction, and Count De Vecchi came home one day in 1862 only to find that his wife had been brutally murdered and his daughter had vanished. He couldn’t find his daughter anywhere and committed suicide a year later. The count’s brother moved into the villa shortly after, and it was finally abandoned in the 1960s.

Then, during an avalanche in 2002 all the houses in the surrounding area were destroyed. Only Villa de Vecchi remained standing.[5]

Cathedrals are usually imposing structures with high spires, marble statues, unique facades, and stained-glass windows. They serve as magnificent backdrops for elaborate wedding ceremonies, and thousands of beautiful cathedrals have been built worldwide over hundreds of years. Some cathedrals have been branded as creepy or eerie because of tragic events that have occurred within their intricately decorated walls.

The Clermont-Ferrand Cathedral takes the concept of eerie to another level, however. Built entirely from black volcanic rocks, this cathedral makes for a forbidding spectacle on a hill in the center of Clermont-Ferrand, France. The building material makes sense considering the largest chain of dormant volcanoes in the whole of Europe surrounds this French town, and plenty of other old buildings here have been built from volcanic stone as well.

When it comes to building a church with black stone though, it certainly comes across more creepy than charming.[6]

The building has been tagged on several forums under the words evil, scary, and of course, Illuminati. Some have likened the structure to something you’d find on Stargate or Game of Thrones. It has since been confirmed that the architecture was inspired by Blade Runner and Mad Max.

Inside, however, things run like clockwork with 35,000 sets of sunglasses manufactured every day. The premises also include a functioning military tank, a torpedo, and a bike track.[7]

The Gazprom Arena in St. Petersburg, Russia, is truly a sight to behold. You know, mostly for normal reasons. These include its retractable roof and retractable pitch and its overall design, which is modeled on Japan’s Toyota Stadium.

Everything is truly normal until the day turns foggy, or the early-morning mist builds up around the arena until only the top part sticks out, pointing toward the sky. Then, suddenly, the structure is transformed into a massive UFO that seems just about to beam back up to where it came from and take you with it…[8]

While the Mask of Sorrow monument commemorates the prisoners who died in Gulag prison camps over three decades, it isn’t something you want to stand in front of at night, alone. The concrete statue depicts a face with tears falling from the left eye in small masks. The right eye is a barred window, while the back of the monument includes a weeping woman and a crucified man. The inside of the stark structure holds a prison cell replica.

Leading up to the site where it sits on a hill above Magadan, Russia, several large stones guard the walkway, many with religious symbols carved into them.[9]

The Nakagin Capsule Tower in Tokyo was built in just one month in 1972 and consists of two concrete towers which hold 140 self-contained capsules that are 2.5 meters by four meters. These capsules are either office or living spaces and are definitely not an option for those who suffer from claustrophobia.

On the outside, the capsules make for an “irregular stacked” look, and the windows are reminiscent of those found on submarines or ships.

The building was slated for demolition in 2007, but this hasn’t happened because the international architecture community sees the structure as a masterpiece and does not want it to be destroyed.[10]

The Salem Witch Museum offers a fascinating look into the intrigue and tragedy of the Salem Witch trials of 1692. The museum houses thirteen life-size stage sets complete with lighting, figures, and narration that tell the story of those turbulent times, which saw over two hundred people accused of witchcraft. Thirty were found guilty and nineteen executed.

A second exhibit focuses on the European Witch trials and witch-hunting, as well as modern witches.

The museum opened in 1972, but the building was a church, hosting several congregations from 1718 until 1956 when a fire damaged the church. Then, it housed a car museum that saw its own fire ten years later before being sold to eventually become the witch museum. The original property belonged to Reverend John Higginson in 1692. It looks like a small chapel from the outside, but it lives up to its witchy name at night when the windows are lit up in red. [11]