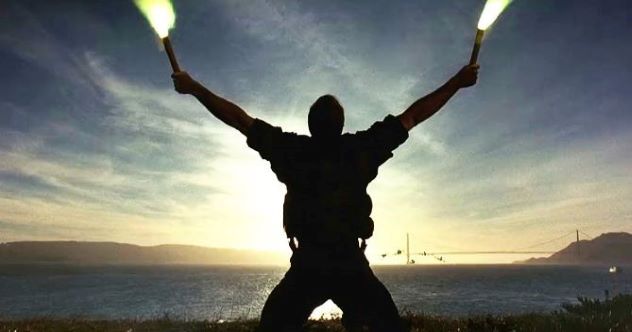 The world loves a hero, and the more unlikely, the better. Naturally, there are the obvious stars who will inevitably get the job done, albeit with a tiresome final battle to seal the deal. Think Die Hard’s John McClane, Alien’s Ellen Ripley, and anything with Arnie. The only problem with these guys is their ultimate victory was never really in doubt. All were qualified to disarm/maim/destroy unsavory types and did so either with or without snappy one-liners.

However, the real heroes, the most exciting, are the ones we don’t see coming. We’re talking about the massively underestimated underdogs. Too old, too young, too weak, or too…female. At our first underwhelming glimpse, we sigh and remain patient. Either they’ll be killed off, or a far more qualified bad-ass will save them.

And yet no. The unlikely hero gets us out of our seats. We start cheering for them and high five complete strangers when they win. If they can do it, we can do it. So, here are some of our favorites.

10 Samuel Jackson as Zeus Carver in Die Hard 3: With a Vengeance

Zeus Carver was an angry-at-the-world Harlem electrician with no notable combat skills. This was evident when he stepped in to save McClane from being lynched by incensed locals. Zeus snatched McClane’s gun and waved it around like a firecracker as they fled. And a very watchable action duo was born.

Although McClane did most of the heavy lifting when it came to eliminating pesky terrorists, Zeus more than held his own. Quick with an insult and just as quick between the ears, Carver solved Simon’s infuriating riddles, which kept the duo in the game to save NYC.

Audiences looked past the massive chip on Zeus’s shoulder and began to enjoy his street smarts and relentless banter with McClane. He played to his strengths—what he lacked in weaponry training he made up for in intellect and a pig-headed refusal to surrender. Zeus grew up on the streets of Harlem so wasn’t in the least intimidated by a terrorist kingpin telling him to stick his well-laid plan up his “well-laid ass.” [1]

The first 30 minutes of Speed was a testosterone-fueled blur of hostages, explosions, and men in SWAT uniforms shouting at each other. So far, so normal.

Then the delicious twist. A bus loaded with a bomb would detonate if the speed dipped under 50 mph. Cue a passenger who thrives under pressure, can handle a bus, and has preferably lost their license for speeding. Enter Annie. A humble office worker forced to take the bus to work with a bunch of other nobodies.

It didn’t take long to warm to Porter. She was savvy, cheeky, and cursed like—ironically—a bus driver. We assumed manly Jack would take over the wheel and thank Annie for her efforts, but it wasn’t to be. Instead, the wisecracking Porter held strong and dealt with crowded L.A. freeways, sudden diversions, and passenger transfers—all while belting along at 60 mph.

Traven was the cool, dependable cop, but Annie was the everyday girl who stole the show. She was scared out of her wits but stuck it out. Porter gave us hope that if the time came and we were called upon to drive a bomb-rigged bus, we could. Or to at least encourage the person next to us to give it a try.[2]

Always be wary of the history student. While this advice may not be dispensed to crooked government agents around the world, Babe Levy showed they at least deserve respect. For if a scrawny, mild-mannered graduate can kill spies and force Nazis to eat their own diamonds, then who can’t?

In Marathon Man, Babe Levy got up from the canvas time and time again. He was kidnapped, bashed, shot at, and had his teeth wrenched out. Yet the indomitable spirit of the everyman prevailed, and Levy ended up handing out several ass-kickings of the highest order. These included blasting away an assassin and forcing a psychotic ex-Nazi to eat his precious diamonds at gunpoint.

It seems you can only push around a history graduate for so long.

An insight as to what made the Babe character tick was his hobby—marathons. Marathon runners are renowned for being tough, gritty types that keep on keeping on. Good thing marathons were his hobby. If he was into, say, pine-cone painting, he wouldn’t have survived the first 20 minutes, and the title wouldn’t be as catchy.[3]

Not that there’s anything wrong with pine-cone painting.

In a cast of thoroughly unlikeable people, Suzie Toller reigned supreme as the most cunning and arguably most deserving survivor. Suzie was a hero in the greyest sense of the word. An obvious victim—poor, troubled, promiscuous—with a penchant for Goth fashion. A quick exit, one might think, but not in the seriously complicated Wild Things.

Toller outwitted her school friends, the police, the audience, and probably the screenwriters, so multi-layered was her scheme. After being seemingly killed off mid-movie, Suzie turned up for some serious payback in the final credits. If ever there was a movie that demanded sitting through the final credits, this would be it.

To earn her million-plus, Toller had to pull out her teeth with pliers, fake a death, shoot an accomplice, and then poison her unsuspecting lover.

Did she have her flaws? Of course. Was she as bad as her victims? Probably not. Was she unlikely? Definitely.[4]

6 Nicholas Cage as Stanley Goodspeed in The Rock

Guitar-strumming, Beatles-loving biochemists are as unlikely as action heroes get. Stanley Goodspeed reasonably assumed the FBI just wanted him to play with some chemicals. After all, they had legendary SAS man Sean Connery and a terribly serious-looking SEAL team on their side. Goodspeed was far more at home in a bath, stroking his pregnant fiancée’s stomach.

As he summed himself up to Connery’s John Mason—”I lead a very uneventful life. I drive a Volvo, a beige one.”

When Goodspeed and a SEAL team were sent to secure Alcatraz from madmen, his job description was quickly revised. The entire SEAL team was annihilated, and Goodspeed was suddenly required to assume more violence-related responsibilities. No problem for John, big problem for Stanley. This is why we loved him as the unapologetic pacifist, forced into playing war games with overgrown boys.

Did he bite his tongue and refuse to complain? Of course not. Did he save the entire Bay Area from destruction with unbridled determination to stick it to the bad guys, probably stewing inside him since school? Of course he did.[5]

Zero Dark Thirty’s initial scenes suggest that CIA agent Maya is there to provide support to senior member Dan, who’s no slouch in the torturing department. Maya is shocked and even nauseated by a prisoner’s treatment but relents, recognizing the bigger goal. She reminds the prisoner that he controls his fate, and we realize she’s no soft touch.

It becomes apparent that she knows exactly what she’s doing, and the powers that be start taking her seriously, very seriously. The condescension stops.

As the film reaches its climax, we see Maya stare down the CIA director and then order a battle-hardened SEAL team to fly into Pakistan and take out one U.B.L. She calmly tells them, “Bin Laden is there. And you’re going to kill him for me.”

If you thought driving a cab for a living sucked, Collateral proved it. We see Max as a patient soul who is a complete professional. His cab is immaculately clean, and he politely insists on providing the fastest routes. He keeps a postcard of an island under his visor for a mental escape when the job gets too demanding.

It gets very demanding when Tom Cruise’s Vincent jumps into the cab. Well-spoken, if slightly abrupt—if only he wasn’t a psychopathic hitman with a long list.

Max watches Vincent calmly shoot two thugs in less than three seconds. He realizes how out of his depth he is and can guess only too well how it’ll end. As Vincent’s hits tally up, the head games begin, and Max is subjected to taunts, not just from his captor but his own mother.

The tension is cranked up to an eleven when Max has to pose as Vincent, which involves the not-Latino Max entering a packed Latino club without soiling himself. Like every great unlikely hero, he has two choices. Either lie quivering in the fetal position or do whatever he can. Impersonate a hitman, kill said hitman…[7]

When Marge Gunderson lumbered onto the screen in Fargo, we admired her for still slaving away despite being seven months pregnant. It seemed clear she was there to add a few gags and provide insights to the detective/s who would soon take over, being pregnant and all.

Obviously not. Behind the folksy Minnesotan accent full of “yah’s” and “you don’t say’s” was a fierce intellect and razor-sharp B.S. detector.

Marge was almost Colombo-esque in her unhurried approach, lulling suspect Jerry Lundegaard into thinking he was smarter. She came at him slowly from different angles, outfoxing him with logic and decisive questioning that left him tongue-tied.

After hunting down kidnappers all day, Marge nestled next to hubby Norm and asked him about his stamp paintings. Just because the rest of the world was losing its head didn’t mean they had to. As she scolded a kidnapper who had just fed his partner into a wood chipper, “there’s more to life than a little money, ya know.”[8]

2 Harrison Ford as Richard Kimble in The Fugitive

Kimble was the classic underdog. A dithery-looking surgeon framed for the murder of his wife and hunted down by the scene-chewing Tommy Lee Jones. When his prison bus crashed and Kimble escaped, we thought, “Okay, he’s free, but now what?” How to prove his innocence and how to get rid of a dreadful-looking beard?

Thankfully, the beard soon went, and Kimble’s stock began to rise. This was a desperate but very resourceful man.

What made Kimble truly memorable was Ford’s ability to portray an everyday guy, scared out of his wits but still able to focus on survival and revenge. This meant acting as a hospital janitor to pick up clues while keeping an eye peeled for the police.

Kimble simply kept his head and played the long game. Being a surgeon didn’t hurt either—they’re generally a smart bunch.[9]

1 Linda Hamilton as Sarah Connor in The Terminator

Unlikely heroes are generally confronted by an evil individual—a human, usually. Not so for Sarah Connor. The restaurant waitress versus a cyborg from the future—hardly fair. Sure, she was helped along by an efficient Kyle Reese and a largely inefficient LAPD.

Sarah caught on fast, though, realizing the Terminator wasn’t going anywhere. She soon got used to throwing pipe bombs and high-speed truck chases, all the while remaining suitably terrified. Connor finally destroyed it with the help of a hydraulic press, sending it off with the immortal, “You’re terminated, f**ker.”

There would be no more waiting on tables for Sarah Connor, and even if there was, it’s unlikely she would have put up with someone whining about no ketchup.[10]

The unlikely hero taps into something deep down that they and the audience didn’t know they had. They not only lift our spirits for two hours of riotous fun, but we leave the cinema walking a little taller and feeling a little better about our own lives, knowing that if we crossed paths with a cyborg or assassin one day, we’d probably be alright.