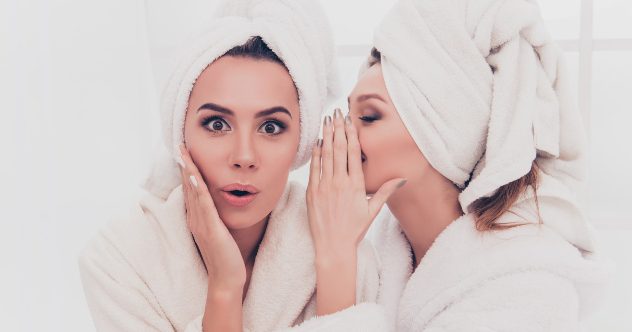 Time has this weird habit of marching forward, constantly and without end. Despite that, people have spent all of human history fighting its effects. Sometimes that means great strides in medicine, genetics, and hygiene. Sometimes, though, it means rubbing bull semen on your forehead and setting your back on fire.

There is a disgusting or dangerous counterpart for every anti-aging treatment you’ve ever heard of, and a shocking amount of them involve rubbing bodily fluids on your face. People with abundant time and money have tried just about every substance under the sun to fight the signs of aging—with predictably mixed results.

As a small sampling of those trials, here are ten of the most bizarre things people do to look younger. This list kicks off with a classic trilogy of substances whose anti-aging properties are as dubious as they are popular. Up first: urine.

Some people claim it’s safe to drink your own urine because it’s sterile. You might want to only consider doing that if you find yourself dying of thirst in the desert. But what about urine baths? Can they provide a more youthful-looking you?

It turns out that urine contains some medicinal properties. Ninety-five percent of urine is water, while the remaining five percent, known as urea, contains some useful things like penicillin and stem cells. Urea is also found to be good for exfoliating your skin because its natural properties can soften skin as well as break down the top layer of your body’s skin cells. Urea acts like glycolic acid, salicylic acid, and lactic acid, which by the way, are safer to use than your own urine.

Some people say that the urine should be left to dry on the body before rinsing it off. Bathing in urine may give you fresher-looking skin, but you might lose friends and family in the process.

Bird poo facials were introduced into the United States about five years ago. However, these facials have been around in Japan since the 1600s. Because of the heavy lead-based makeup that geishas and Kabuki actors wore, it took a toll on their skin. Enter nightingale excrement, used as an exfoliating agent. It turns out bird poo is loaded with enzymes that are good for the skin. The end result of these poop facials is the skin is left luminous.

A bird poop facial consists of powered and sterilized nightingale poop that’s been mixed with powdered rice bran. They add water and brush the concoction onto the face before massaging it into the skin. The facial supposedly smells pretty good, like toasted rice.

If you’re thinking of doing your own bird poop facial at home, be sure to gather poo only from birds of the nightingale species. It turns out the enzymes in the poo come from the seeds they feed on. And it must be passed under a UV light to sterilize it before using it.

Helen Gurley Brown, the renowned editor of Cosmopolitan, brought the topic of applying semen to the face to our attention in her 2000 memoir I’m Wild Again. Some call it man moisturizer. Today spas are charging hundreds of dollars for semen facials. However, there is no scientific evidence that semen is good for the skin. In fact, you might have an allergy to semen and not know it until you look in the mirror after a semen facial and find your skin looking dry and irritated instead of luminous.

Most importantly, these semen facials may be a health hazard because semen can carry sexually transmitted diseases like herpes and chlamydia. Your eyes are particularly vulnerable to getting infected. Buyer beware—speak to your health care professional before proceeding.

If you have a fear of snakes, this massage therapy is not for you despite the fact that the snakes used for these massages are non-venomous. Snake massage started in India and then spread to other parts of Asia. Indonesia took to it fast. It’s popular in Brazil and Russia and has now come to the United States.

The movement of snakes over the bare skin of the body is said to improve blood circulation and releases endorphins which translate into healthier-looking skin. It also stimulates the person mentally.

Not everyone is in favor of snake massages. People for the Ethical Treatment of Animals (PETA) do not support snakes being used in this manner, saying that it stresses the poor creatures out.

Cindy Jackson, now in her mid-fifties, wasn’t born beautiful. At least that’s what she believed from age fourteen when a guy made an insulting observation about her face. Fifty-two surgeries later, Cindy feels not only vindicated but beautiful.

Born and raised in a small town in the United States, Cindy started going in for the plastic surgeries when her father died and left her some money. Since then, she has had five facelifts, multiple injections of Botox, liposuction, and her eyes have been done twice. She admits to having fourteen full-blown surgeries.

All the work Cindy Jackson has done on herself has paid off. Today she lives in London and works as a plastic surgery consultant on anti-aging.

If you are a James Bond fan, you’ve heard about the actress covered in gold in the film Goldfinger. Well, in the world of high-end beauty spas, we now have the 24-carat gold plated facial. For $540 for each 90-minute treatment, you can have your face covered with gold leaf. The treatment will target either the fat in your face or the cellulite. For an additional $200, you can be treated for both during the same appointment.

Doctor of Chinese Medicine John Tsagaris first introduced this golden facial, claiming that it reverses skin damage to facial skin caused by pollutants in the air, sun damage, and smoking.

The consensus on this facial is that doctors can’t guarantee cellulite and fat reduction in the face unless you include healthy eating and exercise as part of your regular beauty practice.

This is a form of mud mask, but it could damage your skin if you don’t know all the facts. Proponents of kitty litter facial masks recommend buying a cheap bag of unscented kitty litter, mixing it with water to make mud, and applying it to the face. You can expect your skin to be moisturized and cleansed once you wipe the mask off.

On the other hand, you may end up with skin tears because facial skin is more sensitive and thinner than the skin on other parts of the body. What causes the skin to be irritated? Some kitty litter contains aluminum silicate, the same thing found in fiberglass house insulation. In addition, because the granules of clay kitty litter have sharp edges, rather than being rounded, they can damage the skin.

Some people who try a kitty litter mask can even expect to find their face breaking out along with the development of fine lines.

People during the Victorian Era were no different than today. They were in search of anti-aging beauty products, and one of the products used in scrubs was mercury. The claim was that it got rid of acne, wrinkles, and scars. And it did precisely that because mercury is so corrosive to the skin. Since then, we’ve learned how dangerous mercury is to human beings. You can still find mercury in some cosmetics, especially those manufactured abroad.

Pregnant women should be extra careful not to come in contact with mercury. Here are a few of the symptoms that come with mercury poisoning:

The Victorians might not have known about the dangers of mercury, but we do today. Stay away from anything with mercury in it.

We’ve been told that China is the new world leader. Well, it’s certainly leading the way with a hot new spa service called the “fire facial,” and this is how it works:

The spa practitioner soaks a towel in alcohol along with a secret elixir. Then they place the towel on the various parts of the body, even the face. Once the soaked towel is in place, the attendant lights the alcohol, which starts burning off. After a while, they put out the flame with another towel.

The theory behind this spa treatment is the fire is stimulating and thus counteracts sagging and wrinkled skin. Also, your skin feels revitalized.

Let’s hope the spa practitioner knows when it’s the right time to put out the fire… And that there’s a fire extinguisher close by.

Humankind has a never-ending thirst for beauty and the fountain of youth. Could that fountain be snake venom? A fifty-year-old proponent of injecting yourself with snake venom has been doing it for the past twenty-eight years. He claims that about an hour after giving himself an injection, he feels like he has the energy of a twenty-three-year-old.

Of course, snake venom injections aren’t for the faint of heart. Before you reap any of the benefits of feeling younger, stronger, and more energized, you have to go through, possibly, years of building up your immunity to the venom. While you are going through that, you can expect bruising and excruciating pain. It seems that injecting yourself with snake venom for temporary spurts of youthful energy requires tremendous sacrifice.

And if you’re not careful… let’s just say I hope you have life insurance.