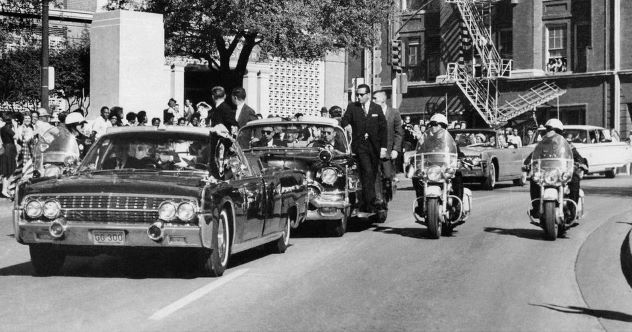 President John F. Kennedy arrived at Love Field in Dallas via Air Force One on November 22, 1963, after stops in San Antonio and Fort Worth in the Lone Star State. Thousands watched in delight as a motorcade with his vehicle made its way through the city toward a luncheon.

The joyful mood of the day changed to sadness when Kennedy was shot and the motorcade headed to nearby Parkland Hospital. However, doctors could not save him, and Kennedy was pronounced dead by hospital staff at 1 pm on November 22.

With the 58th anniversary of JFK’s assassination, below is a glimpse into the lives of some of those in the president’s entourage that fateful day not named Kennedy or Johnson.

Related: 10 Moments In American History, As Seen From The Other Side

Governor John Connally had worked as a coordinator for then-Congressional candidate Lyndon B. Johnson while in college. After Johnson’s victory, Connally worked for several years in Johnson’s Washington, D.C., office, then joined the naval reserve during World War II. He started as a naval ensign, ultimately becoming a lieutenant commander and receiving several military honors for his service.

After the war, Connally worked briefly with a law firm and eventually resumed working with Johnson, overseeing his successful races for U.S. Congress and U.S. Senate in the years leading up to Kennedy’s presidency. Connally also briefly served as Kennedy’s Secretary of the Navy before being elected the governor of Texas in 1962.

On November 22, 1963, Connally was in the president’s limousine and was struck by gunfire that caused injuries to his back, chest, wrist, and thigh. He survived his wounds and went on to serve approximately six more years as Texas governor. During a brief respite from politics, he practiced law again but later re-entered politics, advising Richard Nixon on various matters and unsuccessfully running for president.[1]

Nellie Connally had aspired to become an actress—not a political wife—when she enrolled in college in the late 1930s. However, her plans changed when she met John Connally.

While riding in the presidential limousine on that sunny November day, Nellie noticed the adoration emanating from the crowds, telling President Kennedy, “You can’t say Dallas doesn’t love you.” Moments later, the fatal gunshots rang out, giving her the distinction of being the last to speak to Kennedy.

When not supporting her husband’s professional and political efforts, Nellie raised the couple’s five children, fought breast cancer, and raised funds for various charities. Their marriage lasted more than 50 years and ended with his death.[2]

Jesse Curry had been Dallas’s Police Chief for nearly four years when President Kennedy arrived in the city on November 22, 1963. He rode in the motorcade’s lead car, an unmarked Dallas police vehicle that was intended to spot and divert trouble before it escalated. As protocol demanded, the lead car stayed between four and five car lengths ahead of the limousine transporting Kennedy—between approximately 70 and 85 feet.

Although Curry was lauded when the assassination investigation led to the quick arrest of suspected shooter Lee Harvey Oswald, the praise turned to criticism several days later when Oswald was fatally shot on live television while being transported to another prison. Reportedly, Curry was against such a public perp walk but gave in to the demands of other city leaders. He retired from the police department after 30 years of service, approximately three years after the assassination.[3]

Bill Decker was first elected Dallas County Sheriff in the late 1940s and never had an opponent in the 20-plus years he held that elected office. In the years leading up to November 23, 1963, the man once called the “most renowned lawman” to ever serve Dallas reportedly helped track down the bank robbers known as Bonnie and Clyde, worked with his counterparts in Oklahoma to arrange the return of a woman accused of murdering her husband, suspended five employees after a man was erroneously released from prison, and fired two longtime Texas lawmen.

However, Decker was more than just a crime solver; he also helped bring the sheriff’s department into the modern era.

Decker was in the lead car during President Kennedy’s ill-fated trip to Dallas. Fewer than 60 seconds after the gunfire erupted at 12:30 pm, Decker commenced the investigation that led to the arrest of Lee Harvey Oswald less than two hours after the shooting.[4]

Had Bill Greer, a native of Northern Ireland, followed the professional path his older relatives chose, he may have become a farmer. Instead, he emigrated to the U.S., served in the Navy during World War II, and ultimately found employment with the Secret Service. He accompanied President Kennedy on many trips, including locations as far as Colombia and as close as New York City.

Greer drove the modified 1961 Lincoln convertible that transported Kennedy through Dallas on that fateful day. After momentarily slowing down after the shots were fired, he sped to Parkland Hospital.

Approximately 20 years after the assassination and long after he retired from the Secret Service, Greer broke his longstanding silence with the media. In so doing, he discussed how the tragic events in Dallas had haunted him for years and may have attributed to some health problems.[5]

There were eight Secret Service agents in or around a car—a 1955 Cadillac convertible modified for its role on November 22, 1963—directly behind President Kennedy’s. In fact, Kinney was the driver of the Secret Service follow-up car, the “Queen Mary.” And these Secret Service agents were charged with the same task they always performed in these instances: they watched for items flung from the crowd or other sudden actions from members of it.

Due to a change in plans, Kinney drove the follow-up car and recalled seeing Kennedy shot, then hitting the sirens and speeding up. He contributed to a later book that the only way the Secret Service could get Jackie Kennedy to let go of her husband was if they promised her they would “cover Kennedy’s head so that no one could see.”

Kinney began his career in law enforcement as a police officer in Washington, D.C. Five years after the assassination, and with a total of 18 years of Secret Service employment that also yielded assignments with three other presidents, Kinney retired.[6]

Winston Lawson served time in the Army before joining the Secret Service.

Lawson helped plan most of the minute-by-minute details of President Kennedy’s fateful trip to Dallas, performing such tasks as vetting potential threats, determining the location of the president’s luncheon (as well as how to get there), and coordinating security for the motorcade and the luncheon. Lawson was in the lead car of the motorcade when Kennedy was shot.

Although Lawson’s professional skills were admirable, he often felt riddled with guilt about the event that he was most known for. At times, he “wished he had never been born.”. He retired from the Secret Service in 1981 after 22 years of service that allowed him to work with other presidents and vice presidents).[7]

Ken O’Donnell was a member of the Air Force before becoming a member of the Kennedy brothers’ inner circle. During his tour of duty, he was captured by the enemy but managed to escape. Upon returning to the United States, he went to Harvard University, where he became friends with his football teammate Robert F. Kennedy. This friendship spurred O’Donnell’s eventual work on John Kennedy’s senatorial campaigns of 1952 and 1958, 1960 presidential campaign, and then double duty as his appointment secretary and special assistant.

The sunny weather in Dallas on that fall day prompted O’Donnell and others to remove the bubble top for Kennedy’s automobile tour of the city. This has led to some speculation that had the weather been dreary, and the bubble top stayed on, Kennedy’s wounds may not have been as severe. When Kennedy was shot, O’Donnell was in the follow-up car that contained eight Secret Service agents.

After Kennedy was pronounced dead, O’Donnell broke the news to Vice President and now-President Lyndon B. Johnson and advised him to head back to Washington D.C., to which Johnson complied. O’Donnell was less successful convincing Jackie Kennedy to leave the area after her husband’s death and having Air Force One head back to the nation’s capital before local officials could intervene.

O’Donnell served in the Johnson administration for two years. After he stepped away from the White House, he was president of an eponymously named company, unsuccessfully ran for Massachusetts governor, and coordinated several more presidential and gubernatorial campaigns.[8]

Dave Powers had served in the Air Force during the Second World War. One year after the war ended, while babysitting his sister’s children, John Kennedy asked Powers to help him with his first Congressional campaign. Powers accepted and was a fixture in every political campaign of John’s after that. When Kennedy became president, he named Powers his special assistant. Sometimes, Kennedy had Powers act as his surrogate, such as a meeting with a 4H club in South Carolina and a football team from Massachusetts that came to the White House.

On November 22, 1963, Powers was in the car that contained O’Donnell and the eight other Secret Service agents. After the assassination, and at the request of Robert F. Kennedy, Powers took the first steps at creating what is now the John F. Kennedy Presidential Library and Museum. He also served as its first curator and was actively involved in worldwide efforts to raise funds for it.[9]

Forrest Sorrels had started his Secret Service career as a clerk. Years later, after overseeing several presidential trips to Dallas and the surrounding region, he was named director of the agency’s Dallas office. In this capacity, Sorrels worked in tandem with others to coordinate President Kennedy’s itinerary for that November trip.

Sorrels had no ominous feelings when he and the other passengers in the lead car passed the Texas School Book Depository moments before the gunfire that killed President Kennedy sounded. Upon the shots being fired, his auditory and visual clues made him think the shots came from a direction different than the depository. About a half-hour after the motorcade arrived at Parkland Hospital. On his way back to the assassination site, he heard police radio reports suggesting the shots came from the depository. Thus, he headed in that direction. Before he could talk to many people at that location, a reporter introduced him to Abraham Zapruder, the clothing manufacturer who had captured the assassination on film.

After Sorrels took steps to ensure the Zapruder film would be developed, he learned of Oswald’s arrest and headed to the police station to learn what he could from him and about him. Sorrels spent most of the next few days at the Dallas Police Department, acting as a liaison between authorities in Washington, D.C., and Texas. He even questioned Jack Ruby after Ruby shot and killed Oswald.

Sorrels retired from the Secret Service in 1969 after nearly a half-century of work for the agency.[10]