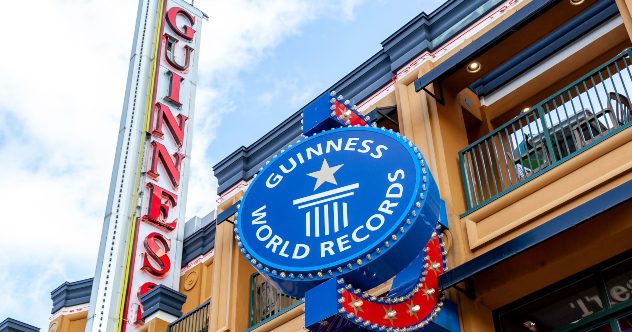 Unless you’ve been living under a rock since before the 1950s, you’ve heard of The Guinness Book of World Records. It is the most authoritative source for world records of all kinds. The guidelines for submitting a world record are relatively loose.

Technically speaking, anybody can apply for almost any record, as long as it meets the established guidelines. If a person submits an entry for a new record, the record must be (a) measurable, (b) breakable, (c) standardizable, (d) verifiable, (e) one variable, (f) universal, and (g) substantially different from another record.

Other than this, anybody can submit just about anything as a World Record, leaving the door wide open for a few, shall we say, silly ones. Your fifteen minutes of fame may only be a matter of minutes and an application form away. Here are ten of the most pointless world records attempted by mankind.

Picture this: You’re out and about, maybe on a casual stroll, when you come to a pole. It’s your only bridge and, if you can’t cross it, you’re stuck. In addition to having to cross a pole, that pole is also greased. It happens all the time, obviously, so here’s to the guy to cross the greased pole faster than anybody else.

Antonio Papa broke the record in the spring of 2016 when he crossed a pole slicked with grease in 3.09 seconds. This native Italian beat out the record’s previous holder, Joe DaSilva, from the USA. DaSilva had made his messy impression on the world of pole crossing back in 2012 on the show, Guinness World Records Gone Wild! But it looks like there’s a new Papa in town.

In case you thought you saw the most tattooed person at work last week at Hot Topic, here’s someone to measure that against. We’re talking about the most tattooed man in the world. Getting inked up is no easy task, especially since your skin can be pierced up to 3000 times per minute by a tattoo machine.

But Luck Diamond has tattoos covering his entire body. That’s right, even his eyelids, his ear lobes, his… well, you get the idea. As a tattoo artist himself, you could say he wears his work on his sleeve. He’s also a sword swallower and juggling performer. But no street act is quite as entertaining as seeing someone with every inch of their body inked. How’d he do it? Like anybody else, I suppose… one tat at a time.

Collecting is all about finding something unique and expressing yourself, right? Well, Gerda Scheurs has over $100,000 worth of Smurfs in her home. Just imagine how much Gargamel (the classic Smurf nemesis) would do for that pile of cash. And with all those blue faces staring at her, Scheurs will never live alone. Apparently, there’s a Smurf collection community online, in case you’re interested. That sounds like one very Smurfy hobby to me.

7 Most…”Flesh Tunnels” in the Face

If the term “flesh tunnels” is disturbing to you, I don’t exactly suggest watching this video. But if you’re curious, the record-holder for the most flesh tunnels in your face is James Goss from the UK. Flesh tunnels are body piercings in a tube shape. They’re sometimes called expanders, eyelets, or gauges. Goss beat the previous record-holder from Germany, Joel Miggler, last year. He says he found Miggler interesting and was inspired to take it a few flesh tunnels further. You could say he stretched himself.

6 Most Almonds Consumed in One Minute

It might sound pointless to try to consume more almonds than anyone else in a 60-second period, and I suppose it is. Leah Shutkever, however, decided it was well worth her time to go for the record. It’s hard to say how many people have sat down and attempted to eat the most almonds, but perhaps you’ll be inspired after seeing this story. Perhaps it would be more difficult if you added some spice to the almonds, but all you have to do to beat this record is sit down with a bag of almonds and try to eat more than 40 in a minute—set in Oct 2021. Be warned, though. Shutkever is an expert. She’s a professional speed eater who apparently holds several world records related to this strangely pointless talent, though I guess the almonds do sort of have a point…

As of November 20th, Kevin Strahle, otherwise known as “L.A. Beast,” broke the record for the longest distance walked over LEGO pieces. The distance was 3,886.2 m (12,750 ft). If you skip to the end of the video, you’ll see the toll the walk took on his feet. When will this skill come into play in his everyday life? I’m not sure, but at least if he ever has kids, he’ll be able to handle whatever is waiting for him on their unkempt bedroom floor.

It’s not over ’till the fat lady sings. But when does she stop singing? Since the beginning of musical theater, Sopranos have been fighting about who can hold the longest continual note. (No, we’re not talking about the Italian mafia TV series, but these singers can be just as ruthless).

So how long can you hold a note? Try one minute and fifty-two seconds. According to the Guinness Book of World Records, the current titleholder is Richard Fink IV. Just like Celine Dion’s heart, this song will go on, and on, and on…

3 Most Times Folding That Paper

It’s the ultimate question: do you fold or wad? While this video shows toilet paper folding, there are record holders for all kinds of paper out there. One young woman from California, Britney Gallivan, broke the record for folding printer paper. Her high school teacher told her that paper couldn’t possibly be folded more than a few times. Gallivan was able to make it to twelve before she folded (pun intended).

The moral of the story is this—don’t believe everything your teacher tells you. You just might prove the theories wrong and become the proud owner of a totally meaningless world record.

2 Most Objects in a Beard

The COVID-19 pandemic led to a lot of guys deciding to see how long they could grow their facial hair before it drove their significant others to madness. For some, it was a show of masculinity. But for others, a bushy beard just wasn’t enough.

Why not take beard growing a step further by using that beard to break a world record?

Joel Strasser decided to try just that, though not all just because of a pandemic. His record-breaking beard will be sticking around a while longer. He has several records pertaining to how many of each object he can shove in his beard. Here are a few of the beard-related records he holds:

If you want to get a little extra festive this year, here’s one to try. I wonder how many ornaments Santa Claus stuffs in his beard each year to entertain the elves. Strasser says these feats are about architectural understanding and technique. He stacks the objects in a particular way, so they stay in the beard. Otherwise, he says, they would simply fall to the floor.

In addition, Strasser advises hanging onto the straws if you attempt that one. He doesn’t want you killing any sea turtles, apparently. It’s both an admirable concern and an impressive bearded feat.

1 Fastest Time to Eat a Burrito

A half an hour for lunch never seems quite long enough for a workday, does it? You’ve barely had three bites of your PB&J before it’s time to push a few more pencils. Well, 35.26 seconds is all Leah needs for her lunch break. That’s right—Leah Schutkever has made the list again.

In addition to those almonds, she takes a very fast lunch break, apparently, requiring only 35.26 seconds to down an entire burrito. Her goal when attempting this feat was to beat 40 seconds. It was achieved in 2019 and has yet to be beaten. I’m betting the bathroom break took longer than the actual burrito eating.