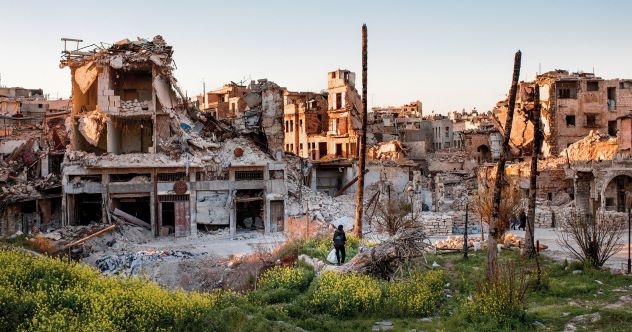 Every minute, five hundred hours of video are uploaded to YouTube, making it the most saturated market since Starbucks opened a store on seemingly every block in Manhattan. Travel-themed YouTube channels are not so much a niche as a big gaping hole with an “Everybody Welcome!” sign, meaning some travel YouTubers are now venturing into dangerous territory to bring in the clicks.

From crime-infested ghettoes to breakaway states, here are ten insane places that only a lunatic would go—or somebody who puts views above all else.

This Russian-speaking British adventurer is no stranger to a walk on the wild side, having made videos in the Sahara, Sinaloa, and Bolivia. But it is the former Soviet Union where his heart lies. Journeys in Belarus and war-torn Ukraine have been well-received by his three million subscribers. Though his visits to the more dangerous provinces of Russia—like Dagestan and the neighboring Chechnya—really demonstrate what an utterly fearless traveler he is.

In a place most sane travelers would take all costs to avoid, Bald and Bankrupt (or Benjamin Rich, as he is otherwise known) stumbles sleepily off the train, lets loose a typically British “Crikey!” at the cold temperature, and then meanders happily along a puddle-drenched gravel road, aiming for what he vaguely hopes is the center of town. There is not an insurgent in sight as he explores the winding gorges of Chechnya with his taxi driver and newfound friend, Ruslan.

What might be presented by more clickbait-prone YouTubers as a scary place is instead shown to be a land of stunning beauty and warm characters. Even having to exit the car at a Russian military checkpoint is dealt with as just another mini-escapade, with his driver exclaiming, “You offered to pay more for every adventure!”[1]

When it comes to a traveler whose video titles often contain the phrase “most dangerous hood,” it can prove difficult to choose just the one. However, in this video, the young South African is seen in his most vulnerable position yet. He is alone atop a hill in the shantytown Rímac ghetto of northern Lima, having wandered through near-deserted and rundown streets where concerned voices warn him he will be robbed, or worse.

Indeed, the moment almost comes—a shady tuk-tuk driver that takes him to the summit seems very keen on making hushed phone calls while insisting that he stay. And a suspicious encounter Kurt has on the barren side of the hill afterward suggests his instinct not to linger was right.[2]

Arriving on a cargo ship from Nigeria, the local police in Tiko, Cameroon, immediately insist on sending them over the border to Nigeria, a place considered much safer. Despite a “mass shooting” by a rebel movement just a few hundred meters away, Peter chooses to stay.

What follows is a three-day stay on a ship in the port followed by a heart-racing midnight run organized by the Czech embassy toward the safer French-speaking region of Cameroon. For a man that has suffered several bouts of food poisoning and one case of life-threatening malaria, you might think he would take such danger in his stride. But even Peter, intrepid traveler though he is, says it’s the most afraid he has ever been in his life.[3]

If you’ve watched the news at all in the last twenty years, you’ll have noticed that Afghanistan isn’t really the sort of place to find itself at the top of anyone’s bucket list. Ravaged by decades of war and daily violence, this central-Asian country is rarely portrayed as anything other than that. That is until Indigo Traveler made this video in 2019, a journalistic piece that successfully manages to avoid exploitation while still depicting the daily struggles that Afghan people face in the northern city of Mazar.

Interviews with various market sellers show a human side that is all-too-often missing from the daily news coverage. A particularly harrowing visit to a UNICEF nutrition clinic allows us to see some of the crucial work being done before the return of the Taliban. What is most commendable, though, is Indigo Traveler’s willingness to reduce his own screen time to give time to those he interviews.[4]

Having the highest murder rate in the world doesn’t lend itself well to tourist figures, which is why El Salvador is one of the least-visited countries in Latin America. It is a nation plagued by tragic, violent crime, political corruption, and street gangs.

Watching this video, you wouldn’t know any of that, with Alex’s itinerary including a quaint market, a microbrewery, and—showing that they really do exist in every corner of the world—an Irish pub where she watches a Nirvana tribute band. As any good travel YouTuber does, Alex manages to paint a different picture of a country where the news stories are not always positive.[5]

There are plenty of Chernobyl videos on YouTube nowadays, particularly in the wake of the hit HBO series. But what separates Shiey’s videos from the rest is the fact that he is not supposed to be there. Arriving with two friends after an all-night trek through abandoned Ukrainian villages, forests, and deep rivers, Shiey shows the side of the exclusion zone that most tourists never see.

While avoiding the regular security patrols, they explore a series of dilapidated buildings and even spend the night sleeping in an empty apartment. The most unsettling moment, though, comes when the fearless Shiey climbs high up the Duga radar installation, a giant Soviet-era contraption that stands at almost 500 feet. There are debates to be had about the ethics of such a trip, but there’s no denying that it makes for compulsive viewing.[6]

We once thought of Somalia solely as the war-torn and violent land depicted in the movie Black Hawk Down. More recently, that image of Somalia has been replaced in the collective consciousness as a land of pirates, given recent events of ship hijackings in the Gulf of Aden. However, Drew Binsky brings us a third, far more vibrant picture of Somalia.

There are contrasting images of rundown buildings next to colorful ice-cream parlors, armed militias parading past white sandy beaches, modern hotels and the barriers built to protect them from terrorist attacks. It’s certainly not a city you could call safe, but with its bustling markets and cheerful citizens, it’s perhaps not the place we had in mind, either.[7]

The dilapidated neighborhoods of Detroit might not be the most dangerous place in the world, but by American standards, they rank highly. They are notorious for gang crime and rife with extreme poverty, and they are rarely the setting for a YouTube travel video.

In a series dedicated to exploring the more deprived areas of inner-city America, Charlie Bo shows us a place we’d otherwise never dare venture. This video does lack the personal touch found in other videos in this list as he records while driving around in his car. However, given the reputation of the area he’s visiting, it’s quite understandable.[8]

2 The Door to Hell, Turkmenistan—Fearless & Far

It may not really be a portal to the underworld, but as a massive pit of perpetually burning fire, it might as well be. The Darvaza gas crater has been burning since the 1970s and is ranked second in Tripadvisor’s list of things to do in Turkmenistan, which in itself says a lot about this mysterious country.

Ruled over by an authoritarian dictator with his own personality cult, this central Asian country can be difficult to get into, especially if you have any journalistic intentions. Mike Corey, the creator behind this channel, takes full advantage of his travel permit and shows some incredible footage of Turkmenistan, including a pristine white capital city constructed almost entirely out of marble. But it is this video where he roasts marshmallows over the least likely of campfires that really captures the imagination.[9]

Nowadays, we think of Syria as a place that people are trying to flee rather than get into. Not so for Jacob Laukaitis, a Lithuanian filmmaker with a penchant for making videos that get under the skin of countries that most of us wouldn’t dream of visiting. Between conversations with the locals and sweeping shots of the stunning Syrian landscape, Jacob includes short and informative snippets that detail the events of the Syrian civil war.

This is a no-holds-barred account of the nation, and the video takes us from the surprising realities of modern life in Damascus to the horrific scenes of Aleppo. From the fancy coffee shops and shopping malls of the capital, the viewer is taken to witness the fallout of the war, where bombed-out buildings and shell-cratered streets are still called home by the surprisingly hopeful residents. This video is an integrative piece of journalism and one that depicts the Syrian people in a warm light in contrast to the negative press coverage they so often face.[10]