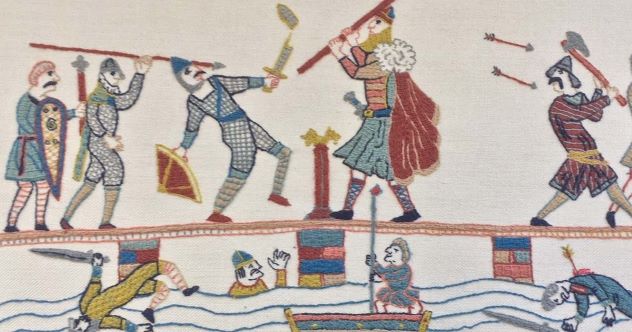 For as long as humans have existed, there has been war. Whether over cultural differences, expansionism, or some other reason, wars have forged empires, destroyed others, consolidated leaders, and changed the course of history. But while we all know about the World Wars and famous revolutions, there are some battles often forgotten, the results of which helped shape our world to what it is today.

Internal conflict and advancing Muslim forces left the state of Georgia in the 11th century with only a minor foothold in the Caucasus, seemingly powerless to stop the Seljuk Turks from destroying them completely. By the time a 16-year-old David (or Davit) IV took the Georgian throne in 1089, the country was paying tribute to the Turks, who had taken their capital.

With the Seljuks turning their attention south to join the Muslim war efforts in the early Crusades, David took the opportunity to stop tribute payments, stepped up his rebuilding efforts, and took back territory from the distracted Turks. Fearing the rise in power of David and the continuation of Christianity in the region, the Seljuks returned with Muslim allies to form an army of around 300,00–500,000, meeting David’s much smaller forces (about 50,000) at the Battle of Didgori in 1121.

Despite being heavily outnumbered, David had a plan: first, he sent a small band of soldiers to the Turks offering to defect, and once inside the enemy camp, they killed the Seljuk leaders, while David attacked their front and flank simultaneously. Without leadership, the Turks fled and were decimated. Not long after, David would recapture Tbilisi and enjoy a string of further victories in the region, establishing a Christian Caucasus and slowing the expansion of the Muslims.[1]

9 The Battle of La Forbie

From 1095, Crusader armies battled with Muslim forces over the Holy Land, forming the Crusader States in the region, known as Outremer, after early successes. However, after much back and forth over five more major Crusades, the 1187 Battle of Hattin saw Salah al-Din’s Ayyubid Caliphate rest control of the Holy Land once more. This battle is perhaps the most famous of the Crusades, but the often overlooked Battle of La Forbie in 1244, sometimes called the Battle of Hiribya, proved more pivotal to history.

By 1244, the Christians had retaken Jerusalem once again, and the advancing Egyptian army, reinforced by tribesmen, stormed the Holy Land to take it back. One reason this battle is largely forgotten is due to details being extremely sparse. What we do know, however, is that the Christians were completely overwhelmed, ousted from the area, and would never again return. Further Crusades would be called to try, but the defeat at La Forbie marked the collapse of Christian influence and power in the region, cementing the Muslim and Arab influence that persists to this day.[2]

8 The Battles of Hakata Bay

The Emperor of the Mongols and the Yuan Dynasty in China, Kublai Khan, sought to expand his territory east in the 13th century, first taking Korea before setting his sights on Japan. The Yuan fleet first arrived in 1274, after initial demands were ignored by the Japanese, with this first encounter known as the First Battle of Hakata Bay.

Japan’s defense force was heavily outnumbered and had no answers to the Yuan’s gunpowder, retreating to a fortress for their final stand. However, a freak storm came to their rescue, blowing the advancing Yuan fleet back and destroying many of their ships. Back in China, Kublai was undeterred, arranging a second invasion attempt in 1281, known as the Second Battle of Hakata Bay.

Once again, the Japanese were outmatched but saved by Mother Nature when a typhoon swept the Yuan ships away, forcing the remainder to retreat. These defeats served as a limit on the Mongol’s reach, at least in the east, and the two storms of Hakata Bay became known as “divine wind,” or kamikaze, which would be immortalized by Japanese suicide pilots during World War II.[3]

7 The Siege of Baghdad

The Abbasid Caliphate had ruled much of the Middle East since around AD 750. The era considered the Islamic Golden Age generally follows the rise, expansion, and cultural development of the Abbasids and other Muslim states.

However, that all changed when the advancing Mongol Empire arrived at their capital of Baghdad in 1258. The Abbasid Caliph, Al-Musta’sim, refused the Mongols demands, and in return, the Mongols laid siege to Baghdad, bombarding it until the Caliph quickly changed his mind and surrendered. While not a battle per se, the quick and violent interaction between both empires, and the resulting success of the Mongols, would have long-lasting effects.

Firstly, Baghdad’s various historical articles and important documents were looted and burned, the city itself was destroyed, and almost the entire population was killed. Al-Musta’sim was said to be rolled in a carpet and trampled to death by horses (due to the Mongols not believing royal blood should be spilled on the Earth). The downfall of the Abbasid Caliphate, along with the destruction of their capital, is generally marked as the end of the Islamic Golden Age.[4]

6 The Battle of São Mamede

In the 11th century, the entire Iberian Peninsula had changed hands was divided between the Moors in the south and the Visigoths in the north—which consisted of the Kingdoms of León, Castille, and Aragon. At this time, Portugal was merely a county of León, governed by Theresa of León and her husband. But when her husband died, Theresa found herself fighting for control with her son Afonso, who rallied for Portuguese independence.

Tensions culminated in the 1128 Battle of São Mamede. Afonso defeated his mother’s forces and took control of Portugal, going on to defeat the King of León and forge the county’s path to independence. Afonso declared himself king in 1139. After capturing Lisbon and other areas of southern Portugal from Muslim rule, León recognized the county as an independent state, which was ratified by the Pope in 1179. While the battle was merely the first step in a long process, the independence gained at São Mamede would have a significant impact worldwide, with Portugal playing a big part in the early colonization of Africa and South America centuries later.[5]

5 The Battle of Achelous

The Bulgars settled the Balkans in the seventh century, regularly clashing with their Byzantine neighbors. Past their peak, Byzantium still dominated the region, but the rise of the First Bulgarian Empire would certainly challenge that.

The Bulgarian Tsar Simeon, having defeated the Byzantines multiple times over the years, sought to consolidate both empires in marriage, which their old rivals refused. This inevitably led to yet another war in 917, in which both sides met at Achelous. The Byzantines looked to have the battle won, but rumors began circulating in their camp that their commander Leo Phokas had been killed. One story states that having initially pushed Simeon back, Phokas dismounted from his horse to take a drink, but his men simply saw his unmanned horse and assumed the worst.

Simeon noticed the growing panic and disarray among the Byzantine men, stopped his retreat, and launched a counterattack, giving the Byzantines one of their biggest ever defeats. Simeon’s success allowed him to attain the title of Tsar, established Bulgaria as a significant European power, and allowed Christian Bulgaria to remain religiously independent.[6]

4 The Battle of Stamford Bridge

While the year 1066 in England is synonymous with the Battle of Hastings, perhaps an equally significant battle in world history occurred just weeks prior, when the English fought off Viking invaders for the final time at Stamford Bridge, ultimately ending the Viking Age.

With King Harold of England in London awaiting an expected Norman invasion, the Norwegian King Hardrada arrived with his forces at York in 1066 to do the same. Harold marched his troops 185 miles north from London in just four days to meet them, surprising the invaders and quickly decimating them in battle, with King Hardrada being killed.

The victory led to the expulsion of the Vikings, ending their claims to the English crown and significance in Europe as a power. Three weeks later, William the Conqueror invaded from Normandy, much as Harold had anticipated; however, he was now severely weakened. The Normans took advantage and seized the crown, with the defeated Harold the final Anglo-Saxon king of England.[7]

3 The Siege and Fall of Tenochtitlan

While Cortés’s Spanish conquistadors arrived with just 500 men, they quickly laid plans to conquer the Aztec Empire. After slaughtering thousands of unarmed Aztec citizens on their way through the country, the Spanish-led forces (which consisted of many unhappy rival tribes eager to be rid of the Aztecs) arrived at the capital Tenochtitlan and took the Aztec leader Montezuma II hostage. Quickly growing tired of the Spanish and Montezuma’s attempts to placate them, the Aztecs rebelled, and Montezuma was killed, although it is not clear by whom.

After much warfare and more atrocities than can be counted, events culminated in May 1521 when the Spanish laid siege to Tenochtitlan. Cutting off the city for about three months and battering it with cannons, the Aztecs were no match for the Spaniards’ superior weaponry and horses and were forced to surrender. They had already been ravaged by smallpox courtesy of the Spanish, with defeat here marking their ultimate demise and the rise of Spain’s American colonization project.[8]

2 The Battle of Shanhai Pass

Ruling China from 1368, the Ming dynasty was on the decline by the 17th century. A combination of natural disasters and incompetent rulers left the country in ruins, which all served as the motivation for others to rise against them.

By 1644, pockets of unrest had formed all over the country, and a group of rebels under the command of Li Zicheng stormed Beijing, taking the capital. The Ming Emperor, powerless to resist, committed suicide. But the Ming commanders refused to acknowledge or deal with Li and instead turned to the Manchu people (the Jin Dynasty, in northeast China) for assistance.

The Manchu responded, heading to Shanhai Pass (a gate at the Great Wall) a month after Beijing fell, where Li’s forces formed to meet them. But they were duly thumped. The result of this battle proved significant, with the victorious Manchus pouring into the country to assume control, install themselves as rulers, and rename their dynasty Qing. They would go on to rule for 300 years and would be the last dynasty of Imperial China.[9]

1 The Battle of Zenta

For several centuries, the Ottoman Empire was the major force of Europe and the Middle East, filling the gap left by the Byzantines and stretching Muslim influence well into Christian Europe. The Holy League of nations, led by the Habsburg Empire (Austria), was formed in the 17th century to try and stop the previously unchecked dominance of the Ottomans.

Having recently taken much of Hungary and now pushing further north, the Battle for Vienna in 1683 saw the Ottoman’s first major defeat in Europe and is considered as the beginning of their decline. But it was at the Battle of Zenta that the Turks would be pushed back for good, allowing Austria to establish itself as a major European power.

In 1697, the League’s forces ambushed the Ottomans while they forded a river on their way to take Zenta (in modern-day Serbia). In the panic, many Ottoman troops drowned while attempting to flee, and many more were wiped out in the battle itself. The Ottomans had been crushed, and the Treaty of Karlowitz quickly followed, curtailing their ambitions in Europe and forcing them to cede large portions of Europe in the process.[10]