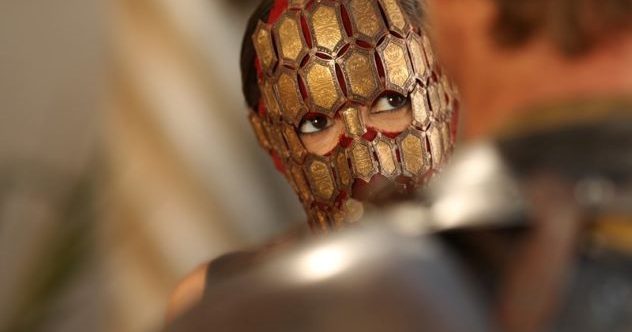 Have you ever had a conversation with your friends about an awesome film, TV show, or childhood cartoon? How often is the talk about the hero? About the torrid love affair or the “will they, won’t they?” between the two main characters? What about the most hateable villains or the funniest series regular? Pretty often, probably.

But we mustn’t forget that there are tons of small roles that can help elevate a scene, a film, or even a series to classic status. Even in some sucky IPs, there can be some small, memorable performance that sticks with the viewer. Here’s a list that shows appreciation for some of the more incidental characters that were elevated by the able actors who brought them to the screen.

Where would we be without your average working schlub? One thing is for certain, a whole building’s worth of rent-dodging, coffee-swilling, intra-dating, unfeasibly attractive twenty-somethings in the late ’90s/early ’00s would soon succumb to carbon monoxide poisoning or die under the rubble of their collapsed rent-controlled brownstone. Not so schlubby now, are they? One character given fairer treatment than most “working-class” archetypes in comedy is the superintendent of the building that the friends live in, Mr. Treeger.

He isn’t generically “street smart” or a simple “diamond in the rough” or any other patronizing stereotype. Treeger is just a working guy who knows his stuff and does his job. He can be tough and goofy, mean and kind, surly and have a tender side—the revelation that he enjoys ballroom dancing with Matt LeBlanc’s Joey Tribbiani, his impromptu practice partner, is a surprisingly touching, decently written episode—”The One with the Ballroom Dancing.”[1]

Now to a slightly less funny depiction of a working-class New Yorker.

When pressed to help with Travis Bickle’s growing unease at society and provide some real wisdom, he retreats into trite aphorisms, culminating in just telling the future rampage killer to “go out, get laid, get drunk, do anything” and that:

His character’s non-advice would have rendered him a 2D scene filler were it not for one line, perfectly delivered, that really underscores the visceral futility in the movie: “It’s not Bertrand Russell, but what do you want? I’m a cabbie, y’know? What do I know?” Boyle’s assured performance helps turn DeNiro’s iconic anti-hero from a cartoonish monster into the very embodiment of broken mental states and outsider rage at society.[2]

This is an interesting case of a character that was underrated by those writing the show she was in. in George RR Martin’s expansive fantasy universe, the character of Quaithe adds intrigue and a mystical air. She hails from the far-away city of Ashai, a place steeped in dark legends (a ghostly glowing river, mask-wearing denizens competent in forms of eldritch magic, the whole place built in the mysterious oily black stone—a motif inspired by the cosmic horror works of HP Lovecraft).

Quaithe shares visions and portents with the prospective queen of Westeros, Daenerys Targaryen, popping in and out of her life like a ghost. And that ghost-like quality may be fitting—not only does it denote a sense of otherworldliness, but it allows for speculation that she may be a long-lived relative from centuries past, a fallen Targaryen who knows what’s coming around the pike for her family.

Yeah, that’s not what we get in the show. She turns up, says some kooky stuff. And that was that.[3]

Characters like this are vital to create the audience introspection that classic TV series demand. And there is no greater classic than The Sopranos. Charmaine is wife to Artie Bucco, the chef and owner of Vesuvio. The restaurant is a regular haunt for the members of North Jersey’s Soprano crime family. Tony Soprano is Artie’s childhood best friend. He feels a constant draw into that world (but has nowhere near the street smarts or the hard edge required), constantly thinking of himself as an extension of that world. He lives vicariously enough through the ballbusting and the stories to even consider working with the mafiosos at certain junctures in the series.

But then there’s his wife. Katherine Narducci’s Charmaine is very Jersey. She’s very loud. Very expressive. And very much opposed to the criminal lifestyle of her main customers. Her wry, hostile attitude reminds her husband (and us) of exactly who these people are—charming, lovable, funny murderous thugs and pimps who kill as easily as they finish plates of gabagool.[4]

Beloved by millions as the film that defines their childhood, Willy Wonka and the Chocolate Factory not only delighted children all over the world but also freaked them out to the point of persistent nightmares. The “Boat Trip” scene is enough on its own to cause nightly bed-wettings.

Worse still for the nervous systems of the pre-pubescent is the creepy owner of a competing chocolate company, Wonka’s arch-rival, Arthur Slugworth. He makes Charlie an offer, asking the boy to commit an act of industrial espionage (a mission Charlie refuses, thus allowing him to inherit the factory. Wonka orchestrates this whole ruse for, uh, reasons. Psychopathic reasons.) For all the kookiness and creepiness, all the whimsy and wonder, Slugworth helps ground a filmic vision that could have meandered off into “too-fuzzy-to-be-good” territory. German actor Günter Meisner brings some Teutonic steeliness to this faux antagonist, leaving weak-willed and naughty children in his wake like some corporate pied piper.[5]

Right, Tolkeinologists, in light of the upcoming nightmare that will drip from Bezos’s spite glands, let’s talk about an imperfect but much more faithful screen adaptation of J.R.R’s opus. Where would Middle Earth be if not for a comparatively unsung hero? In some pretty deep Mordorish crap, that’s where!

Éomer, Marshal of the Mark in the kingdom of Rohan, is the real martial brains behind the survival of the world of Men.

But the real sign of (movie) Éomer’s badassery comes in the scene where he warns the remaining members of the fellowship to leave Rohan, lest they succumb to the same fate as his King. Actor Karl Urban, on mounting his horse but before exuding pure loss with the line “Look for your friends, but do not trust to hope,” lets his sword slip from its scabbard. This unintended blooper only serves to add to his character’s hard edge. This dude doesn’t even need a sword (Seriously, watch the clip!).[6]

Take Santos and Pasquel, two throwaway characters that Peter Griffin hires to work on his fishing boat (remember that? Peter was a fisherman for a bit in the 3rd season). They were Portuguese. That’s how many humorless people perceived the gag. Non-English-speaking characters interact with monolingual American; we see the translation. Ha.

Not exactly. Their lives, expounded upon through their conversations, reveal a very different pair of men from how Peter perceives them. They are normal, intelligent guys. One was even a cardiologist back on the Iberian Peninsula. Now, due to the language barrier, they are forced into menial labor on an imbecile’s boat. That’s a lot of character complexity and arc spread across a few scenes and a clutch of lines.[7]

If you are from the geographically larger, brasher, slightly more oil-rich side of the pond, you may very well never have heard of this Irish sitcom. Everyone in Ireland has. Hell, everyone in Britain has! Amid a whole slew of memorable guest spots, all actors portraying increasingly absurd, eccentric characters (mainly priests, all leveling wonderfully satirical jibes at late ’90s Irish culture), Father Larry Duff should get more love.

Used as a throwaway slapstick gag once every few episodes, this unlucky priest’s travails are hilarious. Every time he is in a high-risk situation, he gets a phone call from Ted, the eponymous protagonist of this sitcom. Every time Duff, played by Tony Guilfoyle, is called by Craggy Island’s resident priest, the call itself causes some violent mishap. Ted then realizes he’s been told not to call him for whatever reason, unknowingly having injured his friend. Simple but memorable.[8]

How do you turn a run-of-the-mill, in-almost-every-crime-based-action-movie heist scene into a work of cinematic beauty? Add Heath Ledger’s Joker. How do you set the tone for what may still be the best (true) Superhero movie of the new millennium? Make sure your ancillary characters seem as 3D as possible.

What type of guy would be the manager of a bank that mainly does business with the mob? The baddest badass, that’s who. When he bursts out of his cubicle office in the palatial downtown Gotham bank building, riding the powder of his shotgun’s blast, the viewer gets the sense that the robbers have bitten off more than they can chew here. Only a new type of criminal could take on this mobbed-up, “old money” sort of guy.

Unfortunately for Gotham’s underworld, that’s exactly who the Joker is. Left with a mouthful of smoke-spewing explosives of some sort and let off with the severing of the Joker’s jacket thread, this scene not only sets the mood for the film but also for superhero blockbusters for the next few years. Smart and entertaining, the whole film would have suffered if not for the performance of this humble/sociopathic bank manager.[9]

As with the opening scene of The Dark Knight, 2005’s neo-noir adaptation of Frank Miller’s classic comic series Sin City has the quintessential mood-setting opening chapter. A dark cityscape lies beyond the rooftop of an American city. A beautiful woman in a ballgown strikes up a conversation with a tall, dark stranger as the score of doleful sax music sets the mood beyond the scene. He lights a cigarette for her. He tells her things about her that seem to reach deep into her soul. He makes her promises and reassures her that he can make her life better. He tells her he loves her.

He shoots her in the stomach. Then tells us that he’ll “cash her check in the morning.” Did she pay him, a last dramatic flight of fancy and some kind words before her life ends? Then the movie starts. Wow.

The only issue with this character, brought to life by a beautifully smooth turn by Hartnett, is that we don’t get to see this enigmatic character again until the very end of the movie.[9]

And now for a bonus character!

A minor henchman antagonist from a cartoon? Why on earth would this screech-voiced, generic character make a list like this? I mean, how could the writing for a short-lived 1980s science fantasy, Hasbro-owned toy tie-in cartoon produce a good character?

The scene that every person who has ever felt frustrated in a work meeting/classroom/waiting in line at customer service dreams about. After the show’s main antagonist, Darkstorm, refuses to share some of the plundered treasure with his fellow baddies, Cravex (member of the show’s evil faction, The Darkling Lords) just flips out. He smacks every other member of this gang of evildoers, castigating them based on their character flaws…except for Cindarr, who gets smacked just “out of principle!” This otherwise forgettable character shows us that even those with minimal personality can sometimes hit a nerve. All while viewers shout, “YES! Take that, Jeremy, you don’t even run the IT department, ya jerk!” at their screen.[11]