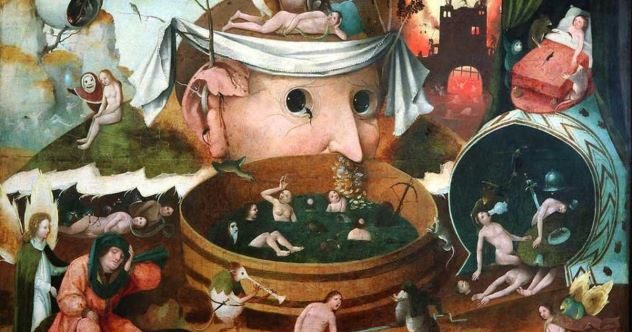 Although people sometimes think of “art” as only or primarily the visual arts, fine arts are much more varied. According to The Dictionary of Cultural Literacy, they include not only painting and drawing but also “sculpture, literature, architecture, drama, music, dance, opera, and television and movies.”

It is in this broad sense of the meaning of the term that the artists on this list are included. Each of them, whether a painter, a novelist, or a poet, is not only famous but also shares the rather surprising experience of having had one or more of their works inspired by a hallucination.

Dr. Jean Kim believes Yayoi Kusama’s art teaches us how to live. The Japanese painter’s work features polka dots, the trademark theme she developed when she was 10 years old, and incorporates imagery from the hallucinations that the artist experiences.

Kim describes Kusama’s art as a mixture of abstract expressionism and conceptual art characterized by its graphic, colorful, and somewhat futuristic images. Kim cites the artist’s Infinity Rooms as an example: “These rooms are small self-contained mirror chambers, allowing the viewer to simultaneously lose one’s identity and sense of self in the infinity of a repeated image evoking the universe.” She adds the paintings capture the reality of selfies, which have become increasingly popular in recent years, as they’ve been distributed rapidly far and wide via social media.

Kusama’s art also helps the artist herself cope with, and even transcend, her mental illness. Kim points out that although not specifically diagnosed, it is consistent with psychosis and possible schizophrenia. While marked by hallucinations and “the disintegration of one’s sense of self and identity, leading to anxiety and paranoia.” Kusama’s art is therapeutic, allowing the painter to reconsolidate the fear of disintegration that the artist experiences.[1]

In 1935, French existential philosopher, novelist, and playwright Jean-Paul Sartre (1905-1980) decided to take a trip—a very special kind of trip. He prevailed upon his friend, Daniel Lagache, a medical doctor, to punch his ticket, so to speak, by injecting his patient with mescaline, which was used at the time to treat alcoholism and depression.

As a result, Sartre experienced a “bad trip.” Writer Emily Zarevich describes some of the more salient features of Sartre’s mind-blowing adventure. Not only did bizarre, frightening crustaceans pursue him wherever he went, but ordinary objects transformed themselves into animals, “his clock [becoming] an owl, his umbrella to a vulture.”

Sartre’s adventure ended with a mental breakdown. Part of his campaign of redemption that followed included his consultation with famed psychoanalyst Jacques Lacan. After that, Sartre understood that the crabs that had pursued him symbolized the philosopher’s fear of being alone. Although he was able to rid himself, intermittently, of the crustaceans that haunted him, the crabs reappeared in Sartre’s experimental and ground-breaking 1938 novel La Nausée (Nausea). In the book, readers are treated to a ludicrous sex scene in which the main character daydreams he’s trapped in a garden full of insects and animals walking crab-style.[2]

8 Shapes on the Ceiling

Despite his eventual fame, Joan Miro (1893-1983) was once a starving artist. The surrealist painter himself explained the way that he conceived the subjects of his art. Janis Mink summarizes his process in her book, Miro. Upon returning to his Paris studio at night, he would go to bed sometimes without supper, where he would see things, including shapes on the ceiling, before jotting them down in a notebook. Sometimes, the sights were “remembered dreams” from his unrestful sleep; other times, they were images seen in “hallucinations caused by hunger.”

Although Miro might appear to have sufficient funds for necessities and “trips back and forth to Spain,” he was actually impoverished. His hunger, though, like the “ether, cocaine, alcohol, morphine, or sex” that his colleagues employed, helped him to get in touch with his subconscious. This worked out well for Miro, who was too deeply spiritual to destroy his own body and fully enjoyed his own connection to nature. His 1925 painting, The Birth of the World, quickly attained fame.[3]

Edvard Munch (1863-1944), who, according to Dr. Albert Rothenberg, may have had bipolar disorder with psychosis, experienced visual and auditory hallucinations and received psychiatric hospitalization in 1908.

Munch himself explains the origin of his celebrated, if dark and disturbing, painting The Scream (1893): “I was walking along the road with two of my friends. Then the sun set. The sky suddenly turned into blood, and I felt something akin to a touch of melancholy. I stood still, leaned against the railing, dead tired. Above the blue black fjord and city hung clouds of dripping, rippling blood. My friends went on again. I stood, frightened, with an open wound in my breast. A great scream pierced through nature.”

The experience, clearly a visual hallucination, was creatively transformed by Munch in several phases over a period of eighteen months into a work of art. Five preliminary sketches in the Munch Museum in Oslo, Norway, show changes in the position of the painting’s lone figure, resulting in the subjects being turned to face the viewer and being visually integrated with the scene. The successive changes show how Munch’s artistry transformed his hallucination into a significant and meaningful portrait of an emotional state of mind and reflected the artist’s own healthy creative processes.[4]

An autoscopic hallucination is the perception of one’s own body or a part of it as existing separately and externally to the self. This type of hallucination occurred in conjunction with meningitis, seizures, space-occupying lesions, brain tumors, migraine, delirium, and post-traumatic brain lesions.

The Russian novelist Feodor (also spelled “Fyodor” and “Fjodor”) Dostoevsky (1821-1881) was regarded as an abnormally high-strung personality and suffered from an unknown ailment that made him subject to hallucinations. Even as a child, he had auditory hallucinations. Once, while hiking through a forest, he heard a voice warn that a wolf was loose. As Joseph Frank recounts in Dostoevsky: The Seeds of Revolt 1821-1849, as an adult, the novelist confided, he had become the victim of some sort of strange and unbearably torturing nervous illness that he called “mystic terror.” For a time, the novelist was convinced that someone who snored shared his bed. He had other hallucinations as well.

In fact, the second Mr. Golyadkin featured in the novel The Double may have been inspired by an autoscopic hallucination experienced by Dostoevsky himself. In any case, it is clear Dostoevsky’s “first-hand acquaintance with hallucinatory phenomena and his exceptional talent” allowed Dostoevsky to verbalize and analyze such experiences.[5]

His characters experience similar conditions and hallucinations, including insomnia, sleep promotion, hypnagogic hallucinations, perhaps the first report of restless legs syndrome, sleep paralysis, dreams, nightmares, terror, and drowsiness. One example of Dickens’s literary depiction of a hypnagogic hallucination appears in A Christmas Carol, as Ebenezer Scrooge is visited by four ghosts, leaving Scrooge unsure whether they are a dream or reality. A second example is that of Oliver Twist, who, when he falls asleep, “sees his enemies, Monks and Fagin, apparently in an episode of dream-reality confusion.”[6]

4 Archangels and the Face of God

At age four, the poet, painter, and printmaker William Blake (1757-1827) saw God’s face through a window of the child’s house. About six years later, he said he saw a tree full of angels, their “bright angelic wings bespangling every bough like stars.” Later, archangels would dictate poetry to him and infuse the themes of his visual art. Blake’s hallucinations, which occurred again and again throughout his life, also included audible voices—those of his dead brother, to whom he spoke every day, and of angels.

A retroactive diagnosis of Blake suggests that he may have suffered from bipolar disorder or temporal lobe epilepsy. This latter condition could explain his seeing “ecstatic aurae,” such as those that typically indicate the presence of deities or angels in paintings and drawings.[7]

Swift (1667-1745) experienced symptoms akin to those of Ménière’s disease, including cognitive changes, memory impairment, personality alterations, language disorder, and facial paralysis during the last three years of his life. And it is thought that the novel’s gigantic inhabitants of Brobdingnag and tiny people of Lilliput are based on Swift’s own visual hallucinations.[8]

2 Hallucinations of the Sane

Whoever has seen The Garden of Earthly Delights must have wondered what, besides the fervent religious beliefs of Hieronymus Bosch (c. 1450s-1516), inspired the paintings. To say that they are bizarre and perverse characterizes the triptych in relatively mild terms.

Strange architecture, part floral and part stone; hybrid creatures; nude men and women performing acrobatics or sexual acts or riding horses, camels, mules, boars, bulls, and unicorns; huge fruits; lovers trapped inside clam shells, transparent floral bodies, and glass tubes; flowers in strange places—these are only some of the surreal images in the central panel of the triptych, which shows scenes of an earthly paradise awash in lust, preceding the even-worse pictures reserved for the right panel’s depiction of hell.

Roger Blench, author of “The hallucinatory Hieronymus Bosch: Charles Bonnet syndrome?” briefly assesses the possibility that Bosch’s imagery is related to episodes of Charles Bonnet Syndrome [CBS], aka “hallucinations of the sane.” Although Blench dismisses attempts to pigeonhole Bosch according to any one interpretation, he also suggests that there is evidence to see the artist’s work as Bosch’s own hallucinations transferred to canvas framed in an iconography acceptable to his era. According to this interpretation, Bosch wanted to express his paintings’ themes in at least an ostensibly Roman Catholic worldview that could be viewed as doctrinal, if unusual.[9]

In Dante Alighieri (c. 1265-1321), we meet a poet whose work is nearly as strange and surreal, if not as obscure, as Bosch’s Garden. It wouldn’t be surprising to find that Dante’s epic depiction of the poet’s journey through hell (The Inferno), purgatory (Purgatorio), and heaven (Paradiso) was based, at least in part, on the poet’s own hallucinations. Indeed, such may very well have been the case, as it has been theorized the author may have had narcolepsy.

In The Divine Comedy, the poet Dante references his fictional counterpart’s sleep, weariness, dreams, and, as Dante himself writes, “rested eyes.” These allusions are explained as indications that the actual Dante suffered from both narcolepsy and catalepsy. The former is a neurological disorder. It interferes with the body’s regulation of sleep-wake cycles, causing sleepiness during the day and the tendency to nap for brief periods during waking hours. The latter condition causes muscular rigidity and unresponsiveness to the stimuli of the objective world.

The fictional Dante’s entire journey through hell, purgatory, and heaven is marked by sudden wake-dreaming transitions, short and refreshing naps, visions and hallucinations, unconscious behaviors, episodes of muscle weakness, and falls which are always triggered by strong emotions. The evidence that Dante is writing from experience about the hallucinations implied by his poetry is there in The Divine Comedy itself, in the behavior of its protagonist, the fictional Dante.[10]