The Victorian era saw hundreds of vast buildings spring up across the UK, Europe, and North America as governments sought to address the “epidemic” of madness that appeared to be growing in lockstep with the industrialization of the western world. The agreed solution was to build immense institutions run under strict regimes and isolated from the rest of the community.

Urban sprawl eventually surrounded many of the old asylums. By the 1960s, it was decided they would need to be wound down and closed, “releasing” their patients back into the community whether appropriate housing and care had been arranged for them or not.

While scant consideration was given to patients, alternate uses for the buildings themselves were rarely considered either. So hundreds of well-built, often astoundingly beautiful, historic structures were left to rot and face eventual demolition. Here is a handful of those that found other fates besides the wrecking ball.

The original Bethlehem Priory was founded in Bishopsgate in 1247 and used to house “mad” patients since as early as 1377. A brand new version of the institution (by then commonly known as “Bedlam” was built at Moorfields in 1676 and designed by the eminent scientist and architect (as well as great rival of Sir Isaac Newton) Robert Hooke (1635–1703).

The third version, known as “Royal Bethlem,” opened at Southwark in 1815 and was the largest of all, housing up to 425 patients at any one time. It also initially confined all of Britain’s “criminal lunatics.” Bedlam was notorious throughout its history as a place of cruelty and suffering, although by the 1860s, it had begun housing only fee-paying middle-class patients.

Today: Closing in 1930, the former “lunatic palace” is—with unavoidable irony—now the London home of the Imperial War Museum, documenting the history of warfare and conflict, which typifies mankind’s madness at its most extreme and destructive.[1] 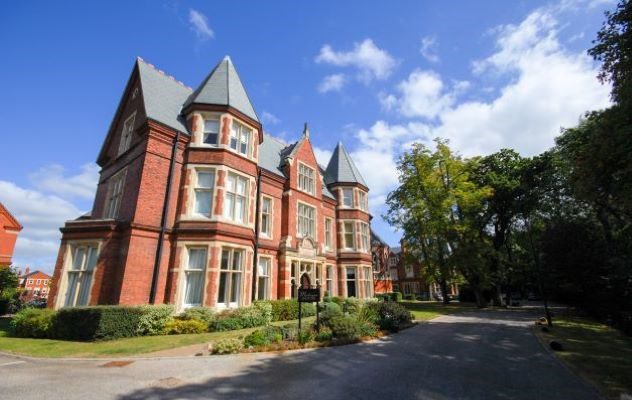 Built as the Fourth London County Asylum at Woodford, Essex, Claybury was the largest of all British asylums in terms of its overall footprint. It housed around 2,740 patients at its peak.

It was designed by George T. Hine (1842–1916), who was responsible for the building of more asylums than any other architect; he exclusively created asylums for the whole of his career. Fifteen across the UK are attributed to him, with extensions or additions made to five more.

Today: This immense building, which was once secured and surrounded by railings to keep its pauper patients inside, closed in 1997 and is now a gated community. Its wards are now converted to housing, its chapel is now a swimming pool, and its lavish recreation hall is now a gym. It is among the most desirable locations on the outskirts of London and, besides the still rather exclusive gym, is closed off to the public, meaning that these days, the paupers are all locked outside its grounds instead.[2]

Its first medical superintendent, Dr. James Munson (1848–1902), oversaw the asylum’s regime for its first 39 years (retiring at the age of 76). He believed that the patients being within beautiful surroundings with plenty to keep them occupied was the key to wellbeing and recovery. He also abolished the use of straitjackets and other forms of restraint.

Today: Frustratingly, the asylum’s beautiful Italiante central block—the most handsome part—was allowed to fall into disrepair and be demolished in 1963, while the remainder closed in 1989. A $60,000,000 redevelopment program began in 2000, with the remaining 1880s buildings and extensive grounds renovated to a mix of residential, shopping, catering, hotel, and conference facilities.[3]

The Lincoln Lunatic Asylum, later the Lawn, was a charitable public asylum that opened in 1820 at the center of the ancient town, next to its huge castle and overlooked by its cathedral. When the church’s main tower was completed in 1311, it was the only structure in the world taller than the Great Pyramid of Giza.

The Lawn took patients on a charitable basis, meaning most did not have to pay at all. It had a good reputation, inspired by its first visiting medical physician, Dr. Edward Parker Charlesworth (1783–1853). Charlesworth insisted that mechanical restraints (bindings, cuffs, straitjackets, etc.) were abolished and that violence and physical coercion should never be used upon the patients, which was then a controversial approach.

Today: The Lawn closed in 1982 and was later used by the local council. It is now a conference center and coffee shop, with its grounds open as a public park.[4]

Nottingham was progressive during Georgian times when medicine for the poor was usually left to unqualified quacks and questionable herbal remedies. It built its general public hospital as early as 1781 and opened the very first of Britain’s “county asylums” at Sneinton in 1812.

As its first asylum became grossly overcrowded, middle-class patients were moved to new accommodations at The Coppice in 1859. However, as Nottingham continued to grow into a large industrial city, Sneinton again became overcrowded, with the much larger Mapperley Asylum eventually built in 1880. This, too, was full by the end of its first year and soon expanded.

During the 1950s, Mapperley’s superintendent, Dr. Duncan MacMillan, reclassified all the chronic (long-term) patients as “voluntary.” Instead of assuming rehabilitation for them was impossible, as was the case at most asylums, he encouraged confidence-building and their integration back into society. No new patients were allowed to be shut away in the dingy old chronic wards, and the doors to all wards were gradually kept unlocked.

Today: Closing in 1994, half of the old buildings are now converted to luxury housing, while the northern side is still in NHS use as the University of Nottingham Medical School. There is also a large medium-security forensic unit built within the grounds.[5] 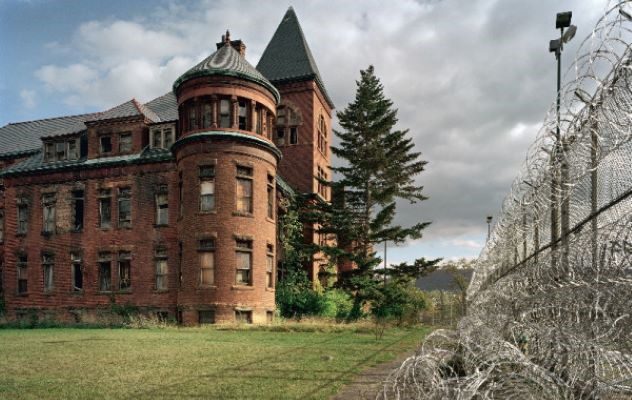 Located in pleasant surroundings between the Hudson River and Fishkill Mountains, Matteawan opened in 1892 and catered for various classes of mental health problems. It also incorporated a significant quota of those then labeled as “criminally insane.”

Its most famous patient to fall under that category was George Metesky, aka the “Mad Bomber.” He terrorized New York with homemade explosives planted in public locations from the 1940s until his arrest in 1957. Perhaps surprisingly, he was released just sixteen years later, in 1973.

Today: The role of Matteawan evolved from the 1970s into what is now Fishkill Correctional Facility, which still uses the old asylum buildings to house a mix of high-security and medium-security psychiatric patients. It also operates a minimum security work-release program for those undergoing rehabilitation.[6] 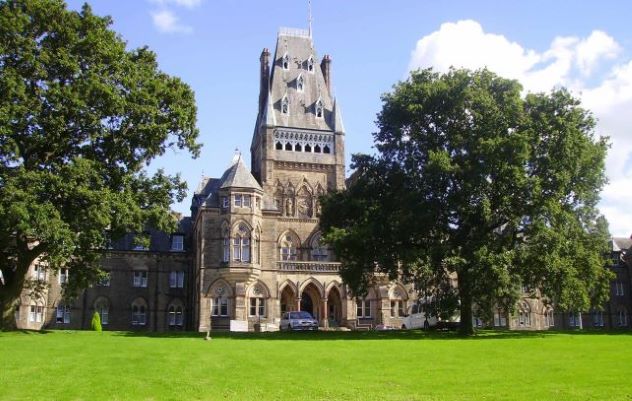 The first “idiot asylum” was founded in Surrey by John Langdon Down (1828–1896), who first described the syndrome that now bears his name. It was then formally known as “idiocy.” Langdon Down created an asylum designed to house, educate, and support people with learning differences to live productive lives beyond its walls.

Similar institutions appeared in the west, east, and midlands of England, and Royal Albert was originally known as the Northern Counties Idiot Asylum, designed in an extravagant Flemish style in 1870. It would initially house 500 children between six and fifteen years of age for up to seven years each before they were “ready” to use their skills in the outside world.

These high ideals were gradually lost over time; by 1948, its population had swelled to over 800, 35% of whom were aged over thirty-five and considered long-stay cases.

Today: The building closed in 1996 and was converted to the Jamea Al Kauthar Islamic College, a private Islamic boarding school for girls aged eleven to eighteen.[7]

Buffalo State hospital opened in 1880 and was designed by Henry Hobson Richardson (1838–1886), who went on to be widely regarded as the first American architect to achieve international renown. It was designed in the Kirkbride style, which saw staggered sets of ward blocks spreading out from the central administrative block rather like the wings of a bird in flight.

Buffalo was arguably the most impressive of all the American asylums, with its incredibly imposing gothic towers looming down from the enormous central block like something from a dark fairytale.

Today: Despite the addition to the State and National Registers of Historic Places in 1973 and designated an official National Historic Landmark in 1986 (one of only seven in Western New York), it sat empty and neglected for years. A lawsuit eventually forced state authorities into proactively pursuing its renovation. The Hotel Henry (named after its architect) occupied the central third of the complex but closed in 2021 but fortunately reopened as The Richardson Hotel. Tours are available of the remaining abandoned areas of the old asylum, with an expectation they will eventually become apartments and offices.[8]

Glenside opened in 1861 as the Bristol City Lunatic Asylum, built to a corridor-pavilion layout typical of its time.

Its first departure from psychiatric use was during WWI when it became the Beaufort War Hospital. During the war, 29,434 wounded soldiers were treated there, while all its psychiatric patients were sent home or decanted into other asylums. When the patients returned in 1919, they included one Elsie Leach, mother of the actor Cary Grant.

Today: The buildings were modernized and converted into residence halls and training areas for the UWE Faculty of Health and Social Care, with its grand recreation hall, adapted into a cafeteria. It is a rare example of a former hospital building finding a genuinely fitting new use that makes the best of the existing buildings rather than lazy demolition and/or partial conversion to housing. The former chapel now hosts a museum packed with information and objects about Glenside’s long history as an asylum and war hospital.[9]

Dymphna was born in Ireland to a wealthy family in the 7th century and sunk into depression after the death of her mother. Her father mourned, too, his advisers eventually suggesting he remarry to overcome his pain. He sent emissaries across Europe, who returned claiming they could find none so delightful and suitable as… his own daughter, Dymphna.

Unsurprisingly horrified, she fled to the continent, accompanied by a priest, the court jester, and his wife. They traveled to Antwerp in modern-day Belgium and settled in the small village of Gheel. Dymphna’s father pursued her and executed the priest when he tried to defend her, and when she continued to resist, he murdered Dymphna, his own fifteen-year-old daughter. She was martyred, becoming Saint Dymphna in around AD 650.

Miracles and cures were said to occur for those suffering from mental health problems who visited Gheel, and so St. Dymphna became the patron saint of the mad, with increasing numbers then brought to the village by friends and relatives. At first, patients were housed in a small asylum building attached to the church built in St Dymphna’s honor. But they were eventually accommodated in the homes of ordinary families living in Gheel.

Today: Remarkably, although the original buildings are gone, the system at Geel (formerly Gheel) remains very similar to this day. While most other western countries (including the rest of Belgium) adopted a similar model of placing patients in vast out-of-town institutions away from the general populace, Gheel families continue to provide similar care to patients with mental disorders. Some families have been doing so for many generations, and it has become as normal and accepted as any other practice handed down through a family line.[10]