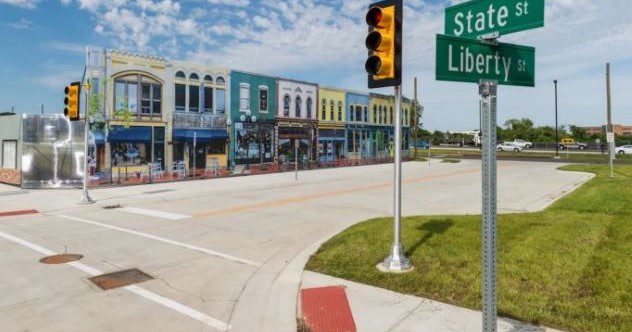 As the story goes, in 1787, Catherine the Great embarked on a trip to view her newly conquered land of Crimea. Catherine’s lover, and the guy responsible for bringing Crimea into the Russian Empire, Grigory Potemkin, wanted to impress his mistress. But the land was in poverty and ruin. According to legend, Grigory, not wanting to disappoint Catherine, decided to build attractive-looking, yet fake, villages all along her route.

Grigory ordered freshly painted building facades erected. One herd of animals was transported along the way to make it appear the countryside was teeming with livestock, bags of wheat actually filled with sand were presented, and peasants were told to stand along the road with smiles plastered on their faces.

Supposedly Catherine passed by the show without any idea she was being duped, and the term “Potemkin village” was born. Historians have since debunked the myth as an over-exaggeration. However, the term stuck, and Potemkin villages are what we call these fake cities designed to look like real places.

Let’s take a look at ten of the most fascinating Potemkin villages in history.

Viewed from afar, the North Korean village of Kijong-dong looks like any other town. Built in the 1950s in the Demilitarized Zone (DMZ) that separates North from South Korea, it appears to be a regular town filled with well-kept residential buildings. However, a closer look reveals the windows have no glass, lights are on timers, and the only people around are maintenance workers.

The village is a complete fake. Nobody lives there. It exists solely for propaganda. Its purpose is to make North Korea appear to be a charming and prosperous place to live. And if anyone had any doubts, the city blasts anti-Western hype (along with Communist operas and marching music) on speakers loud enough to reach the nearby South Korean town of Daesong-dong. The propaganda is played 20 hours per day in the hope villagers from South Korea will defect to the north. So far, the method hasn’t worked.[1]

It’s a good thing Doom Town is a fake place because who would want to live in a city named Doom? In the 1950s, during the Cold War, Nevada was an extremely popular place to test nuclear weapons. It’s estimated the U.S. government tested nearly a thousand atomic weapons in the desert so close to Las Vegas that the mushroom clouds could be spotted from the Vegas strip and became an unlikely tourist attraction for people who were blissfully unaware of radiation poisoning.

To see what would happen to a real town if an atomic bomb were dropped on it, scientists created fake towns to drop the test bombs. They built real houses, furnished them, stocked them with actual food, parked cars along streets, and populated the area with clothed mannequins. The idea was to find out what might survive a nuclear blast. The answer turned out to be… not very much.[2]

During World War II, the U.S. government created a fake town on the West Coast over the top of a Boeing warplane factory. Boeing Plant 2, otherwise known as Boeing Wonderland, was built to disguise the factory from potential Japanese bombers. The Seattle factory was not the only one. Numerous fake towns were built, including one in Burbank, California, that protected the Lockheed plant.

Because these SoCal plants were near Hollywood and the country was full of patriotism for the war effort, the government had no trouble obtaining the best movie set designers and large-scale painters to create fake houses, sidewalks, fences, trees, and cars. From the sky, it appeared to be a real neighborhood. But in reality, the buildings were four to six feet tall, the trees were made from burlap and chicken wire, and greenery was painted on actual runways. The designers were so detailed they even painted some of the “yards” brown to make it appear the grass hadn’t been watered.[3]

This next entry is a terribly dark and sad one. Theresienstadt was a concentration camp run by the Germans during World War II. Designed to hold Jews as they waited to be deported to other killing centers and forced labor camps, the living conditions were terrible, and the people lived in constant fear of deportation.

Under pressure, the Nazis allowed the International Red Cross to pay a visit to the camp in June 1944. However, similar to Grigory’s legendary fake towns put on for Catherine the Great, a facade was created to disguise the dreadful ghetto conditions that lay underneath. Before the visit, thousands were deported to Auschwitz to reduce overcrowding, houses were painted, and gardens were planted. Once the visit was over, the good times ended, and conditions resumed as they had been.

In perhaps the most deplorable propaganda of all, the Nazis used a film of the dressing up of Theresienstadt to describe it as a “spa town” where elderly Jews could safely “retire.”[4]

In the 1950s, the U.S. government researched liquid hydrogen as a means of fueling aircraft. This was during the Cold War with the USSR, and the U.S. wanted to keep their projects top secret, especially from the Soviets. Project Suntan was the code name given for the super secret mission of building a spy plane powered by liquid hydrogen.

But how to hide such a massive project as building liquid hydrogen-operated planes? You guessed it. Build a Potemkin village. The government made up a phony town named Apix, an acronym for “Air Products Incorporated, Experimental,” and chose a remote and swampy area in Palm Beach County. They even gave the town a fake population and plotted the land for residential development. Today, there is little information about the fictional town of Apix, although it occasionally appears on a map. Only a railroad signal box remains with the name Apix on it.[5]

During World War I, France wanted to create a phony version of Paris to fool German bombers. Paris was a prime target for Germany, and Zeppelins were regularly sent to bomb the city. French officials decided the best defense was to divert the Zeppelin pilots flying overhead at night by offering up a faux city to trick the pilots.

Though radar existed, it wasn’t advanced enough to be useful. All the French had to do was create a pretend city near Paris that looked like the real thing from above. The French designed the phony version just north of the real deal, complete with electric lights, replica buildings, and a train station. There was even a bogus Champs-Elysées.

We will never know if France’s Potemkin village would have worked to save Parisian lives. The war ended before it was complete, and now, only photos remain of the pretend city of lights.[6]

Tourists visiting Shanghai might be surprised to learn there is a replica Dutch town complete with a windmill sitting in the middle of an industrial area in Shanghai. The town was designed to appear as if someone is walking along quaint cobblestone streets in a charming Dutch village—even though it’s located in Shanghai.

Holland Town was part of Shanghai’s One City, Nine Towns initiative. Each town was given a theme and designed to look like a city from a different foreign country. The goal of the project was to develop suburban districts throughout Shanghai to ease overcrowding.

However, these towns did not all prove to be popular living areas for the locals, and tourists visiting Shanghai tended to want to see Asian-themed architecture, restaurants, and attractions, not replicas of cities they may have come from. Only six of the planned villages were built, and like Holland Village, they sat mostly empty, used mainly for couples stopping by for wedding photo shoots. Fortunately, Holland Village has gained some traction and now houses many locals.[7]

How do you test a driverless car? Self-driving cars need to be prepared for all kinds of unpredictable situations, like icy roads, pedestrians crossing the street, and other drivers. Yet, testing autonomous cars in the populated areas they are meant to be driving in could be dangerous. How else do you determine how the cars will perform in real-life situations?

The auto industry has come up with a solution. Build a fake town that recreates a regular American city. Mcity is a testing ground in Michigan used by car companies such as Honda, Toyota, Nissan, Ford, and General Motors to test self-driving cars. It’s a fake city built with real streets, intersections, traffic lights, road signs, parking meters, and even a railroad crossing. And though we know it exists, and we know car companies use it for testing, it’s still pretty secretive as public demonstrations and visits are generally not allowed.[8]

Fort Irwin is an army base located in the Mojave Desert. It’s a very large army base, about the size of Rhode Island, and it’s where U.S. soldiers spend a 21-day rotation at the National Training Center. While there, soldiers will visit the fake village of Ertebat Shar to get familiar with what it’s like to operate in an Afghan village.

The pretend village is a replica of an Afghan town populated with actors selling fake bread and meat along the streets. The town was designed using satellite imagery of Baghdad to get the accuracy of the width of actual streets. Though it may look real while you’re walking around in it, from above, it’s plain to see the village is an illusion. A view from the sky shows the buildings are facades held up by wooden frames.[9]

The final entry is not a replica town or test site, nor does it exist for propaganda. It’s a paper town or trap town, and it was designed by map makers to catch plagiarists in the act of copying maps.

The city of Agloe was invented by map makers from America’s General Drafting Company to catch competitors who copied their maps. The imaginary town later showed up on a map by Rand McNally. Of course, General Drafting cried plagiarism. But McNally declared Agloe must exist, as there was a business located on the spot bearing the name, Agloe.

Sure enough, the Agloe General Store had been built at the fake location of the made-up town. The owner had seen Agloe on the map and decided to set up shop, despite the complete absence of houses or businesses in the area. Hence, a completely fabricated city became somewhat real, at least for a little while.[10]